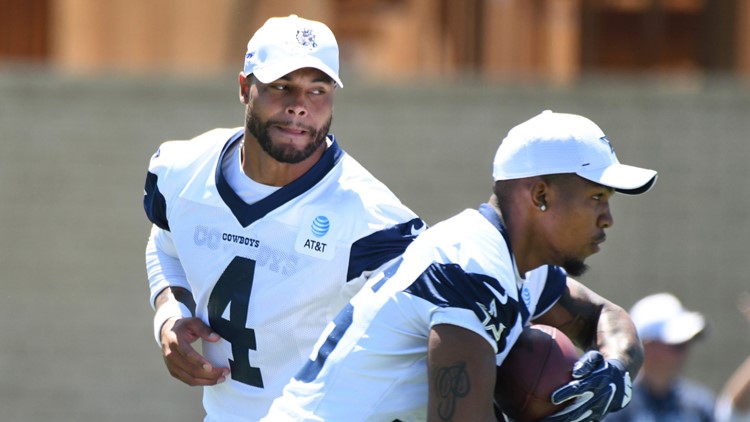 DALLAS — In the NFL, there are talented players at each position. Sometimes, the opportunity to prove the worth of that talent is extremely limited due to the reps starters and players in the higher realms of the depth chart take.

However, with Dallas Cowboys running back Ezekiel Elliott absent at training camp in Oxnard, Calif., due to a holdout, there are more reps to go around for running backs Darius Jackson, Tony Pollard, Mike Weber, and Jordan Chunn.

The more reps means more opportunities for down roster players such as Chunn and Weber to compete against a fourth-round pick in Pollard and a known quantity in Jackson, who Dallas selected in the sixth round of the 2016 NFL draft.

What Dallas coach Jason Garrett and the rest of the staff, including running backs coach Gary Brown, are looking for out of their four backs while Elliott is away is who responds well to the competition.

"We’re asking our guys to come out here and compete every day," Garrett told reporters Sunday. "We try to keep the reps as equitable as we can at the start of the training camp to make sure the ones, the twos and the threes are all getting almost equal amount of work over the course of practice, again to see guys, create competition and see how they respond to it."

So far, Pollard has responded to Elliott's holdout by seeing it as a chance to have more reps and find his niche when the organization ultimately trims the 90-man roster down to 53 on Sept. 1.

"I'm just trying to establish myself on the team and just make a name for myself and make the most of my opportunities," Pollard told reporters Sunday after a morning walkthrough.

The Cowboys' approach to evaluating the running back position absent of Elliott has been about seeing how Jackson, Pollard, Weber, and Chunn react to the initial plan and the different situations the coaches throw them into.

"I think like at any position, you might have an initial plan on the first day and then you watch what goes on," said Garrett. "A position like that, where no one has that much experience, you just want to see each of them in a lot of different environments. We’ll mix it up. We’re certainly not getting too involved in the depth chart at any position right now. Obviously we have some established players who will take the first reps and all of that."

Jackson may have the most familiarity with the team as a former draft pick, but he finished his rookie season with the Cleveland Browns, where he also spent the 2017 season. In 2018, the former Eastern Michigan product spent all training camp and preseason with the Cowboys before being cut during the team's finalization of the roster. After spending the first month of the season with the Green Bay Packers, Jackson returned to Dallas.

Chunn is an undrafted Troy Trojan from 2018 who spent his season on the practice squad. Similarly, Weber is a seventh-round pick from Ohio State. Like Pollard, he is a rookie and learning the ropes of the NFL.

"We have a pretty solid group of running backs, a variety of guys who can do different things," Pollard said.

Regardless of their abilities, the lack of experience puts a premium on the reps they get. The longer Elliott holds out, the longer the backs behind him have to hold on to their opportunities to be the top running back in the drill or get the coveted reps on the first team.

Do you think Ezekiel Elliott will return to the team before the preseason or will Dallas have to work out a new extension for him to make his presence felt? Share your thoughts on Zeke's absence with Mark on Twitter @therealmarklane.