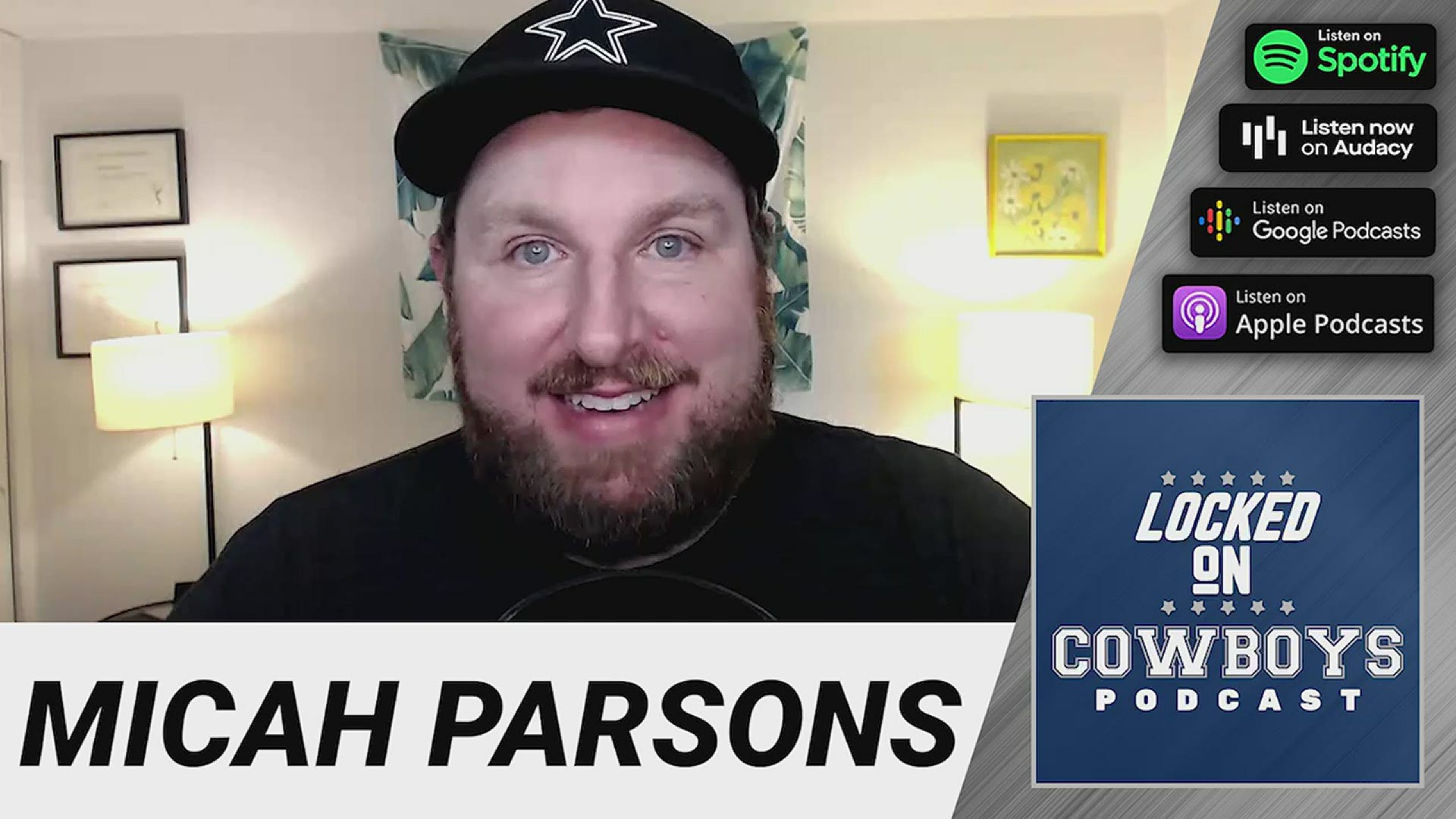 DALLAS — When the Dallas Cowboys take a player whose family are big fans of the team, and the player counts himself among them his entire life, the expectation is that the player understands the luster of the blue star.

The Cowboys have drafted a lot of "fans" in the first round since their last Super Bowl win at the end of the 1995 season. The Cowboys haven't even sniffed a Super Bowl berth as that season was also the last year that they even played in the NFC Championship Game.

2017 first-round defensive end Taco Charlton blended into the background of championship futility, and injuries-marred the promise 2012 cornerback Morris Claiborne could have brought to the team.

In that span, the Steelers have won two Super Bowls to tie them with the New England Patriots for the most in NFL history with six, and even the hard-luck Eagles found Lombardi Trophy glory with a victory over the Patriots in Super Bowl LII at the end of the 2017 season.

Micah Parsons says his parents are #Cowboys fans. Says to keep your head up through all trials and tribulations and keep believing in God. pic.twitter.com/BMvR3vGmrX

No one needs to be reminded who else joins Dallas in the Super Bowl win drought column, let alone the conference title game drought. In case you're new here, only the Cincinnati Bengals (1988), Cleveland Browns (1989), Detroit Lions (1991), and Washington (1991) have not appeared in the NFL's final four for longer than Dallas. In addition, the Houston Texans have never appeared in a conference title game since their 2002 expansion season.

Needless to say, it has been a long time.

Playing for the Cowboys as a fan, meeting owner Jerry Jones, seeing Dak Prescott in the locker room, and having access to The Star in Frisco, and playing at AT&T Stadium may be the biggest thrill a fan could ever have. Parsons needs to guard against these idle pleasures and remember the heartache and embarrassment of being a Dallas fan for the last 25 years. In Parsons' case, born May 26, 1999, he has never seen Dallas get one game away from the Super Bowl.

When he was eight, they choked away a No. 1 seed in the 2007 NFC divisional playoffs, becoming the first NFC team to do so since the 1990 playoff reformatting.

When Parsons was 17, Aaron Rodgers beat the Cowboys, again, a No. 1 seed, at AT&T Stadium to face the Atlanta Falcons in the NFC Championship Game.

In the same span from the last time that the Cowboys appeared in a conference title game, the Patriots became the gold standard for postseason excellence. The Minnesota Vikings made four different NFC Championship Game appearances (1998, 2000, 2009, 2017) with four different quarterbacks (Randall Cunningham, Daunte Culpepper, Brett Favre, Case Keenum). Former laughing stocks like the New Orleans Saints have become the class of the NFC.

A lot of patina has collected on the blue star. Parsons needs to recall his family's admiration for how brightly the blue star used to shine. At AT&T Stadium, all of the pictures before the Joneses bought the team in 1989 are in black-and-white. Similarly, Parsons has to see all of Cowboys history to this point as black-and-white. Only his play, his leadership, and his desire to be great can possibly help to restore brighter days to the Cowboys.

"Micah is a dynamic player," McCarthy said after Round 1 on April 29. "Clearly, when you watch him play he is a multi-positional player. He obviously can play on the ball as a linebacker. He has natural pass-rush skills – that is something that we talked about the last 10 days as we prepared for what would go on after pick seven in this draft.

"Playing off the ball, he is an impact rusher, inside and outside. He can play in the bubble, play behind the three-technique. He gives us a lot of flexibility to line up with the other linebackers. He is a dynamic, pressure player, and he is definitely going to make an impact for us on defense.”

When you can't stop the run, teams are making high percentage passes.

But Micah Parsons is just a bag of saline. Unless Dallas works on the delivery system, the jab, he's not going to replenish the need. https://t.co/JcNJ5USUvl

Cowboys fans will be thrilled that he loves the team as much as they do. Now, they hope that he has the same fire to see them win as they have held for the last 25 years.

In football there is a 24-hour rule for players and coaches to enjoy a win. When the 25th hour hits, it's back to work. Parsons and his family of Cowboys fans should relish and soak up the blessing of being a part of their favorite team.

Football families across the country are thrilled just for their loved ones to get drafted, let alone get the opportunity to play for their favorite teams. However, Parsons needs to not bask in the glitz for too long and prepare to start scrubbing away the grime that has dimmed the blue star.

What grade would you give the Dallas Cowboys for their selection of Micah Parsons in the first round? Share your marks with Mark on Twitter @therealmarklane.