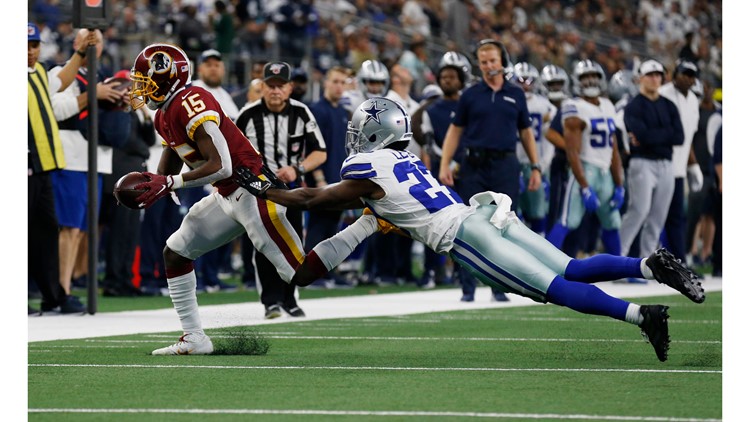 Cowboys fans got teased for a while, but ultimately see their season end

DALLAS — It was actually an interesting afternoon of football, and there was some intrigue this Sunday -- which is more than we really thought coming into the day.  But ultimately, the Dallas Cowboys' season ended today, despite their comfortable win over Washington.

The Philadelphia Eagles pulled away with a 34-17 win over the New York Giants, to finish the year 9-7, one game clear of the Cowboys in the NFC East.

The Eagles will host a playoff game next weekend, against the second-best team from the NFC West.

Dallas will watch from home.

The Cowboys finished yet another season at 8-8 -- the fourth such campaign of Jason Garrett's tenure. They won all eight games in which they scored 30 or more points.

They lost all eight games in which they failed to score 30. A perfectly mediocre, talented-but-unremarkable football team.

Dak Prescott threw four touchdown passes. Ezekiel Elliott ran for over 100 yards and had a touchdown rushing and receiving. Michael Gallup caught the other three touchdown passes -- two of which were in spectacular fashion. The offense put on an explosive display at AT&T Stadium.

RELATED: Cowboys players react to the possibility of Garrett being gone

All to see their season end 1,500 miles away in East Rutherford, New Jersey.

So much will change for this franchise in the coming months -- the coaching staff will look much different, as Jason Garrett likely won't receive a new contract, and many decisions will need to be made about the remainder of the staff.

Many key players for this franchise over the last several years may not be back. Jason Witten, Byron Jones, Sean Lee, Randall Cobb, Robert Quinn and many others may have just played their last game as Cowboys.

There was a moment, as Saquon Barkley thrust his hand in to the air at the 50-yard line, on his way to the end zone for a game-tying touchdown run in the third quarter, knotting up Philly and New York at 17, where Cowboys fans thought they really had a chance at a miraculous berth in the postseason.

Turns out, he was just teasing Dallas fans. Apropos for this afternoon.