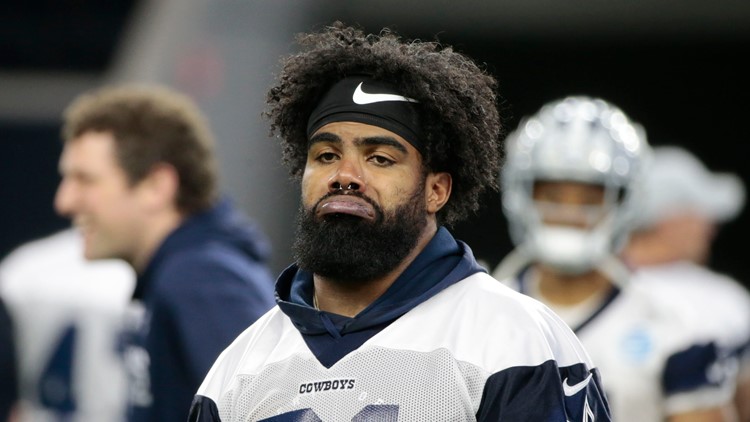 ARLINGTON, Texas — The Dallas Cowboys won't be caught by surprise if they don't have All-Pro running back Ezekiel Elliott in uniform by the time the club hosts the New York Giants Sept. 8 at AT&T Stadium.

Week 1 of the NFL's 100th season is nigh, but a contract extension with the former 2016 first-round pick from Ohio State does not seem to be on the horizon. Nonetheless the Cowboys front office is prepared for life with or without Elliott when they kick off the regular season.

"We’ve been preparing for that," chief operating officer Stephen Jones said Wednesday at the team's annual kickoff luncheon at AT&T Stadium. "That’s why we brought Alfred [Morris] in. As we’ve said, we’ve been so pleasantly surprised, [Tony] Pollard has been even better than we expected. No, we’re very comfortable with what we have there."

In addition to Morris, who has been with the Cowboys every season of the Elliott tenure, save for 2018, and fourth-round rookie Pollard, the Cowboys have rookie Mike Weber from Ohio State along with Jordan Chunn and Darius Jackson. Of course, the latter trio are battling for a spot on the 53-man roster to begin with, and unlike when a player is suspended, Elliott's roster spot during a holdout counts. Dallas won't be able to have a rent-a-player during the holdout, however long it drags.

"We’re comfortable with that group if that’s what it is," Jones said. "Obviously we’re still going to be doing everything we can to do something with Zeke."

If the Cowboys aren't able to work something out with Elliott and the two-time NFL rushing champion misses games, the club will treat it as an injury or a suspension, according to owner, president, and general manager Jerry Jones.

Ultimately, the Cowboys and Elliott have the same goals in mind of No. 21 being with the franchise long-term. The crux of the matter is Elliott wants security while being paid commensurate with the achievements earned and talent demonstrated.

Theoretically, Elliott could wait until the end of the 2021 season to sign a deal with the Cowboys, but there may not be enough salary cap space available as the club is presently negotiating extensions with quarterback Dak Prescott and receiver Amari Cooper with starters cornerback Byron Jones and defensive tackle Maliek Collins also on expiring deals.

"We’re always confident we’re going to get something done," Stephen said. "We’re going to exhaust all resources to try to do it. I know Zeke wants to be here. I know his guys want to try to figure something out. Those things, you just never know until it’s done. We’ll just keep working at it."

Do you think Ezekiel Elliott will be on the field and in the lineup for Week 1 against the Giants? Share your predictions on the outcome of Zeke's holdout with Mark on Twitter @therealmarklane.