Cowboys 100: Facts and stats for Week 13 showdown against Baltimore Ravens

The Dallas Cowboys travel to Baltimore to take on the Ravens in Week 13 where they will be looking for the first win at M&T Bank Stadium in franchise history. 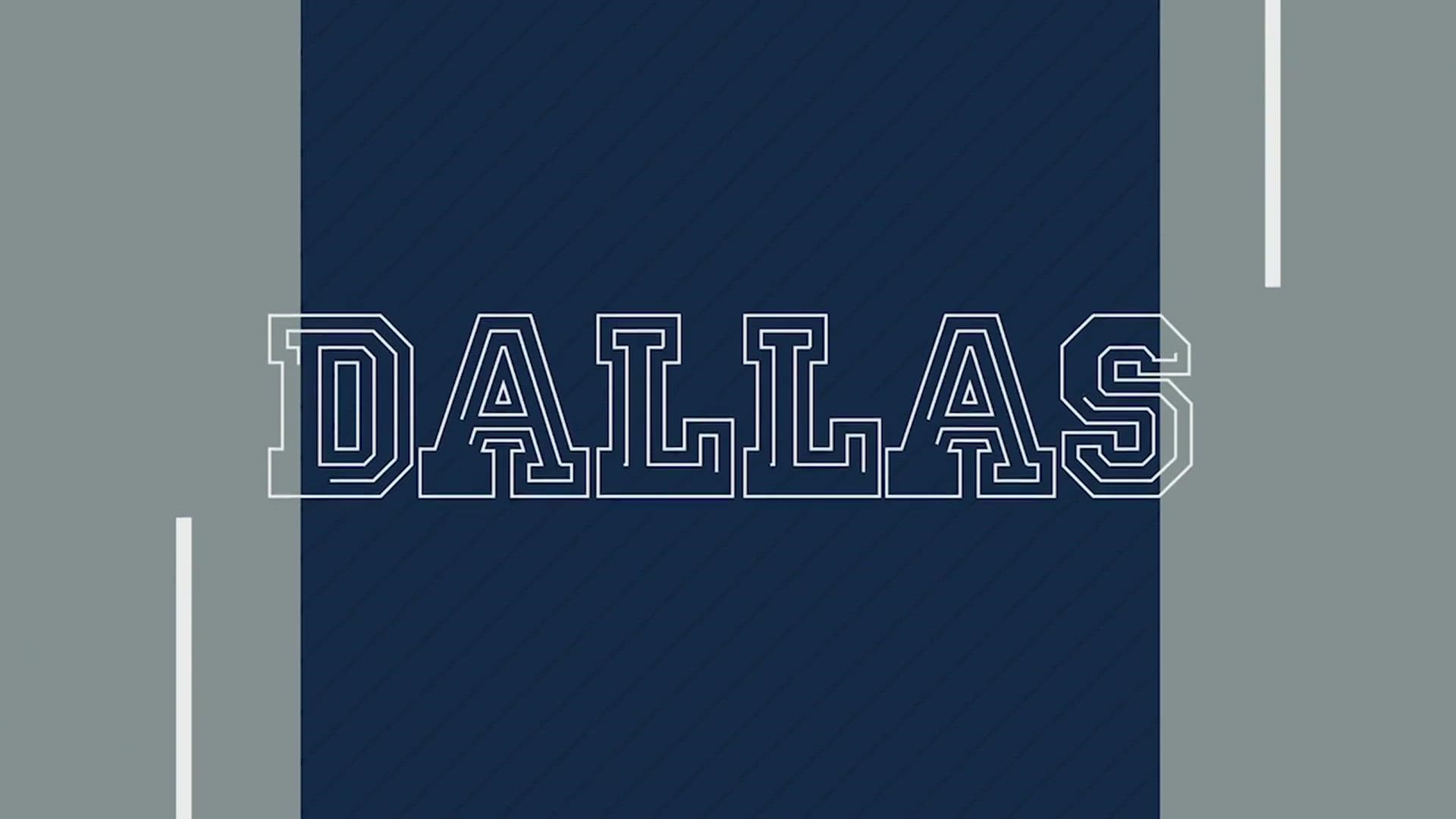 DALLAS — The Dallas Cowboys are coming off a long break following a 41-16 loss to Washington on Thanksgiving in Week 12. The loss dropped Dallas to last place in the NFC East and also severely dented their hopes of bouncing back from their early-season woes to take the division crown.

Week 13 sees Dallas play the Baltimore Ravens on 11 days of rest after Covid concerns moved this matchup to a primetime contest on Tuesday night. The Ravens played as recently as Wednesday, Dec. 2 when they lost 19-14 to the Pittsburgh Steelers.

Here are 100 facts and stats as Dallas looks for a win against the Baltimore Ravens franchise for the first time in Baltimore:

#Cowboys' Jerry Jones tells @1053thefan "believe it or not" the positives outweigh the negatives. Says he's not living a dream world and realizes they've only won three games.

1. The Cowboys are 3-8 for the fifth time in franchise history. None of those previous teams made the playoffs, and all of them produced top-10 picks in the next year’s draft.

4. The Ravens are 6-5 for the sixth time in franchise history. Three of five of those teams made the playoffs, with two of them having won the division (2003, 2018).

6. Since 1990, when playoff formats were last tinkered with, 36 of 124 teams that started 6-6 made the playoffs with 13 of those teams having won the division.

8. Dallas is 0-3 at M&T Bank Stadium. Empower Field at Mile High and Gillette Stadium are the only other active stadiums where the Cowboys have played multiple times and failed to produce a victory.

10. By playing on Tuesday, Friday remains the last day of the week the Ravens have not played a game.

11. The Ravens are the second major Baltimore pro football to play on Tuesday. The Baltimore Colts of the All-American Football Conference (not related to the current Colts franchise) played on Tuesday, Oct. 5, 1948, and lost to the Cleveland Browns 14-10.

RELATED: Keys for the Cowboys to be victorious against the Ravens in Week 13

12. Dalton went 8-8 against the Ravens during his time with the Cincinnati Bengals, his second-best record against an AFC North opponent.

13. Dalton’s 76.6 passer rating against the Ravens is his worst against an AFC North opponent.

14. Dalton’s 18 interceptions against the Ravens are the most against an AFC North opponent.

15. Dalton’s 31 sacks versus the Ravens were actually the fewest he took against an AFC North opponent. The Cleveland Browns produced 36, and the Pittsburgh Steelers generated 37.

16. Dalton has thrown for 4,021 passing yards against the Ravens, tops against AFC North opponents.

17. The Ravens are 1 of 4 teams that Dalton has had a pass target against. The other three are the Minnesota Vikings, Los Angeles Rams, and Tennessee Titans.

21. Dalton is the first Dallas quarterback not named Dak Prescott to make a December start since Kellen Moore on Dec. 27, 2015, at the Buffalo Bills.

RELATED: Dale's Extra Point: Entire NFL season has been a fraud, otherwise Cowboys would be winning

Ravens' QB Lamar Jackson is expected to come off Reserve/COVID19 list and start Tuesday vs. the Dallas Cowboys, per @AdamSchefter

22. Jackson has suffered the eighth-most sacks in the NFL with 24.

23. Jackson’s 24 suffered sacks are already one more than he had throughout all of 2019.

24. Jackson has taken the eighth-most hurries in the league with 40.

25. Jackson has had to scramble out of 30 pass attempts, tied with Patrick Mahomes for the fourth-most in the NFL.

27. Jackson’s 476 passing yards out of run-pass option is the third-highest in the NFL.

28. Jackson’s 322 rushing yards out of the run-pass option are the most in the league.

29. Jackson is one of six quarterbacks who has played at least 10 games and has yet to execute either a game-winning drive or fourth-quarter comeback.

RELATED: Cowboys pleased to see Dez Bryant make a comeback with the Ravens

31. A win would join McCarthy with Jason Garrett as the only Cowboys coaches to beat the Ravens.

32. McCarthy’s 2-1 record against the Ravens is his second-best against an AFC North opponent, including postseason:

33. McCarthy’s 7-9 record against the AFC North is his worst against an AFC division:

34. Though not technically on a Thursday night, McCarthy has a 7-4 record on Thursday Night Football with a 1-3 record on the road.

38. McCarthy is 1-2 with backup quarterbacks in prime time with a 1-1 record on the road.

40. Harbaugh is 2-1 against the Cowboys. Only Brian Billick (2-0) remains undefeated against Dallas through multiple games.

42. Harbaugh is 55-49 against playoff-winning head coaches.

43. Harbaugh has started five different quarterbacks since taking the Ravens job in 2008, the second-most behind Billick’s 12 for most in team history.

45. Harbaugh is the only first-time head coach among the four hired in 2008 to still remain in the NFL, let alone at his original post.

46. Harbaugh is 1 of 9 active Super Bowl-winning coaches in the league and 1 of 7 to still be on the team he won the Super Bowl with.

49. The Ravens are tied with the New York Jets for the fifth-most penalties in the NFL with 72.

50. The Ravens’ 72 penalties are tied with the 2000 team for the 10th-fewest penalties in franchise history.

57. Dallas is 48-54 when Aikman does color commentary for their games.

58. This is the second prime time game in the series:

59. Tuesday night will make the Ravens the most-common AFC North opponent the Cowboys have faced in prime time with two games.

60. The Cowboys are 1-2 when Rogers referees their games:

61. The Cowboys have had fewer penalties than the opposition two out of three times with Rogers:

62. This is the first game the Ravens will get with Rogers as referee.

63. Rogers has the sixth-lowest home team winning percentage this season at .444.

64. Rogers has the third-lowest percentage of home teams having fewer penalties at .333 percent.

65. Rogers’ games average the fourth-most sacks per game with 4.9 per contest.

66. Rogers averages the third-lowest offensive holding calls per game with only 1.2 per contest.

67. The Cowboys are 1 for 2 challenging Rogers. Opponents are 0 for 1. Replay Assistant has not been a factor.

69. Rogers teaches at both Lubbock Christian and Texas Tech in Lubbock, where he resides.

70. Rogers has officiating experience in the SEC and Conference USA.

71. Ravens running back J.K. Dobbins has the fifth-highest yards per carry at 5.3.

72. Though Dobbins has just three broken tackles, his 24.0 yards per broken tackle is the 10th-highest in the league.

73. Cowboys receiver Amari Cooper is tied with Allen Robinson for the eighth-most catches with 71.

74. Cooper and Travis Kelce are tied for the ninth-most targets with 98.

75. Ravens receiver Willie Snead is tied for the 10th-most broken tackles after the catch with seven.

77. Cowboys linebacker Jaylon Smith is tied with Bobby Wagner for the sixth-most combined tackles with 100.

78. The Ravens are tied for the seventh-most takeaways this season with 17.

79. The Cowboys have the second-fewest takeaways in the league with 10.

80. The Ravens’ defense is tied with the Texans for the fewest penalties with 47.

81. Opposing quarterbacks have compiled the third-highest passer rating against the Cowboys defense at 105.1.

82. The Cowboys are tied with the Raiders, Chargers, and Packers for the sixth-fewest tackles for loss with 38.

83. The Cowboys have the fewest pass breakups with 28.

85. Dallas and Houston are tied for the most yards per carry surrendered at 4.9.

86. The Cowboys defense has the seventh-highest red-zone conversion rate at 67.5%.

87. Opponents don’t get into the red zone often against the Ravens defense with just 30 trips, tied with the Los Angeles Rams for the fourth-fewest in the league.

88. The Cowboys defense gives up 49.7% conversions on third down, the third-highest in the NFL.

89. The Ravens defense gives up 35.3% conversions on third down, the third-lowest in the league.

90. Baltimore is tied with the Kansas City Chiefs for the fourth-most missed tackles with 88.

91. The Ravens have generated the sixth-most pressures with 108.

92. The Ravens have blitzed 197 times, the second-most in the NFL. They are first in the NFL at blitz percentage with Baltimore calling a blitz 43.7% of the time.

93. The Cowboys are tied with the Cincinnati Bengals for the eighth-fewest yards after the catch surrendered at 1,158.

94. Dallas begins drives at their own 26.9-yard line, the sixth-worst average starting field position in the league.

95. Baltimore starts drives at their own 31.5-yard line, the fourth-best average starting field position in the NFL.

96. The Cowboys possess the ball for 2:29 per drive, the third-shortest time of possession per drive.

97. Dallas has had 18.5% of their drives end in turnovers, the second-highest rate in the league.

100. The Cowboys have one birthday to celebrate on Dec. 8: David Howard. The former Oregon State Beaver was born in 1961 and was part of the Herschel Walker Trade. Howard played 27 games for the Cowboys from 1989-90.

Did you know that the NFL franchise that Dallas has the lowest winning percentage against is the Baltimore Ravens? Share your favorite facts with Mark on Twitter @therealmarklane.