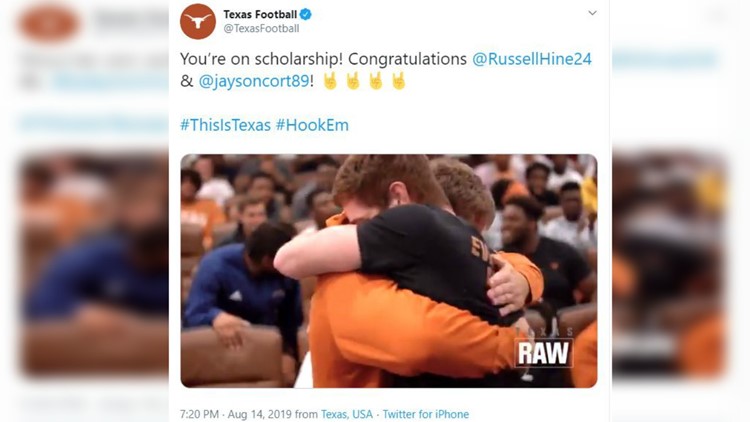 Two Texas Longhorns linebackers shared one of those scholarship reveals that makes every sports fan or former athlete inevitably tear up.

The reveal for Hine and Jaquess was shared on Texas Football's Twitter page on Wednesday.

The Texas Longhorns are the top trending team on StubHub

The video starts with a few Longhorns players adderessing the team in a meeting about "unit pride" and being bought into the team's goals. At the end of the presentation, the team broke down with a "hook em," and the screen changed to a message congratulating Hine and Jaquess on their scholarship offers.

Roars of joy from the Longhorns players soon took over the room.

Hugs were shared. Tears were shed.

The two sophomore linebackers embraced for one more hug together to celebrate their accomplishment, and they spoke about what the moment meant to them.

"My dad played football here and he was on scholarship here," Jaquess said as he choked up. "And every single day, I've strived to be exactly like him. This is all I wanted. This means so much to me right now and I thank every single one of y'all for encouraging me."

"Growing up in Austin, my entire life I wanted to come to Texas," Hine said. "The only school I wanted to play football for was Texas."

It's so hot it feels like Austin is melting. Let's experiment!