Check out live score updates and the latest highlights from the Texas vs. Kansas State game here. 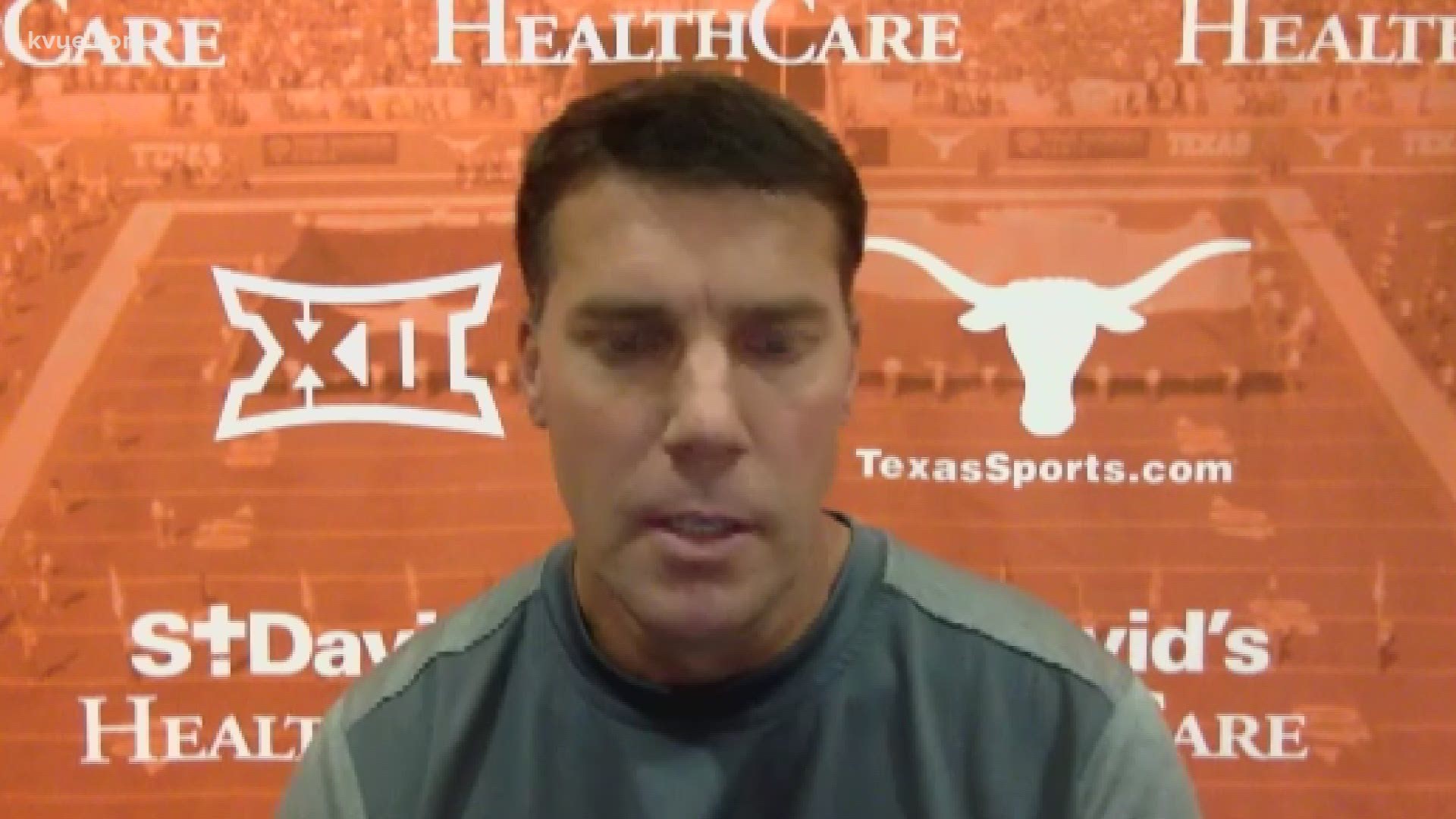 Texas' offense was humming all day long. UT's defense caused turnovers and the offense converted them into touchdowns nearly every time.

“With Bijan, the speed of the game is finally slowing down for him. It hadn’t earlier in the year. Bijan was never going to be an early enrollee anyways, he was a summer guy," Herman said. "I’ve told you guys that before, we phased Ezekial Elliot in his freshman year. You just see different things as a freshman tailback. You’re either too fast or too slow to the hole, or you’re trying to make too many cuts. There’s a thousand things, a thousand bad habits that have to get fixed. He’d be the first to tell you he needed that phasing in process to understand the scheme and the speed of the game.”

“It’s a blessing to have the opportunity that God brought here, and to be able to play with the team like this and to see what was going on today, it was a great feeling today and I’m just going to keep it going,” Robinson said.

Sam Ehlinger passed for two touchdowns and threw for 274 yards, as well.

For Kansas State, Round Rock native Deuce Vaughn led the way, offensively. The freshman running back for the Wildcats rushed for 125 yards and two rushing touchdowns on 10 carries, and added 45 receiving yards on four catches.

“Of course but at the end of the day winning the ballgame is the biggest thing when you step out on the field on Saturdays and we couldn't get it done today," Vaughn said. "So good game but it wasn’t enough to get the win today. So got to get back to work.”

The 100 combined points scored between the two teams made Saturday's game the highest-scoring contest in series history, according to Texas Athletics. The previous record was 87 points scored in 2006.

Texas will play its final regular-season game against Kansas on Dec. 12.

Key moments/plays: Tyler Burns ran the ball out for the Wildcats on two runs. This ended the game.

Key moments/plays: Gabriel Watson started the drive with a two-yard run. Casey Thompson ran out of bounds for a gain of three yards. Texas ran the ball on third down and did not convert. UT punted the ball away.

Key moments/plays: Kansas State ran the ball six plays straight and got stopped at midfield. The Wildcats punted the ball away.

Key moments/plays: Casey Thompson has entered the game at quarterback. Roschon Johnson started the drive with back-to-back runs of 16 and 43 yards to set up first and goal. A short run from Johnson and a run for loss by Thompson set up third and goal from the seven-yard line. Thompson ran a quarterback keeper to the four-yard line. Texas converted the field goal.

Yikes. 🙃@TexasFootball finishes this drive with a FG, lead Wildcats 69-31

Here are the highlights: https://t.co/bgh8VpK2rq

Key moments/plays: Will Howard was tripped up short of the first by Chris Brown on a run to the outside edge. But, an unsportsmanlike penalty gave the Wildcats a new set of downs. Deuce Vaughn broke off a 17-yard run into Longhorns territory. Howard was stopped short of the first down on a third-down scramble. Kansas State turned the ball over on downs after going for it on fourth down.

Key moments/plays: Deuce Vaughn was tackled for a loss. This play ended the third quarter.

After the interception... @TexasFootball gets *DJ khaled voice* .... another one. 🤘🏈

Key moments/plays: Will Howard threw an interception. That interception was the third turnover forced by the Texas defense.

Key plays/moments: Roschon Johnson started with a nine-yard run and then kept the chains moving with back-to-back 10-yard runs after that. After a few short passing plays, Ehlinger converted a 33-yard pass on third down to Jake Smith. On the next play, Ehlinger pitched the ball to Cade Brewer, who took the ball in for a 15-yard touchdown.

The Longhorns offense is HUMMING today 🔥

Key moments/plays: Deuce Vaughn returned the kickoff 40 yards and a penalty tacked on more to put the ball at the Texas 44-yard line. A false start penalty on third down stalled the drive. Kansas State punted the ball away.

Key plays/moments: Bijan Robinson started this drive again with back-to-back carries, ripping off 27 yards on the second carry. Sam Ehlinger checked the ball down to Robinson for 11 yards, then connected with Joshua Moore for 17 yards. Jordan Whittington scored a touchdown on a reverse. Whittington's touchdown was the seventh rushing touchdown for the Longhorns on the day.

Key moments/plays: A few plays into the drive, Deuce Vaughn got 31 yards on a run down the left sideline. On the next play, Will Howard connected with Malik Knowles for a 29-yard touchdown.

Another big kickoff return this year for Jamison!

Roschon Johnson capped off the drive with a one-yard touchdown.

Key moments/plays: Will Howard started the drive with a 15-yard run. Two plays later, Juwan Mitchell got tossed for targeting on another Howard run. Deuce Vaughn got another big run of 18 yards to set up first and goal. Howard capped off the drive with a touchdown pass to Malik Knowles.

Kansas State narrows the deficit with a 7-yard TD pass

Texas' offense has been humming the entire first half. UT scored on every drive of the first half except the last two. UT's defense has created turnovers and the Longhorns are playing complimentary football.

Conversely, Kansas State has stayed around in the game due to an Austin-area product, Round Rock native Deuce Vaughn. The freshman Wildcats running back has accounted for 102 total yards and two touchdowns on nine touches in the first half.

Key moments/plays: Kansas State ran the ball to run the rest of the clock of the half.

Result: End of half.

Key moments/plays: Sam Ehlinger and Roschon Johnson both ran for no gain to set up third and long with just over a minute left in the first half. Ehlinger completed a short pass, but was stopped short of the first down. UT punted for the first time in the game.

Key moments/plays: Will Howard competed a third-down pass to Malik Knowles for 12 yards. Deuce Vaughn ripped off a 13-yard run to midfield. After a few short Howard runs, he hit Knowles again on third down for 15 yards to the Texas 29-yard line. Vaughn gained another 10 yards on a tip-toed catch along the sideline. Vaughn capped off the drive with a four-yard touchdown run.

Round Rock native @C_Vaughn22 making more plays against the Longhorns

Key moments/plays: Bijan Robinson started the drive with a five-yard run, then Sam Ehlinger was sacked for a loss and offensive lineman Derek Kerstetter was injured on the play. Play was stopped for a long time to bring out the cart for Kerstetter.

And this is exactly why opting out isn't selfish.

Texas OL Derek Kerstetter down with a freak injury.

Texas ended the drive with a missed field goal.

Texas OL Derek Kerstetter threw up the Horns as he was being carted off the field.

Let's hope for a quick and full recovery #HookEm pic.twitter.com/f5tUliPKcz

Key moments/plays: A miscommunication on the handoff between Will Howard and Deuce Vaughn led to a fumble recovered by Texas.

Key moments/plays: Sam Ehlinger opened the drive with a 15-yard pass to Jake Smith. Bijan Robinson rumbled past a number of wimpy tacklers on a 27-yard gain. Ehlinger hit Brennan Eagles on a slant pass to bring the offense to the Wildcats' 14-yard line. Roschon Johnson capped off the drive with a seven-yard touchdown run. UT leads 31-10.

Another rushing TD for @TexasFootball! UT up on @KStateFB 31-10 in the 2Q

Key moments/plays: Deuce Vaughn has back-to-back explosive plays. Vaughn ripped off two plays in a row of more than 20 yards, once in the air and then again on the ground. Vaughn's explosive plays have moved the ball into Longhorn territory. On third and three from the Texas 20-yard line, Will Howard was sacked by Joseph Ossai. Kansas State left their offense on the field to go for it on fourth and 13, but then called a timeout. Kansas State came out of the timeout and lined up for a field goal. The Wildcats converted the field goal to bring the score to 24-10.

Key moments/plays: Bijan Robinson opened the second quarter with a 30-yard touchdown run up the middle on a zone play.

Freshman RB Bijan Robinson has his 2nd TD of the day!

Key moments/plays: Bijan Robinson opened the drive with a 15-yard run up the middle. After an 11-yard pass to Brennan Eagles, the first quarter came to a close.

Key moments/plays: A few runs by Will Howard moved the Wildcats offense across midfield. A deep pass from Howard to Chabastin Taylor was almost caught, but broken up by Chris Brown. Howard completed a third-down pass to Malik Knowles for 25 yards. Round Rock native Deuce Vaughn juked a few Longhorns defenders on his way to a 19-yard touchdown.

Key moments/plays: Roschon Johnson punched it in on the first play from three yards out.

.@TexasFootball off to a fast start! 💨

Key moments/plays: Will Howard was intercepted by the Texas defense.

Key moments/plays: Roschon Johnson rumbled through tacklers up the middle on a 22-yard run to cross midfield. Johnson ripped off another 12-yard run. Sam Ehlinger completed a slant on a run-pass option for 15 yards to the Kansas State 13-yard line. UT stalled outside the 10-yard line and the Longhorns kicked a field goal to extend the lead to 10-0.

Key moments/plays: Will Howard opened the second drive with a 25-yard run on a quarterback run up the middle to midfield. Kansas State's offense stalled at the 35-yard line. The 53-yard field goal was no good – the kicker hit the left upright.

Doh! 😅 No refs were injured in the making of this hilarious highlight

After forcing a 3-and-out, @TexasFootball score on their opening drive. 7-0 Horns

The Texas Longhorns return to the road for the last two weeks of the 2020 season and will travel to Kansas both times. First up, the Longhorns will go to Manhattan to take on the Kansas State Wildcats.

UT is coming off of a 23-20 loss to Iowa State that effectively eliminated the Longhorns from Big 12 title contention.

Everything you need to know

Leading into this next game week, senior left tackle Samuel Cosmi has already announced he will sit out the rest of the season to prepare for the NFL Draft, where he is a projected first-round pick. Later on Monday evening after Herman's press conference, junior safety Caden Sterns also announced he would forgo the rest of the 2020 season – and also his senior season – and declared for the 2021 NFL Draft. Keaontay Ingram also announced he would opt out of the 2020 season and plans to transfer.

Another hot topic of the week is Tom Herman's job status. Herman was asked about it once again in Monday's press conference, and his answer remains consistent: he's focused on beating Kansas State and not what people are saying on Twitter message boards.

"I am absolutely and completely focused on getting our team ready to beat Kansas State and not worried about anything other than that," Herman said. "Every conversation Chris [Del Conte] and I have are great. We've got a great relationship. And, you know, we have great conversations."

Herman's coordinators have also come to his defense, as well.

Texas Longhorns' offensive coordinator Mike Yurcich had some choice words to say about the opinions of internet trolls. He says if negative response online distracts a coach, they're "in the wrong gig."

Texas is scheduled to kickoff against Kansas State on Saturday, Dec. 5, at 11 a.m.