'How do we explain that to our players?' Dawn Staley weighs in on disparities between men's, women's NCAA tourneys

"The real issue is not the weights or the 'swag' bags; it's that they did not think or do not think the women's players 'deserve' the same amenities of the men." 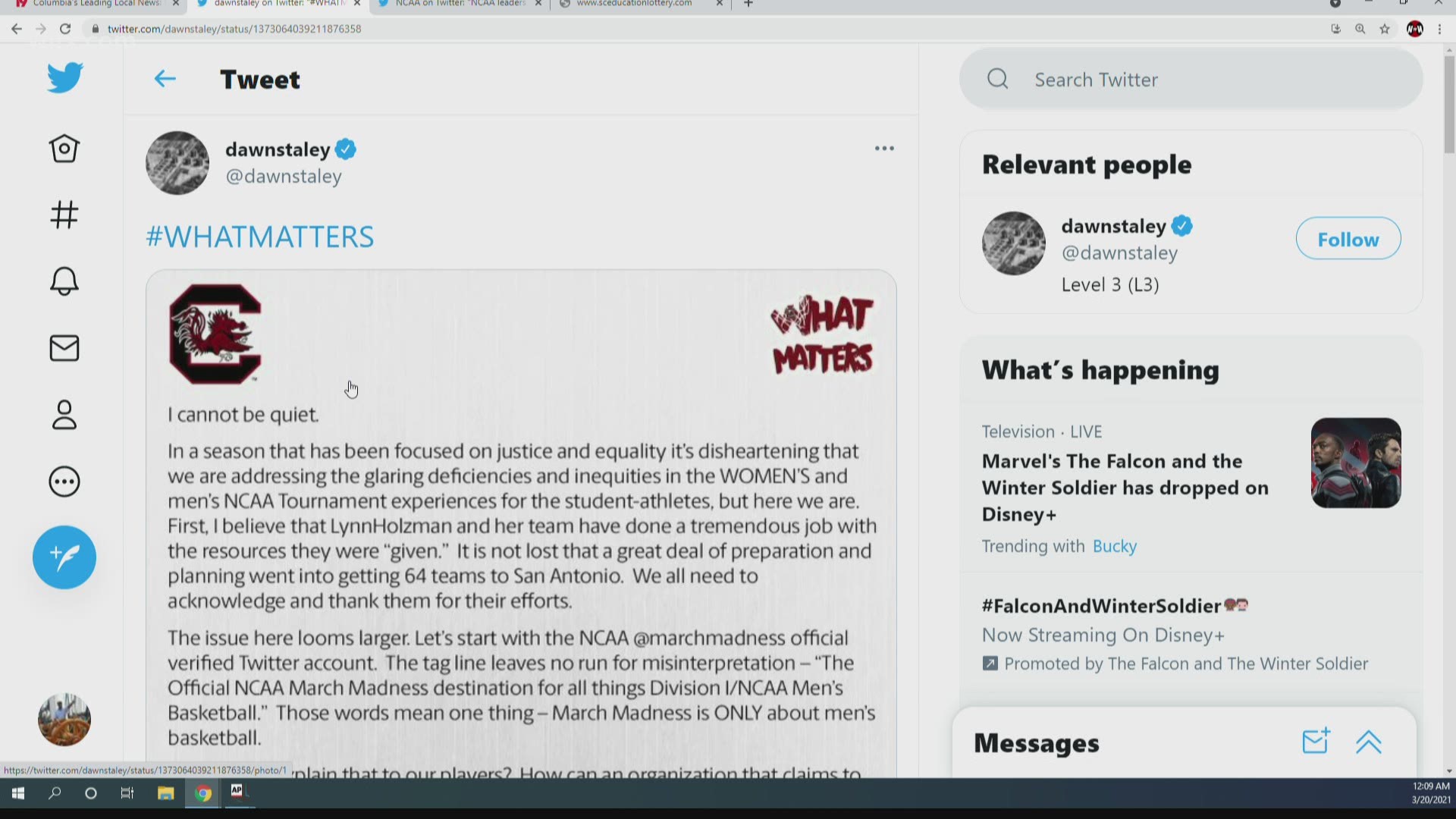 COLUMBIA, S.C. — As Dawn Staley prepares South Carolina's Women's Basketball team for March Madness, she took time out to voice her frustration at the disparity between the men's and women's NCAA basketball tournaments.

Several social media posts from women's players and coaches showing the contrast in conditions for the men's and women's tournaments have sparked anger and frustration.

"I cannot be quiet," USC Women's Basketball coach Dawn Staley said in a letter posted to social media. "In a season that has been focused on justice an equality, it's disheartening that we are addressing the glaring deficiencies and inequities in the WOMEN'S and men's NCAA Tournament experiences for student athletes, but here we are."

"There is no answer that the NCAA executive leadership led by Mark Emmert can give to explain the disparities," Staley wrote. "The real issue is not the weights or the 'swag' bags; it's that they did not think or do not think that the women's players 'deserve' the same amenities of the men."

In a stinging rebuke, Staley wrote, "What we now know is the NCAA's season long messaging about 'togetherness' and 'equality' was about convenience and a soundbite for the moment created after the murder of George Floyd."

In response to some of the discrepancies, including the weight facilities, the NCAA's Lynn Holzman issued a statement saying the different amenities were "due to the limited space" and added that "the original plan was to expand the workout area once additional space was available later in the tournament."

The statement also said the NCAA was "actively working to enhance existing resources at practice courts."

"We fell short his year, and what we've been doing to prepare in the last 60 days for the 64 teams to be here in San Antonio and we acknowledge that," Holzman said in a ZOOM call addressing the concerns.

Dan Gavitt, NCAA Senior Vice President of Basketball was also on the call, and apologized for the shortcomings of the women's facilities.

Sports and tennis icon Billie Jean King was one of many who responded to the discrepancies saying the NCAA "can do better than this."

"We're always supposed to be so happy with just anything, the crumbs, whatever," King said in the video shared on Twitter. "We're not happy anymore. We want equity, we want equality, we want the same. We should have the same workout facility or at least let us use the same facility."