In a press conference, Coach Tom Herman fielded questions about "The Eyes of Texas" for the second week in a row, but also previewed the upcoming game versus Baylor. 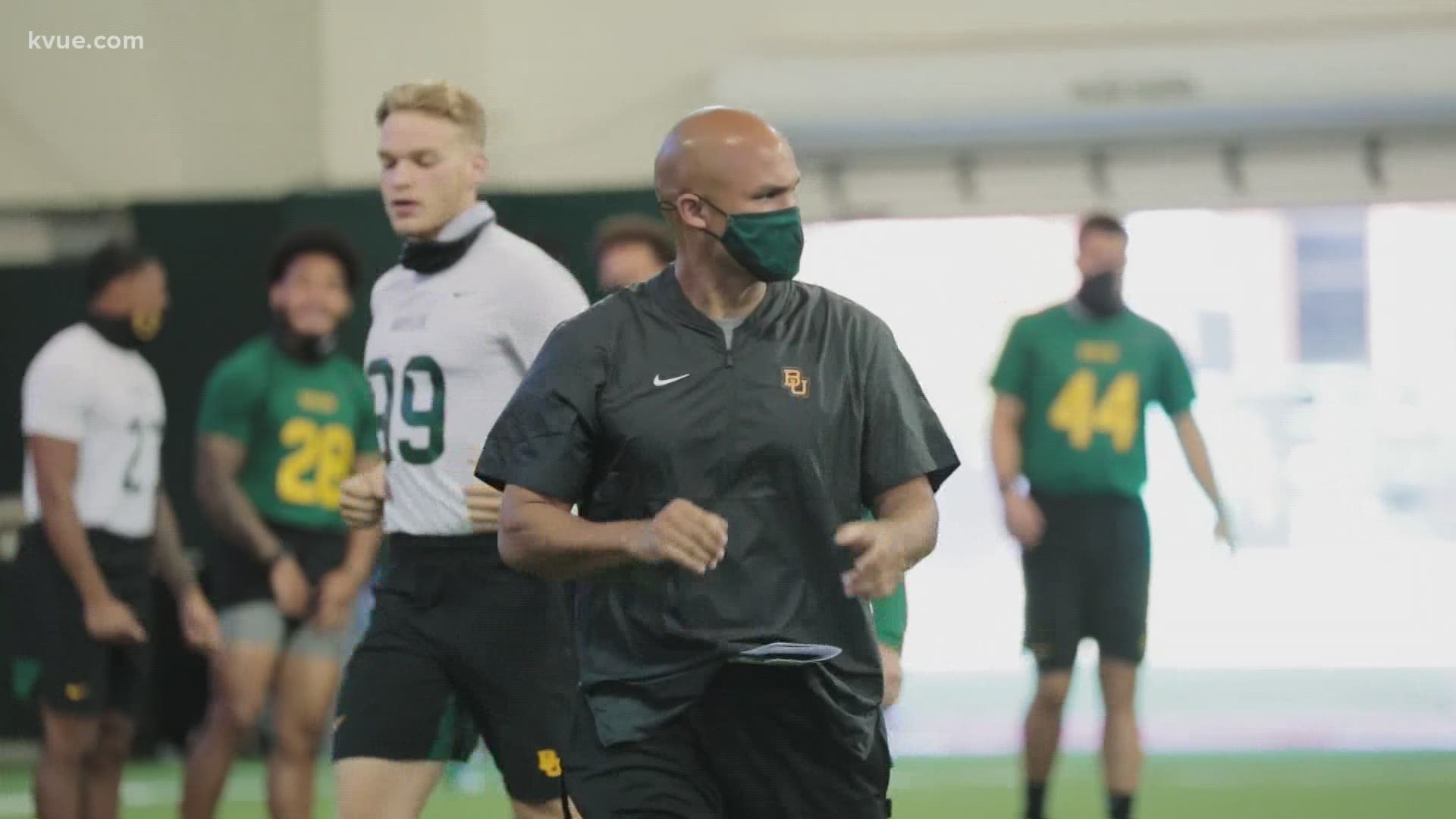 AUSTIN, Texas — The bye week for the Texas Longhorns could not have come at a more opportune time.

UT is set to host the Baylor Bears on Saturday, Oct. 24, after licking the wounds of back-to-back losses to TCU and Oklahoma and getting some time for players to rest.

On Monday, Head Coach Tom Herman fielded questions yet again on the ongoing controversial saga surrounding "The Eyes of Texas," but also spoke on his relationship with Baylor Head Coach Dave Aranda, the injury report for the Longhorns and more.

Here's a look at what Herman talked about in his weekly press conference:

"Yeah, good afternoon. Really well-timed bye week to have three straight games come down to the final possession, the very last one being a four-overtime, five-hour game in 90-degree heat. And, you know, that was a pretty grueling three-game stretch for our guys. So, the bye week certainly came at a very, very opportune time. And we made the most of it, in my opinion. We were not on the field very long ... [an] hour and 15 minutes but got a lot of good-on-good reps. Did not start introducing [the] Baylor scout team until Friday. So, Tuesday and Thursday was just playing football, which we need. And we need it versus – and this is certainly no offense to the guys who bust their butts for us on our scout teams – but we need it versus the speed that our one and two defense and our one and two offense can provide the other side of the ball. So, it's been a really, really good week. Gave the guys Wednesday off, gave them Saturday off. And then obviously today, Monday is their normal day off. So they've had three out of the last five days have been off to recover, recuperate, heal. And, you know, all signs are that has been very productive ...

So, as far as Baylor is concerned, you know, my heart goes out for Dave [Aranda]. Everybody here knows Dave and my relationship goes back – Coach Aranda that is – goes back all the way to where we were 18, 19 years old. And we have stayed friends and confidants over the years and you just can't imagine what he's been going through. I do know that they have started practice yesterday. Obviously, anytime you've got a quarterback as seasoned and as high-performing as Charlie Brewer, you're going to have a chance to score points. And then defensively, man, I can't say enough about Terrel Bernard. There's a young man that I fell in love with in recruiting when we were at the University of Houston and had him committed there. And he has gone on and had an unbelievable career at Baylor and continues to do so. I'm assuming he's a senior by now ... it seems like he's been playing there forever. But, you know, he is a guy that is all over the field. And they do a really good job lining him up in different places in order to exploit and utilize his talents.

And then before we move on, I just want to address again, I know there's some lingering questions about our postgame. I want to make it very clear that our coaches, not just in football, but in every sport in our administration, are completely aligned. We've been communicating all summer in terms of the expectations of what postgame should look like. And we have had very meaningful conversations with our team, encouraging them to participate, but also being very, very sensitive to the plight, to the feelings, to the very individual circumstances that all of these young men are going through. We had our latest team meeting last week, which Chris Del Conte did attend. I thought he did a great job not only talking to our guys about the expectations and the importance of thanking our fans who our players truly, truly do love and love playing for. And it is a huge reason why they came to the University of Texas. And, you know, we had a great team meeting ... the result of that meeting: I think the general pulse of the team is that we're in as good a place as we've ever been right now as a team. And so, you know, I couldn't be prouder of our team for staying unified throughout all of this, throughout the last few months. And when I say unified, that doesn't mean everybody agrees. What that means is that there has been a ton of open, honest, mature conversation in regards to a lot of topics. We're a very divided country ... very, very divided country. And our locker room is exactly the opposite. Our locker room respects and, in fact, admires guys that do speak their mind. Everybody is listened to and there are no grudges held for anybody who feels a certain way about anything. And I respect the hell out of our team and our team leaders for fostering that environment of, of inclusively as well as an understanding and true compassion for somebody else on that team and their differing views should they have them.

And again, just really excited to see our team come out. It's been a long couple of weeks, but we have continued to make some dramatic improvements over the bye week. Assuming, with fingers crossed, that Baylor is able to field a team this Saturday. All indications that have been given to me by Baylor and our administration is that, you know, barring anything unforeseen between now and Saturday, that the game will be played. And I know our guys are extremely excited to get back out on the field and play some football."

"As you know, Dave is not heavily involved in the day-to-day game planning on both sides of the ball. As you guys well know, Larry Fedora is their offensive coordinator. And Larry was here with us and with me for a year and was awesome ... provided a ton of value to our program. But the way I understand it, and I think Dave's doing it the right way, especially as a first-year head coach, there's going to be 1,001 things that are going to pull you away from the X's and O's. And so, I know that he's got a ton of faith in Coach Roberts on defense. Coach Roberts was a mentor of his growing up in the profession, and he's got a ton of faith in Larry, which any head coach should and would. Larry is that good of a football coach. So, I don't have a whole lot of tendencies on Dave, except I know at 5:30 in the morning to not call him because he's probably getting his yoga session in from about 5:30 a.m. to 6 a.m. But other than that, we haven't talked a whole lot of football per se in the last few years. It's been a lot of strategy, a lot of leadership, a lot of team building. You know, Dave's leaned ... I don't want to say lean ... Dave called at times with questions, you know. Haven't done this for now, six, seven years. And Dave being in his first year.

But in my opinion, he's doing a great job. I couldn't imagine being a first-year head coach, having to go through a year like this. Although with seven new assistants and installing new schemes in all three phases, sometimes I do feel like a new head coach. But, you know, he's doing a good job of trusting his coordinators and, and leading this team from what I understand.

What have been the biggest reasons for the defense giving up 36 points per game?

"I think overall, it's been minor assignment issues, and I'm not saying like, coverage bust. I'm not saying I was supposed to be on the left side of the field. I was on the right side of the field. I'm talking about the small details that just take a thousand reps. You know, 'I've got a guard pulling and do I fit him on this shoulder or do I fit him on this shoulder? Where is my help coming from? Where do I need to spill the ball carrier to? What gap do I need to be in?' You know, 'What is my depth at strong safety so that I can fill the run if it's run but still defend the pass?' And so, I just think there's so many small, detailed things that come with a thousand reps in terms of how you fit a play, how you fit a play. I think a lot of people just see 11 guys and they just run to the ball. And that's not the case in defensive football. You've got to be gap sound, you've got to be assignment in your gap. And then whoever is trying to block you in that gap, you've got to take on with the proper leverage so that you can force the ball back to the unblocked player. And we haven't done that. We're getting better. We did that more this past week than we did the week before that and than we did the week before that. But we need to do it a lot more consistent, consistently.

And then from an overall theme, I think, again, they're all different. You know, red-zone defense was a problem against Oklahoma, especially in overtime. It was a strength against TCU. You know, tackling was a problem against Texas Tech ... it was a strength against Oklahoma. So, I think, you know, to paint it with such a broad brush or broad stroke, there's not really fair. I think you've got to dove into the minutia. And, and I keep going back to the attention to detail on the very, very small things in terms of being gap sound, being leverage sound, be in-depth sound. All of those things and then recognizing the different runs and passes and having those, again, banked reps in your brain that you've seen crawl-flat to cover four the way we coach cover for a thousand times. Well, the only way to do that with no spring ball and no summer and a truncated training camp is not a ton of walk-throughs and a ton of Zoom meetings and in-person meetings now. But there is no substitute to the live physical rep. And, and that's what we try to get as many in this week as we could to, to maintain – not maintain, but even jumpstart maybe the trajectory that, that our improving defense is on."

Herman on areas of the game where he saw improvement

Kickoff for Saturday's game between Texas and Baylor is scheduled for 2:30 p.m. at Darrell K. Royal-Texas Memorial Stadium.

John Henderson, the oldest living Longhorn letterman, has died at 107