A West Campus bar also hosted a "Stand With Sam" event before the game. 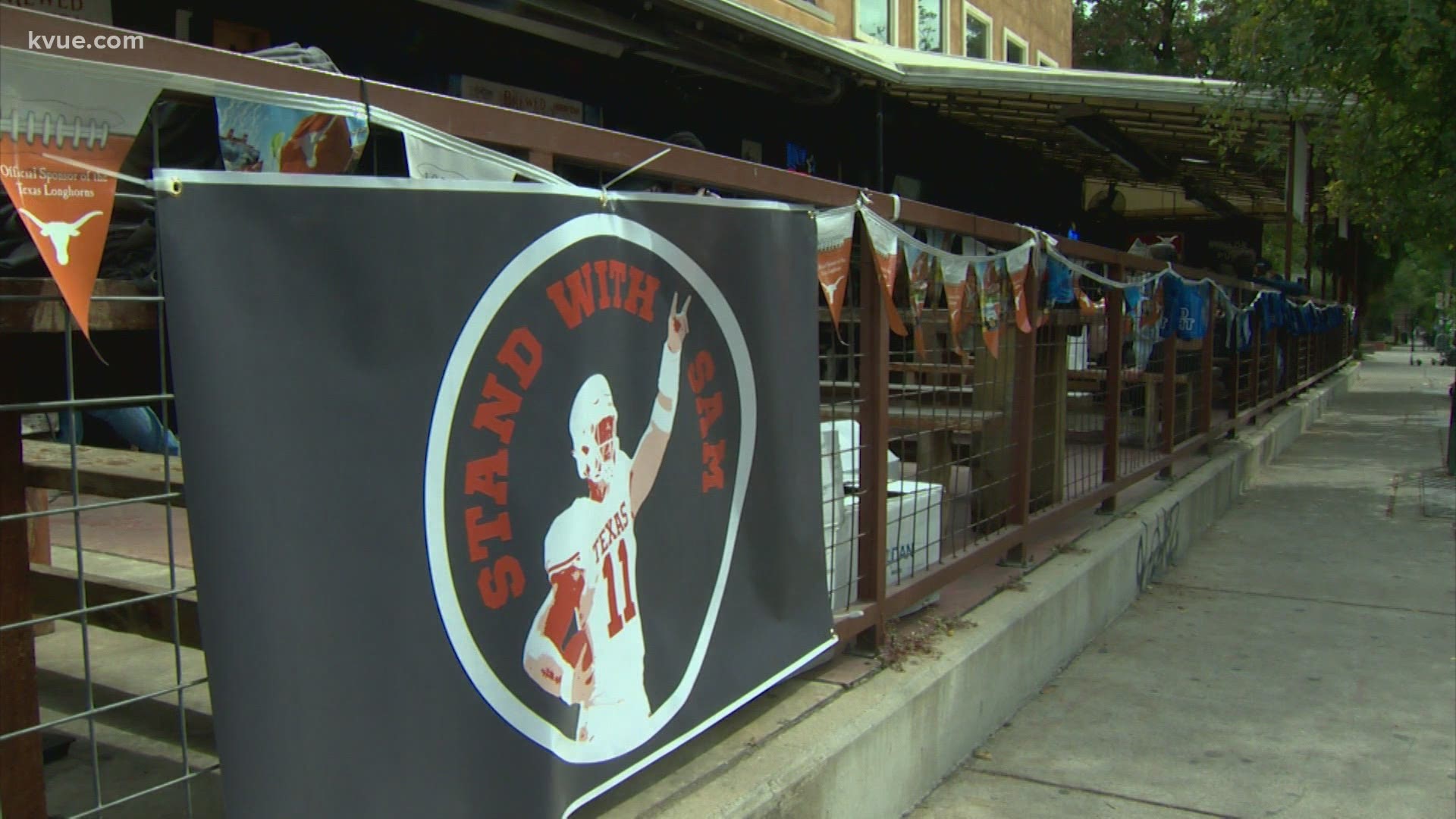 AUSTIN, Texas — Texas Longhorns fans catching the game against Baylor in person may notice something unusual flying above them.

A banner reading "StandWithSam.org" was spotted flying around Darrel K. Royal – Texas Memorial Stadium ahead of the Longhorns' game against the Baylor Bears on Saturday. The URL redirects to a Change.org petition created by "fans and alumni of the University of Texas at Austin who are disappointed with 'The Eyes of Texas' being used to divide us."

The petition states that the group applauds Texas quarterback Sam Ehlinger for "standing strong" for the "Eyes of Texas," asks that the University of Texas administration keep the song as the alma mater and encourages players to remain on the field for the song following games.

Sam Ehlinger said he sings The Eyes of Texas to feel connected to his dad.

Other players have said they won’t sing The Eyes of Texas because of its racist past.

The locker room was never divided, but Texas fans are acting like it and are now choosing sides. https://t.co/REJPdnULSf

West Campus bar Cain and Abel's also held a "Stand With Sam" event before the game. The bar planned to give out free T-shirts to "show our support for one of UT's greatest traditions."

These demonstrations of solidarity come after Ehlinger was one of few UT players who stayed on the field to sing "The Eyes of Texas" after the Longhorns' dramatic quadruple overtime loss to Oklahoma in the Red River Showdown. The image led many fans to wonder if the team is divided.

Earlier this week, Ehlinger called the situation "a little bit of a misunderstanding," saying that he stayed on the field longer than normal talking to Oklahoma coaches and players and that he wasn't the only one on the field. Ehlinger also stated that singing the song is important to him because he feels a connection with his family and his late father.

Head coach Tom Herman also said this week that the team is unified and has worked through its handling of the postgame tradition. UT Athletic Director Chris Del Conte has said his expectation is that athletes stay on the field postgame to show appreciation to the fans.

This week, the chairman of the University of Texas System Board of Regents also issued a statement, reiterating the board's support for keeping "The Eyes of Texas" as the official school song.

WATCH: Should UT force players to stay on the field for 'The Eyes of Texas'?

COVID-19 infections and hospitalizations continue to rise in Texas