No. 14 Texas Longhorns fell to No. 5 Oklahoma Sooners 39-27 in the Big 12 Championship game after allowing 12 unanswered points in the fourth quarter. 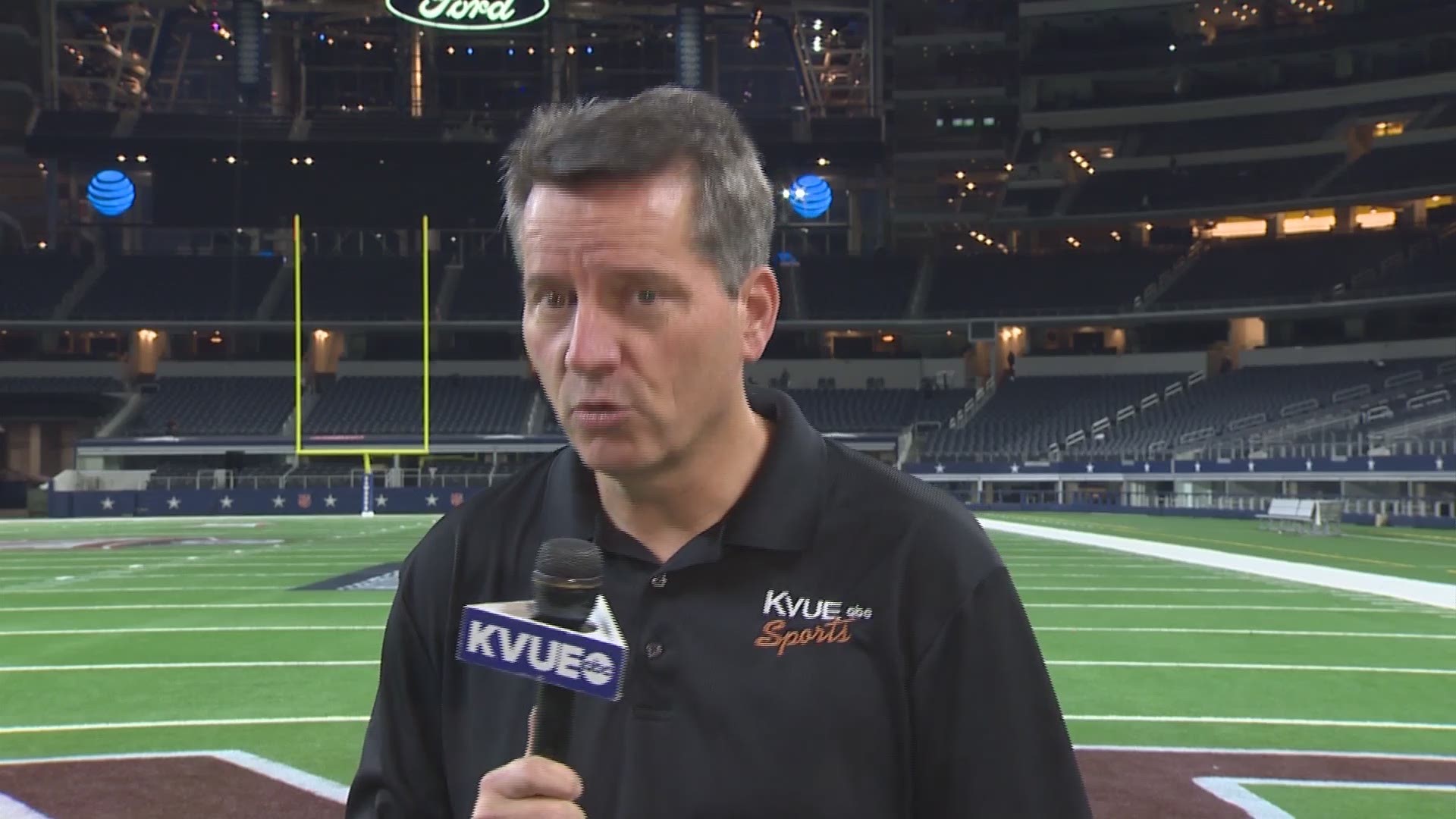 ARLINGTON, Texas — In another hard-fought football game between the Longhorns and Sooners, the outcome of the Big 12 Championship did not turn out like the Red River Showdown.

Despite entering the fourth quarter tied 27-27, Oklahoma dominated the final 15 minutes of the game and scored 12 unanswered points to gain the edge in this "Red River Rematch."

Oklahoma withstood a second-half comeback by Texas to secure another Big 12 Championship. pic.twitter.com/YXSQBMeYxo

To start the game, Texas sophomore quarterback Sam Ehlinger looked plenty healthy despite being banged up in recent weeks. Though he may have been a little too amped up to start the game after missing two open targets, the offense clicked in key moments. Ehlinger capped off Texas’ opening possession with a 16-yard rush into the end zone to give the Longhorns a 7-0 lead.

On the ensuing possession, Oklahoma marched right into the Texas red zone. However, what would have been an interception by Texas freshman safety Caden Sterns was negated by a facemask penalty by Kris Boyd. With Oklahoma at the one-yard line on third down, Anthony Wheeler and Gary Johnson came up with a huge stop to limit Oklahoma to a field goal. Texas held the lead 7-3 with 7:37 remaining in the first quarter.

RELATED | HIGHLIGHTS: No. 14 Texas Longhorns fall to No. 5 Oklahoma Sooners 39-27 in Big 12 Championship

By the time the first quarter ended, Texas kept Oklahoma out of the end zone. Neither team had eclipsed 100 yards of offense.

To start the second quarter, Kris Boyd recovered from his first quarter efforts when he knocked the ball out of Oklahoma wide receiver Marquise Brown’s hands in the end zone. Boyd's pass break up forced the Sooners to settle for another field goal.

1 / 18
Ronald Martinez
ARLINGTON, TEXAS - DECEMBER 01: Players of the Oklahoma Sooners hold up the Big 12 Championship trophy after the Sooners defeated the Longhorns 39-27 at AT&T Stadium on December 01, 2018 in Arlington, Texas. (Photo by Ronald Martinez/Getty Images)

So, with a 7-6 lead, Texas’ offense picked up where it left off with a nine-play, 75-yard drive where Ehlinger punished the Sooner defense once again. Ehlinger's three-yard rushing touchdown stretched the Texas lead to 14-6.

But the Sooners would finally get out of their own way on the next possession. Oklahoma's Heisman cadidate quarterback Kyler Murray connected with wide receiver CeeDee Lamb twice on the drive, once for 46 yards and later for a 28-yard touchdown. Suddenly, the Sooners were back in business, trailing only 14-13 with 5:01 left in the first half.

Business remained good for OU with 59 seconds left in the half, and the Sooners added one more score. On first and goal, Murray and wide receiver Grant Calcaterra hooked up for a six-yard touchdown.

At the break, Texas had 233 total yards to Oklahoma’s 256. The Longhorns were flagged eight times for 78 yards in the first half. Oklahoma drew yellow just two times. To pile onto the momentum swing, Oklahoma also got the ball to start the second half.

Deferring to the second half at the coin flip turned out to be a good call for the Sooners as they came out swinging. Texas has success stopping the run in the first half, but the defense strayed a bit to start the second half. An eight-play, 75-yard drive resulted in a six-yard rushing touchdown by Sooners running back Trey Sermon. Oklahoma led 27-14.

The next drive would be a critical for the Longhorns and they responded to the call. Senior wide receiver Collin Johnson hauled in his seventh catch for a touchdown, giving him 169 yards for the game. Johnson finished with 177 yards, a single-game Big 12 Championship record, beating Malcolm Kelly's 2006 mark of 142 yards.

That’s not all -- the pendulum continued to rotate. On Texas' next drive, Ehlinger and wide receiver Lil’Jordan Humphrey connect for a short touchdown, but the extra point was blocked, keeping the game tied at 27 apiece late in the third.

After an Oklahoma field goal, the Sooners nearly scored again. CeeDee Lamb sealed a catch for 56 yards, but coughed it up at the Texas eight-yard line and the Longhorns recovered the first turnover of the game.

However, in wild fourth quarter fashion, Ehlinger was sacked by Oklahoma cornerback Tre Brown in the end zone just two plays later, resulting in a safety. Ehlinger was asked after the game if he saw the corner blitz coming.

With the ball back, OU milked the clock and then drew the dagger with two minutes to play. Calcaterra came up with an incredible one-handed catch in tight coverage in the end zone.

After the extra point, the Sooners got one step closer to their fourth straight Big 12 Championship. With under a minute to play, the Sooner defense sealed the game with an interception -- Ehlinger’s first turnover of the game.

The loss struck hard for Texas head coach Tom Herman and the players.

"Extremely disappointed in the outcome, especially for these seniors," Herman said.

The Longhorns will find out which bowl game they’ll be selected for on Sunday. Chances are high that they make an appearance in the Sugar Bowl even after losing to Oklahoma. But, that’s dependent on whether the Sooners make it into the College Football Playoff. Texas could also get a bid for the Alamo Bowl.