Former Longhorns reactions to the Big 12's reported decision to penalize the University of Oklahoma football team for showing the "Horns Down" gestured varied from amused to disappointed. 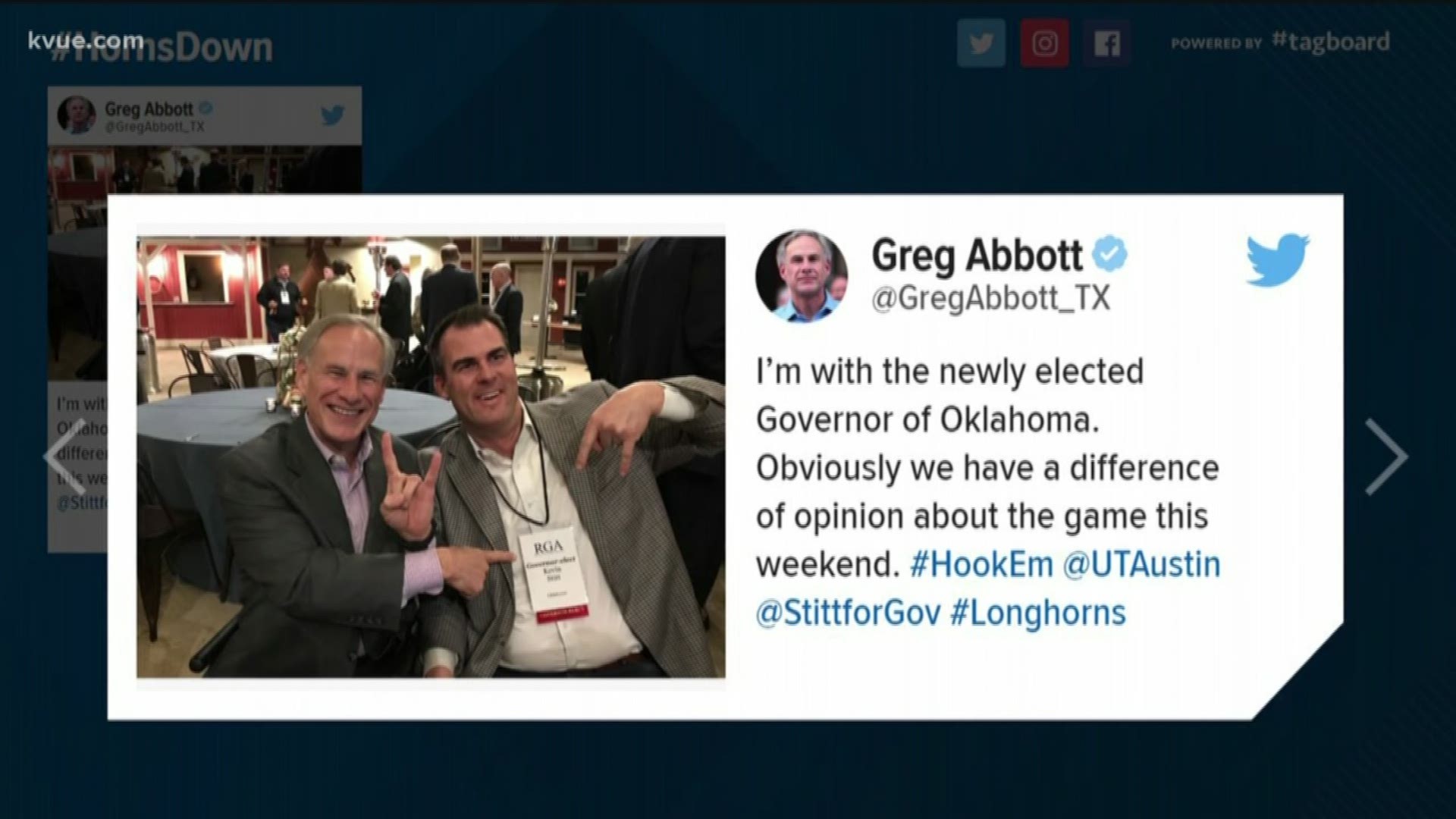 AUSTIN — The University of Oklahoma Sooners will reportedly be penalized if they use the "Horns Down" gesture during the Big 12 Championship game against the University of Texas Longhorns.

OU Coach Lincoln Riley said he received confirmation Tuesday from Big 12 officials on where they stand about the apparent diss to the Longhorns, according to reports from Oklahoma media outlets.

Following the news of the Big 12's hammer on the "Horns Down" gesture, former Longhorn football players have been voicing their opinions on the situation. Many said the "Horns Down" symbol helps fuel the rivalry, and they don't care if people participate in that.

'Horns down' gesture could land OU a penalty in Big 12 Championship against UT, reports say

"This is a game where you knock out the punter and throw out the record books and the rankings. It's personal, and it's what makes this game so great. I don't care about that (Horns Down). It adds to the rivalry. If we (Texas) don't like it, take it out on the field. Hook Em!" said Norman Watkins, a former UT linebacker from the 90s.

Mike Adams, a three-time all conference Longhorn receiver who played in the first Big 12 Championship game against Nebraska, said, "They should be allowed to do it (Horns Down). On the same token, our guys (Texas) shouldn't be so sensitive about the Horns Down. I love some trash talk. You still have to line up and play the next play." Adams went on to add, "Honestly, if players from opposing teams started throwing up the horns, that would be more disrespectful -- salt in the wound."

Peter Gardere, who was the quarterback for the Longhorns from 1989 through 1992 when they beat Oklahoma all four years, said, "The Longhorns are not snowflakes. The Big 12 could have made better use of their time pushing for a later kickoff on Saturday."

Jason Reeves, a former University of Texas linebacker from the 1990s said he's humored by the reported news.

"This is funny if true. OU is looking at a minimum of 150 yards in penalties. A fitting punishment for the disrespect. Time for OU to get their own hand sign," Reeves said.

Todd Dodge, the Westlake High School head football coach and former Texas football player, said the Longhorns should be more concerned about the elderly people in the stands throwing out disrespect.

"The Horns Down was the least of our worries when I played. The ones you really had to worry about was [sic] the little old ladies from OK, flipping you the bird as you entered the Fair Grounds," Dodge said.

The Big 12 Championship game is officially sold out

How the Big 12 Championship between Texas, Oklahoma differs from the first meeting

Doug English, who was an All-American defensive lineman for the Longhorns from 1972-1974, said he doesn't understand why the Sooners would want to focus on negative energy anyway.

"As an athlete, you have a wonderful opportunity to deliver a positive message to a large number of people. Why would you waste that on something classless & negative?" English said. "If your goal is focused on your play and doing your part for the team with everything you have, you don't have the time or interest for taunting."