Here's the history and origins behind UT's 'Eyes of Texas' lyrics

UT's "Eyes of Texas" report, released on March 9, stated there was "no racist intent" behind the song. 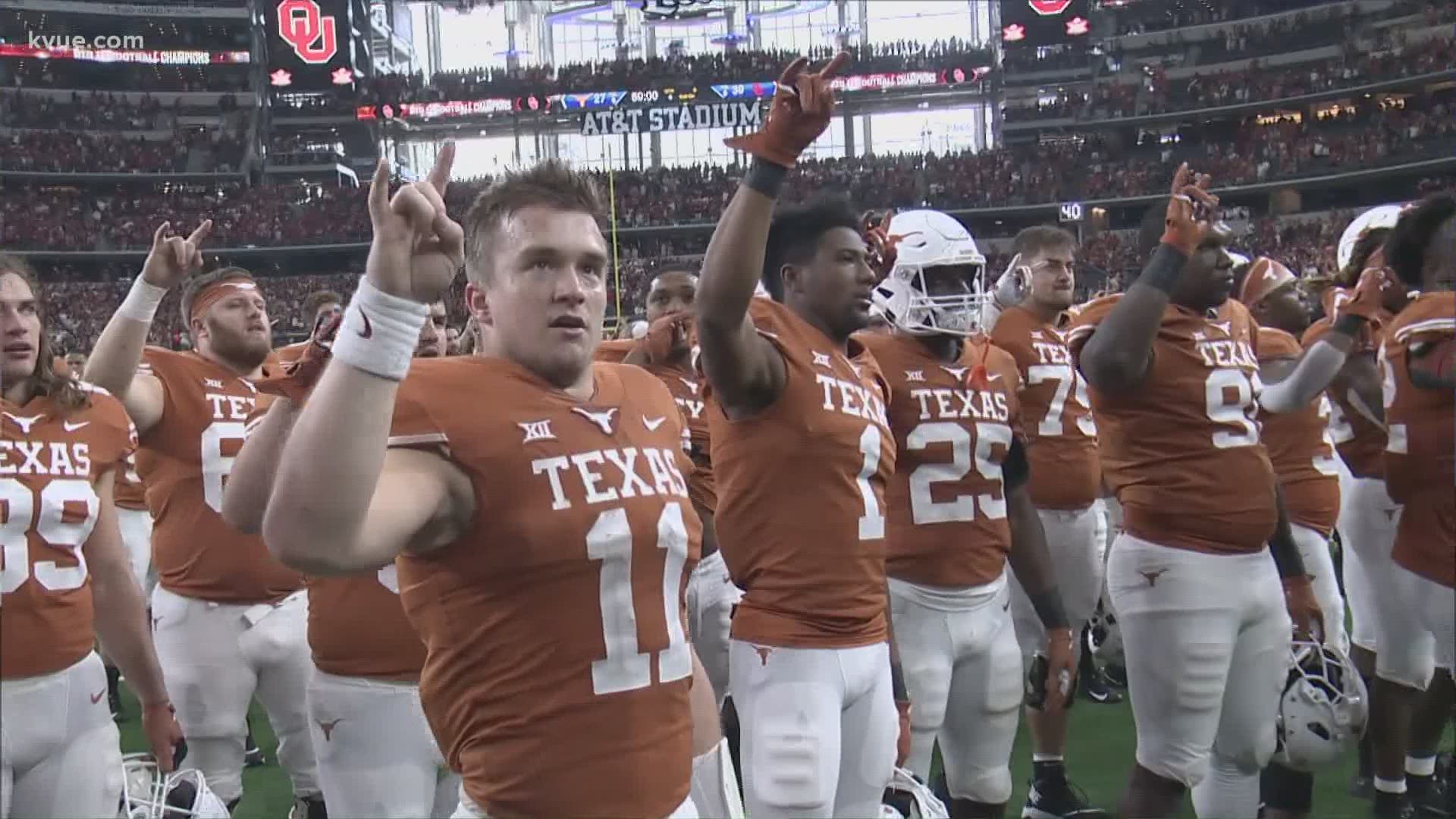 AUSTIN, Texas — On Tuesday, March 9, the University of Texas released its 58-page report on the findings of "The Eyes of Texas History Committee," which concluded that there was “no racist intent” associated with the song.

In the committee's executive summary, it determined, “These historical facts add complexity and richness to the story of a song that debuted in a racist setting, exceedingly common for the time, but, as the preponderance of research showed, had no racist intent."

The song, which was written in 1903, is typically played before and after every UT sporting event.

Here are the lyrics:

The Eyes of Texas are upon you,

All the livelong day.

The Eyes of Texas are upon you,

You cannot get away.

Do not think you can escape them

At night or early in the morn --

The Eyes of Texas are upon you

'Til Gabriel blows his horn.

History behind 'The Eyes of Texas'

The 58-page report concluded that while performances at campus minstrel shows with actors in blackface, which continued into the 1960s, are a “painful reality,” the song does not appear to have been composed as a minstrel tune.

In June 2020, UT Professor Dr. Edmond Gordan explained in a tweet from the UT Liberal Arts Twitter account the nodes of racism won't be found in the "The Eyes of Texas" lyrics itself but in the song’s past. You can take the full tour here.

This is a tour stop on Dr. Gordon’s Racial Geography Tour at the Texas Cowboy Pavilion. He discusses the origins of “The Eyes of Texas” and the Texas Cowboys history of minstrel shows. Take the full tour at https://t.co/XyzOtZqMnU pic.twitter.com/PW8hkrWdQG

In the virtual tour tweeted in June, Gordon said "The Eyes of Texas" was originally a satirical song once performed at minstrel shows, which are comedic variety shows featuring White performers in blackface. The Texas Cowboys school spirit association was a key social group on the UT campus for decades, Gordon said. In the past, Gordon said members would put on blackface and perform a sort of a minstrel show each year for their schoolmates.

Gordon also said in the virtual tour that "The Eyes of Texas" is a satirical rendition of Confederate commander Robert E. Lee’s saying “the eyes of the South are upon you,” which was made popular on the UT campus by former university president William Lambdin Prather.

The report, released on March 9 by the committee, contradicts this perspective. Researchers said in the report they could find no direct link between the signature line “the eyes of Texas are upon you” and anything Lee would say to his students at Washington and Lee University, where he was president after the Civil War. The panel determined there is a “very low likelihood” the line originated with Lee.

“Students, as students will do, decided to make fun of that and created a satirical song that have words that were appropriate to the University of Texas,” Gordon said in a HookEm.com interview. “Those are the words of the song, and they put it to the tune of a well-known song, which was ‘I’ve Been Working on the Railroad.’”

This brings up another finding of the report: the ties to “I’ve Been Working on the Railroad,” a song Princeton students created the song in 1894 to insult Black railroad and levee workers. The committee acknowledged the song borrows the melody of “I’ve Been Working on the Railroad,” but said it was most likely because it was already well known and easy to sing.

Gordon was not one of the 24 members of the Eyes of Texas History Committee:

To view Gordon's full virtual tour about "The Eyes of Texas," click here.

Texas will soon reveal the next groups of people eligible for the vaccine in Phase 1C. Who will be included?