Thad Young said second-year standout Devin Vassell led the meeting, and players put everything on the table as the team works toward improving. 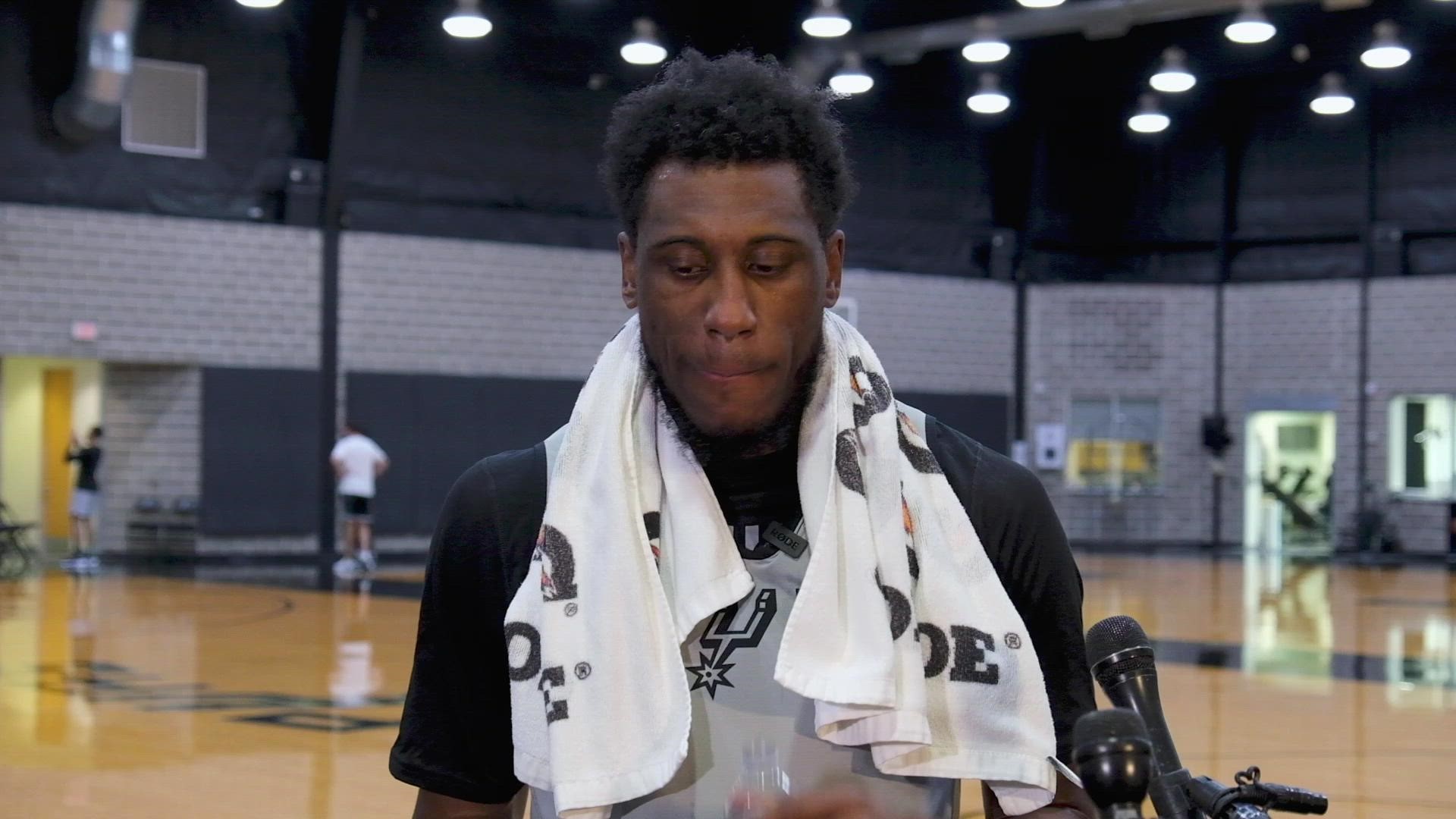 SAN ANTONIO — The Spurs are 4-11 after losing five of their last six games, and after the last loss to the Timberwolves, one of the youngest guys on the team led a players-only meeting to hash out the on-court issues.

"The Minnesota game, we didn't put out the effort that we we should have put out. Coach told us that coming into the locker room, that we got our butts kicked," said veteran Thad Young. "Obviously, you take an L, it's always a bad thing, but the one thing that came out from it was we took that butt whooping, and we went back into the locker room, we sat down, we talked for 20, 30 minutes, the whole team, everybody wants to voice their issues, their points. Everybody put it on the table, everybody talked."

Young said that the leader of the meeting was second-year standout Devin Vassell.  Vassell has been one of the most vocal in postgame interviews about how mistakes have contributed to the lackluster results.

"Coach walked out, and we all kind of- well, actually Dev stepped up and took the floor, which is great for a young guy," Young said. "He said, 'Come on, let's try to figure this thing out. Let's talk about it. Let's put everything out on the table.' That's what you want from the young guys. I could do it, but at the end of the day, you want these younger guys to start stepping up. I think he did a really good job of kind of orchestrating and then getting guys to start speaking and really voicing their issues and voicing their points. That's the first stage of growth and signs of, everybody wants to win."

There were some moral victories earlier in the season, but nobody in the locker room is keen on celebrating those anymore. Dejounte Murray puts up a triple double in a losing effort and says the stats don't matter. Coach Pop either says he was proud of the effort or that he wasn't, and that the worm will turn. Players lament the missed shots and errors, but note that they're still figuring it out. That sequence has already begun to sound like a broken record.

As losses pile up, frustration naturally follows. It's been a punishing stretch of games to start the season, and a key player has been out for half of them, but the Spurs are still working on controlling what they can control.

"Spirits are still up, guys are still communicating and talking trying to figure this thing out, going through the the pain points of a young team," said Young. "This situation, obviously, for us is tough because we're losing games, but it's how we're losing games, we're kicking ourselves in the butt by having mental lapses, or having a bad quarter... missed reads on the defensive side of the ball, missed opportunities on plays coming out of timeouts, all signs and indications of a young team just trying to learn. So the biggest thing is us just going out there and keep playing hard and make sure we keep putting forth the effort."

A common thread in the losses, regardless of effort level and opponent, is that San Antonio can't seem to execute in all phases of the game, and certainly not for the entire contest.

Coach Gregg Popovich spoke before the Spurs took on the Suns about how this group is willing, they just need to work on consistency. He lamented the 18% shooting from outside in the last game, a notable Achilles heel for this team early, but he said it's bigger than whether or not the ball goes in the hole.

"Shooting has escaped us, especially in fourth quarters," Pop said. "In today's NBA if you don't make threes, there's a great chance you're going to lose no matter what happens, and if you have a bad night turnover wise or whatever, then you're really in trouble. We spend time so that they know exactly what the deal is, and to keep shooting. I don't care, it goes it doesn't go in, I don't care. I do, but I don't, if you know what I mean. There's nothing you can do about that, but as long as we're doing all the other things over time, hopefully that worm will turn and they'll become more confident in it. So it's really the path that we have to go."

"The one thing about me is, I'm gonna say what I need to say," Young said. "I think one of the biggest things we all realize that we're tired of getting our butts whooped. We want to go out there and want to win every game possible, and we want to put out that effort, and if we put out 120% effort or 100% effort, we can we can go home and look ourselves in the mirror and say we did all we can. That's the one thing that we're faced with each and every game, knowing that we can put out the effort and we can go out there and play."

Effort and energy is something that each player needs to bring, but trust and communication are areas for the entire collective to improve on.

"We have to play for one another, we still don't fully trust each other out there sometimes on the court defensively," Young said. "I think the biggest thing is just, when you're getting into a guy, you feel that a guy's not behind you, he's gonna be hugging this guy, he's not gonna come with the help that needs to help, the trust level goes down. Just proving that we're gonna be there for each other, I think that's when the trust level starts to jump up."

Young said he was impressed with how Vassell led that players-only meeting, and shared his message as a veteran in the locker room.

"The one biggest thing that I did leave the guys with was, there's not going to be a changing point unless it starts to hit here," Young said, pointing to his chest. "When everybody starts to feel the same way about it hitting their hearts, and it starts to weigh heavy on their hearts, then that's when we're gonna have some change. That film is a hard film, that's hard pill to swallow, that's a hard film to try to take care of. So you will do whatever it takes not to feel that feeling again. I think that's when we're gonna see a curve and a change and we were it was going on out on the court."