Coach Pop spoke about lessons learned from the bubble, new roles for LaMarcus Aldridge, DeMar DeRozan and the young players, and injuries to a few key guys. 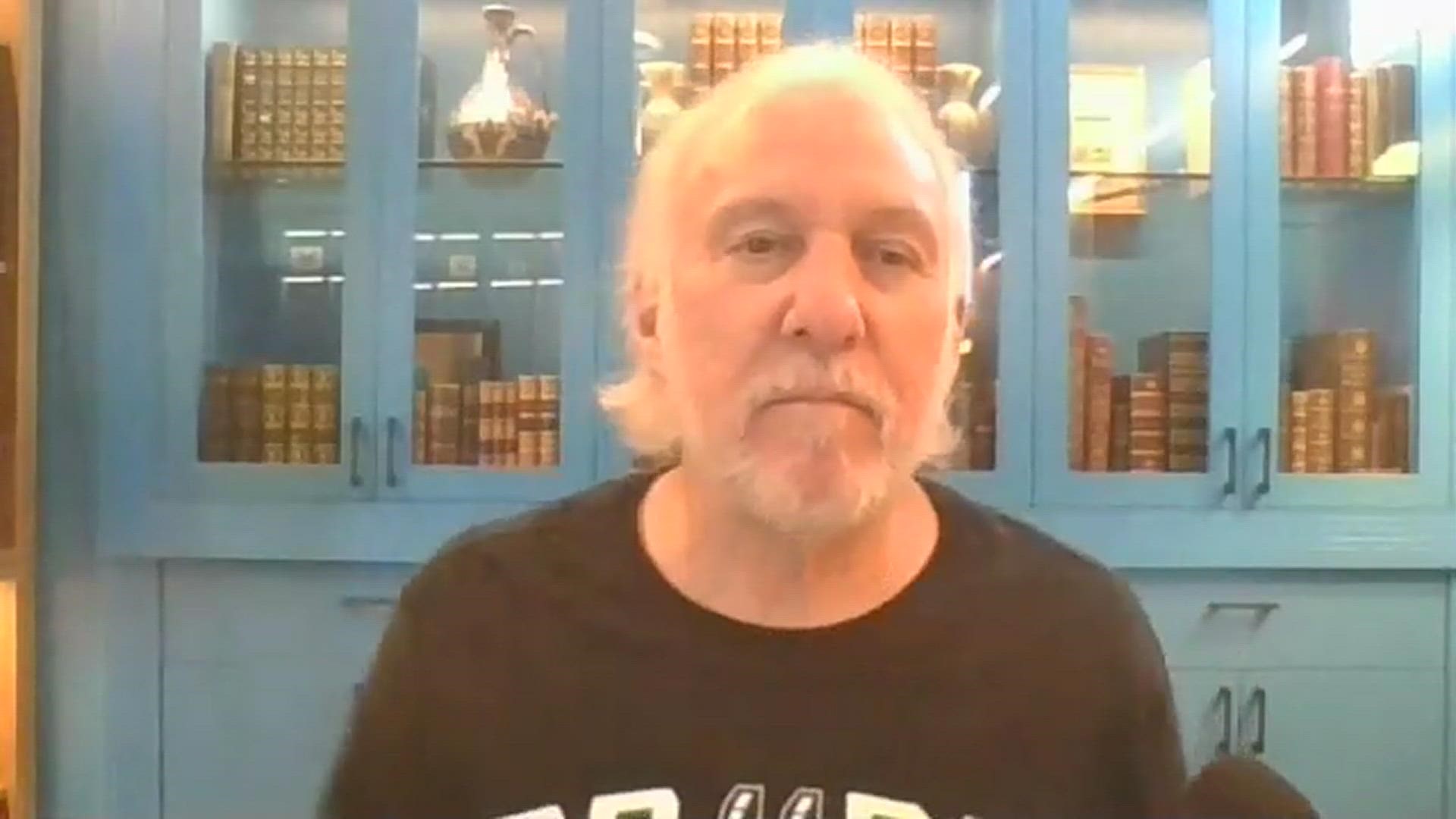 SAN ANTONIO — If you're still wondering what the Spurs are doing following an uncharacteristically bad season and a characteristically boring offseason, Head Coach Gregg Popovich laid it out in pretty clear detail at his media day on Tuesday.

A young, scrappy group of Spurs helped make the Disney bubble performance an optimistic bright spot in an otherwise dreary campaign, and Pop put into words what the roster moves in the past few weeks have said quite plainly if not loudly: The Spurs liked what they saw and want to see more.

"The strategy, the philosophy, the way we play is going to stay the same, and everybody's going to have to adjust to that because the guys did a great job, they enjoyed it," Popovich said. "We changed our approach as far as practice was concerned, how we wanted to teach. The young players really took time to understand what we were doing."

Pop noted that there's a mish-mosh of players coming in and out of the fold. LaMarcus Aldridge and Trey Lyles are coming back after injuries kept them out of the bubble, and Devin Vassell and Tre Jones came in through the draft, but a few of those young players who broke out in the bubble probably won't be healthy to start the year.

Keldon Johnson (foot), Derrick White (toe), and Quinndary Weatherspoon (knee) are all dinged up, and will likely miss at least the first games of the season.

Johnson demonstrated proficiency as a brutally-efficient 3-and-D wing in the bubble, while White upped his percentage from deep by a little and his volume by a lot. They're two of the best defenders on the team, and their presence will be missed on both ends.

After a large contingent of fans asked how the rookies would get any playing time with so many guards on the roster, injuries have made the answer clear, for at least a little while. Vassell and Jones may be thrown into the fire right away out of necessity, so it's a good thing they happen to be pretty seasoned players.

Lonnie Walker IV will likely reprise the starting role he slid into in Orlando, and they'll need him to hit threes at a high volume after making a team-high 41% last year.

Out of the gate, the depth chart may look something like this:

Pop made it clear that no matter who plays, how they play will look like it did at Disney: tough on defense and freaky fast in transition.

Based on the series of simple moves San Antonio has made so far in the offseason, it's clear that everyone in the organization, including Pop, is on the same page about letting the versatile, athletic young core do their thing. Popovich also mentioned how veterans stepped up as leaders who aided with development.

"People like DeMar and Rudy were great in mentoring these guys, and actually ended up changing some of the ways they have played over the years pace-wise, making defense more of a priority," Popovich said. "They bought in, they really enjoyed the young guys, and melded together with them, so those two guys I was really proud of because they became leaders in that sense. The growth that took place there in some ways was unexpected, but it happened, so we're just gonna go forward from what we did there."

That's without mentioning Patty Mills, who basically took an assistant coaching role to let the young guys get some burn.

Some fans fear that bringing Aldridge back into the rotation will slow down the speed achieved in the bubble, and thereby slow down the progress made there. That would be a concern if the 35-year-old big man stuck to the post-up ways that made him an All Star seven times over, but Popovich made it clear that he's changing his game to fit with this dynamic young group and the modern NBA.

"I think that LA will have no problem adjusting to how we play because he wants to win, we want to get back in the playoffs, and he is committed to taking another huge step as far as becoming more of a three-point shooter, which is necessary in this league for success, we all know," Popovich said. "He took a big step last year, he's taking even a bigger step this year. His workouts all summer long and into the fall have centered around that, and he's bought into that and knows how much that can help us, so I'm excited for the whole group to come together."

Aldridge shot 39% from deep last season, and if he continues to grow as a stretch 5 he adds immense value. He's a decent defender who won't have to cover up as many lapses by teammates on the perimeter this year, and he can still be an effective scorer by picking and popping or rolling and punishing mismatches. He gets boards, throws outlet passes, and is developing a threatening shot from the top of the arc as a trailer in transition.

Popovich said not to expect such a defense-bending aerial assault from Aldridge's current backup Jakob Poeltl, who just signed a three-year deal worth about $27 million to stay with the team. He said that he wants to be a starter soon, and Pop spoke a bit about what he can do to add to his game.

"He's a respectful, disciplined player who understands his role really well as far as rebounding, running the floor, setting picks, trying to guard the rim, all those things, but he needs to expand his game in the sense of, you know he was a PAC 10 Player of the Year, he actually scored points. Maybe he's gotten the impression that I don't want him to, so that's my fault. He's gotta get the ball to score once in a while, but he's got to change his mentality to a degree. He's not gonna be our leading scorer, but to be a threat. That's something that we will spend time with him on because he can actually do some good things down on the block. He's not gonna be a three-point shooter or anything like that, but his fundamentals are sound, he can be aggressive, and I think that in that sense he can help us so that he has to be guarded."

One player who won't be back is Bryn Forbes, who developed from an undrafted Austinite into an NBA starter (underqualified as he may have been). Popovich spoke about the bittersweet result of losing him to the Milwaukee Bucks in free agency.

"Of course we're happy about DeMar and Jakob, that goes without saying, but Bryn was a tough one," Popovich said. "He's gonna be in a great position with Coach Bud and the Bucks, a great group developing a great culture, and having a chance to win a championship up there, I'm thrilled for him. The melancholy part is obviously he's a great kid, we put a lot of years into developing him, we're so proud of him for where he is now compared to when he came, being undrafted. The coaches did a wonderful job with him in that development, so the combination of what a player he became and what a wonderful human being he is, his mom, his family, that was a tough one, but that's the business. You can't have everybody that you want, there are limits financially, and you just hope that people that have to move on land in good places. He obviously has, so happy for him, but at the same time sad."

Forbes should excel off the bench for a team like that, but the long-term decision to start him last year despite his one-dimensional game hurt this team's chances of winning individual contests and competing for a playoff spot.

It may seem like small potatoes that Popovich and the Spurs moved on from Forbes and Marco Belinelli while bringing back young, defensive-minded players and drafting well, but it signals a willingness to bet on those guys and drastically change the way they play.

The roster looks very similar, but those same pieces will be deployed an entirely different way with knowledge gained from a failed pre-bubble portion of the season and lessons learned from a successful, obvious adjustment.

Aldridge will space the floor more, DeRozan will act as a setup man and closer, and the core that San Antonio has built through the draft in recent years will play swarming defense and fluid offense around them.

That might be enough to get back into the playoffs, but probably isn't enough to get the Spurs immediately to the finish line in the Race for Seis. Someone jokingly asked the Team USA coach about Game 7 of the Finals being scheduled for just two days before the Olympics start.

"I don't think we're gonna let the Finals go seven games, we'll get 'em before that," Popovich said in perfect deadpan before his face cracked open with a knowing laugh.

Fans who are already down on this season feel that way because they believe Popovich and the veteran players are too rigid or stubborn to change the way they play. In reality, the players, coaches, and front office have already changed quite a bit since coronavirus shut down play in March. Before the start of the 2020 season, Popovich made it clear that he and everyone around him have learned from 2019.

"The bottom line, in all frankness, is I don't remember winning a championship last year, I don't remember being in the playoffs, so it's time to make a change, play a different way, demand it, and move forward," he said.

So if you're still confused about the direction, it's as simple as it always has been for this coach and this team: forward. 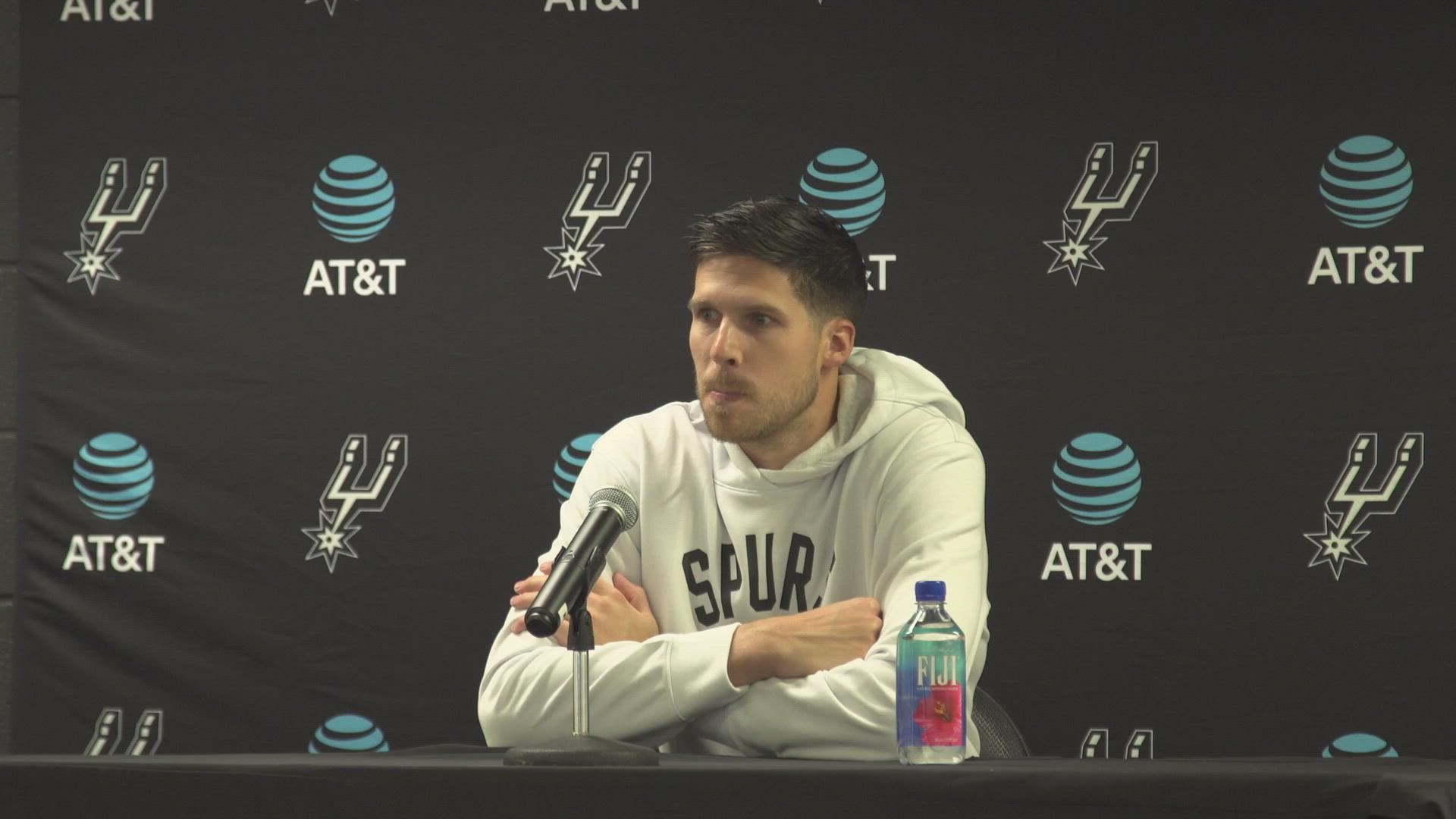