Spurs will open playoffs against Nuggets on Saturday in Denver

SAN ANTONIO – The Spurs are headed to the playoffs as the No. 7 seed in the Western Conference, avoiding a second consecutive first-round matchup with defending NBA champion Golden State.

LaMarcus Aldridge finished with 34 points and 16 rebounds, leading the Silver and Black to a 105-94 victory over the Dallas Mavericks on Wednesday night in the regular-season finale for both teams at the AT&T Center.

San Antonio will play Denver in the first round of the playoffs, which start this weekend. The Nuggets clinched the No. 2 seed with a 99-95 victory over Minnesota in Denver later Wednesday.

The first two games of the best-of-seven series will be played at the Pepsi Center in Denver. Game 1 is scheduled for 9:30 p.m. Saturday. The first game in San Antonio will be next Thursday, April 18, at 8 p.m.

The Spurs and Nuggets split their four-game series during the regular season, with the home team winning each time. Denver routed the Silver and Black 113-85 in their last meeting April 3.

A San Antonio loss Wednesday night, coupled with the Los Angeles Clippers' overtime win against Utah, would have dropped the Spurs to the No. 8 seed and a first-round series against No. 1 Golden State. The Warriors eliminated the Silver and Black in the opening round last year, winning four of five games in the series.

The Spurs (48-34) and No. 8 Clippers finished with identical records, but the Silver and Black took the higher seed because they owned the tiebreaker.

San Antonio's chances of moving up to the No. 6 seed ended when Oklahoma City beat Milwaukee on the road Wednesday night.

Spurs coach Gregg Popovich was short when he was asked if he felt good about where the team stands heading into the postseason.

"It doesn't really matter what I feel," Popovich said. "We are where we are and we're going to the playoffs."

An emotional Dirk Nowitzki acknowledges the cheers from the crowd before the Mavericks-Spurs game Wednesday night at the AT&T Center.
Photo by Antonio Morano (bit.ly/XR79FT) / Special to KENS5.com

The Spurs beat the Mavs (33-49) for the 15th time in their last 17 meetings and swept the season series against Dallas for the first time since the 2015-16 campaign.

Wednesday night's game was the last in the stellar 21-year career of Dallas forward Dirk Nowitzki, who was honored by the Spurs with a video tribute before the opening tip. Nowitzki wiped tears from his face as he acknowledged cheers from the crowd after being the last Dallas starter introduced.

Nowitzki finished his final game with a double-double, scoring 20 points and grabbing 10 rebounds.

Nowitzki, who battled an ankle injury throughout his final season, said he had mixed emotions about his final campaign.

"It's been a long season here this year (and a) tough one with my ankle, and so I'm kind of glad it came to an end," Nowitzki said. "But it's also bittersweet, of course.

Nowitzki made his last shot, a 20-footer with 49.7 seconds left. Guarded by reserve center Drew Eubanks, Nowitzki brought a roar from the crowd when he launched his final field-goal attempt.

"I think Eubanks actually backed up," Nowitzki said. "Pop was yelling at him, 'Get away from him, please let him make a shot.' I was able to knock it down and that was definitely a fun moment."

Nowitzki said the atmosphere for the game was "fantastic" at the AT&T Center.

"It felt almost like a home game," he said. "Honestly, when I was at the free-throw line and I heard the MVP chants, and pregame, that got me all emotional and that was unbelievable. Thanks to the Spurs organization. That was super classy.

"I have nothing but respect for their franchise here, for Popovich for R.C. (Buford, Spurs general manager), for what they've built here. Ever since I've gotten into the league, they've been great and have been in the playoffs, so nothing but respect."

The crowd cheered loudly every time Nowitzki scored and gave him a standing ovation after the game. He spoke briefly with Popovich and the two hugged before Nowitzki acknowledged the fans again as they chanted his first name.

"Everybody – players, fans, coaches and staff – got to witness history, watching him play his last game," Popovich said of Nowitzki. "He played a fine game, which was great. It's not surprising. He's such a special guy for so many different reasons.

"As I said before, I feel honored and blessed to have been able to watch him all these years because he's one of the consummate professionals, and he never wavered from that. He played at a really high level all the time. (He was a) great teammate and ferocious competitor. We'll miss him."

Aldridge, who hit 15 of 21 field-goal attempts, recorded his 32nd double-double of the season. DeMar DeRozan finished with 19 points for the Spurs, and added five rebounds, four assists and three steals.

The Silver and Black also got double-figure scoring from Derrick White (14) and Bryn Forbes (10). Forbes nailed 3 of 6 three-pointers and White was 2 of 2 from long distance. Davis Bertans scored nine points on 3-of-8 shooting from beyond the arc.

Dallas played without standout rookie Luka Doncic, who was sidelined with a left thigh contusion. Justin Jackson and Courtney Lee scored 14 points each for the Mavs. Devin Harris (12) and Jalen Brunson (11) rounded out Dallas' double-digit scoring. 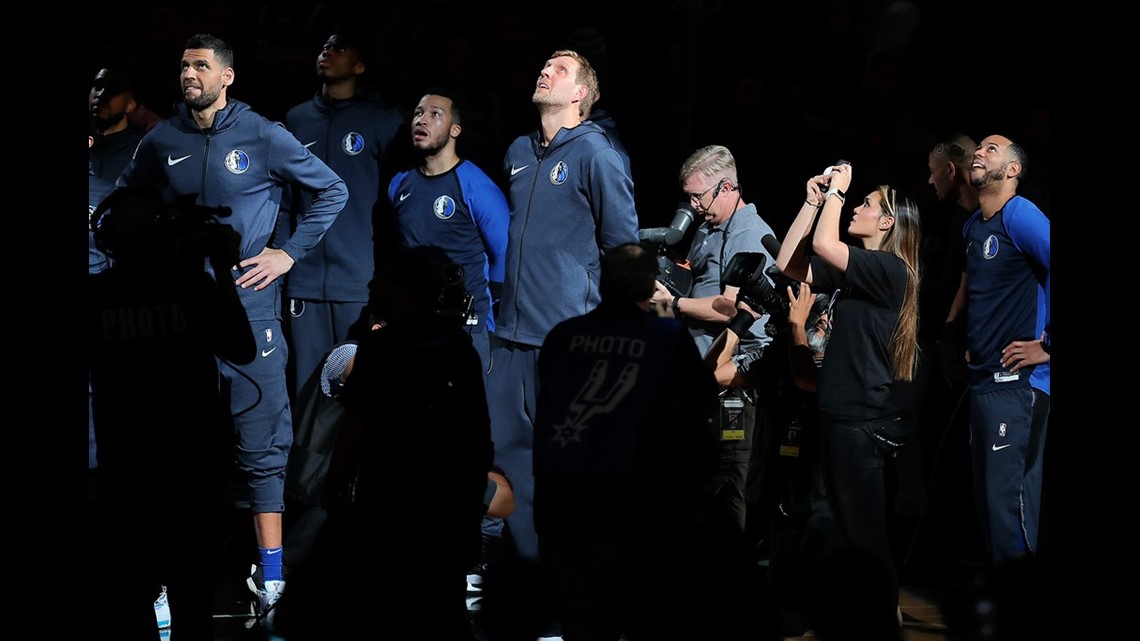 Led by Aldridge, who had 20 points and 10 rebounds, the Spurs led 57-37 at the half. Davis Bertans nailed a three-pointer with 1.6 seconds left to give San Antonio a 20-point lead at the break. The points were the first of the first half for Bertans, who 0 for 4 before hitting the three-pointer.

Aldridge got his 20 first-half points on 8-of-12 shooting. DeRozan had 11 points and was the only other Spur in double figures at the half.

Harris led the Mavs' first-half scoring with 10 points. Nowitzki was 2 of 9 from the field and had four points in the first two quarters.