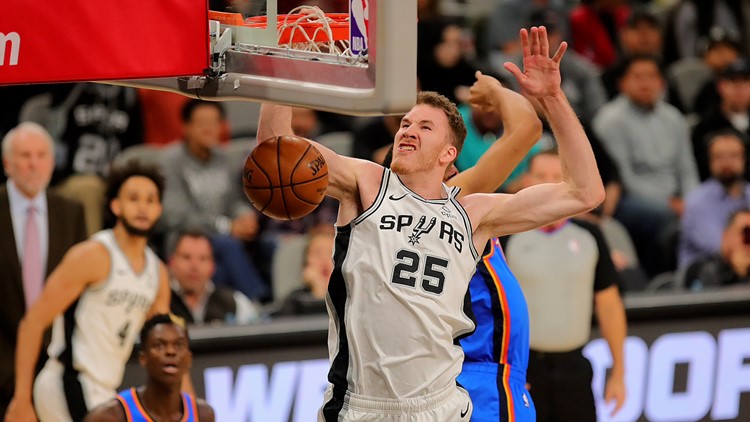 GAME BLOG: Thunder run away with win in second half, defeat Spurs 109-103

San Antonio was outplayed by Oklahoma City in the second half, outscored 63-48 as they couldn't turn a halftime lead into a home win against a strong Thunder squad. San Antonio falls to 15-18 with the loss.

While Aldridge and DeRozan combined for 52 points, only one other Spur, Lonnie Walker, reached double-digits in points. They shot 44% from the field, and 43% from beyond the arc.

Up next for the Spurs is a Saturday night matchup against the Milwaukee Bucks, with tipoff set for 7:30 p.m. CT.

With less than 3:30 remaining in the game, San Antonio remains down by six points to the Thunder. The Spurs have been outscored 53-38 in the second half, and their shooting percentage has cooled down to 42% from the floor.

San Antonio was outscored by seven in the third period, but the Spurs still find themselves up by two entering the final quarter.

Oklahoma City has come back with a vengeance after halftime, outscoring the Spurs 24-15 so far in the third quarter to tie up tonight's game, 70-70. Shai Gilgeous-Alexander has tallied 14 of the Thunder's 24 points this quarter as the visiting team doesn't plan on going down quietly.

Most the second quarter saw San Antonio up by a fair margin, and a fair margin is where things stand at halftime after the Spurs propelled themselves out to a 55-46 lead.

DeRozan and Aldridge have combined for 31 first-half points as the Spurs shoot 47% from the floor, including 50% from three-point land.

An 12-3 by San Antonio has allowed the home team to re-take the lead with gusto three minutes into the second quarter.

This game is all knotted up at 27-27 after a quarter that saw the Spurs take command early, the Thunder storming back and Jakob Poeltl taking no prisoners with this massive slam.

The Thunder are shooting 52% from the floor and the Spurs just a few ticks lower, but San Antonio has the three-point edge so far, having made four of 10 attempts compared to the Thunder's 2-for-7 mark.

DeRozan leads all players with 12 points.

San Antonio maintains its lead, 23-20, with less than three minutes remaining in the opening period as DeMar DeRozan begins to heat up; he's scored San Antonio's last five points, and has a game-high 10 in the early going.

After six-plus minutes of play, San Antonio has a slim two-point lead over Oklahoma City at the AT&T Center, led by eight early points from LaMarcus Aldridge.

The Oklahoma City Thunder have won seven of their last eight games, but you can bet San Antonio will be motivated against them as the Spurs try for their first three-game winning streak since going 3-0 to start the season.

The Spurs were mired in a perfectly average stretch to finish 2019, having alternate wins and losses in eight straight games. That streak finally ended Tuesday, when an OT defeat of Golden State gave the Spurs consecutive wins since early December.

Aldridge was key to San Antonio's success in that matchup; he scored 39 points to lead his team to victory.

"LaMarcus, obviously, was a beast," head coach Gregg Popovich said after the game. "He was really good. He shot quickly, he made quick decisions and he also passed it out of there when he got doubled or there was a crowd."

San Antonio faces a tougher test in the 18-15 Thunder, who have hit their stride as of late and lost consecutive games just once last month.

Neither the Spurs nor the Thunder are expected to have any players sidelined for Thursday night's game. Tipoff is at 7:30 p.m. CT. Follow along here for updates.

RELATED: SPURS GAMEDAY: Win over OKC would give S.A. three straight wins for only second time this season