Spurs playoff scenarios: What needs to happen for San Antonio to make the play-in game?

The Spurs still have a chance at the playoffs, but they'll need some help. This story will be updated as a wild race for the eighth seed in the West wraps up. 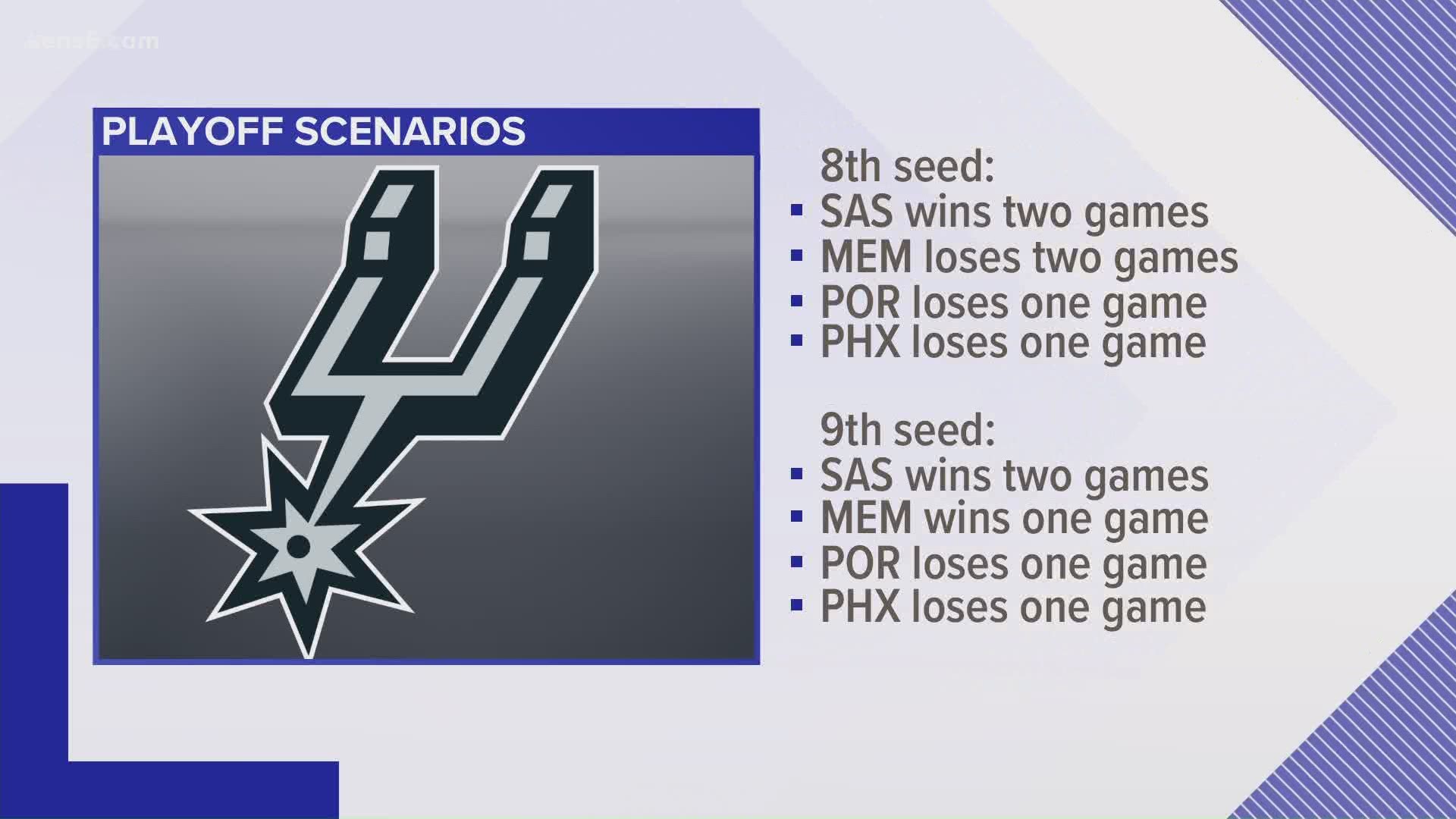 SAN ANTONIO — After San Antonio won on Tuesday and watched Phoenix and Portland win and Memphis lose, their playoff prospects against those teams remained the same. The Spurs need to beat Utah and see two of the Suns, Grizzlies and Blazers lose in order to pass those teams and make it to the play-in game

It would have been nearly impossible for the Spurs to make the playoffs if they didn't defeat Houston, but San Antonio got Derrick White back and took advantage with James Harden out, winning 123-105.

Derrick White has been one of the best players in the bubble, drilling threes, guarding everybody, and initiating the offense effectively until he banged knees in the win over New Orleans. He was listed as questionable, and Coach Popovich said he'd be a game-time decision, but he played.

Pop said it looked like his legs weren't quite there, as he shot just 1-8 from three, but he played with the same attacking, intelligent mindset that he always does. For full coverage of that game including interviews, highlights and analysis, click here:

The Spurs' final game will come against Utah, and it's unclear if the Jazz will have any reason to play their starters and compete.

Phoenix is 7-0 in the bubble after 35 points, 9 rebounds and 7 assists in a win over a skeleton crew 76ers team. Ben Simmons, Joel Embiid, Al Horford, Tobias Harris, and Josh Richardson all missed the game. Those players combined for 80 points against the Spurs in a 132-130 win over San Antonio last week.

On Tuesday, Coach Pop mentioned that loss as a big game, and again said that it was a mistake to leave a shooter open for three at the very end.

Mikal Bridges added 24 points for the Suns on Tuesday, and Dario Saric kicked in 18 off the bench. With the Suns' win, their last game will be on Thursday against the Dallas Mavericks. The Spurs need Phoenix to lose that game in order to pass them.

If the Suns win, their last game will be on Thursday against the Dallas Mavericks. The Spurs need Phoenix to drop a game in order to win out and pass them.

Memphis came into the Bubble as the eighth seed, but they've lost Jaren Jackson Jr. for the season and they've lost all but one game, putting their playoff hopes in serious doubt.

Jayson Tatum scored 29 points on 13 shot attempts, leading the Celtics to a win over Memphis.

Obvious Rookie of the Year Ja Morant finished with 26 points and 13 assists but didn't have enough help.

Memphis needs to win to guarantee a spot in the play-in game. The Spurs can pass them if they beat Utah and the Grizzlies lose to the Bucks.

The Blazers had a tough battle against the Mavericks, but won 134-131 behind a career-high 61 points for Damian Lillard.

Lillard missed two free throws when the Blazers lost to the Clippers, but Patrick Beverly's decision to clown Dame from the bench may end up biting the Spurs.

Dame doesn't need extra motivation in this playoff hunt, but he got it. He dropped 51 in Portland's next game, which was a close win over Philly on the second night of a back to back. It might be Dame Time for the rest of the season.

Portland is a completely different team than they were in the regular season now that Jusuf Nurkic is back, and Gary Trent Jr. is hitting an unbelievable number of threes in the Bubble.

The last opponent on the schedule for Portland is a shorthanded Brooklyn team that has played surprisingly well in the bubble. They'll have nothing to play for in that final game, but the Blazers will be able to secure the eighth seed with a win.