SPURS GAMEDAY: Silver & Black have no illusions about challenge they'll face against Nuggets in Game 4

Up 2-1 in first-round playoff series, the Spurs expect Denver to throw everything but the kitchen sink at them Saturday at the AT&T Center. 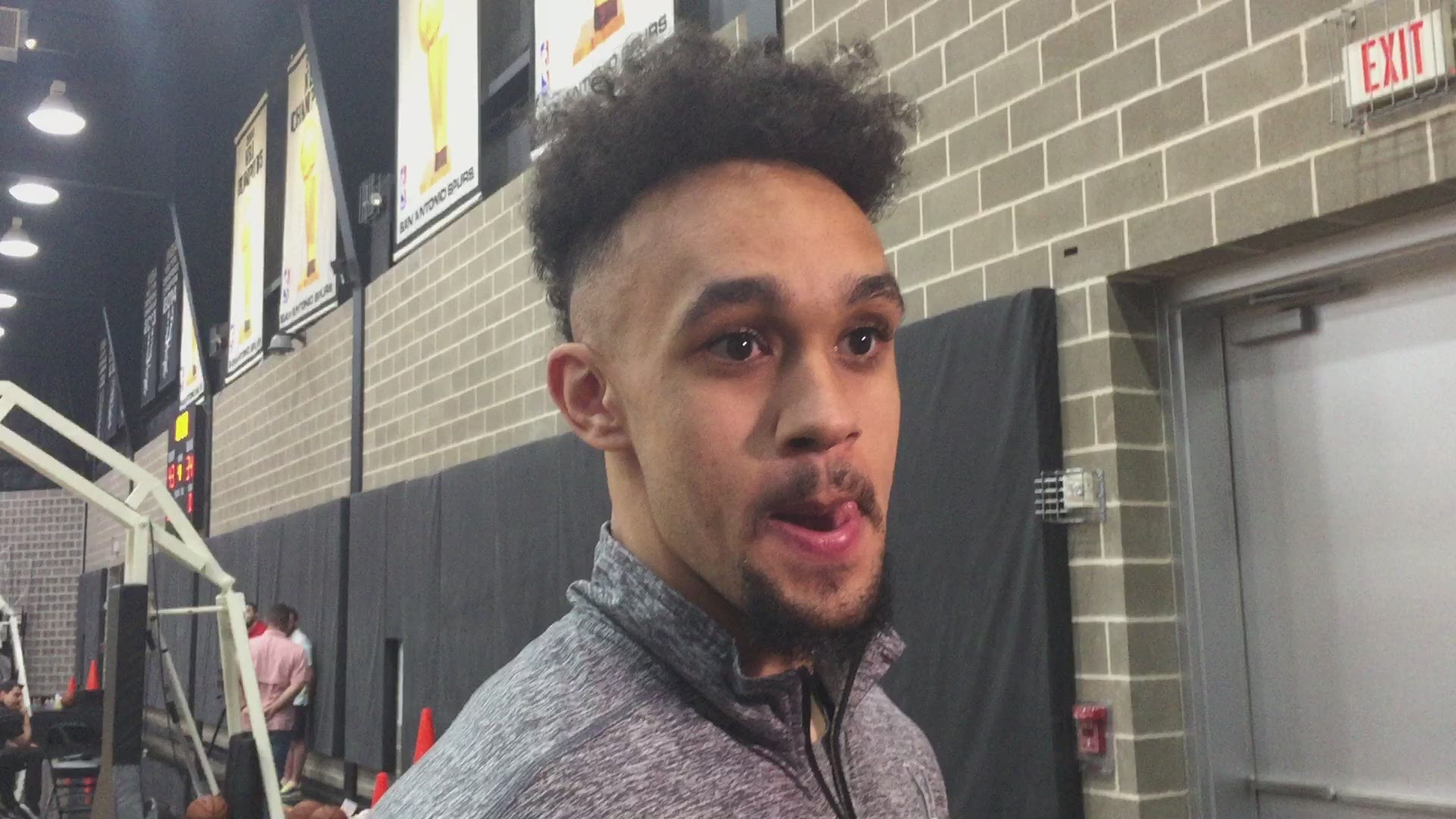 SAN ANTONIO – Gregg Popovich has said it many times during his long career as the Spurs’ coach: A team coming off a loss in a playoff series is always more motivated than the team that won the previous game.

Bearing that in mind, the Denver Nuggets should not lack for motivation after losing to the Silver Black and Black 118-108 in Game 3 of their first-round playoff series Thursday night at the AT&T Center.

The Spurs bounced back from a road loss to the Nuggets in Game 2 to take a 2-1 lead at home in the best-of-seven series.

The Nuggets haven’t beaten the Silver and Black in San Antonio since March 4, 2012. That’s so long ago that Spurs point guard Derrick White, who went off for a career-36 points in Game 3, was a 17-year-old senior at Legend High School in Parker, Colo., located 25 miles southeast of Denver.

“They’re going to come out hungry, come out aggressive,” White said Friday after the Spurs watched film of Game 3 and had a light workout. “So we’ve just got to be ready for their physicality and just make adjustments throughout the game for whatever they throw at us.”

White was a force on both ends of the floor in Game 3, making 15 of 21 field-goal attempts and finishing with five rebounds, five assists and two steals. He put the Nuggets on their heels from the get-go, scoring 10 points in the first quarter and finishing the half with 26 to tie his previous career high. 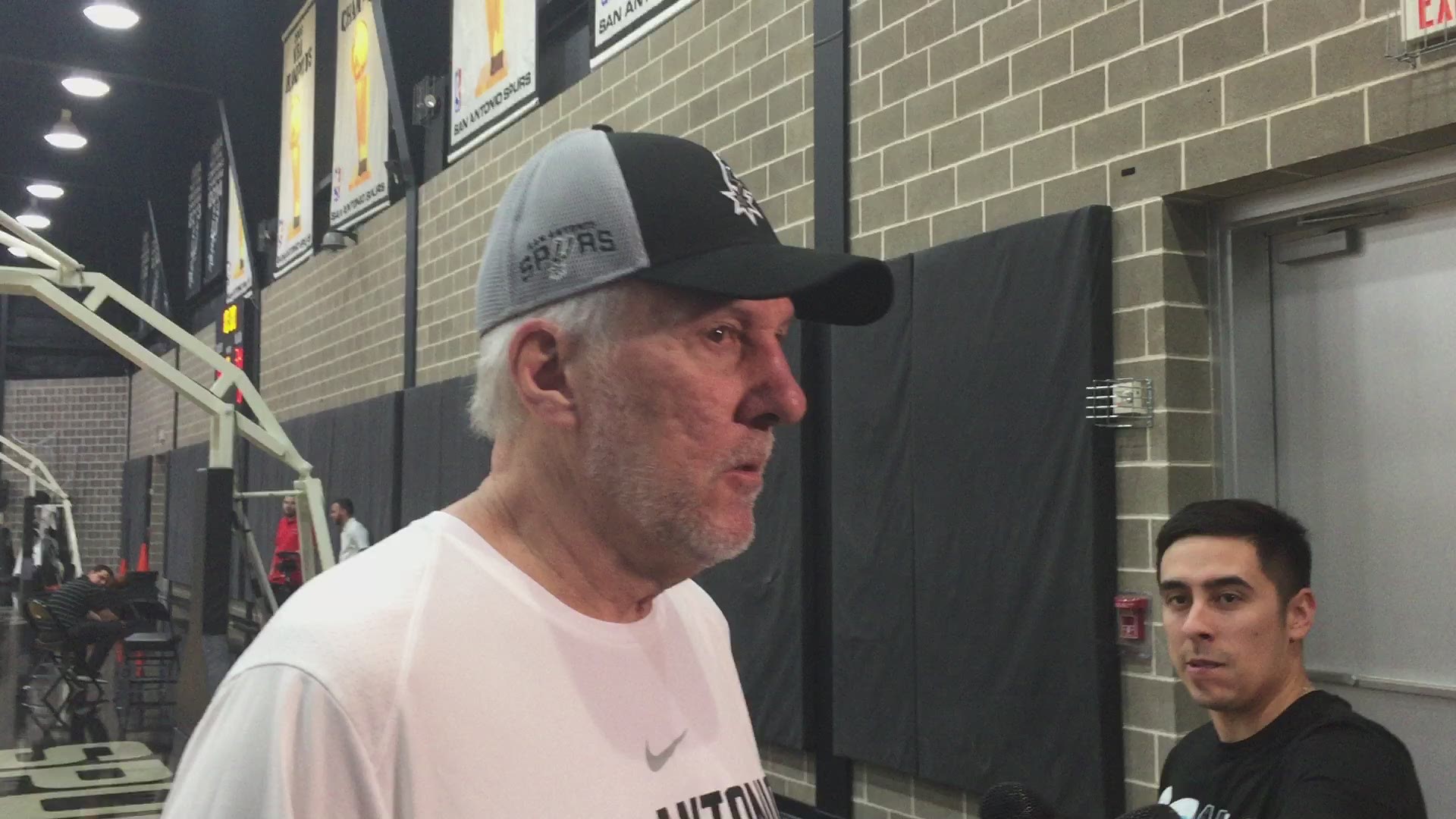 "Derrick played great," Spurs forward Rudy Gay said. "He stepped up to the challenge. That's what the playoffs are about, stepping it up, especially when we need you, and we needed him last night. It was good to see him progress like he has."

Guarded primarily by Jamal Murray, White got practically every shot he wanted and got to the basket consistently. More importantly, he scored on most of those drives.

“We couldn’t stop him,” Denver coach Mike Malone said of White. “He was impressive. From jump street, he attacked, he got wherever he wanted and he finished. He was into us defensively. That was a hell of a performance for a young player.”

White shrugged his shoulders Friday when he was asked what adjustments he thinks the Nuggets will make to slow him down.

“I’m not sure,” he said. “I’m just going to feel it out, just try to be aggressive. Just try to make an adjustment throughout the game.”

White was so hot in the first half that he converted 11 of 15 field-goal attempts. He scored 16 points on 6-of-9 shooting in the second quarter, helping the Spurs erase a 10-point deficit midway through the period. White ended the quarter with a steal and fast-break dunk that put the Silver and Black ahead 61-58 at the half.

“I wanted to come into the game aggressive,” White said of his fast start. “Good things were happening for me. They had a lot of focus on LA (LaMarcus Aldridge) and DeMar (DeRozan), so there’s not as much attention on me. I was just trying to be aggressive and help them out.” 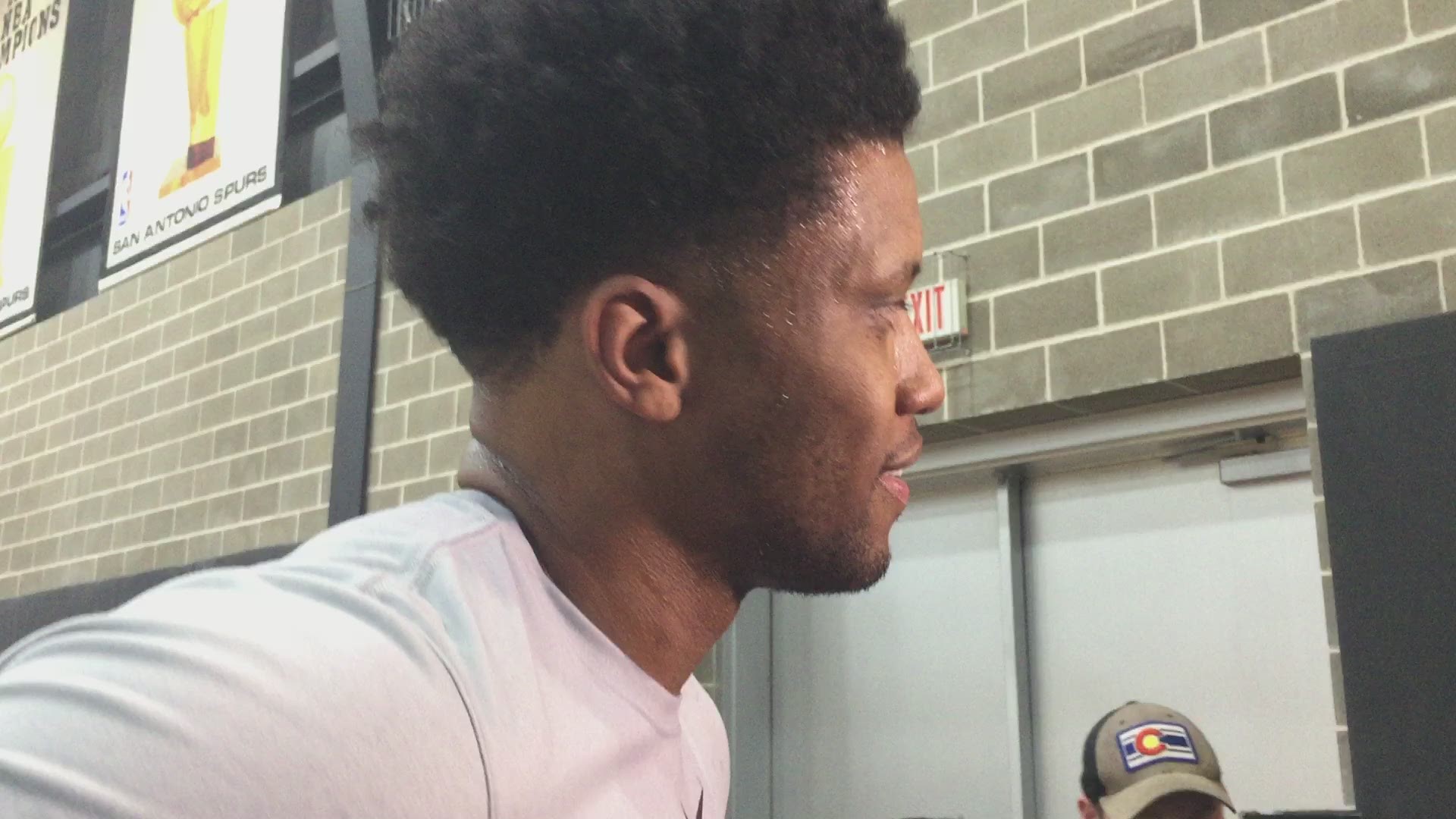 The Spurs were up 31-22 after one quarter, but the Nuggets roared back with a 16-0 run to go up 38-31 with nine minutes left in the second period. Denver extended the lead to 10 points before San Antonio started to chip away at the deficit. The Spurs regained the lead, 53-22, on a White layup that capped a 13-2 run with 2:38 left in the half.

A second-year pro, White was selected by San Antonio with the 29th pick in the first round of the 2017 NBA draft. He spent most of his rookie year playing for the Spurs’ G League team in Austin, and was thrust into the starting spot at point guard last October after Dejounte Murray sustained a season-ending knee injury in a preseason game.

White is the Spurs’ second-leading scorer after three playoff games, averaging 23 points while shooting a sizzling 69 percent (29-42). DeRozan (24.7) is the team’s top scorer and Aldridge (19) is third.

A hard-nosed defender, White helped limit Denver guard Jamal Murray, the star in the Nuggets’ Game 2 victory to six points on 2-of-6 shooting. Murray sparked the Nuggets’ comeback from a 19-point, third-quarter deficit in Game 2, hitting 8 of 9 shots and scoring 21 of his 24 points in the fourth period.

Murray did most of his damage while being guarded by White, who seethed quietly after the game.

“I just have a chip on my shoulder,” White said. “This is the way I would play since I was young. I am just trying to get out there and compete and have fun.”

While he had a career-scoring night in Game 3, White left no doubt about his top priority every time he steps on the court.

“I take a lot of pride defensively,” White said. “I know that I’m going to have to bring it each game, so just getting stops or whatever it might take to get us out (in transition). I mean, we’re a tough team.”

The Silver and Black won Game 3 because they owned the paint, outscoring the Nuggets 62-42. San Antonio won the rebounding battle 45-37 and finished with a 15-10 edge on the offensive boards.

“We did a good job of that,” Popovich said. “We made pretty quick decisions. Didn’t settle too much. We’ll probably have to continue to try to do what we’ve been trying to do all year. But it’s no different than what Denver wants to do.

“Everybody wants to play aggressively. Everybody is in attack mode. So it’s nothing new and it’s not a surprise for any team. Everything begins with who’s the aggressive team, who’s the attack team. You’ll see that from both sides.”

The Silver and Black’s top priority is to slow down Jokic, who is averaging 17.7 points, 11.7 rebounds and 9.7 assists in is first career playoff series.

“We’re doing the best we can,” Popovich said of the matchup with Jokic. “He’s talented. He’s clever. He’s got a high basketball IQ. He does basically everything. He’s not going to be stopped, but trying to pay attention to him is pretty important.”

Aldridge and center Jakob Poeltl have alternated guarding Jokic, a 7-footer from Servia.

“He’s (Poeltl) got a huge responsibility, along with LA, to try to guard the guy, try to diminish his effectiveness, which, I said, we know we can’t do totally. But whatever we get done in that regard helps.”