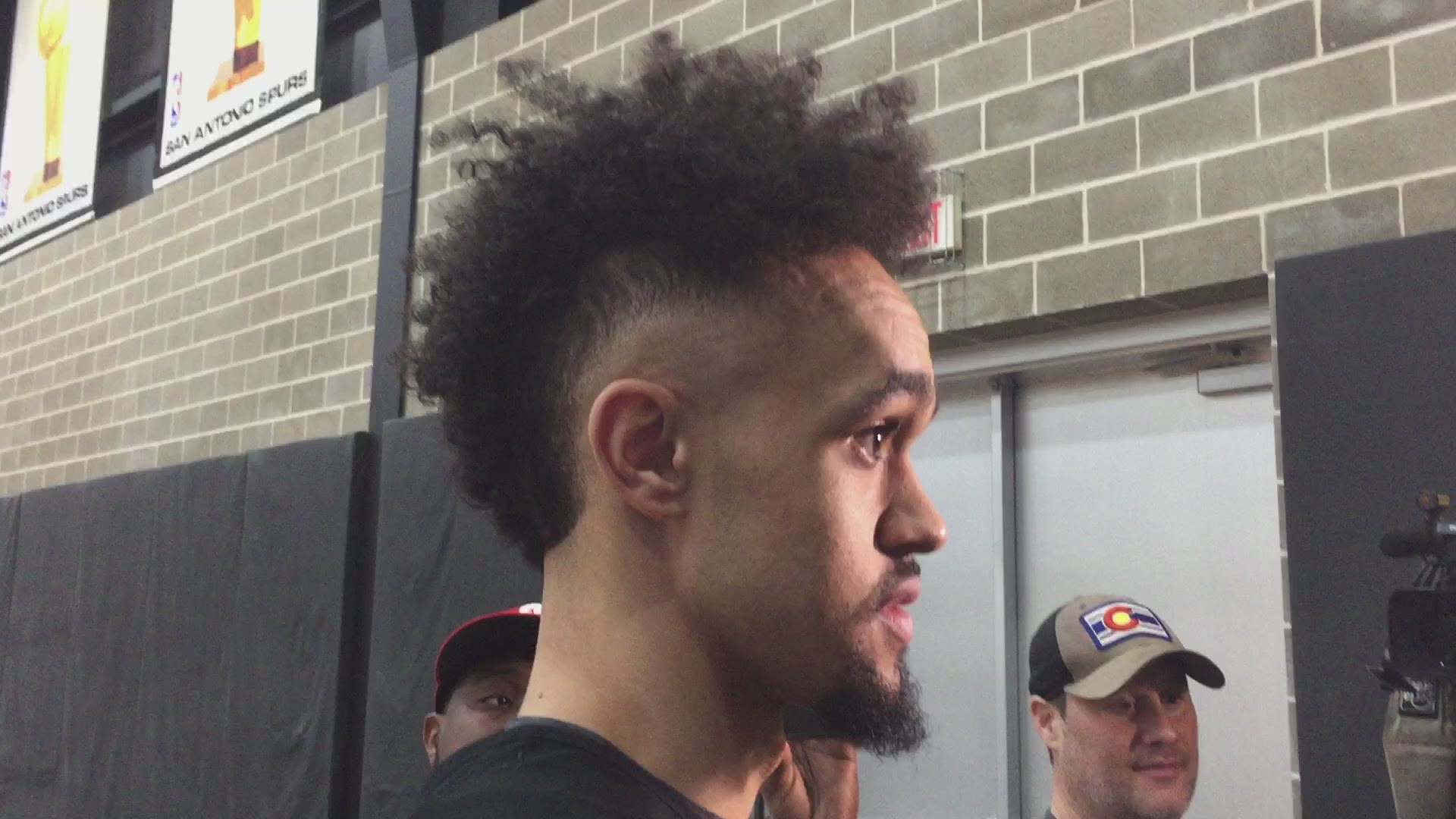 SAN ANTONIO – After getting a split on the road in their first-round playoff series against the Denver Nuggets, the Spurs now face the challenge of holding serve at home in the next two games.

Considering how the Nuggets stormed back from a 19-point deficit – twice – in a scintillating 114-105 victory that evened the series at a game apiece Tuesday night in Denver, that won’t be an easy task for the Silver and Black.

The former ABA rivals clash in Game 3 at 8 p.m. Thursday at the AT&T Center, where the Spurs have won 13 straight against the Nuggets. Denver hasn’t beaten the Silver and Black in San Antonio since March 4, 2012, when Spurs point guard Derrick White was a 17-year-old senior at Legend High School in Parker, Colo., about 25 miles southeast of Denver.

If not for a 21-point outburst by Nuggets guard Jamal Murray in the fourth quarter Tuesday night, the Spurs probably would lead the best-of-seven series 2-0. Murray, who was 0 of 8 and had only three points through three quarters, sparked Denver’s comeback, hitting 8 of 9 shots, including back-to-back three-pointers that put the Nuggets up 110-101 with 2:12 left.

“In the fourth, when I stepped on the court I just looked at the crowd,” Murray said. “I just took it all in, everybody waving the towels, I always dreamed of playing in a playoff game and it’s whited-out. It’s always been a dream of mine and to accomplish that, I think that’s what got me started and my teammates, G (Gary Harris), Coach (Head Coach Michael Malone), and Sap (Forward Paul Millsap), everybody told me to stick with it. I just stuck with it. They all believed in me and that got me going.”

The Spurs led by 19 with 5:19 left in the third quarter, but Denver trimmed the deficit to seven by the end of the period. With Murray virtually unstoppable, the Nuggets outscored San Antonio 39-23 in the fourth quarter.

While the loss was a gut-wrenching one for the Silver and Black, veteran guard DeMar DeRozan looked on the bright side after Game 2.

“We feel great,” he said. “We got Game 1. We fought, tried to get Game 2, but we got homecourt shifting our way. Now, it’s on us to go home and do what we need to do, understand if we take care of home, like we’ve been doing all year, we can come back here with an opportunity. We feel great where we’re at. We understood it wasn’t going to be a cake walk.”

San Antonio went 32-9 at home this season. The Nuggets went a league-best 34-7 on their home court and were 20-21 on the road. The teams split four regular-season games, with the home team winning each time.

Denver finished 54-28, only three games behind defending champion Golden State, to earn the No. 2 seed in the Western Conference playoffs. The youngest team in the NBA, the Nuggets are in the playoffs for the first time in six years.

The Spurs went 48-34 in the regular season and landed the No. 7 seed in the West. San Antonio made the playoffs for the 22nd consecutive year, tying an NBA record.

The Silver and Black are 5-1 in playoff series against Denver, but none of that history will matter when the teams meet in Game 3.

DeRozan led San Antonio with 31 points and seven rebounds in Game 2, while LaMarcus Aldridge and Derrick White finished with 24 and 17 points, respectively. White hit 7 of 11 shots, but he went scoreless in the decisive fourth quarter and finished the game without an assist.

Credit: (AP Photo/David Zalubowski)
Guard DeMar DeRozan scored 31 points on 11-of-19 shooting in the Spurs' 114-105 loss to the Nuggets in Game 2 of their first-round playoff series Tuesday night in Denver.

“Murray can get as hot as anybody in the league and he just got it going,” White said. “He started seeing the big basket. We just have to take a look at it, see what we can do and try to make our adjustments.”

“He was aggressive,” DeRozan said, when asked about Murray’s fourth-quarter shooting exhibition. “He was coming off looking to shoot, looking to score. He hit some key shots that if we got a couple of stops, we would’ve had it under control. You have to give him credit, but we’ve got to do a better job and not just rely on Derrick to make every shot tough on him.”

The Silver and Black went on a 14-0 run to go up by 19 (42-23) with 8:28 left in the first half. But the Nuggets showed their mettle, fighting back to cut the deficit to six before San Antonio settled for a 10-point lead at the break.

“They were hungry,” Spurs forward Rudy Gay said. “We knew that coming in. I guess mentally, we didn’t prepare like we should have. For most of the game, we had it pretty easy. We knew they were going to fight. They were at home. It’s tough to play here. We just have to be more disciplined.”