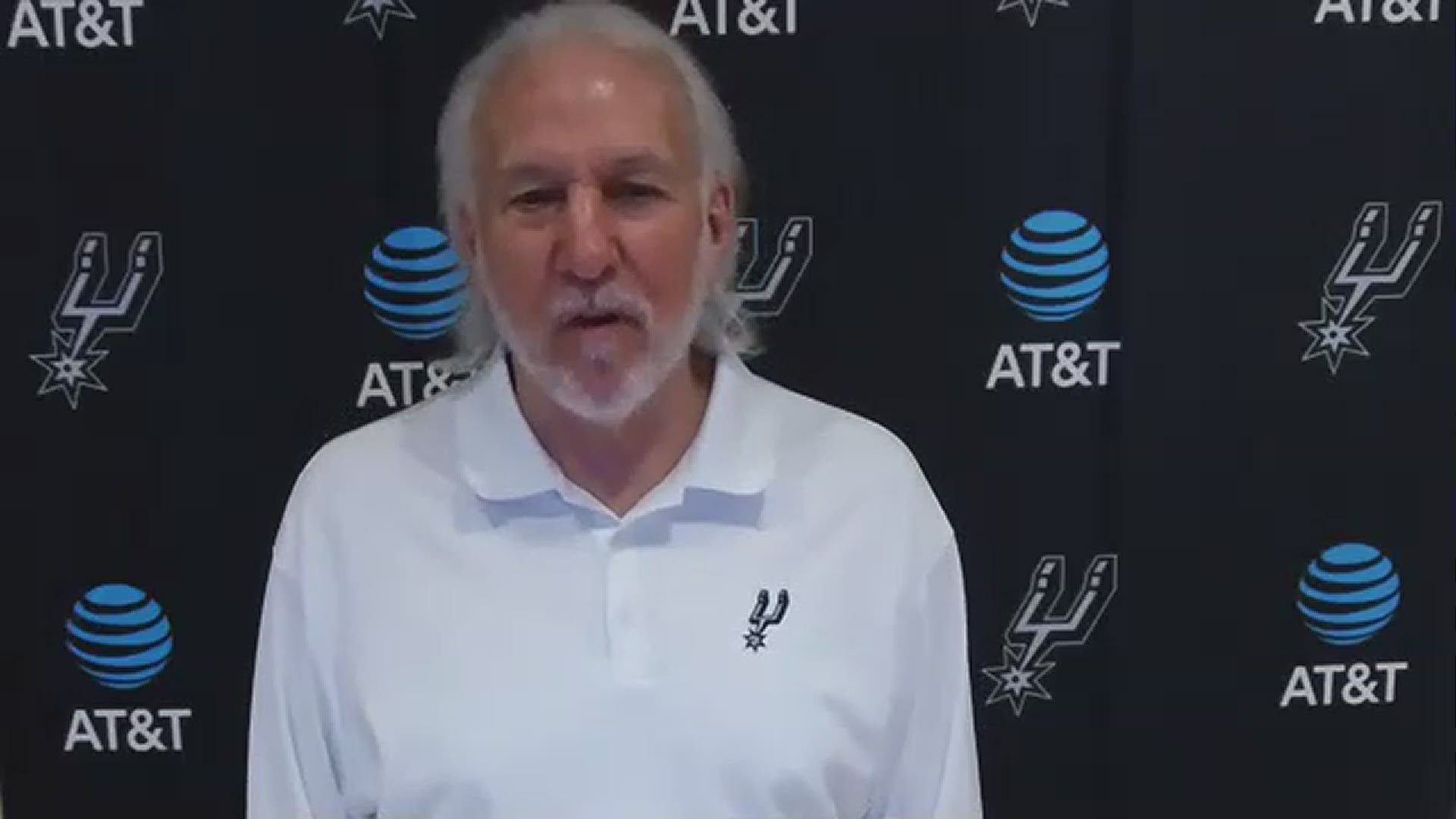 SAN ANTONIO — The Utah Jazz made quick work of the Spurs on Wednesday night, using a 17-0 run between the first and second quarters to open up a 20-point lead they never looked back from, winning 126-94 to sweep the season series.

The starters couldn't stop Utah, even without two All Stars, but they scored enough to keep things close. The bench unit got shredded as Jordan Clarkson put up a game-high 30 points. The pair of Patty Mills and Rudy Gay each played 7 minutes in that first half, scored 0 points, and got outscored by 14.

They didn't see the floor after that, as coach Gregg Popovich let guys like Luka Samanic, Devin Vassell, Tre Jones, and Drew Eubanks play heavy minutes in the blowout. Nobody shot well, but those four guys led the team with double-figure scoring.

After the game, Pop said he liked what he saw from those young guys in terms of their execution and competitiveness. He said that he rested the veterans because they had no chance of winning the game, and noted the schedule, travel, overtime games, and tough losses as reasons this team is having a hard time right now.

"It's just hard to get away from the fact that our cup is pretty empty after some tough travel, some tough losses and the schedule, I think I have to have a little bit of empathy for that, even though excuses are hard to make," he said while crediting Utah's performance. 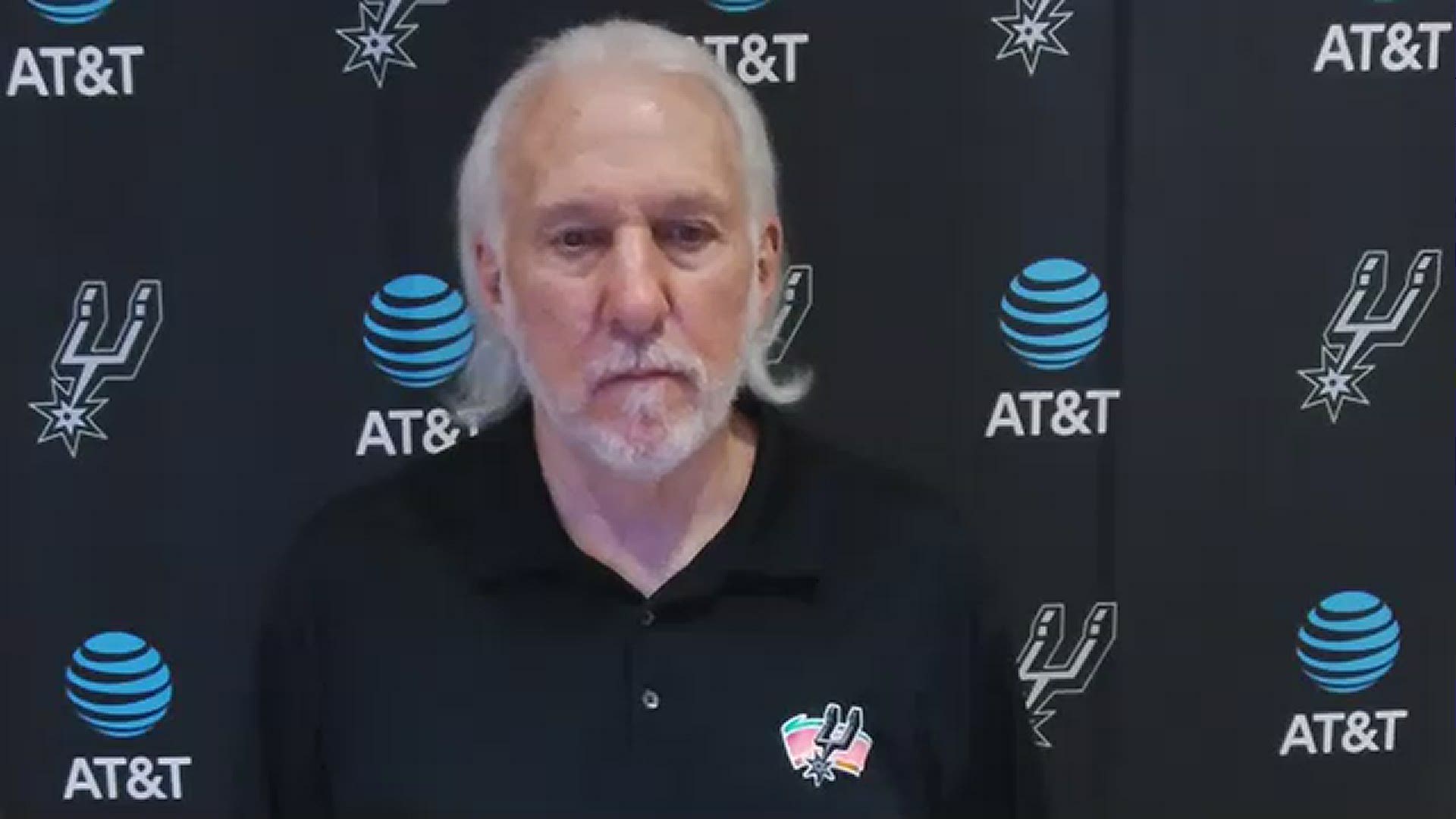 Devin Vassell said he's focused on bringing energy and defense to the starting unit, wanting to be a disruptor and play his game. He was excited for Jones and Samanic, who made the most of their opportunities tonight.

"I get to see them every day in practice, play against them in three on three," he said. "I think at the end of the day, the more opportunity they get, the more comfortable they'll get out there. They're both great players, they both work their asses off honestly, and I'm just excited to see them go out there and play, and play confidently." 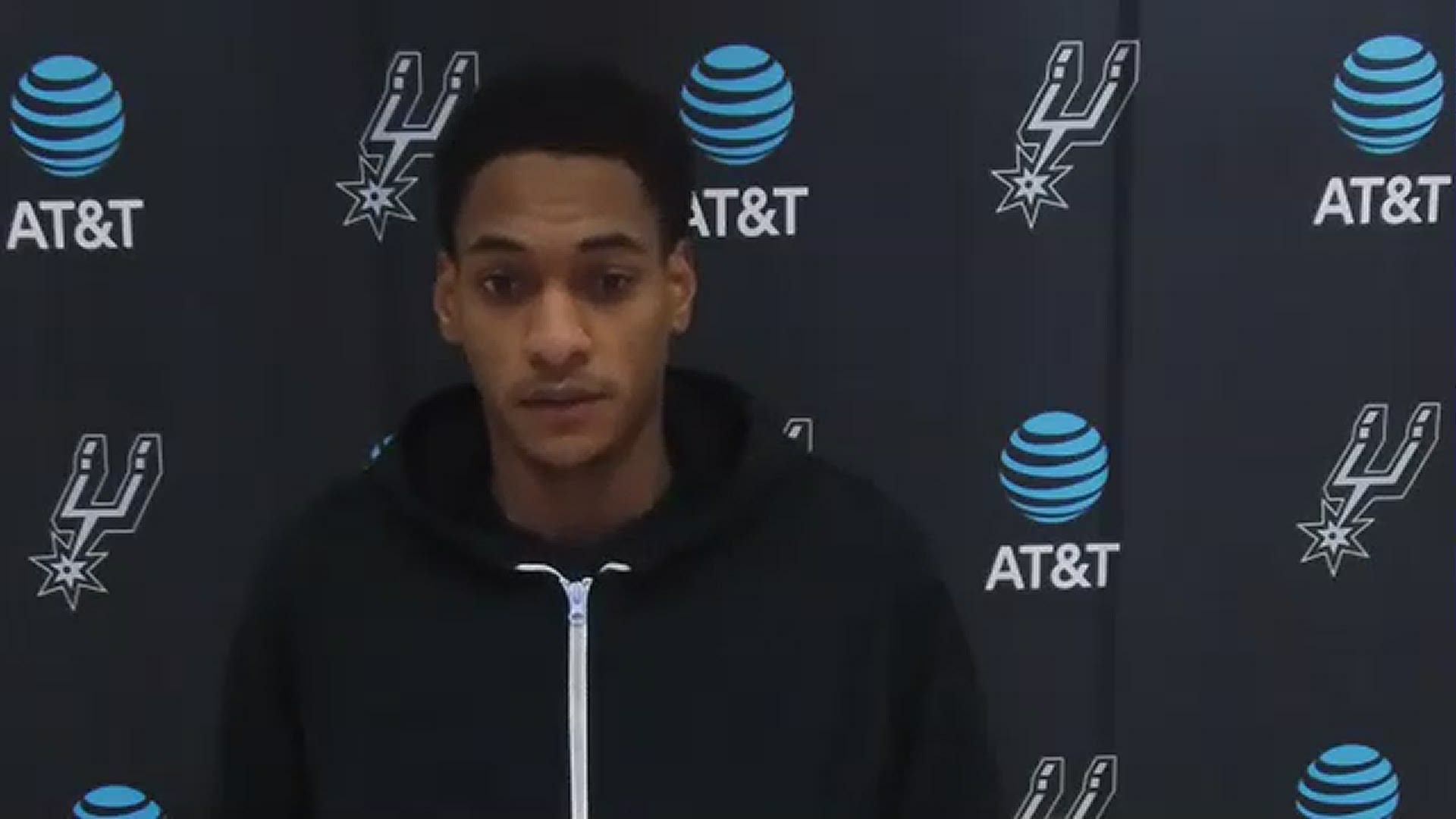 DeMar DeRozan spoke highly of his younger teammates, starting with Vassell's potential as a shooter, shot creator and defender.

"It's about experience for him, I tell him all the time, don't get down on yourself for making mistakes, because this is a crazy rookie year for him," noting the lack of Summer League, training camp and practice time. He extended that to the other young guns who played heavy minutes tonight. 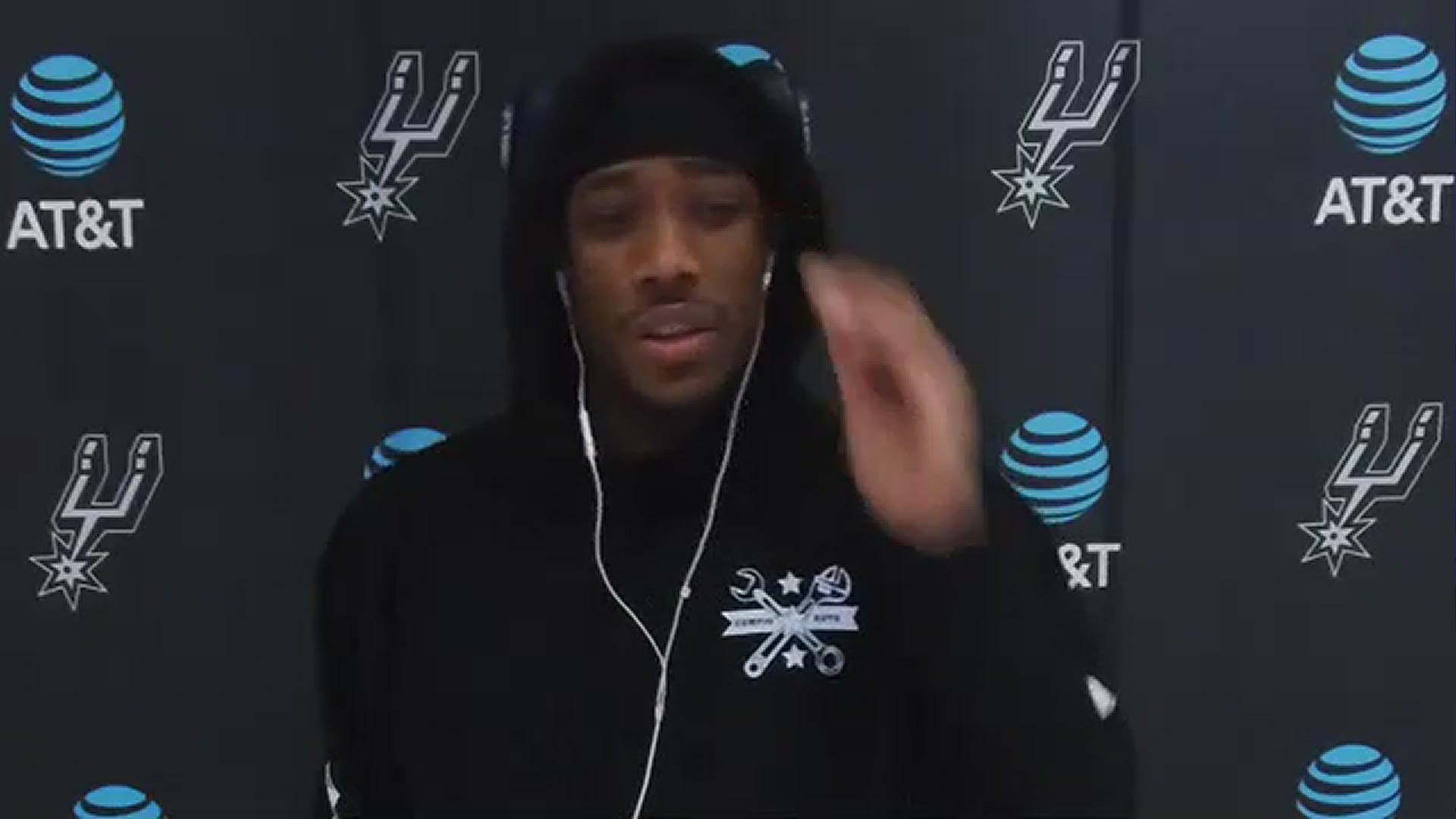 "Whenever they get an opportunity, they go out there and be aggressive, extremely aggressive, and it's fun to see. That could carry over in the long run, when you need those guys unexpectedly, they don't feel nervous," he said.

Devin Vassell opened the half with a sweet hesitation drive and score. Then he set a screen for DeMar, who split two defenders and floated it in over the top of a third, forcing a timeout from Utah at 66-46.

The Jazz answered out of it, pushing their lead to 34 with a 18-4 run. At that point, the game turned into a development showcase. The game was never close again after Utah's first-half 17-0 run, and Coach Popovich used the blowout to rest his rotation players and let the young guys play through mistakes.

Devin Vassell played the most minutes on the team and scored 14 points. Luka Samanic led San Antonio with 15.

KJ put it on the money 💸 pic.twitter.com/MbUmMZb3wm

Drew Eubanks added 14 and Tre Jones had an uncharacteristically loud 11 off the bench, playing 24 minutes.

Utah opened the second quarter on a dominant 19-5 run attacking mainly San Antonio's bench. They built the lead up to 26 in an embarrassing stretch of basketball for the Spurs.

With six minutes left in the half, Coach Pop decided to run with Tre Jones, Devin Vassell, Keldon Johnson, Luka Samanic, and Drew Eubanks, perhaps looking for a spark.

That unit finished the half, fighting hard defensively and stopping the bleeding a bit. The Spurs went into halftime down 66-42.

The Spurs opened the game looking more aggressive on the offensive end than they had been in the previous game, taking it at Rudy Gobert a bit more, drawing free throws, and generating decent layup opportunities.

The Spurs have needed more three-point shooting with Derrick White out, and Keldon Johnson did his part.

Keldon got the memo about shooting more threes pic.twitter.com/CWo7iMnsuh

Lonnie Walker IV ran pick and roll, crossed back the other way, and drove in for a jam.

Love what I’m seeing from Lonnie in pick and roll lately pic.twitter.com/9MAqDcNYVZ

Walker made a three and then dished to Gorgui Dieng for a dunk, but after that, the Jazz went off on San Antonio's bench. The Spurs were down just five when Utah ripped off a 17-0 run in about three minutes. San Antonio trailed 38-26 after one, and it got much worse from there.

BOTTOM LINE: San Antonio aims to stop its four-game skid with a victory against the Utah Jazz.

The Jazz are 23-12 in conference matchups. Utah is 3-1 in one-possession games.

The Spurs have gone 16-21 against Western Conference opponents. San Antonio averages 44 rebounds per game and is 13-4 when winning the rebounding battle.

The teams meet for the second game in a row.

DeMar DeRozan leads the Spurs averaging 7.3 assists while scoring 21.7 points per game. Keldon Johnson is averaging 13.8 points and 5.6 rebounds while shooting 50.6% over the last 10 games for San Antonio.

The Spurs were no match for the Jazz on Monday night, even as Utah rested two key players in Donovan Mitchell and Mike Conley.

San Antonio's defense got carved up, and on the other end they took half as many threes as their opponent and hit just five total for the game. Rudy Gobert had 24 points and 15 rebounds while locking down the paint.

The Jazz won the battle in the paint 66-46, and only gave the Spurs eight free throws in the whole game. Utah built their lead out to 25 points, and never let San Antonio in front.