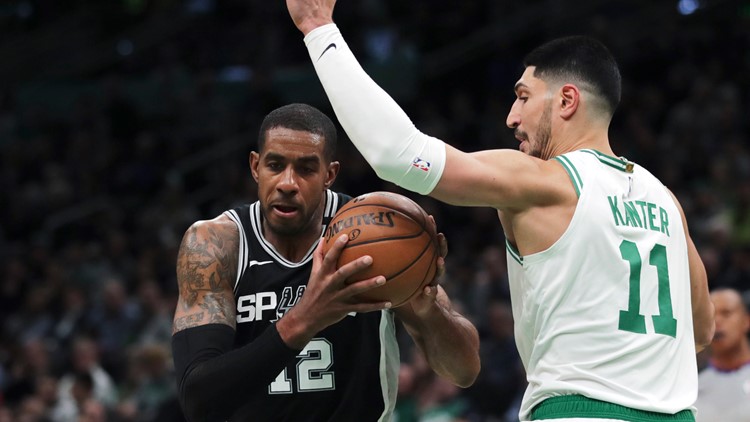 That's that! San Antonio follows up Monday night's defeat of the Milwaukee Bucks with what might be an even more impressive feat in defeating the Boston Celtics on the road, 129-114.

The Spurs never trailed in the matchup.

Led by DeMar DeRozan's game-high 30 points, the visiting team shot 55% from the floor and made 24 of its 26 attempts from the charity stripe en route to victory. Their only real test came in the middle of the third quarter, when the Celtics tried to mount a comeback after an 18-point halftime deficit. San Antonio, however, never let the home team get closer than seven points.

Now on just its fourth winning streak of the season, San Antonio will look to remain hot and win three straight for the first time since October when the team takes on Memphis Friday night.

Two minutes and 16 seconds remain in this game, with the Spurs up by 17 points. Lonnie Walker has been on fire down the homestretch, and now has 19 for the game.

With 4:43 remaining in the game, San Antonio remains in the driver's seat; their lead is up to 20 as time is running out for Boston to mount a comeback.

Nearly halfway through the fourth quarter, the Spurs still lead by double-digits as they look to put the stamp on a huge win. With 6:30 to go, they lead 114-95, and aren't letting up on their energy.

Three quarters of play done, and San Antonio is in good position to nab its second straight win over a title contender. Led by 28 points from DeMar DeRozan and a 57% shooting mark from the floor, the Spurs lead by 16 points heading into the homestretch.

After Boston got to within seven points of the Spurs, San Antonio reeled off a 17-5 run to up its lead back to 18 points with less than a minute remaining. DeMar DeRozan, meanwhile, is continuing to put on a show.

The Celtics have doubled up the Spurs on points this quarter, outscoring them 22-11 to cut an 18-point halftime lead down to seven with less than six minutes remaining in the quarter. Now is the time for San Antonio to re-assert its offense if it wants to turn its halftime lead into a win.

The third quarter has been more even-footed than the first two thus far. In the first 3:30, the Celtics have outscored the Spurs 11-7, cutting slightly into their lead. But San Antonio still leads 72-58, and Bryn Forbes is still hoisting up dimes.

After two quarters of play in Boston against the second-best team in the East, the Spurs have staked themselves out to an 18-point lead thanks to sensational offense and tough defense.

San Antonio shot 60% from the floor in the first half and outscored the Celtics in the paint, 34-14, while barely allowing the home team room to even sniff the lead. DeRozan's 15 points leads a balanced offensive attack that saw seven Spurs score at least six points in the first 24 minutes of play.

DeMar DeRozan was fouled on a two-point jump shot and made the most of it, giving his team another three points as part of what it, so far, a 13-point effort for the guard. The play came amid a stretch that saw him score five straight points for his squad.

Through five minutes in the second quarter, the Spurs have limited their opponent to just nine points as their own offense continues to show little area for exploitation; six Spurs have scored at least six points, with the team shooting a scorching 64% from the floor.

A 6-0 run to start the second, and the Spurs' lead is back up to 18 points as San Antonio is taking full advantage of the momentum they gained from their Monday night beatdown of the Bucks. The good guys lead, 40-22.

A first quarter that saw San Antonio up by as much as 19 at one point still ends with the advantage firmly in their grasp. After a dozen minutes, the Spurs lead 34-22, spurred by a balanced offensive effort from their starters and a stout defense that prevented all but two Celtics to tally more than three points in the first.

Meanwhile, pretty plays like this will go a long way.

Time to see if the Spurs can keep their foot on the gas.

With less than four minutes remaining in the opening period, the Spurs are putting early pressure on the Celtics as they increase their lead to 17. Among the early highlights: A bullseye from wayyyyy downtown off the hands of Bryn Forbes.

You could say San Antonio is starting off firing on all cylinders in Boston. Four-plus minutes into tonight's game, the Spurs have helped themselves to a 14-3 lead as they've sunk six of their first eight attempts from the floor while limiting the Celtics to a one-for-seven mark in that span.

Each Spurs starter has scored in the early going.

Fresh off handing the East-leading Milwaukee Bucks just their sixth loss of the season, the Spurs on Wednesday evening will continue a rough stretch of their schedule at Boston—against the East's second-leading squad.

The game against the Celtics starts a four-game road trip for the Silver and Black, their longest since November, but they have momentum on their side after Monday night's 22-point defeat of the Bucks.

The Spurs will also have revenge on their mind after losing to the Celtics, 135-115, on Nov. 9. But Boston has been on tear, winning eight of its last 10 games for a 25-9 overall record, including an 14-2 mark in home games. If the Spurs want to win their second straight game against a legitimate title contender, they'll need to overcome a subpar 4-11 road record to do it.

Tipoff is at 6 p.m. CT. Follow along here for live updates.