San Antonio secured a victory in their first meaningful bubble game, and showed a blueprint of how they can make a push for the playoffs. 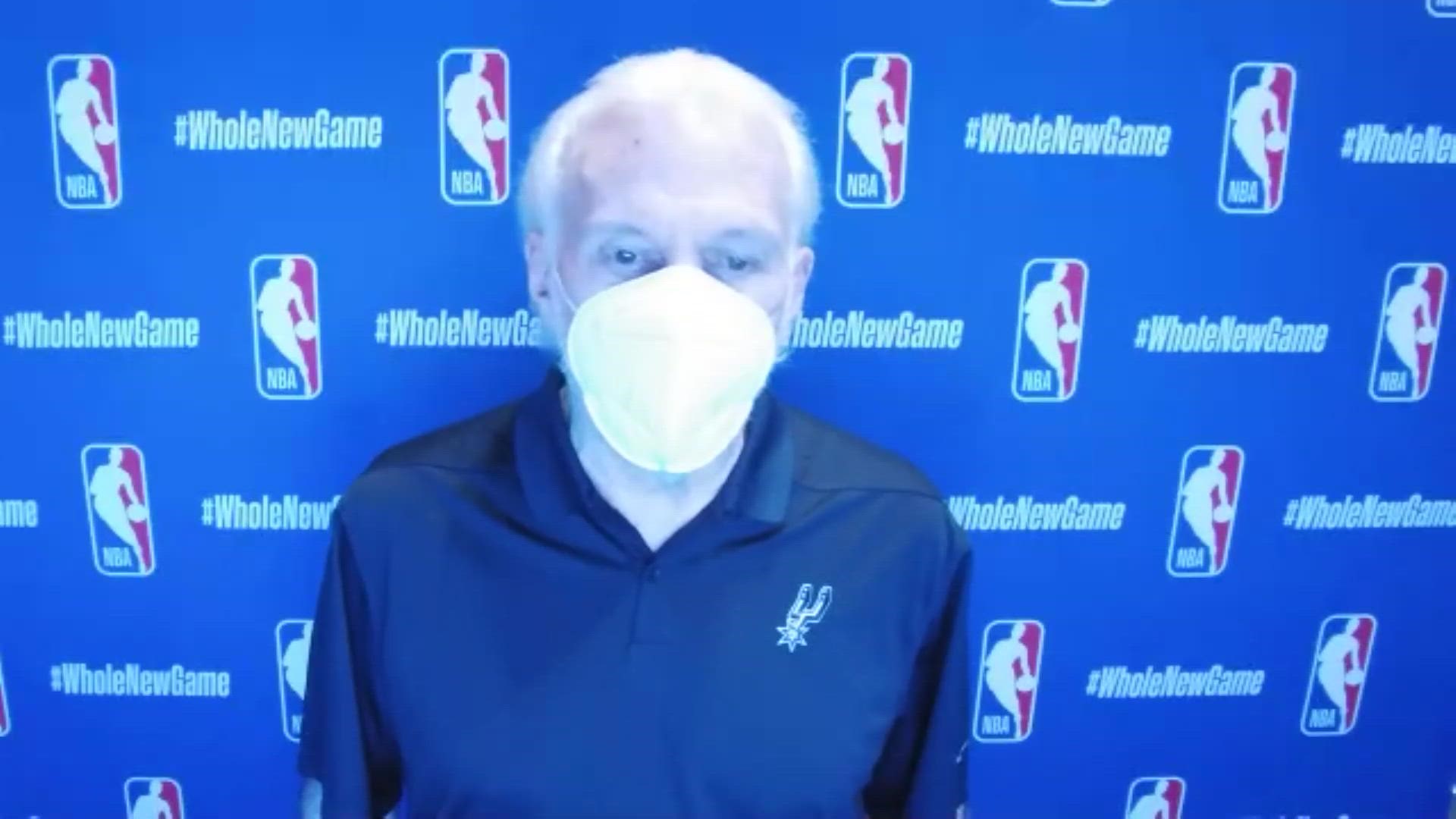 ORLANDO, Fla. — The Spurs' first meaningful game at Disney wasn't without hiccups, but they came out victorious and showed what their new-look squad can do.

San Antonio was locked in a battle with the Sacramento Kings for most of the night, but pulled away in the fourth quarter behind a late surge from DeMar DeRozan and stellar two-way play from Derrick White.

White finished the game with 26 points, shooting 4-9 from three. He also tallied 8 rebounds, 5 assists, and 5 charges. The last charge he took resulted in a chipped tooth that he hid behind his mask after the game. He said afterward that he was just playing his game and being aggressive.

"He's one of our top defenders, maybe even the top defender," Spurs Head Coach Gregg Popovich said about White after the game. "He contests threes, he takes charges, he's really developed into a fine player."

When asked what's the secret to taking a charge, White said simply, "Being in the right place, and being willing to take it."

He certainly seems to do that more than anybody else in the NBA.

Out of the gate, the Spurs and Kings played at a breakneck pace and both scored the ball efficiently. White and Dejounte Murray notched 13 of the Spurs' first 16 points. By halftime, the pair had combined for 26 points, 6 assists, and 5 rebounds, but Murray got into foul trouble guarding De'Aaron Fox.

Fox gave the Spurs fits all night, finishing the game with 39 points and 6 assists. After the game, White didn't mince words about what makes Fox such a tough cover.

"Fast as hell, probably the fastest guy in the league," White said. "Shifty, gets you leaning one way or another, and he's too quick and fast to get back in front of him."

When Murray picked up his fourth foul  trying to stay in front just 11 seconds into the second half, Pop threw in rookie Keldon Johnson, who performed admirably. Johnson hit 2-4 on long-range attempts and showed that trademarked effort that earned him the "Mustang" nickname from Coach Pop.

Lonnie Walker IV also put forth a strong showing, scoring 7 quick points to start the third quarter and finishing with 16 points and 4 dimes. He may not light up the box score every night, but he looks far more comfortable in his role, and much more sure of himself than he was in the beginning of the year.

The Spurs youth movement is in full swing, but the vets got in on the action too. Marco Belinelli and Rudy Gay combined for 20 points in the first half. Belinelli got to the line seven times in the first quarter, and he hit all seven. According to the Spurs, Belinelli left the game after spraining his ankle. Coach Popovich did not provide an update on his condition after the game.

As for Gay, he finished with a solid 19 points, hitting 3-5 from deep. Gay only shot about 31% from three in the first portion of the regular season, but his shot was falling more in the scrimmages.

You may be wondering how we've reached this part of the game recap without mentioning DeMar DeRozan. It's because for most of the game he took a backseat, setting up teammates and letting those young guys score. Entering the fourth quarter, he had 10 points and 10 assists.

In the fourth he asserted himself, dropping 17 points in the decisive period to propel San Antonio to victory. It's a strategy we've seen from him before, and it makes a lot of sense. He got the young guys involved early, let them get hot, and saved his energy for winning time.

"Me trying to get other guys involved, get them in a rhythm, I knew my rhythm would come," DeRozan said. "Especially in the fourth quarter."

"I could tell in that fourth quarter, he was ready to turn it on," White said. "We were saying, 'This is your time Deebo, that's what you do.' He's a star in this league for a reason, and he was huge for us down the stretch."

That may be the recipe for success for these bubble Spurs: Let the young guys run up and down the floor, push the pace, set the tone, and then watch as one of the game's great scorers goes to work against tired defenders with the game on the line.

Popovich and members of the team have talked about development as the main goal, and Pop even joked before the game that he wouldn't suggest betting on the Spurs to win the title.

Still, this team can win games while giving young guys meaningful playing time, as they did tonight. After the win, the Silver & Black jumped from 13th to 10th in the Western Conference standings, just half a game behind Portland and three games back of Memphis, who they'll play next.

Plenty have already written the Spurs off, and that's a bit premature. It won't be easy for them to make the playoffs, but it certainly seems attainable after the strong showing tonight.

"I don't see how you could scout us, we've got a lot of wild pit bulls out there running around, and any given night, those guys can explode and do something amazing," DeRozan said. "Confidence is definitely gonna be high going into the next game, for all of us."

"They should enjoy this tonight," Popovich said. "Enjoy it in the morning and then forget about it and get ready for the next one.”