KENS 5 is the official station of the San Antonio Spurs! 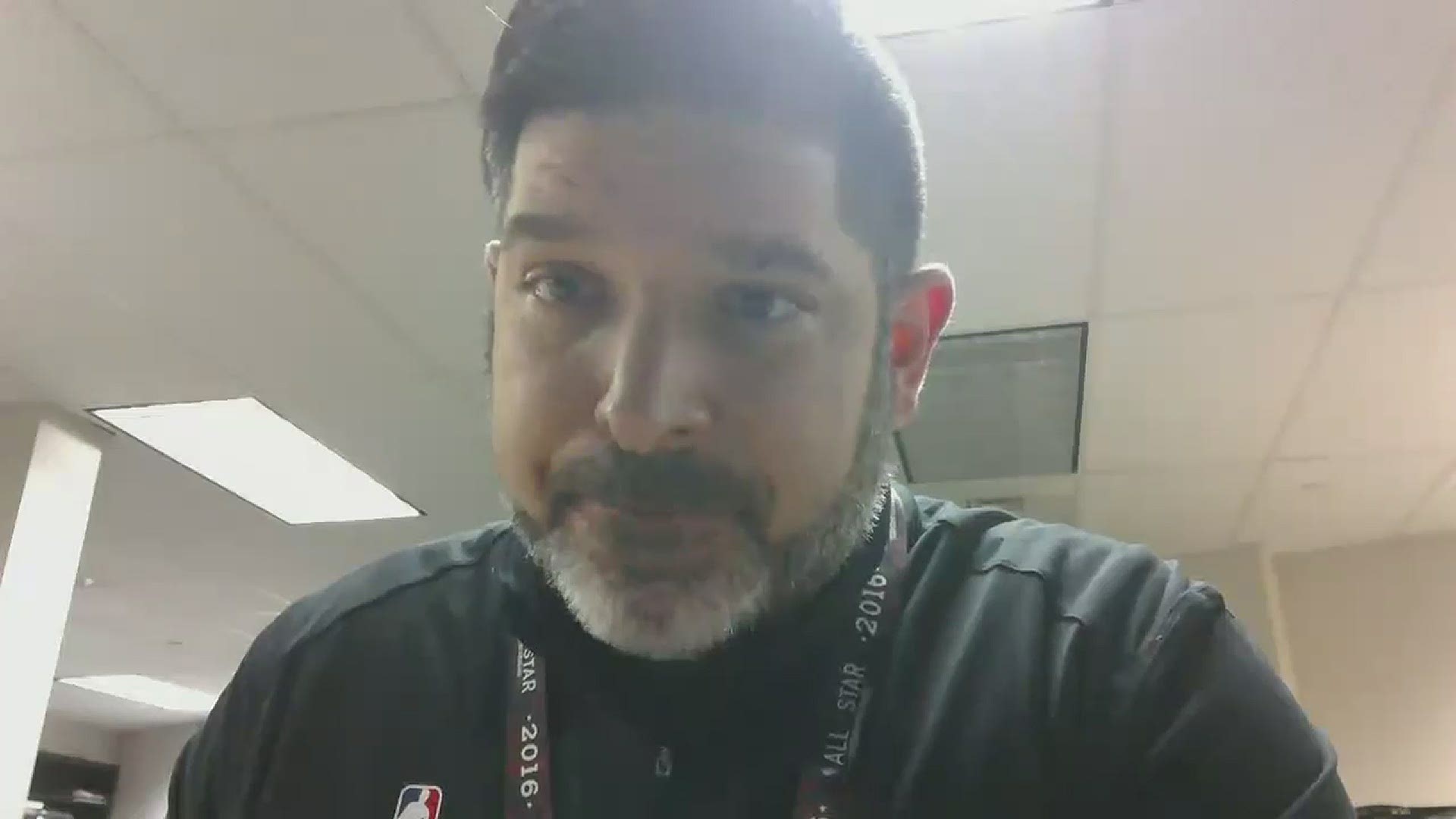 SAN ANTONIO — It didn't start pretty for the Spurs, but they found their rhythm on both ends and buried the depleted Washington Wizards with a 15-1 run late in the fourth quarter.

It was a total team effort, as seven players for San Antonio scored 11 or more points. Patty Mills, LaMarcus Aldridge, and rookie Devin Vassell all came alive in the third quarter, and Dejounte Murray notched the second triple-double of his season and career.

After the game, coach Gregg Popovich said that his team shared the ball well and played solid defense down the stretch. When asked about how Dejounte looked, Pop said that he put up a triple-double with one turnover, so, pretty good.

Murray said after the game that his ankle was bothering him a little bit, but he tried to have a 'Mamba Mentality' about it and asked what Kobe would do. 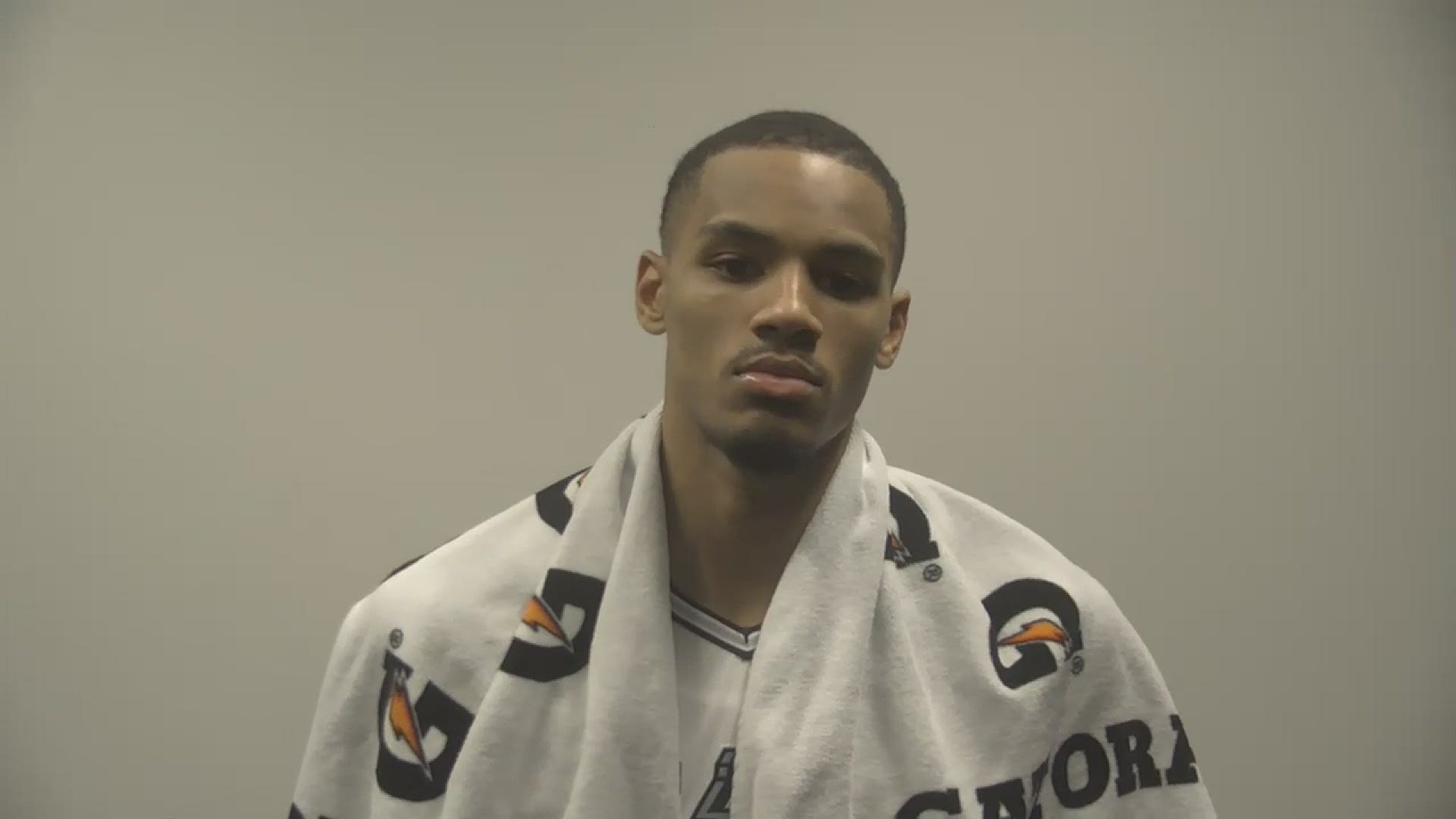 Murray pointed to Patty Mills and his 11-2 run at the end of the third quarter as the spark that lit a fire under the Spurs that would end up fully engulfing the Wizards.

In that stretch Mills hit a mid-range jumper, a three, and got all the way to the rim on the same high screen and roll with Jakob Poeltl. Mills, who finished with a team-high 21, spoke a bit about reading the defense in those situations. Once he was feeling himself he danced and pulled up from deep, hitting it and drawing a foul. The four-point play at the buzzer doubled San Antonio's lead heading to the fourth. 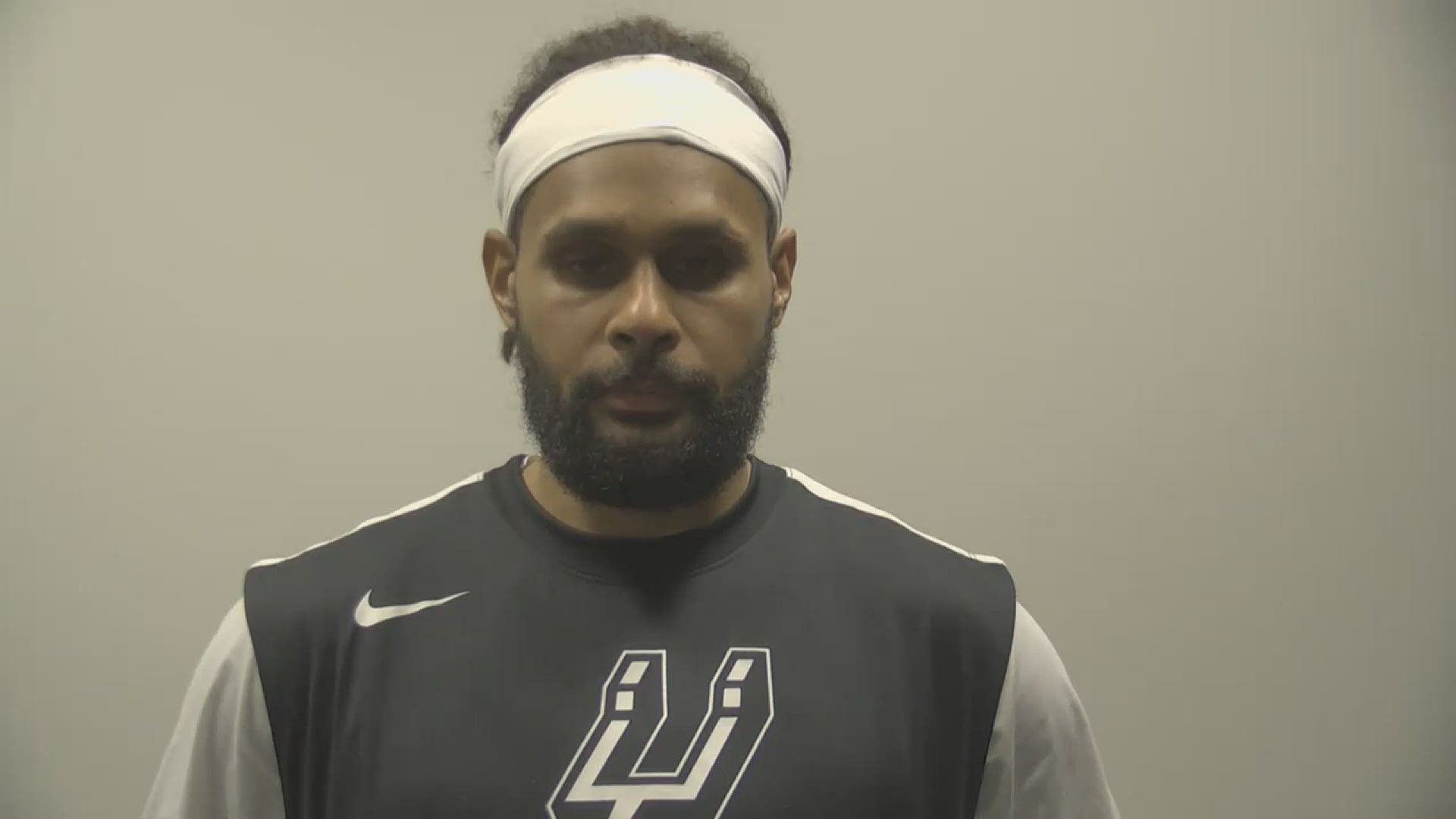 Lonnie Walker had posted four games in a row with single-digit scoring, but put up 16 and played very active defense in this win. 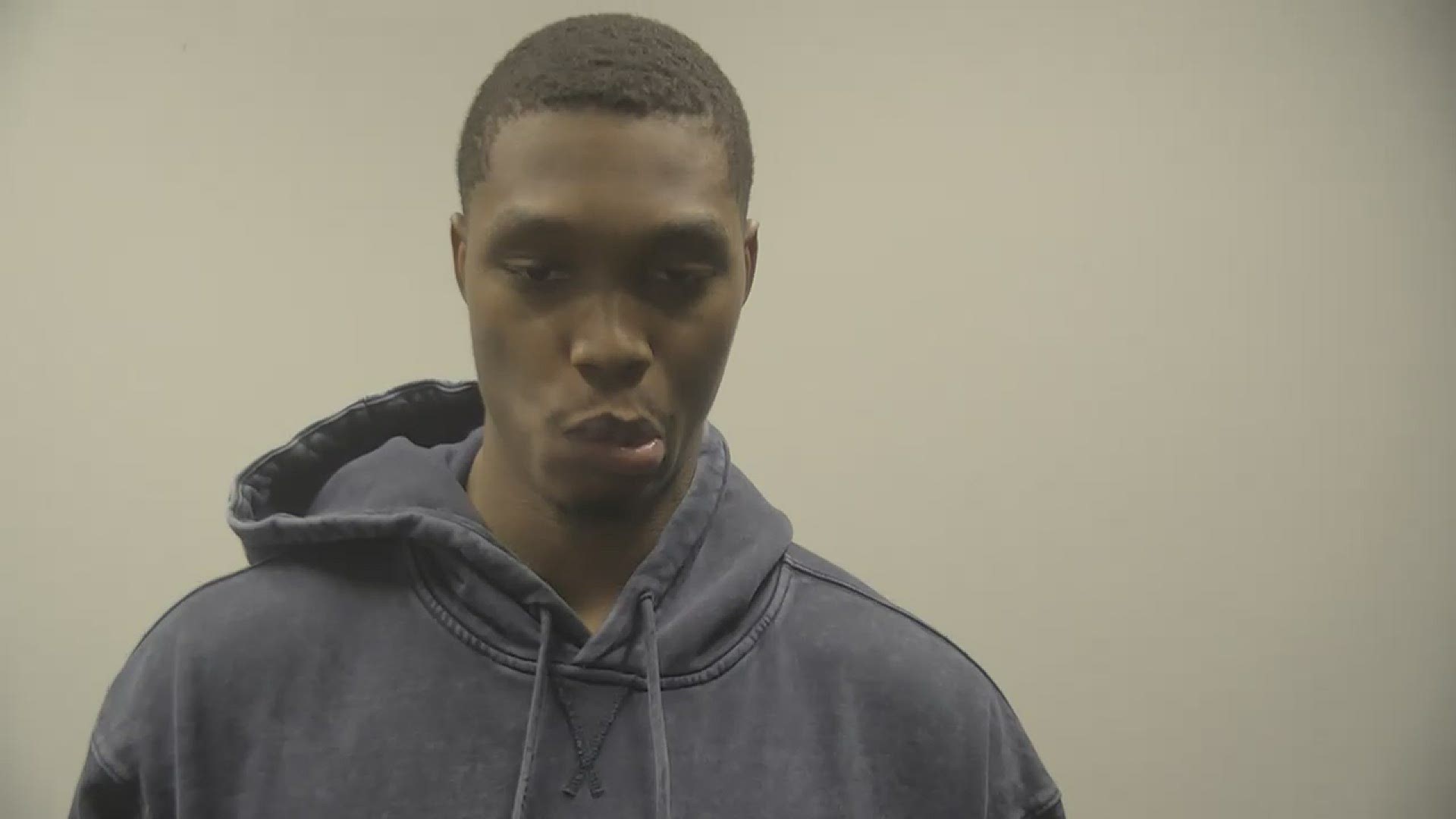 After the win, the Spurs hopped on a plane for New Orleans, where they'll play the Pelicans tomorrow.

Rudy Gay opened the fourth with a few free throws to give San Antonio their biggest lead of the game.

Russell Westbrook, who has never been a great shooter, knocked down a corner three. He missed his next one though, and Keldon found Rudy in transition for a reverse jam.

The Spurs had done a fantastic job of limiting turnovers, but looked sloppy as a pass rolled into the backcourt and was recovered by the Wiz. Johnson recovered extremely well, forcing a miss right at the basket and then powering the other way in transition for a layup through a foul.

Beal continued to score, but Murray knocked down a corner three with no hesitation.

Jakob Poeltl and Rudy Gay came in to join Dejounte, Lonnie and Keldon, and the defense tightened up. Poeltl stopped Beal at the rim and contested well when he got up a three, but he hit. Lonnie answered with a three of his own, pushing the lead back to eight.

Aldridge came in, knocked down the shot, blocked one and influenced another at the rim. Lonnie finished one break with an acrobatic finger roll, then missed a three. It was still in the cylinder when Rudy Gay tapped it in, but the officials missed it much to Washington's dismay.

After another stop, Patty pumped at the arc to shake his man, took one dribble and drained it. In transition again, Dejounte found Patty in the corner for a triple, and for the second triple double of his season and career. That made it a 15-1 run for San Antonio, putting the game out of reach late.

LaMarcus Aldridge quadrupled his point total for the game with his first three attempts in the second half. Pop seemed unhappy with the defense from Keldon, so he put Vassell in.

Vassell made an extra pass to Lonnie for three, then probed in transition to set up an eventual corner three from Aldridge.

Looks like LaMarcus was saving his buckets for the second half pic.twitter.com/2pyy5ILQBB

Aldridge's scoring heated up big time to start the third, but his defense remained an issue. Bradley Beal drilled an open 3 with Aldridge playing a drop coverage. That same strategy helped him block Russell Westbrook in close on the next possession, but also gave Jerome Robinson an open mid-range jumper that he hit to tie the game at 61.

Out of the timeout, Vassell knocked down another triple, but Beal beat him on another back cut for another layup to tie. Vassell answered that with another three off a pass from DeMar. Aldridge extended the lead with another jumper, making him 5-6 from the floor in the period for 11 points.

Vassell showed that his hand was red-hot too, making his third triple of the quarter.

Beal just kept scoring, getting up to 15 in the quarter, but San Antonio was too hot as a team. Keldon got to the cup once again, then Patty scored a pick and roll basket in each possible way: pulling up from mid-range, then from three, then got all the way to the basket.

Patty can get this shot any timepic.twitter.com/VdrIRmx5HR

With time expiring in the quarter, Patty went iso and hit a stepback three and-1.

Poeltl got his second block of the game meeting Russell Westbrook at the rim, and Gay tied the game at 26 with a three out of the triple threat. A turnover at the rim for Washington led to a fastbreak that ended with an open layup for Mills, who just missed it.

Dejounte Murray whipped a pass across the court to Devin Vassell for three to put San Antonio in the lead. Vassell then created his own turnaround in the paint for a bucket.

When Dejounte ripped down a rebound, he hurled a Tom Brady-esque deep ball to Mills, who finished the lay-in this time. Beal got a few buckets to tie the game at 35.

Johnson forced a drive and missed a tightly-contested look at the rim. The next time down Lonnie found him open at the arc, where he knocked down a high-arcing shot. DeRozan got to the rim to extend the lead a bit, but Beal beat everyone on a backdoor alley-oop and Pop took a timeout to speak to the guilty parties.

Beal again scored on a backdoor cut. The Spurs answered with DeMar driving and kicking it to the corner. The ball swung all the way around the horn, and Keldon attacked off the last catch for a bucket.

Walker grabbed a board and took it coast to coast for a layup.

Then he snagged a steal, but couldn't finish in transition again. He got to the line on the next possession and hit both.

DeMar DeRozan attacked the rim in pick and roll, but missed the shot badly. San Antonio's defense was scrambled, leaving Aldridge guarding Beal in space. That resulted in a drive and kick for an open corner three that went in over a halfhearted contest by Aldridge.

After Russell Westbrook bullied his way to the rim for a bucket, Aldridge and Keldon Johnson both failed to close out to the same corner for another open three.

Dejounte Murray used an Aldridge screen to create some space for a jumper he hit. He set up Aldridge with open pick and pop jumpers as well, but they didn't fall.

Good to see Dejounte back in the swing of things pic.twitter.com/IOHBov5iib

DeMar got to the line for free throws, and after stopping a possession that featured second and third chances for Washington, Johnson drove in transition for an and 1 to make it 8-7.

Washington responded with a 7-2 run with Robin Lopez in the middle of things as a roll man. He hit two shots in close, and found a shooter in that same right corner for another three. In fact, the Wizards made more threes from that spot than the Spurs had attempted from deep at all to that point. The only make for San Antonio was an Aldridge jumper.

Lonnie Walker IV hit a pull-up from mid-range, making him the fifth starter to score. The scoring was not as abundant as scoring chances were though, as they shot just 4-16 from the floor as Washington built an early 21-11 lead. Rudy Gay came off the bench and hit from mid-range to cut it back to single digits.

After the timeout, DeRozan was the only starter in with the bench unit. He drove and found Jakob Poeltl under the basket. He went up strong and got rejected by the bottom of the net, then corrected course and put it in from the top.

DeRozan attacked for a layup, then dished to Rudy Gay for a made jumper. With the shot clock ticking down he found Poeltl at the top of the key, where he drained a rare jumper, his longest in a Spurs uniform according to the broadcast crew. He also did a great job of protecting the rim.

Patty Mills got to the rim for a slick reverse, and then Gay missed a bunny and Mills whiffed the putback.

San Antonio is looking for a bounce-back win against a shorthanded Washington Wizards team that hasn't played in about two weeks due to coronavirus issues.

Before the game, coach Gregg Popovich and Lonnie Walker IV tried to put themselves in the shoes of their opponents, acknowledging the challenges posed by rust and conditioning but wary that these players will be well-rested and excited to get back out there. 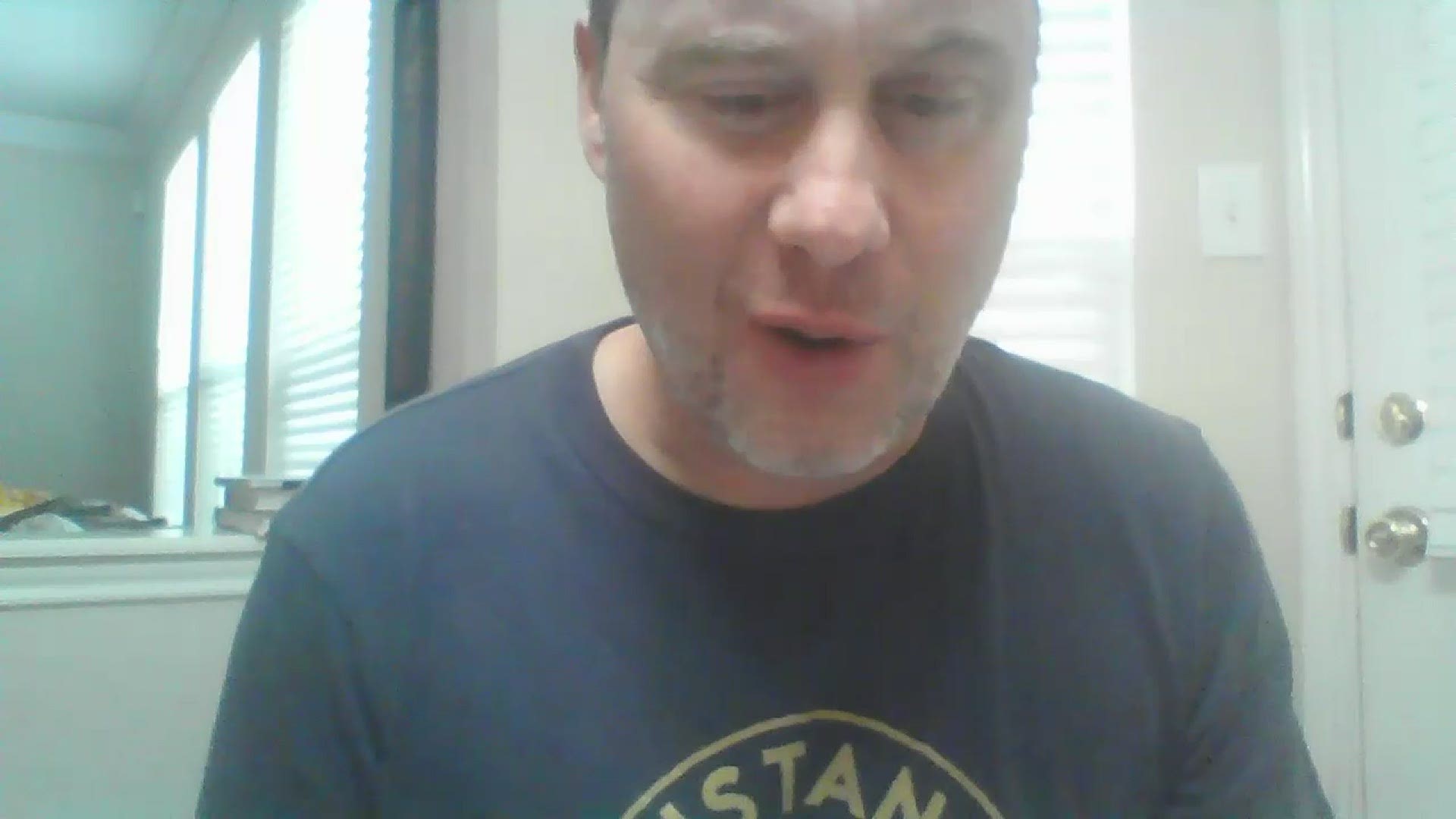 Coach Pop said that Dejounte Murray will start after spraining his ankle early in the loss to the Mavericks, leaving the game. He said that his young point guard has really matured this year. 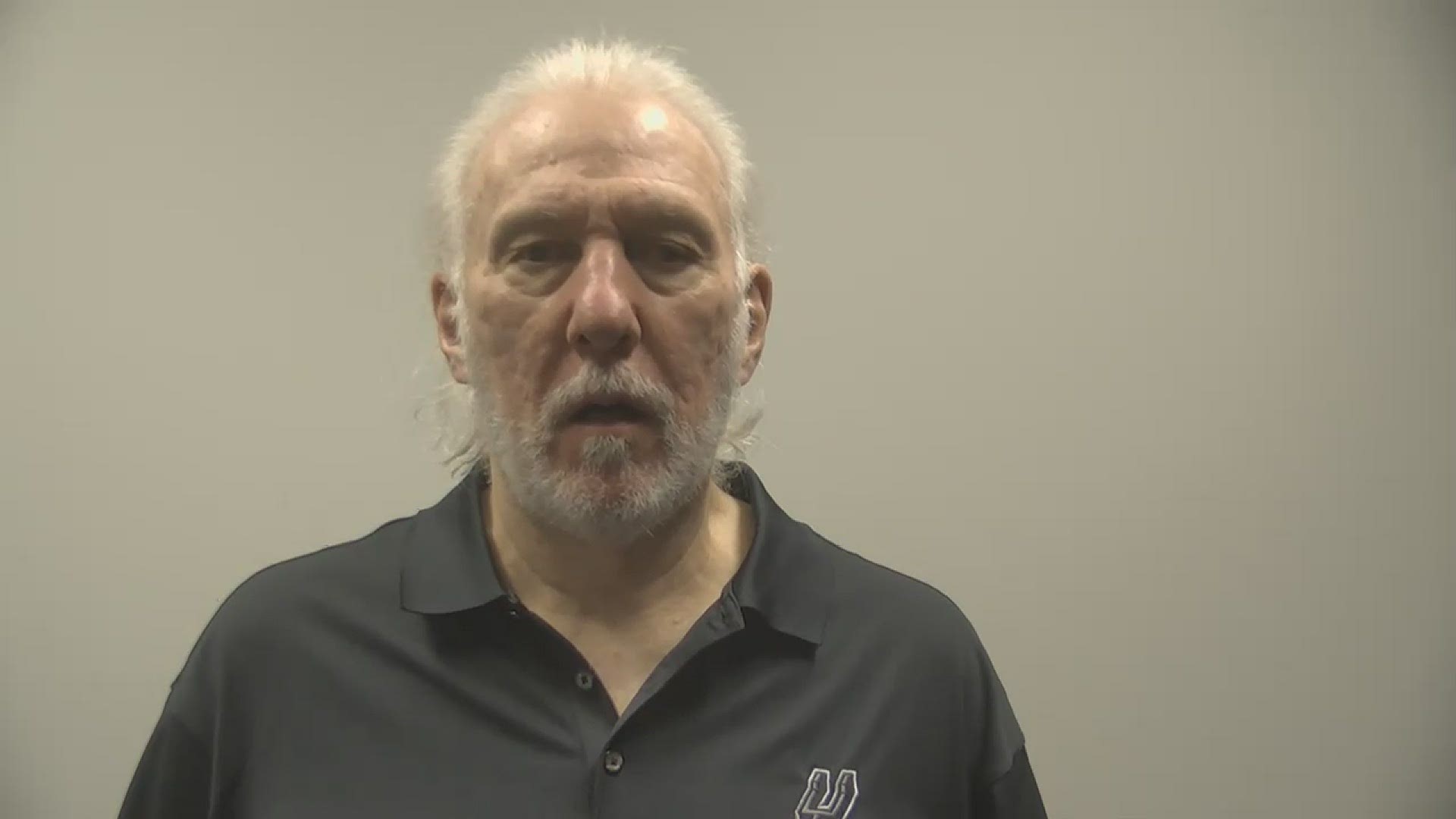 San Antonio lost one of their best players on one of the first plays of their game against the Dallas Mavericks. They went down by 18 with Dejounte Murray in the locker room, but rallied and competed to the end.

After the game, coach Gregg Popovich said that he expects Dejounte to be fine after turning his ankle. He thought the team did a great job of digging out of an early hole and fighting until the final buzzer.

"I told them I was very proud of what they did tonight," Popovich said. "We dug a hole for ourselves like we often have starting games, but as the game went along we got more and more aggressive, more and more physical, communicated better, and they didn't give in after going down 18. I was real proud of them, they did a good job. Down the stretch we missed a couple shots, they made a couple shots, gametime."