FINAL: Spurs fall to Kings 132-115 after Sacramento shoots the lights out 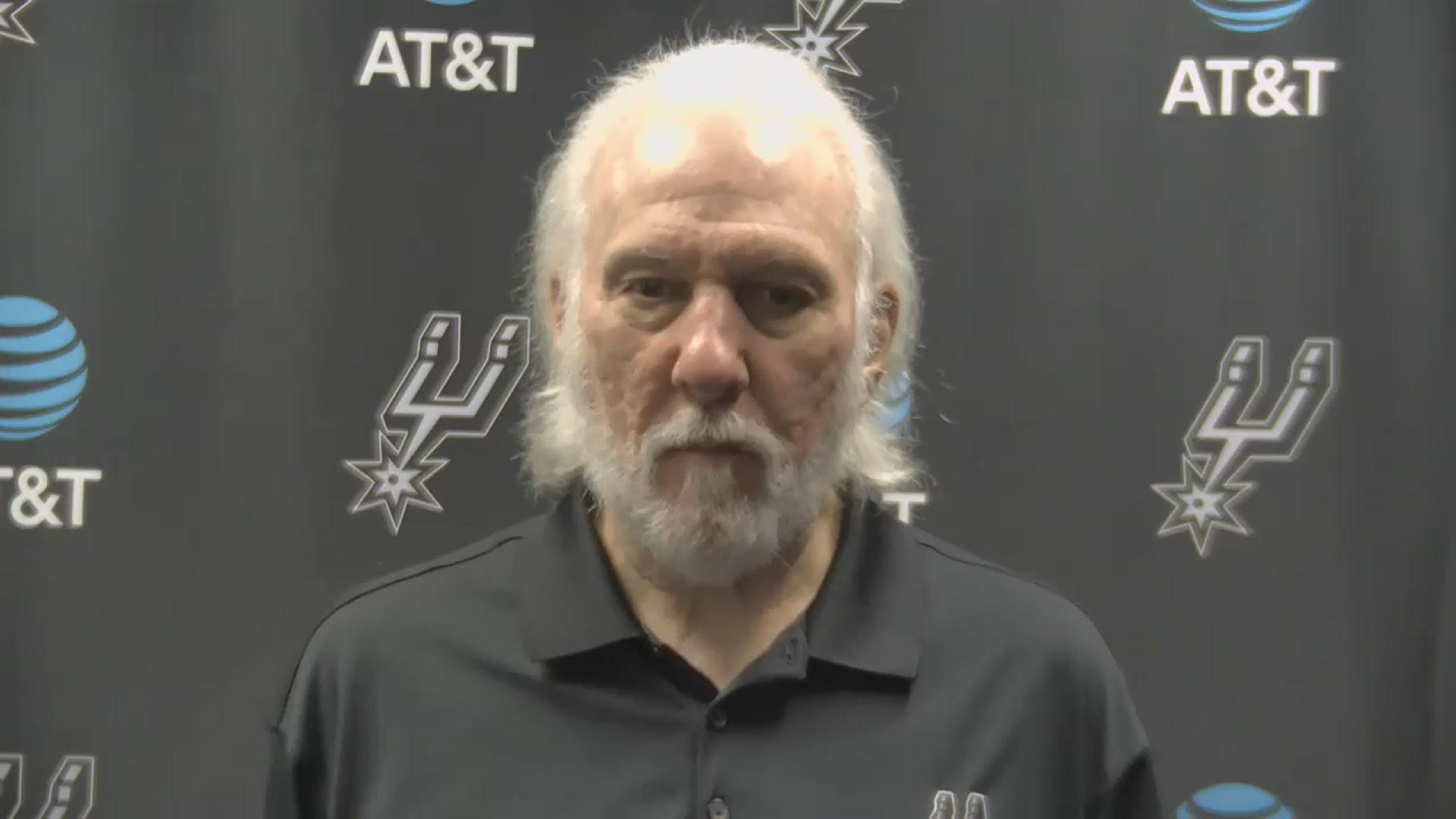 SAN ANTONIO — Sacramento came out of the gate shooting the lights out at the AT&T Center, and the Spurs couldn't slow them down as the Kings won their fifth in a row, 132-115.

San Antonio allowed 18-36 shooting from deep and went down by as many as 19 in the third quarter. They cut the deficit to three in the fourth, but the game ran away from them at that point.

Terence Davis opened the final period with an old-fashioned three-point play, but Rudy Gay answered by knocking one down from outside with a defender on him.

Davis hit a three, then Gay floated a lob that looked way too high, but Drew Eubanks timed it perfectly and slammed it home. Patty Mills knocked down a three, Derrick White dished to Eubanks for a rolling layup, and Gay forced another jump ball.

San Antonio had multiple opportunities to tie it but missed, and the Kings hit three number 17 of the game to push their lead back to six. The Spurs turned it over a few times after a pretty clean game and gave up a 7-0 run, going back down 10 before Murray drove for his first bucket of the second half.

A bad behind the back pass went out to Haliburton, who made it 18 team threes and a 13-point lead with just over five minutes to play. Mills hit a three off a dribble handoff. Fox crammed a dunk, and Mills missed a triple that felt more desperate.

White drove in for a layup to cut it to 12 with 3:28 to play, and Luke Walton called timeout. De'Aaron Fox was able to push their lead back to 16 with his ninth bucket of the game, giving him 24 points.

Samanic drove in on a smaller defender for a spinning layup, but the game was well out of reach.

Sacramento's three-point barrage only continued in the second half, as they built their lead as large as 16.

Keldon Johnson scored 7 points in a row for San Antonio in a determined effort, but the defense struggled mightily. They finally did get a stop inside, only to give up the board to Buddy Hield, who ran to the corner and drilled a triple like his team was down two with a second left. It put the Kings up 91-73.

Derrick White answered with a three and Sacramento took a timeout, but the Spurs needed it more.

DeRozan drove in for a strong and-1, and the Spurs finally completed a few stops.

You can’t stop DeMar, you can only hope to contain him pic.twitter.com/w2i5wRIaO6

DeMar hit a jumper from the free throw line before drawing two more free throws, then driving again for two more. Rudy Gay earned a jump ball with aggressive defense, and won the jump ball. He later knocked down a three.

Rudy caps a 13-0 run to get the Spurs right back in it pic.twitter.com/pWgsMFUfR9

Sacramento built their lead out to 40-35, but Dejounte Murray cut into it. He skied in for a board and threw a dime of an outlet pass to Drew Eubanks for an easy dunk.

Dejounte WHIPS an outlet for an easy dunk, this was fun pic.twitter.com/vD9YKu2AL8

Murray knocked down two tough mid-range looks, then Derrick White stepped into a three to tie it at 44.

Dejounte has this floater down pic.twitter.com/8DVzHyvk41

The Kings built their largest lead of the game at 58-50 with their 10th triple, but after another offensive board by Jakob Poeltl White lined up a corner three to answer.

Don’t give Derrick time to line up the laces pic.twitter.com/XPHcLiBNYn

Patty Mills hit another deep one, then DeMar got into the paint for a jumper. Derrick ripped a steal, then finished in transition to tie, then drew a charge on De'Aaron Fox, his third of the game.

Sacramento challenged though, and the call was overturned as the basket counted and he hit the free throw. Buddy Hield hit a three with Patty in his face, Fox drove in on a switch against Mills, and the Kings matched their largest lead at 68-60 at the break.

Spurs trail Kings 68-60 after first half

They won second-chance points 18-1 thanks to 6 offensive boards by Poeltl.

San Antonio struggled to defend the three-point line early, but tightened up on that end as Jakob Poeltl and Dejounte Murray dominated the scoring.

Each had 11 points in the first few minutes on 5-6. Murray hit a three, got to the rim, and hit jumpers while Poeltl had four offensive boards, a number of putbacks, and three or four blocks in the opening stanza.

Jakob Poeltl got credit for 3 blocks in the first quarter and he should’ve had 4 pic.twitter.com/2cRblbtyYX

The Spurs jumped out to a 26-20 lead, but the Kings answered with a 7-0 run to take a lead. Dejounte ended that with an offensive board that he put back up, and it was counted on a goaltend by former Spur Chimezie Metu.

Rookie Devin Vassell grabbed a tough board, then drilled a corner three to give San Antonio a 31-27 lead.

The Spurs have just acquired veteran big man Gorgui Dieng, but he won't play tonight. Lonnie Walker IV remains out with a wrist issue, but Devin Vassell is listed as active after tweaking his ankle.

RELATED: Did the Spurs get better at the trade deadline with Gorgui Dieng over LaMarcus Aldridge?

After dominating the first half and surviving an impressive late run by Chicago, the Spurs won 120-104 and handed Gregg Popovich win number 1,300 as a head coach.

San Antonio had seven guys score in double figures behind Jakob Poeltl, who tied his career high with 20 points. They moved to 23-20 on the season, and after the game Coach Pop praised the ball movement, shot making, and defensive intensity in the win.

DeMar DeRozan, Derrick White and Dejounte Murray combined for 22 assists and just 4 turnovers as a trio, and Poeltl was a huge beneficiary who finished 8-9 from the floor. White and Murray both spoke after the game about the target that Poeltl has become.

Murray spoke about the toughness of White, who chipped a tooth again in the previous game as he seems to always be putting his body in harm's way. He joked that he needs a punch card for his dentist because he goes so much.