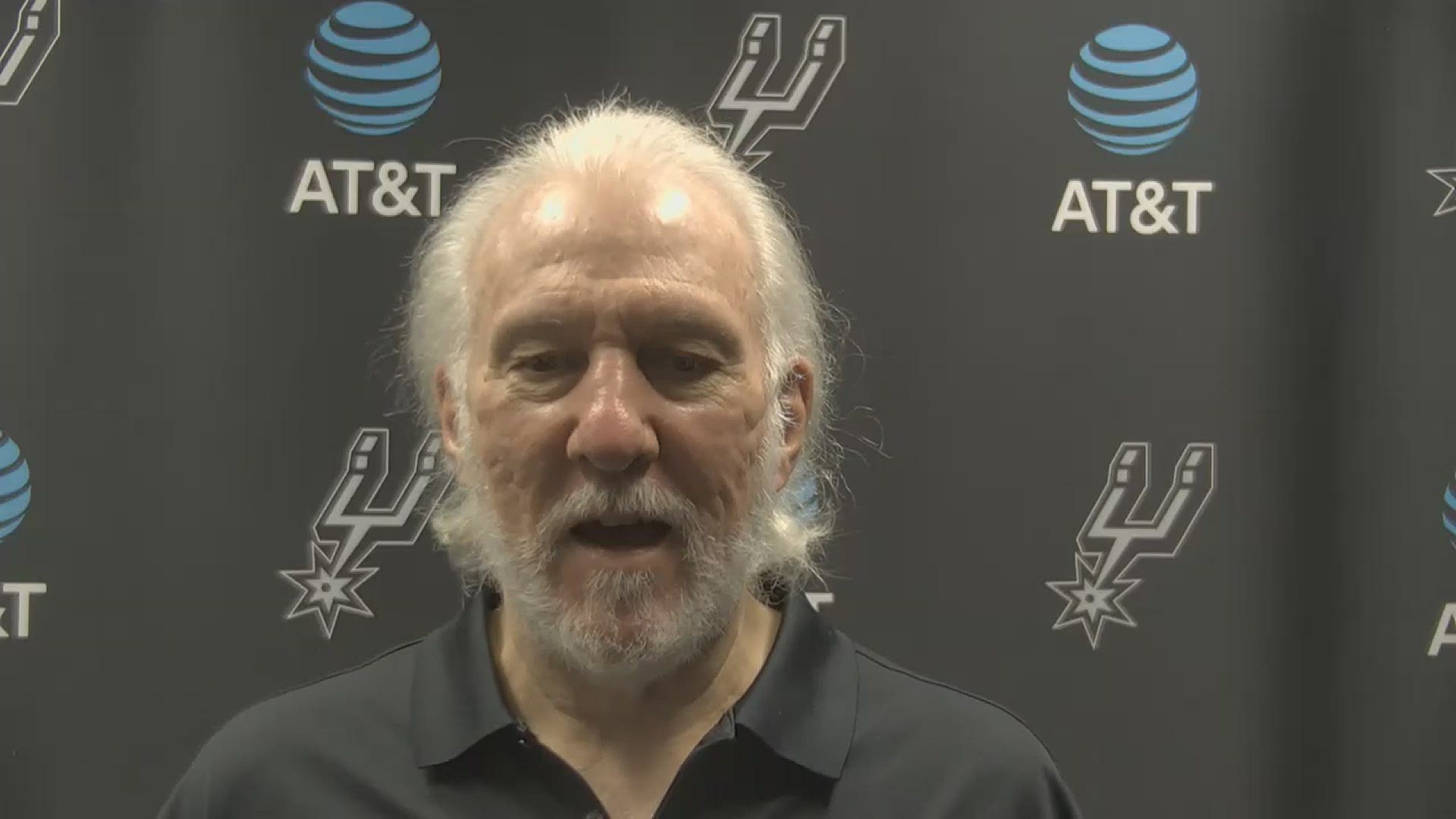 SAN ANTONIO — The Spurs passed another tough test at the AT&T Center Friday night, toppling a Denver Nuggets squad that had won five in a row and passing them for fourth in the Western Conference.

San Antonio notched their third win in a row behind an absurdly efficient 30 points and 10 assists from DeMar DeRozan, 26 points and 7 boards from a poised Dejounte Murray, 19 and nine from the hyper-aggressive Keldon Johnson, and 17 off the bench by Patty Mills.

DeRozan did all that on 11-14 shooting with just a single turnover. He said his efficiency was about playing the chess game and taking what the defense gave him. 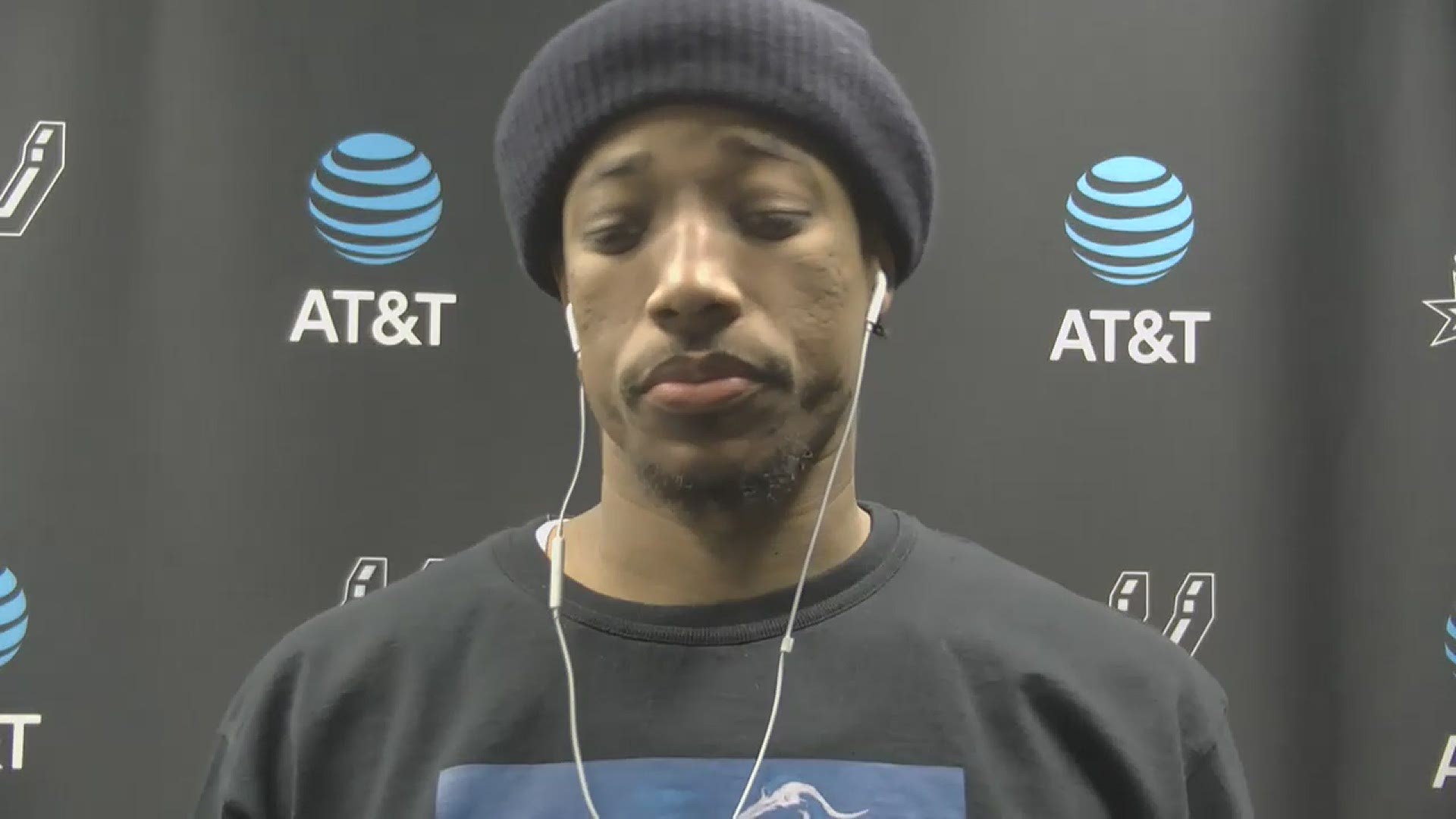 After the game Coach Popovich spoke about what he liked tonight, which doubles as a list of reasons that they're 11-8 on the year. He said the up-tempo pace was beneficial, and so was the good-to-great ball movement. He saw better recognition in team defense, and more pride in individual defense.

They held Denver to 25 in the second quarter and 23 in the fourth, a pattern that has emerged for San Antonio through the first quarter of the season.

"We've got some young kids setting the tone defensively, they're more athletic in that regard, and I think that as a whole the group understands: no defense, no wins," Popovich said. 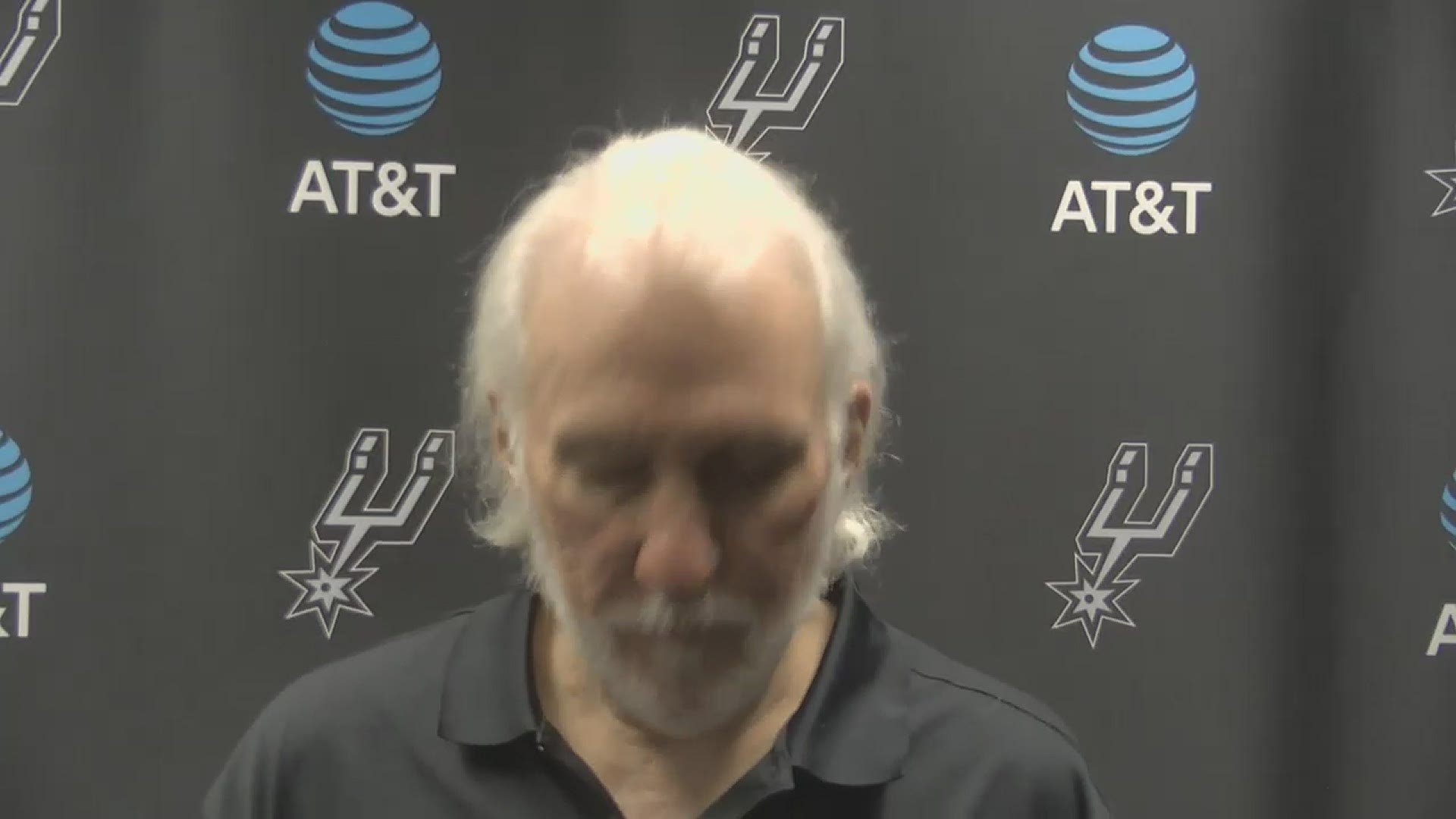 Words to live by, and everybody has bought in. Patty probably isn't who Pop is thinking of when he talks about those young athletic tone setters, but he led the team with 3 steals in the game. He said this contest was a highlight for this group sticking with their defensive game plan and helping aggressively when needed. 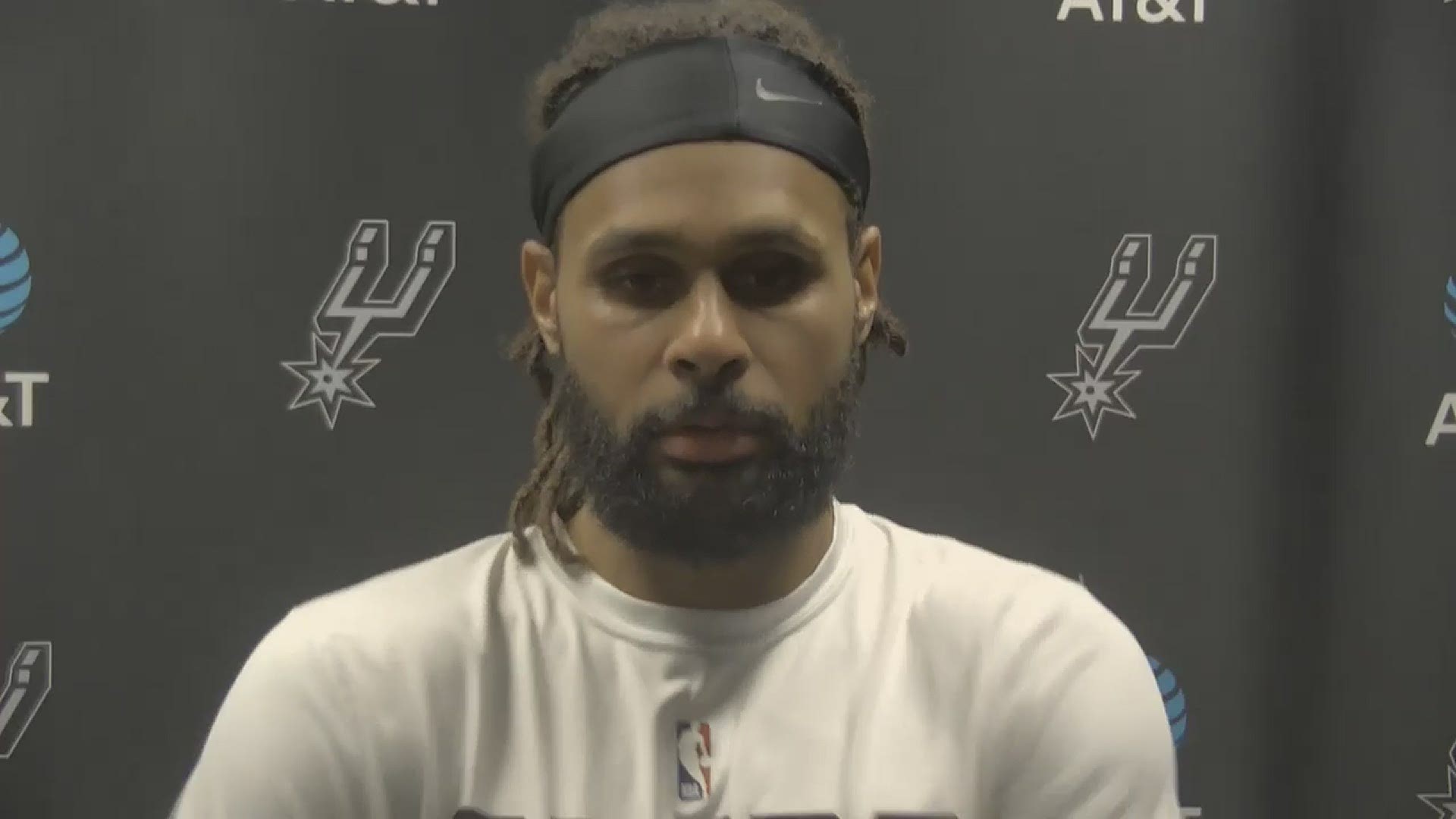 San Antonio plays again Saturday night, and we'll see how Dejounte follows up his strong performance against the enormously talented Ja Morant. Murray should have help in the form of Derrick White, with the ascendant two-way guard set to return from a broken toe and play his second game of the year. 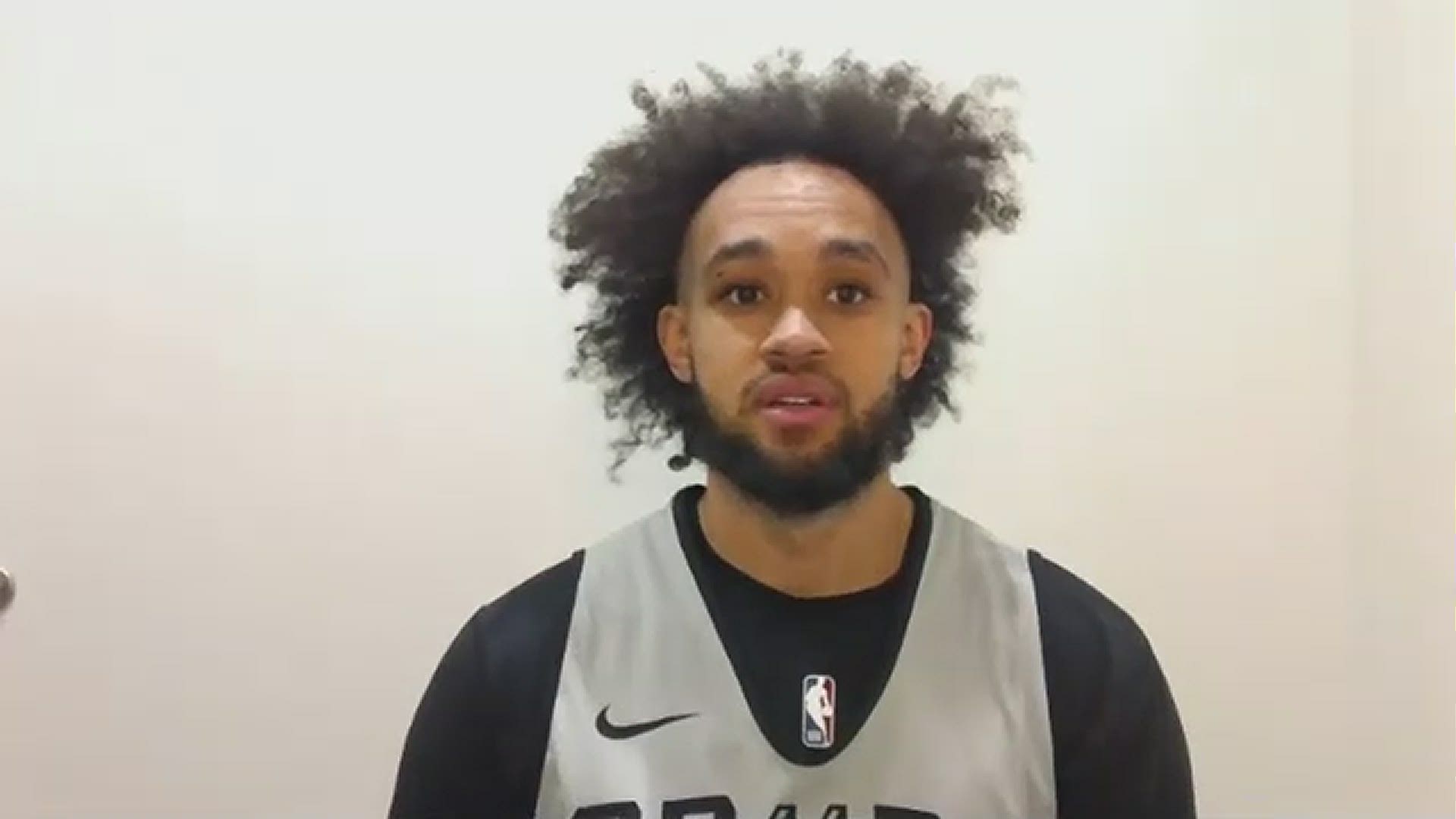 The Spurs opened the fourth with a set to get a three for Patty Mills, and he drained it. Denver answered though. Rudy Gay found Jakob Poeltl inside and he probably could have dunked it, but he went up soft and it cost him two points.

After some sloppy play both ways, Poeltl cleaned up the offensive glass. A miscommunication in transition allowed Denver to tie the game at 92.

San Antonio strung together a series of passes in a play that involved everyone and had to be one of their best quick-decision sequences of the year. It ended with Patty in the corner, drawing a foul on an attempt from three. he hit all three free throws, but Jokic answered with a three to tie.

Dejounte tried a three and it rattled out, but Poeltl got the board and Keldon Johnson drove to the basket screaming like a madman, putting back his own miss.

Patty drove for free throws, and on the other end the Spurs doubled Jokic hard. Johnson picked off the pass he lofted out of it, and Dejounte finished in transition with power and style.

Murray hit a technical free throw, then made a baseline jumper. He almost turned it over, but saved it to DeRozan who gave it back to him in the corner for three.

Dejounte saves a sloppy dribble, gets to the corner, drains it

Keldon fought for another bully-ball layup from the dunker spot. Poeltl got a steal, and Dejounte finished a layup on a pass from Lonnie to give the Spurs their biggest lead yet at 111-100.

Getting things done on both ends! #GoSpursGo pic.twitter.com/NPzzRHRLlM

Jokic drained another open three, and on the other end they fouled Poeltl to send him to the line where he looks like a fish out of water. He missed both, but Keldon got the board with more pure aggression.

After a series of misses, Dejounte poked loose a steal and put back his miss in transition, pushing the lead back to 10 with 3:08 to play.

DeRozan drove again, and this time he found a cutting Johnson for his tenth assist. You already know how Keldon finished.

After another stop, Johnson got the ball late in the clock and hit a mid-range stepback with a little extra sauce to let you know he was feeling himself with 19 points.

San Antonio opened the quarter with an Iverson cut to get DeRozan going downhill, and he finished in close.

LaMarcus Aldridge popped to the arc, pumped, got Jokic off his feet, drove, and kicked to DeRozan who calmly drilled the catch-and-shoot three.

We love to see DeMar spacing the floor pic.twitter.com/OlWJw4VrNd

Then DeMar took it to the rim again for another bucket, and 1. Dejounte Murray got to the rack off a pass from Johnson, making it 71-61 Spurs.

Aldridge has an unfortunate collection this season of plays where he helps all the way down in the paint, and when the ball finds his man on the perimeter, he throws up his hand while still in the paint. It looks silly, and it's a good visual metaphor for how open he left Jokic on jumpers for the game.

Jokic hit that one, and a shot from 11 feet, and another three, and Pop called time with a 10-point lead down to 5. On the other end, Denver went to a zone defense that forced some Spurs turnovers.

The Nuggets ripped a 9-0 run to get back in it, but the Spurs pushed the lead back to 5. Keldon Johnson busted through the zone twice for tough scores, but Jamal Murray answered with smooth buckets in the close mid-range.

Vassell got whacked on another three, but the officials decided it wasn't a foul and the Nuggets went the other way getting free throws for a 78-77 lead.

DeRozan answered with an absurd eurostep to beat Jokic, then Gay blew past him for a layup. San Antonio doubled Jokic and forced a shot clock violation with aggressive help. Gary Harris tied the game with a three, and after some good defense both ways he gave Denver an 83-81 lead at the line.

DeMar passed to Devin Vassell who pumped at the arc, dribbled in and hit an elbow jumper. DeRozan got two quick, tough, near the basket jumpers, giving him 16 in the quarter and 30 in the first three.

16 for DeMar in the quarter, 30 in the first three

The Spurs opened the quarter with a wonderful set to get Patty Mills open for a corner three, which he knocked down.

Patty having one of those games 👀 pic.twitter.com/7wKl02QiVc

Dejounte Murray drove in transition and took a spill, but it seemed that he just got tripped up. He stayed in the game.

Devin Vassell's battle with MPJ continued, as Porter tried his best to block another Vassell three but fouled him. Vassell gambled for a steal and lost, and Porter drained the three. Vassell forced him into a travel, but then he came down and hit another three in transition.

Denver got within two, but Rudy Gay found Dejounte Murray for a second-chance dunk. Murray then got to the line for free throws.

Rudy Gay with a season-high 4 dimes and we’re in the second quarter pic.twitter.com/Xh7M5LmfxY

Jakob Poeltl beat Jokic down the floor in transition defense drawing a charge.

Murray hit his mid-range pull up, and Keldon Johnson got another power dribble for another layup.

DeRozan pump faked his way to the line, then got in close for a jumper to push the lead to 10.

Denver answered with six straight points, as Aldridge basically allowed Jokic to shoot outside jumpers. Aldridge hit a few free throws, then DeMar finished a drive with a masterful post fake for a deuce on Murray.

The battle between Dejounte Murray and Jamal Murray started with DJ attacking in pick and roll and drawing a foul. After containing a drive by Murray and snaring a miss by Jokic, Dejounte found DeMar DeRozan under the basket for a bucket.

Denver went on a 7-0 run, stopped when Dejounte blew past Jokic for a layup and DeMar found Lonnie for an open three that he canned. Walker drove and collapsed the defense, and Keldon Johnson passed to Murray who attacked Jokic for another layup.

Dejounte is a bit too fast for Jokicpic.twitter.com/T82g23tOn3

Defensive communication continued to be an issue, with Dejounte getting beat on a backdoor cut by Gary Harris for a dunk. On the next play, Jamal Murray lost DJ on a miscommunication between him and Lonnie.

Pop called a timeout, and Murray turned it over on a drive. Lonnie got back in transition to slow Harris, and Keldon came soaring in for a block. On the other end Lonnie broke down the defense and dished to Johnson, who drove right into Jokic's chest and finished a tough layup. On the next possession he caught it at the arc with a defender right there and the shot clock winding down. He calmly pulled the trigger and drained a high-arcing shot.

Jokic, Will Barton and Murray each hit threes to answer, but LaMarcus Aldridge hit one the other way and DeRozan continued to score in the paint. Patty Mills came off the bench and drilled a three to give San Antonio a 25-24 lead. After a few tip shots for Denver, rookie Devin Vassell hit a three over a good contest in the corner. His high-release appears unblockable.

Mills played some admirable defense stripping Michael Porter Jr, and he missed a good three but hit his next chance. Rudy Gay got a few buckets, the Spurs got a few stops, and they led 37-30 after finishing the first quarter with a 17-6 run.

Coming off a hard earned win over the Boston Celtics, the Spurs geared up for another tough opponent at home with a game against the Denver Nuggets.

Before the game, Coach Gregg Popovich and Lonnie Walker IV spoke about the challenges of facing a Nuggets team led by a leading MVP candidate in Nikola Jokic. 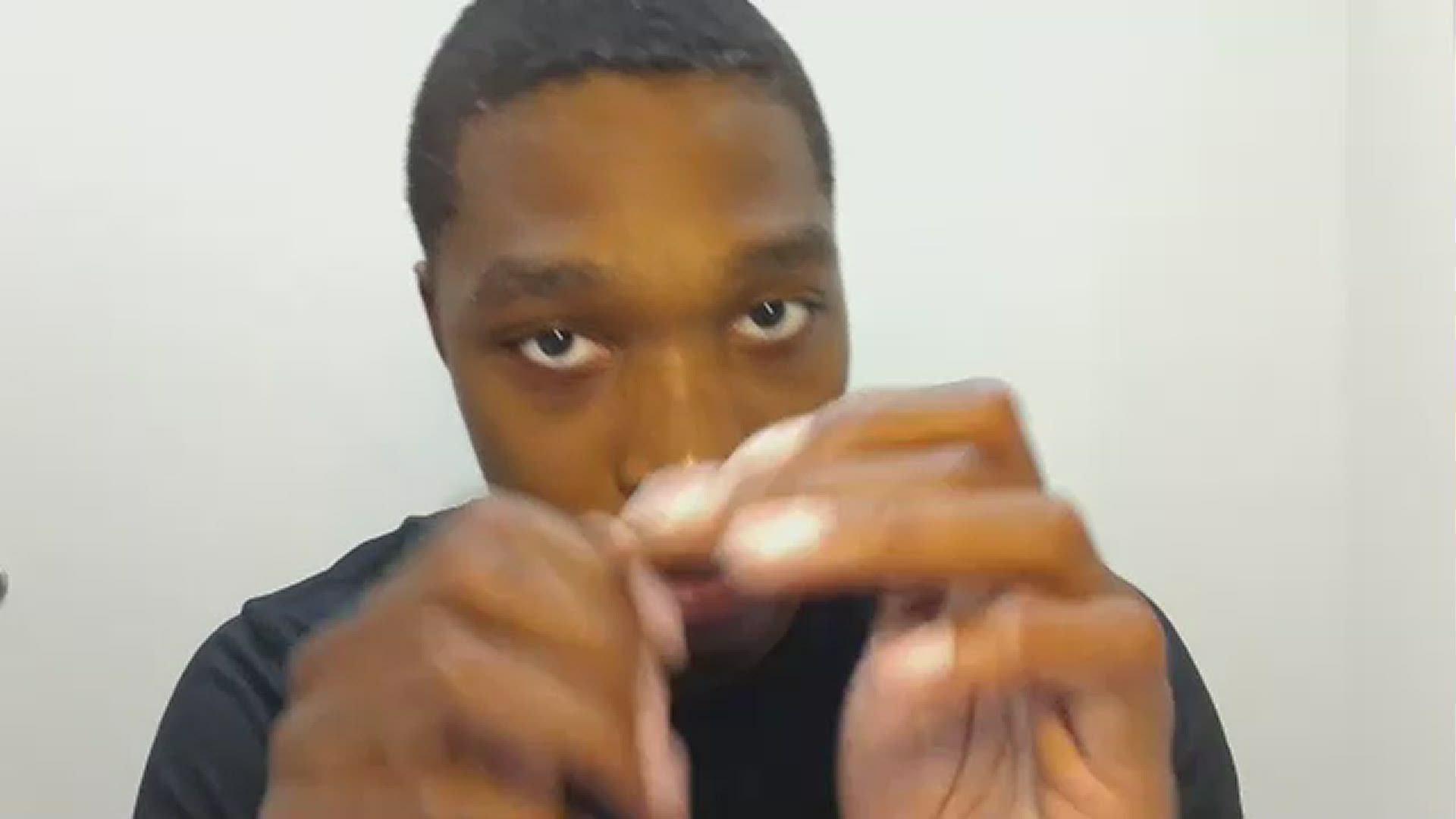 Popovich said that the schedule has difficult to start the season, but this team is coming together under difficult circumstances. At their best they've beaten the Celtics, Clippers, Lakers and Blazers, and tonight is another test.

They've gotten to 10-8 without Derrick White, who is expected to return from another toe injury tomorrow. He spoke before the game about going through rehab again and getting back into the fold.