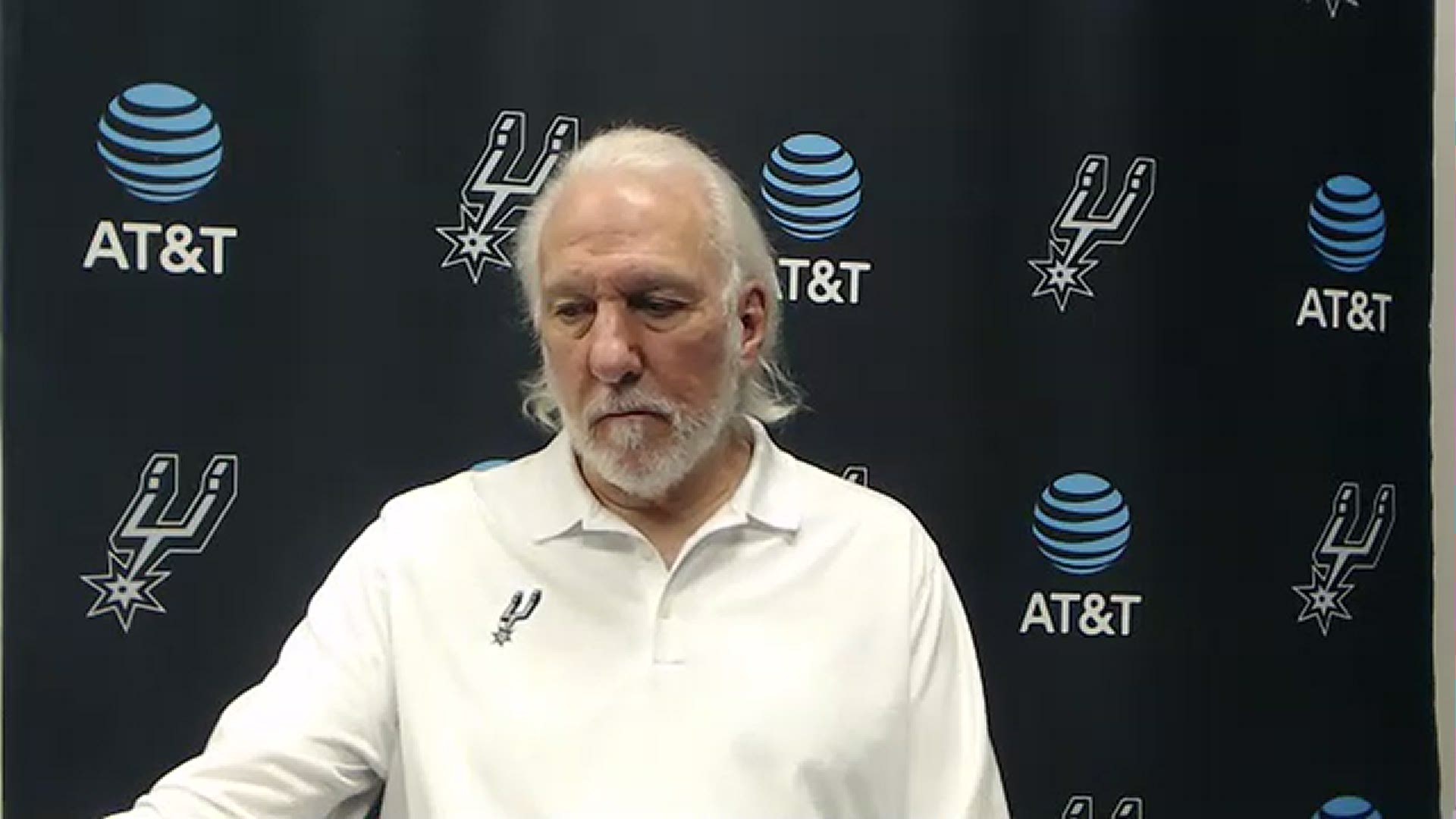 DALLAS — The Spurs broke a five-game losing streak with a buzzer-beating win over the Mavericks in Dallas behind 33 points, 8 assists and the game winner from DeMar DeRozan.

Kristaps Porzingis and Luka Doncic combined for 60, over half of the points for the Mavs, but pressure defense from the Spurs forced 8 turnovers from the pair. Dejounte Murray put up 25 points, 5 boards, 5 assists, and 4 steals, while Lonnie Walker IV had 13 off the bench including a poster dunk that was equal parts mean and powerful.

Lonnie Walker IV picked up where he left off in the third, hitting a layup and then drilling another three. DeJounte Murray knocked down a triple, then Patty Mills, and the Spurs built their lead to 99-91.

Doncic and Porzingis were able to bring the game a bit closer, but the Spurs were able to keep them at arm's length thanks to DeMar DeRozan's late scoring. He had eight of ten San Antonio points in a late stretch. He put them up 117-113 with just over a minute left, but Doncic cut it to two.

DeRozan got a good catch-and-shoot look but missed, and Doncic tied it at 117 on a eurostep on the other end.

Pop called timeout with the shot clock off.

DeRozan got the ball, circled like a shark smelling blood in the water, milking the clock until he stepped back for a deep 2, hitting it with 0.5 seconds left. Doncic missed a desperation heave, and San Antonio ended their losing streak.

Big ol' win to get off the schneid

San Antonio opened the second half on a 13-4 run to take a 64-60 lead, half tightening up on defense and half dodging open threes. Dejounte Murray, DeMar DeRozan, and Keldon Johnson all scored multiple times, carrying the load for San Antonio.

Dorian Finney-Smith put Jakob Poeltl on a poster, but his willingness to contest those shots endears him to everyone. The next trip down Doncic lobbed to Porzingis, but Poeltl busted the play up and Derrick White knocked down a three from DeMar to put the Spurs up 7 before Doncic stole three free throws from Johnson.

DeRozan drove in and missed, but Poeltl tipped it in. Dallas wound up making their run and taking the lead, but then Lonnie Walker put together an explosive run. He hit a three, then cocked it back and threw down a ferocious poster dunk directly in an opponent's face.

The Spurs trailed 89-88 heading to the fourth.

Jakob Poeltl showed off some impressive switchability on defense, sniffing out an off-ball screen for Jalen Brunson, switching onto the shooter, hanging with him on the drive, and sending his shot back with enough force to level a two-story building.

Rudy Gay got free throws, and Patty Mills hit a three between two misses. It was 7-straight points for the Spurs before Luka Doncic bounced it between Poeltl's legs for an and-1.

Gay got back to the line, the Mavs turned it over for the fourth time in under three minutes, and Gay put home a tough shot to extend San Antonio's lead back to five.

Doncic answered, but Dejounte Murray whipped a saucy bounce pass to Poeltl for an easy dunk. Dallas called timeout down 36-31, and went on a 16-5 run led by Josh Richardson, Trey Burke and Porzingis to take a 47-41 lead.

They built it out to 52-43 as San Antonio's offense sputtered. Nobody was hitting from outside, but Murray and Poeltl got a few easy ones at the rim and DeRozan got a paint jumper to go.

Porzingis had 20 points and 10 boards at halftime, leading Dallas to a 56-51 lead at the break.

Dejounte Murray got off to a roaring start on both ends, finishing a few jumpers and started 3-4 from the floor. He also slapped the ball right out of Luka Doncic's hands.

Doncic and Kristaps Porzingis ran pick and roll over and over, and San Antonio often doubled Doncic to take it out of his hands. Porzingis played well out of it, but the Spurs committed to keeping Doncic from establishing a rhythm.

Derrick White blocked a shot, DeMar DeRozan drove in for a bucket, Keldon Johnson got free throws, and Murray drained his first three of the game to put the Spurs up 15-11.

White drove in for a tough floater, but after Porzingis got to 11 points, Pop called timeout. After that, DeRozan drove under the basket, jumping and kicking it to Keldon Johnson, who set his feet and drilled a three.

Drew Eubanks hit free throws and put back Keldon's miss at the stripe, putting San Antonio up 24-17. Josh Richardson hit an in-between jumper, then Luka Doncic got back in the game and got loose for three. Pop called time with the Spurs up 24-22.

DeRozan turned it over, then Doncic assisted on a layup. DeRozan got blocked, then Rudy Gay missed on a drive that he wanted a foul on, then Lonnie Walker IV bumped Doncic after he got past.

Dallas led 26-24 after a 9-0 run, holding the Spurs scoreless for over three minutes. Lonnie drove and missed just before the buzzer, but Jakob Poeltl tipped it in to tie it at 26.

The Spurs have taken a tumble in the past three weeks, losing ten of their 12 games in that stretch with the schedule that seems to have more games against tough opponents than it does days of rest.

After dropping a pair in Denver for their fourth and fifth losses in a row, the next stop for San Antonio is Dallas for another challenge against the Mavericks.

It'll be the first of five games in seven days for the Spurs, three of which will come against solid Western Conference foes. Coach Gregg Popovich was asked about when it would come time to rest certain guys.

"Our guys get rest when they get injured," he said, half joking, but in a way that was funny because it was true. "Some guys, like, Lonnie's gotten a lot of rest. There are some guys that you worry about, like DeMar, for sure. He's been getting all those minutes every night, so at some point he's probably gonna have to take a blow here and there."

As far as Walker goes, he made his return after missing almost 10 games in a row in the previous loss to Denver. Pop said he looked aggressive and didn't hurt his wrist again, so he's good to go.