Backcourt pair Derrick White and Dejounte Murray combined for 51 points in the game, leading six Spurs in double figures. San Antonio moves to 16-11 on the season. 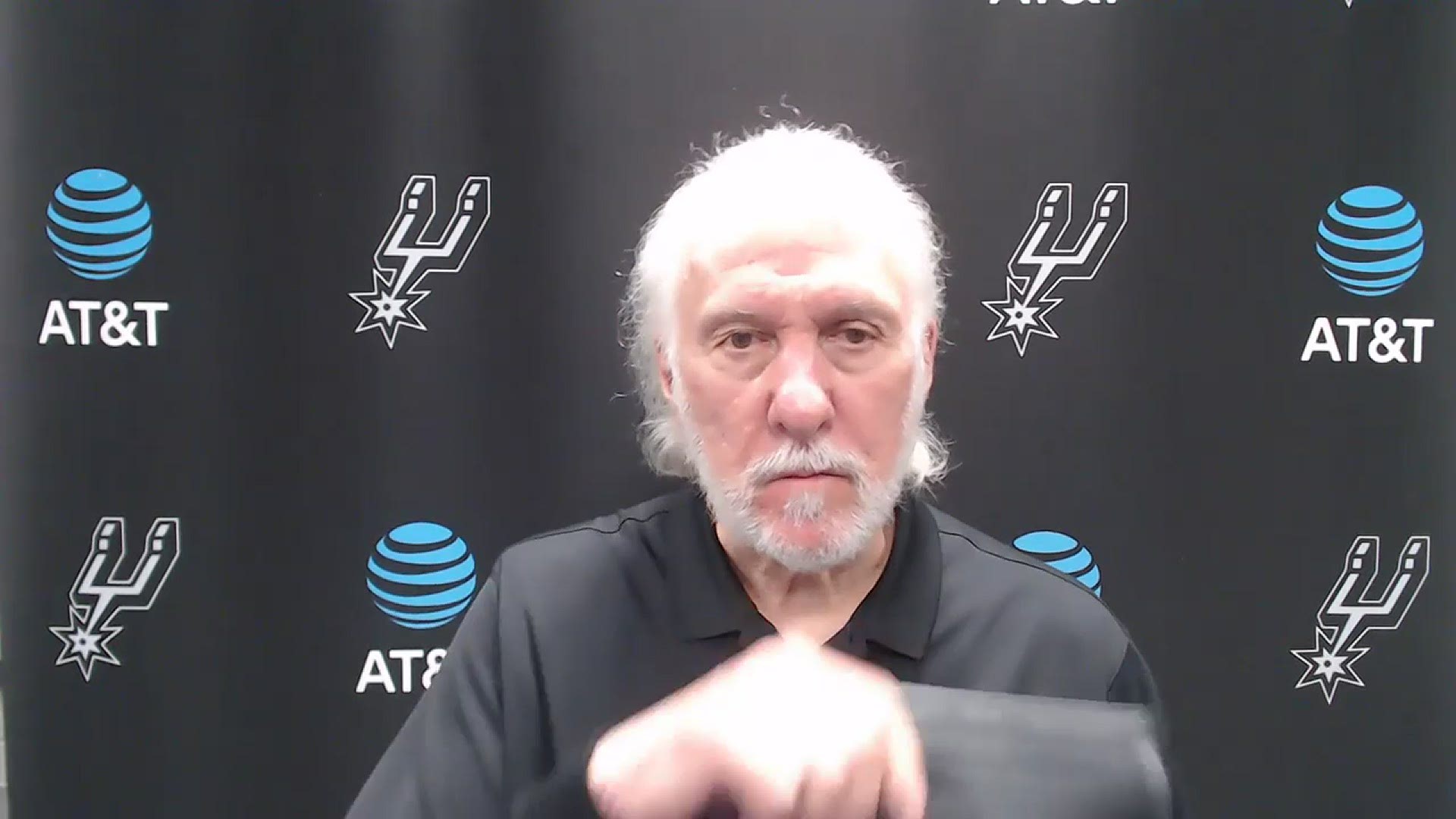 CHARLOTTE, N.C. — The Spurs exploded in the second quarter and finished strong in the fourth, knocking off the Hornets 122-110 in Charlotte.

Backcourt pair Derrick White and Dejounte Murray combined for 51 points in the game, leading six Spurs in double figures. San Antonio moves to 16-11 on the season, and they're 2-0 to start the Rodeo Road Trip.

After the game coach Gregg Popovich praised that duo, who he's happy to see playing together after injuries to both in the past few years.

"We're thrilled to have them both out there, they compliment each other well," he said. 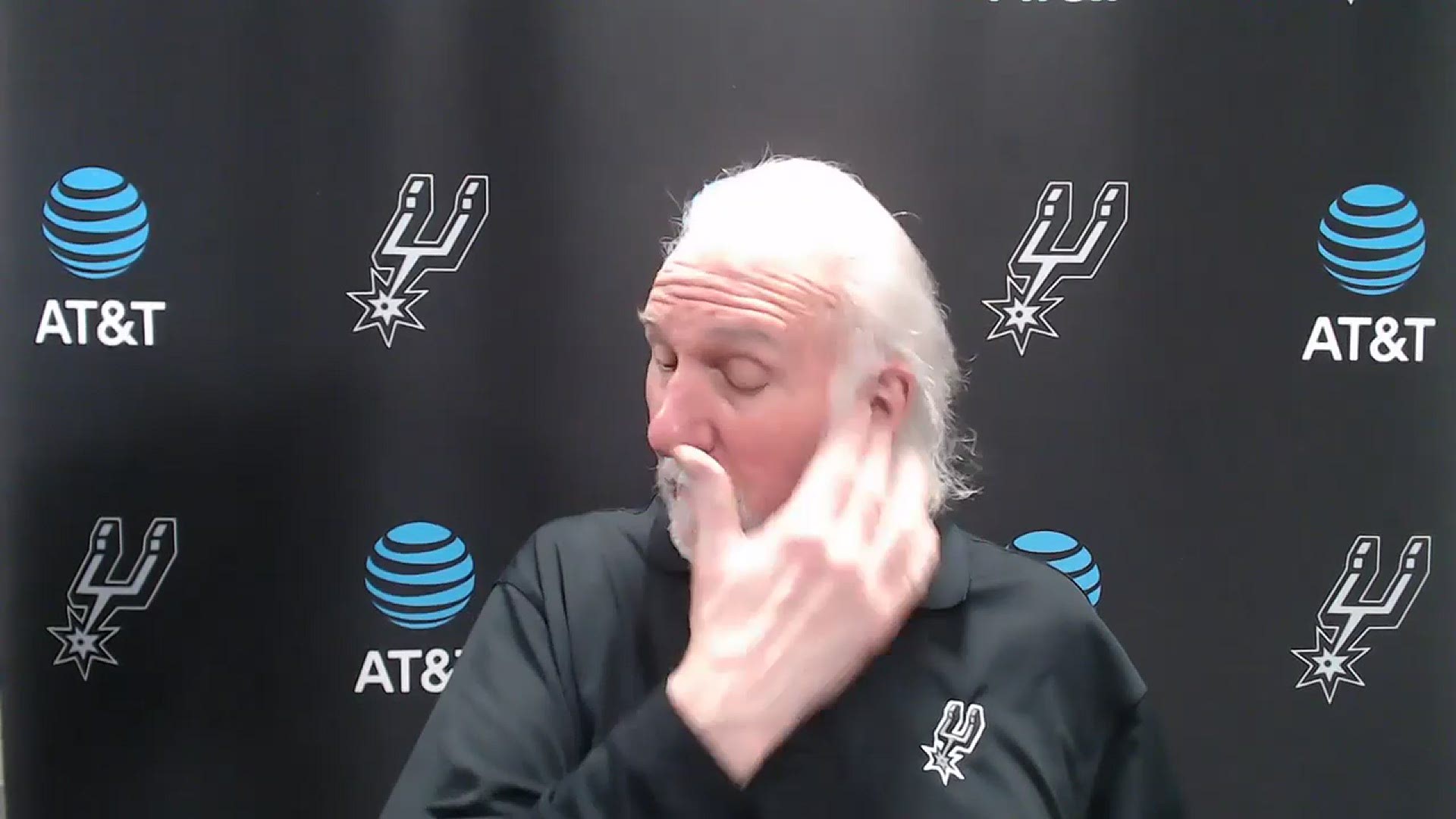 Pop said that White made a lot of wise plays and looked "frisky" down the stretch, which cannot be denied. He scored 7 points in a row, and iced the game late with a tough layup before drawing his first charge of the season. 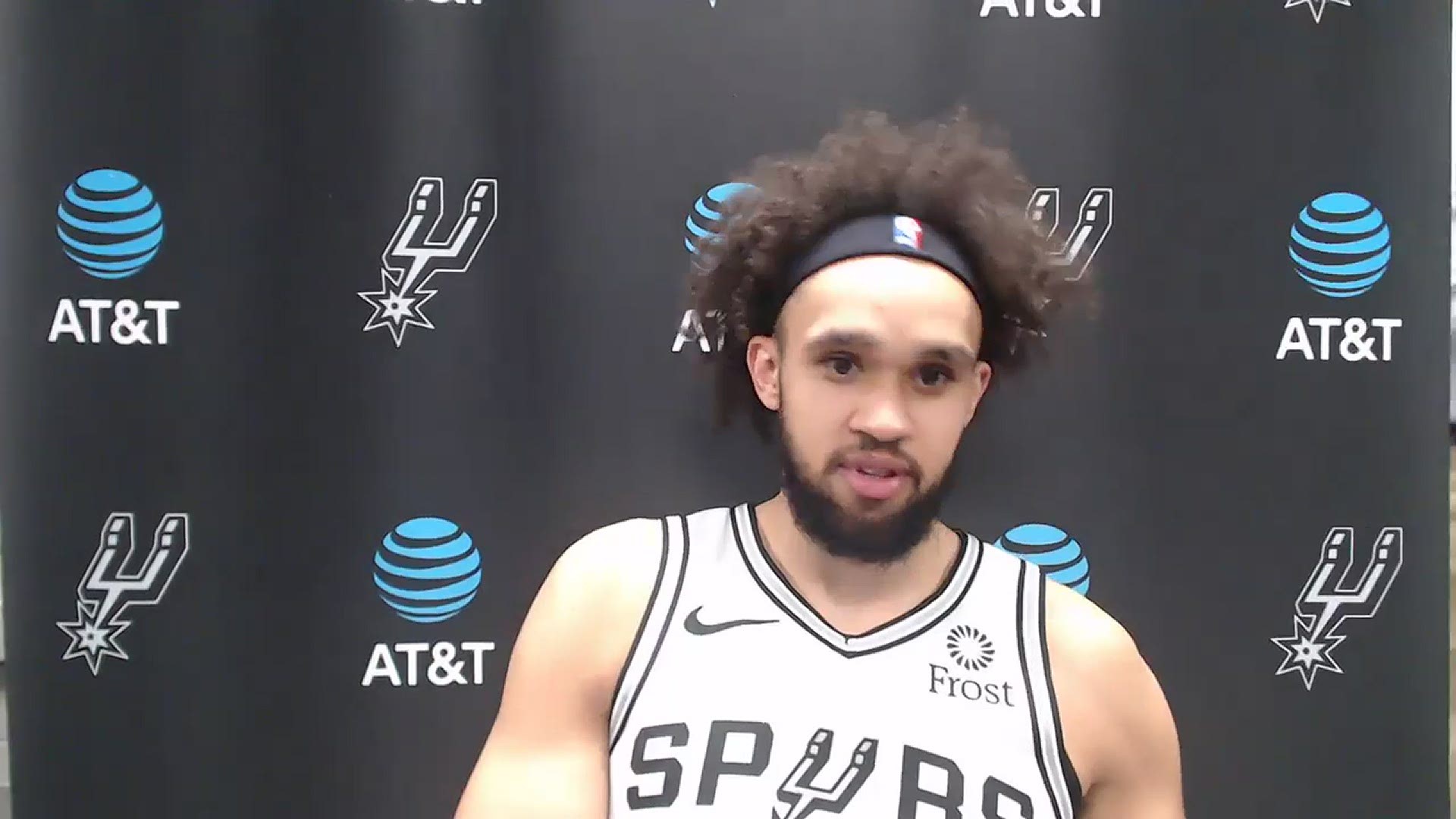 The Spurs whipped the ball around for 31 assists, led by DeMar DeRozan with 9. Dejounte Murray was next up with 6, and he said this team needs to pass the ball well to operate at a high level. 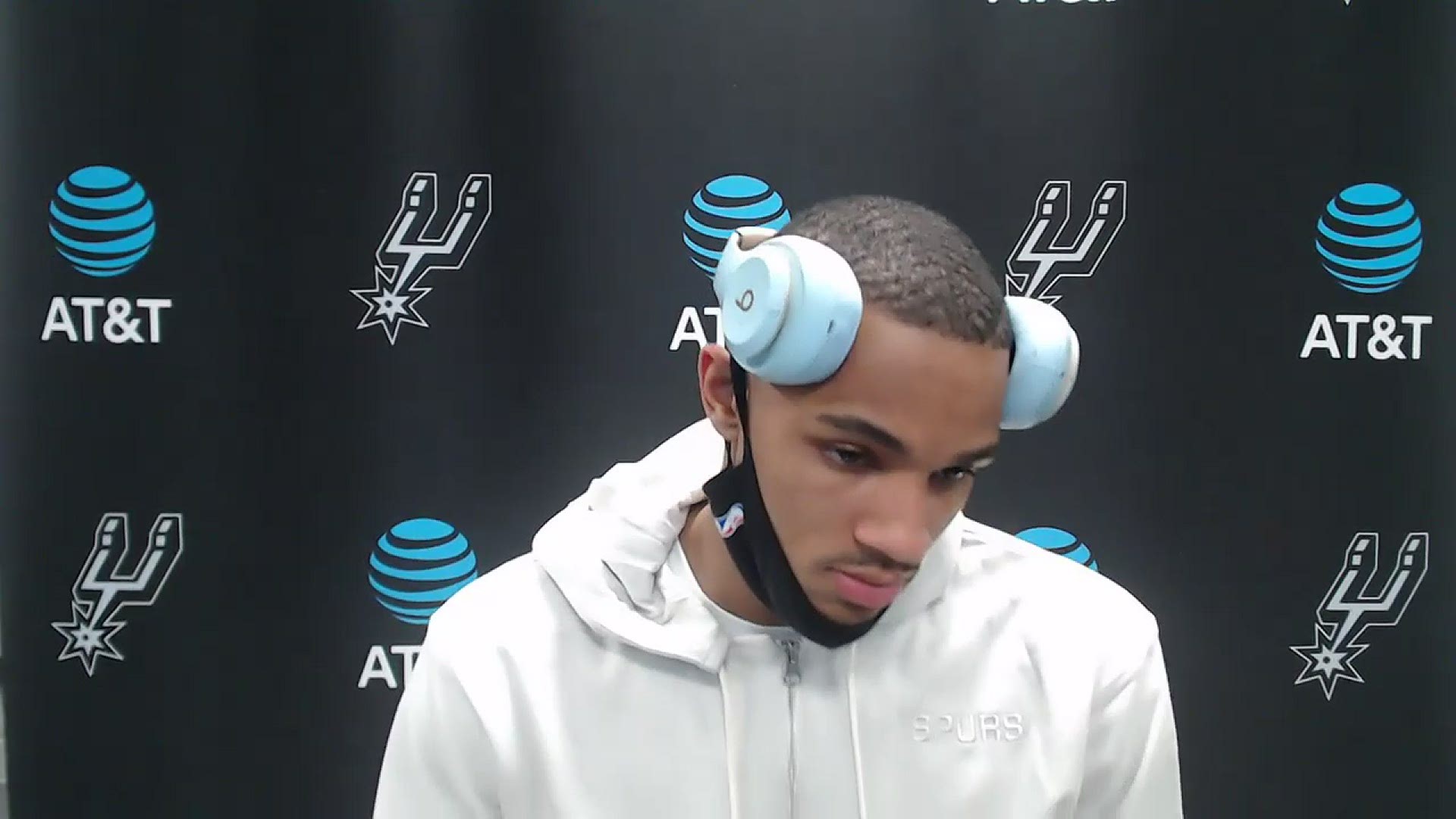 Keldon Johnson added 18 points and 8 rebounds, perhaps playing pumped up because Mariah Carey saw him sing her hit 'We Belong Together' on a Spurs social media segment. 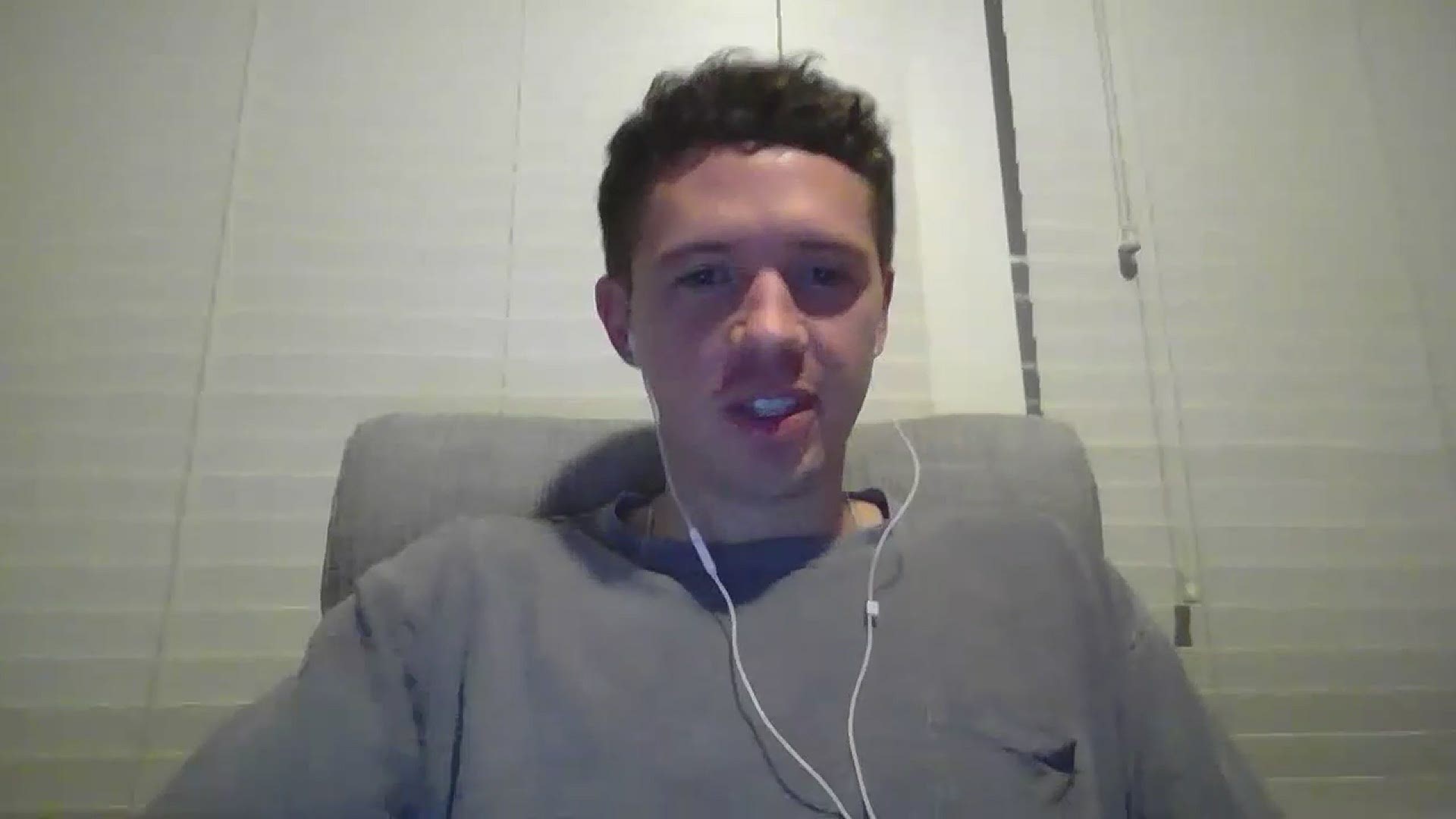 It was a total team effort, and three other players scored in double figures for the Spurs. Popovich was happy with what he got from Lonnie Walker IV in his new role off the bench, providing scoring punch with 11 points and excellent defense.

San Antonio will look to remain perfect on their Rodeo Road Trip when the head to Detroit to face a Pistons team that is 8-19, but beat the Nets and Celtics in the last week.

Gay got the ball taken from him, fought for it back, and it rolled to Derrick White who hit a jumper through contact, missing the free throw.

He got to the basket on his next possession, then answered another Hornets bucket with his fourth triple of the game.

Jakob Poeltl went straight up with LaMelo Ball and forced a miss, then found the dunker spot and Dejounte found him for a floater that pushed the lead to 11.

Charlotte fouled Poeltl on purpose given his struggles at the line this year, but he hit both.

The Hornets made a few baskets to get closer, but Derrick White closed the game out. He beat the shot clock and put the Spurs up 8 with under a minute to play, then took a charge on the other end. He finished with a season-high 25 points to lead the team.

The game evened out and became more of a back-and-forth affair with the little runs that each team went on getting shorter. The Hornets took the lead back, then the Spurs regained control behind Keldon Johnson's effort, then the Hornets took it right back, and then a Lonnie Walker IV driven run put the Spurs back in front.

The period ended with the score tied at 89.

The Spurs responded with a quick 8-0 run to start the second, with Drew Eubanks finishing a hook shot and Patty Mills and Rudy Gay each hitting a three.

After a timeout, the Spurs got another stop and and Rudy Gay got to the rim for a scoop and-1. Charlotte stopped the run with a deep three, and then continued to hit tough shots from well beyond the arc.

San Antonio hit 16-17 shots to start the period, and they took a lead behind strong play from Lonnie Walker IV, Keldon Johnson and others.

The Spurs put up 47 points in the second quarter after just 17 in the first, finishing the half up 64-59.

The Spurs came out flat and immediately fell in an 11-2 hole. They generated some decent looks offensively but couldn't hit them, or get stops. They clawed back to 20-17, then gave up a 13-0 run to end the quarter.

The San Antonio Spurs continue their Rodeo Road Trip with a contest against runaway Rookie of the Year candidate LaMelo Ball and his Hornets.

Ball is an otherworldly passer, 19 years old, and has averaged 20 points, 6 rebounds and 6 assists in his last ten games, leading Charlotte to wins in six of their last nine. He'll miss Gordon Hayward tonight, who is averaging a team-high 22 points per game.

San Antonio will be without LaMarcus Aldridge for a sixth-straight game since tweaking his hip against the Grizzles two weeks ago. The Spurs are looking to push their record to 5-1 since then, tightening up on defense thanks in part to Jakob Poeltl, who is filling in well as the starting center.

Before the game, coach Gregg Popovich said that Aldridge was still rehabbing and would be out for another little while. He does like the way that Poeltl, Rudy Gay and Drew Eubanks have stepped up.

Poeltl is averaging 10 points, 9 rebounds, and 2.7 blocks per game in February, and adding so much more on both ends outside the box score. He doesn't provide any of the spacing that Aldridge does on offense, but applies significantly more pressure at the rim.

San Antonio's starting backcourt tandem of Dejounte Murray and Derrick White will get a great opportunity to slow an exciting young guard in Ball. Lonnie Walker IV started in White's place to begin the year as he recovered from multiple toe injuries. Walker should get to showcase his ability a bit more with the second unit, but he's still adjusting to that role.

Pop's former assistant coach James Borrego has the Hornets buzzing along this year, and those guys always tend to give their mentor their best shot. Before the game, Popovich praised him as a coach, called him a people person, and said the two talk regularly on a professional level and a family level as well.