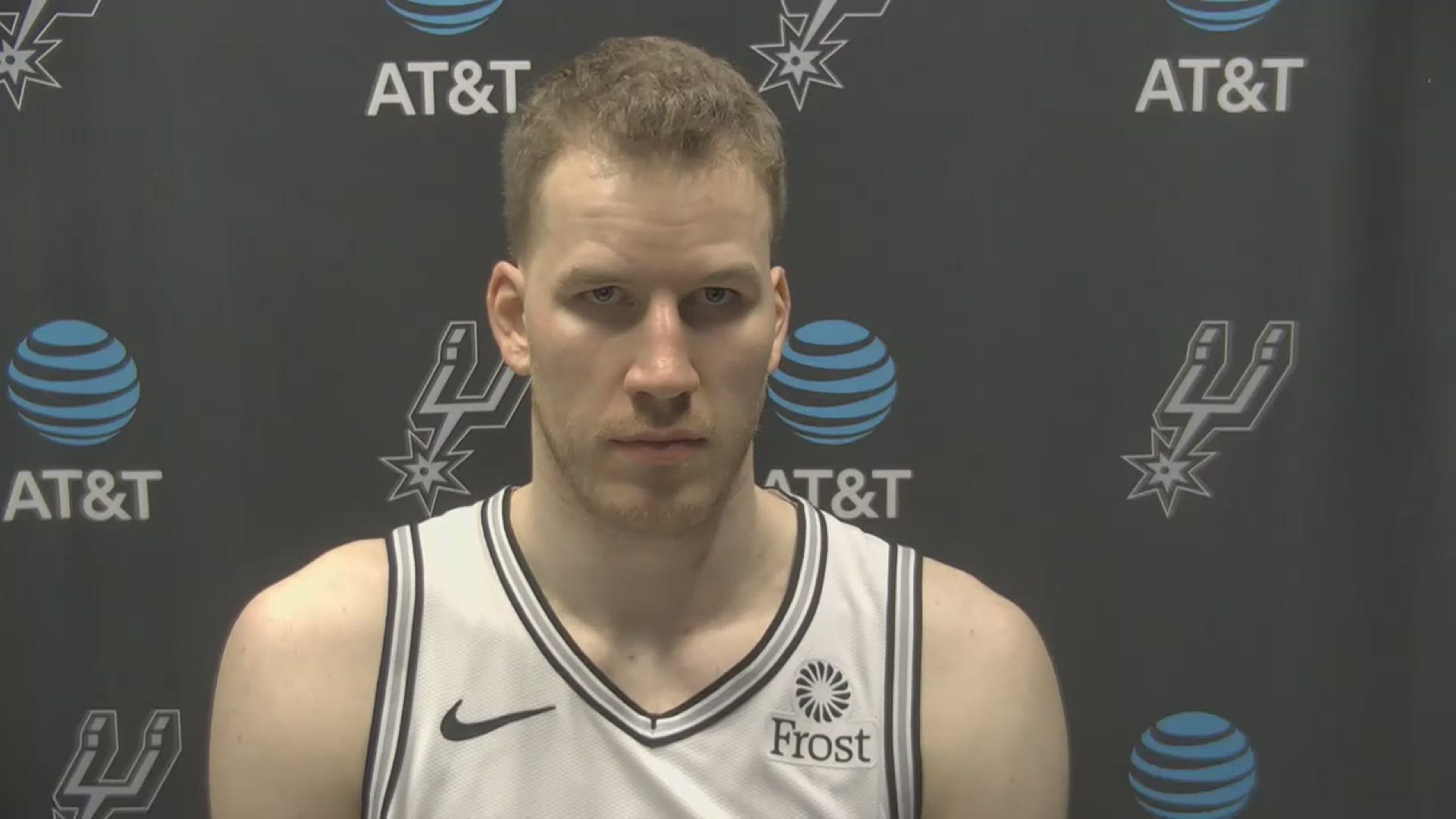 SAN ANTONIO — In their biggest game of the year so far, the Spurs were able to scrap, stick with it, and beat the Pelicans in New Orleans behind a clutch 32-point game from DeMar DeRozan.

With the win, San Antonio climbed to 30-29 on the year and made it incredibly difficult for the 26-34 Pelicans to catch them for a spot in the play-in game. The Spurs are now 4.5 games ahead of New Orleans with 13 games remaining. Now ninth in the West, they're just a half game behind Memphis for eighth, and 2.5 games behind Dallas in sixth. If the Silver & Black can get there, that would be a guaranteed playoff spot.

Below, DeRozan, Derrick White and Coach Gregg  Popovich react to the win. 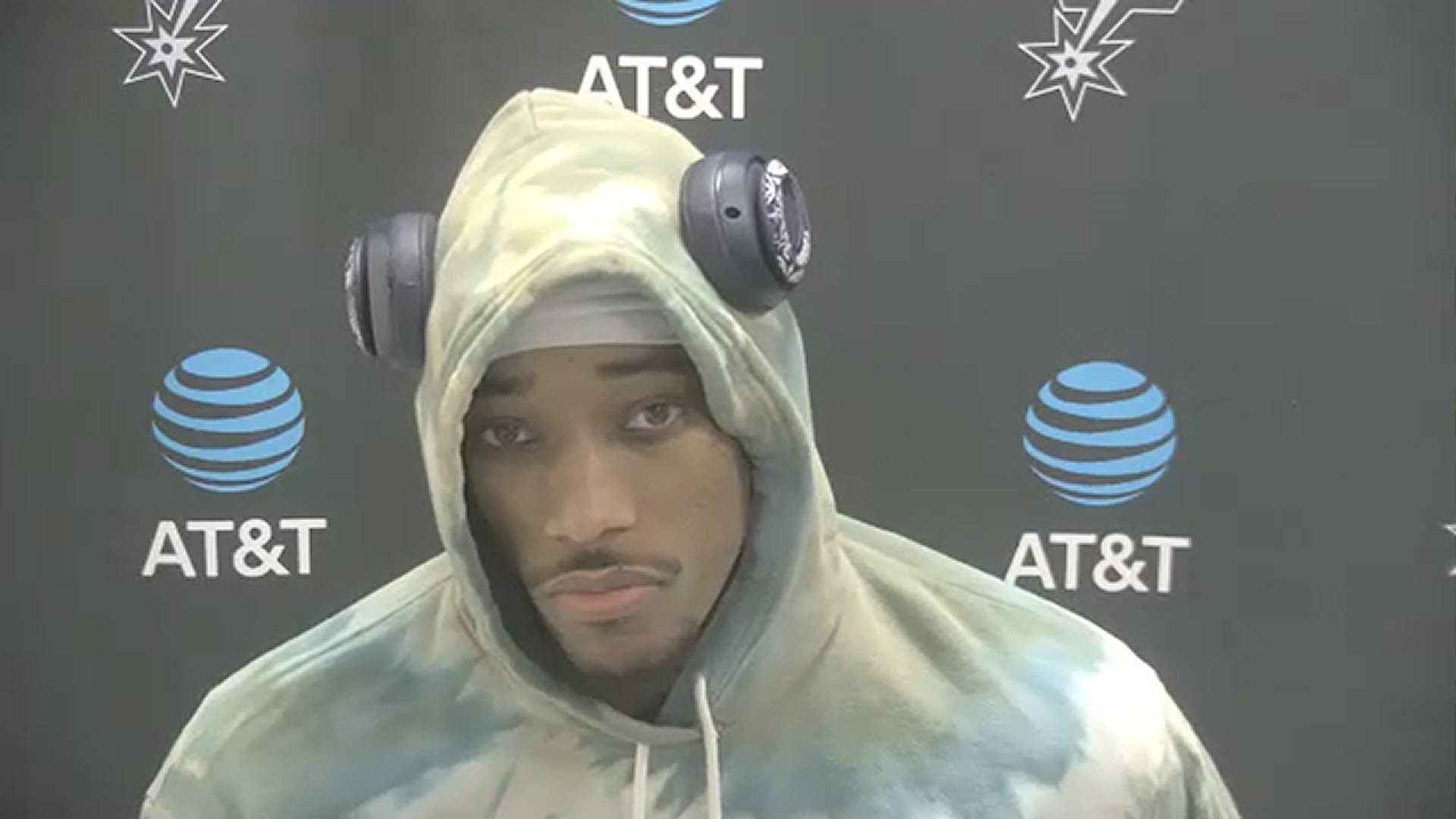 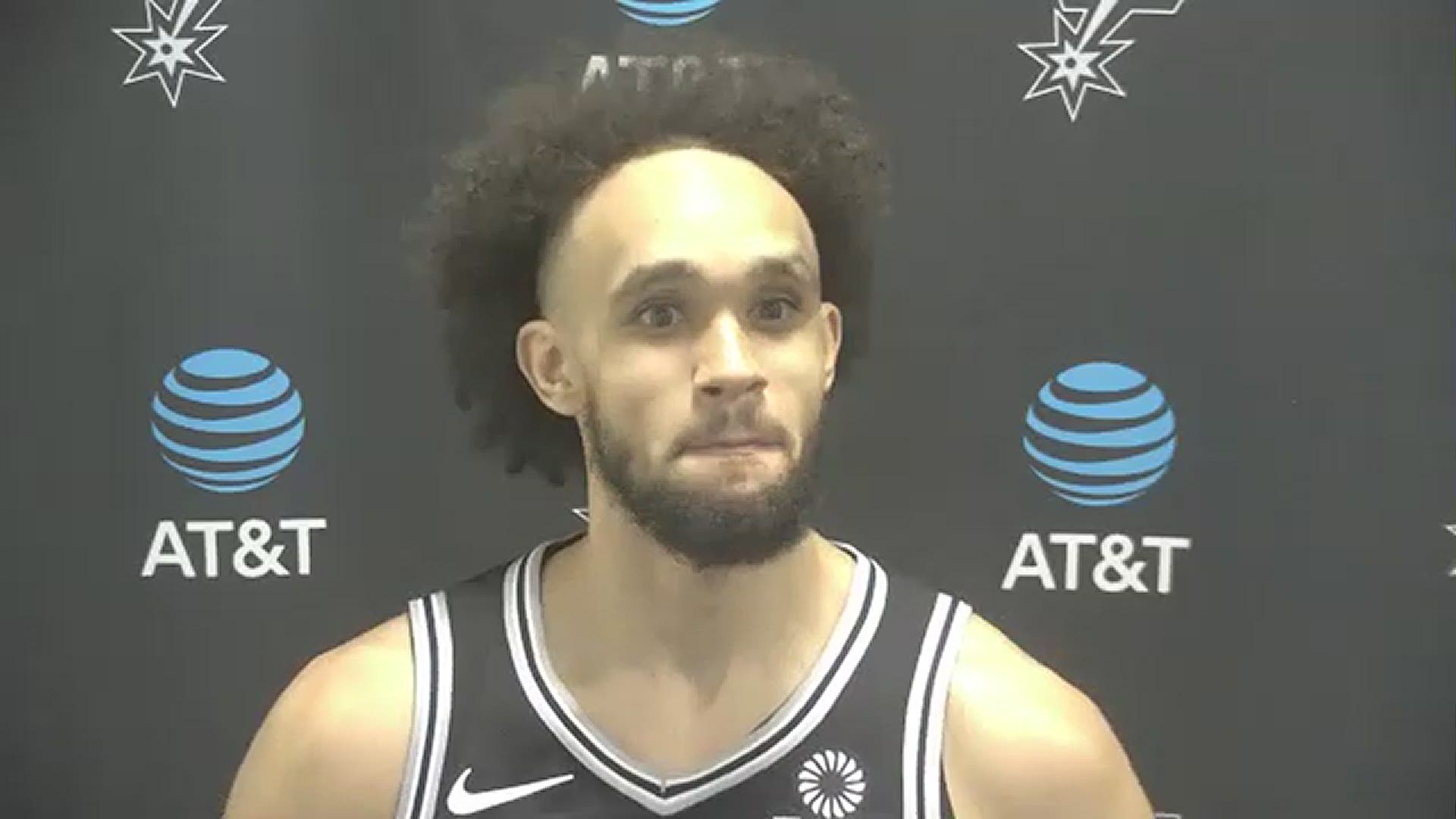 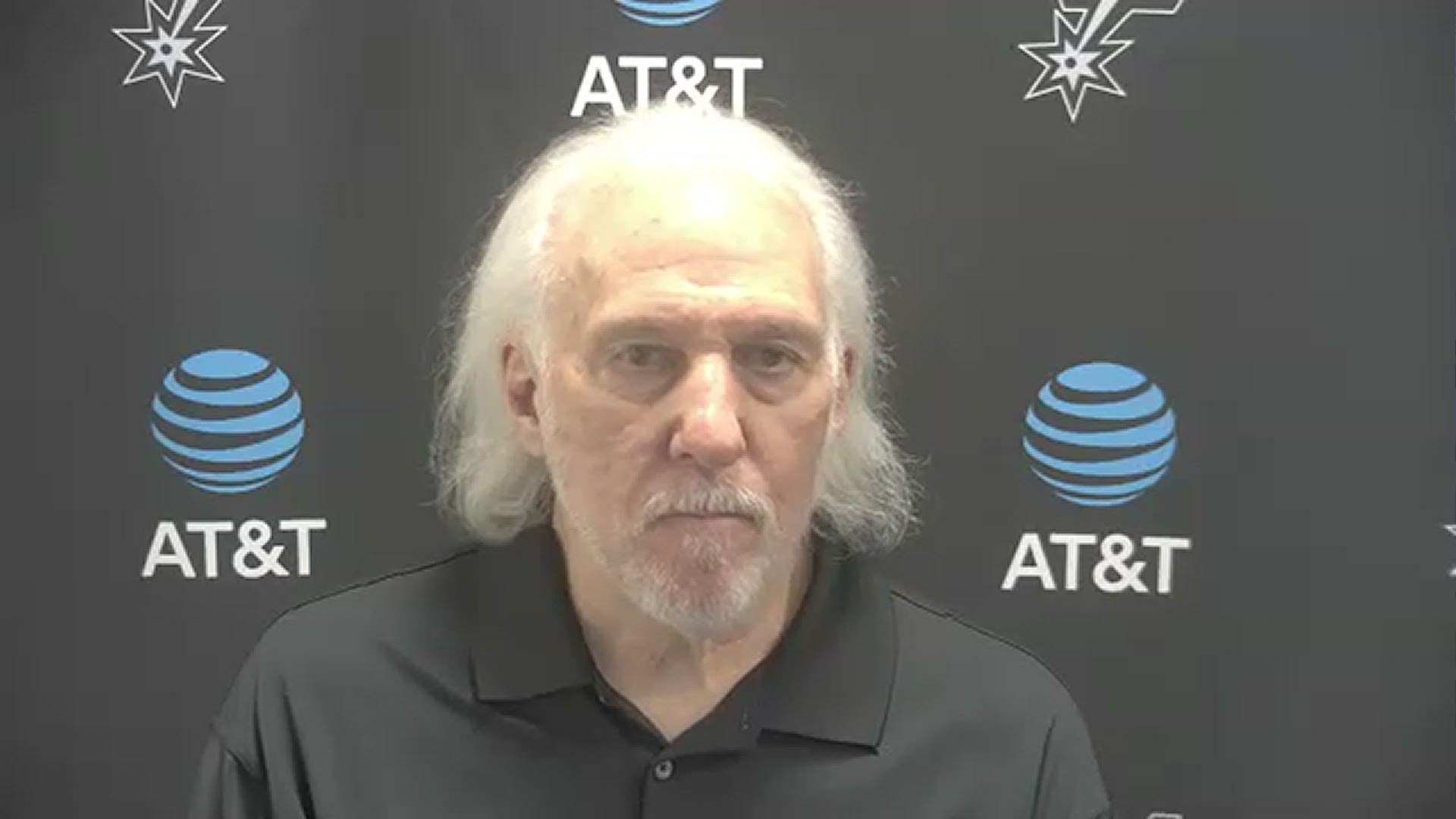 The Spurs opened the quarter with a smart set play to get Jakob Poeltl an easy dunk.

Zion Williamson put back his own miss, then posted up beating Keldon Johnson baseline and finishing through Jakob Poeltl to tie it at 88, but missed the free throw for the lead.

Derrick White found Patty Mills on a back-cut for a layup, then White leapt for a two-handed snatch block on center Jaxson Hayes. Keldon Johnson put the Spurs up six with a nasty reverse layup that looked like it had little chance of going in.

Brandon Ingram hit from mid-range, then Zion bullied his way in for two in a row to tie it at 94. DeRozan got stripped down low, Ball scored in transition and gave the Pelicans their first lead in a long time. He pulled up for three and drilled that too.

San Antonio went cold scoring, and Zion got back to the rim. Derrick hit a floater, then a catch-and-shoot triple. After a stop DeRozan isolated on Williamson, drove into him, drew a foul and hit the shot and free throw to put the Spurs back in front at 102-101.

DeMar took it through Zion in clutch time and got it

With 2:23 left, Ingram got a soft fifth foul on White and gave the Pelicans a 103-102 lead. DeRozan got a long offensive board, got to the line from the post, tied it, then put the Spurs back up by one.

Zion attacked the rim once more, but Steven Adams held Poeltl and the ball went the other way. On another second chance, DeRozan hit a mid-range shot to put the Spurs up three.

Zion posted up on a broken possession and finished a tough one inside.

DeMar came the other way, stepped to his side at the elbow, and drilled the shot to make it 108-105.

DeMar, for the win, onions pic.twitter.com/oO9G6Rfjl4

Ball missed a three, Poeltl got the board, and Dejounte Murray went to the free throw line with just under 20 seconds left.

He hit both to give his team a 110-105 lead. After some fouling and some dribbling out, Ingram hit a three just before the buzzer but it didn't matter as the Spurs won 110-108.

Not pretty, but Spurs beat Pelicans 110-108 in the most important game of the year

Brandon Ingram opened the second half with a few jumpers, joining Zion and Lonzo Ball in double-figure scoring. Keldon Johnson knifed through the defense for free throws, DeMar DeRozan posted up for a j, and Dejounte Murray found Johnson for an easy transition layup.

Jakob Poeltl got his fifth block of the game, DeRozan knocked down free throws, and San Antonio built their lead to 70-59. Derrick White stuck with Ingram on a fake, then drew a charge. Ball hit a tough stepback three, and Pop called timeout.

Derrick White is the main reason Brandon Ingram isn’t having a good nightpic.twitter.com/Ij4BEbphhA

Derrick drove in for a floater, and DeMar posted up for another jumper, but Ball hit his fifth three of the game. Ingram got three buckets, taking advantage with his main defender Derrick on the bench.

Drew Eubanks came in and drew several fouls to help San Antonio's offense, which was beginning to sputter a bit. He pushed the lead back to six, but an open three on the other end halved that.

DeMar came back down and got more free throws. Eubanks blocked a shot, turned over the outlet pass, then blocked a shot again. Zion secured an extra possession for New Orleans, he seemed to tip it out of bounds, but the ball stayed and Jaxson Hayes finished a lob. He hit free throws too, tying it at 82 to erase San Antonio's 11-point lead.

Patty drove baseline and kicked across the court to White for an open three.

The Pelicans opened the second quarter on an 11-5 run to cut San Antonio's lead down to just one.

Derrick White bailed out a tough possession with a jab step and a three in Lonzo Ball's face.

Derrick makes something outta nothing pic.twitter.com/KNAkGnbWuR

Things got sloppy on both ends as each team turned it over and whistles sounded off regularly. With Rudy Gay out, both Luka Samanic and Devin Vassell got some run in the first half. San Antonio built the lead out to six before Zion came back in with a little over four minutes in the half. DeRozan hit an and-1, and the Spurs briefly built their lead out to 10.

They really tried to say DeMar didn’t get an and-1 herepic.twitter.com/J244HKk4IS

New Orleans cut it back to five, but DeRozan found Samanic in transition for a powerful and-1.

Samanic did his best against Zion, but the big man got a few and-1s of his own inside.

Luka fired up after the big dunk 😤 pic.twitter.com/f2MNMfqzle

Poeltl made a few big stops inside, hit two free throws, then took a charge on Zion. It was challenged and reversed, and Williamson went to the line where he missed both.

Spurs up 61-52 after a strong first half

San Antonio went on a 12-0 run early, building a 14-6 lead as they generated solid opportunities at the rim and open looks from three. Keldon Johnson knocked down a few early triples, then finished a thunderous dunk in transition.

Dejounte Murray and DeMar DeRozan got in on the scoring, pushing the Spurs. lead to 23-14. New Orleans went on their own run, getting it back to 27-24 as San Antonio struggled to score.

We love a good fake handoff, don’t we folks? pic.twitter.com/c4e1eezz7v

Drew Eubanks got free throws, then Patty Mills stole it from Zion and found Lonnie Walker IV on the break for a finger roll to make it 31-24 after a quarter.

The Spurs faced two second-half runs by the Pistons, but staved off both and won 106-91 without three key playmakers.

"It's always a good sign, sometimes you don't," Spurs coach Gregg Popovich said regarding that ability to weather the storm. "When you do, it adds to your experience, makes you feel more confident, and you kinda learn that an NBA game is a long time, and you've gotta go out and play and keep on truckin'."

Derrick White led the way with 26 points and 8 assists, adding 7 boards, a steal and 3 blocks. His floater was on point, and he had to take a bigger on-ball role with DeMar DeRozan and Dejounte Murray out for this one.

"Dejounte steals a lot of the rebounds," he joked, deadpan. "And DeMar was out so I mean, there were a lot of plays that I felt like I had to step up and pick up their slack."

He said he'd been disappointed in his floaters lately, and focused on hitting the close ones tonight. As far as getting back to where he was in the Orlando bubble, and where he wants to be, he's getting close.