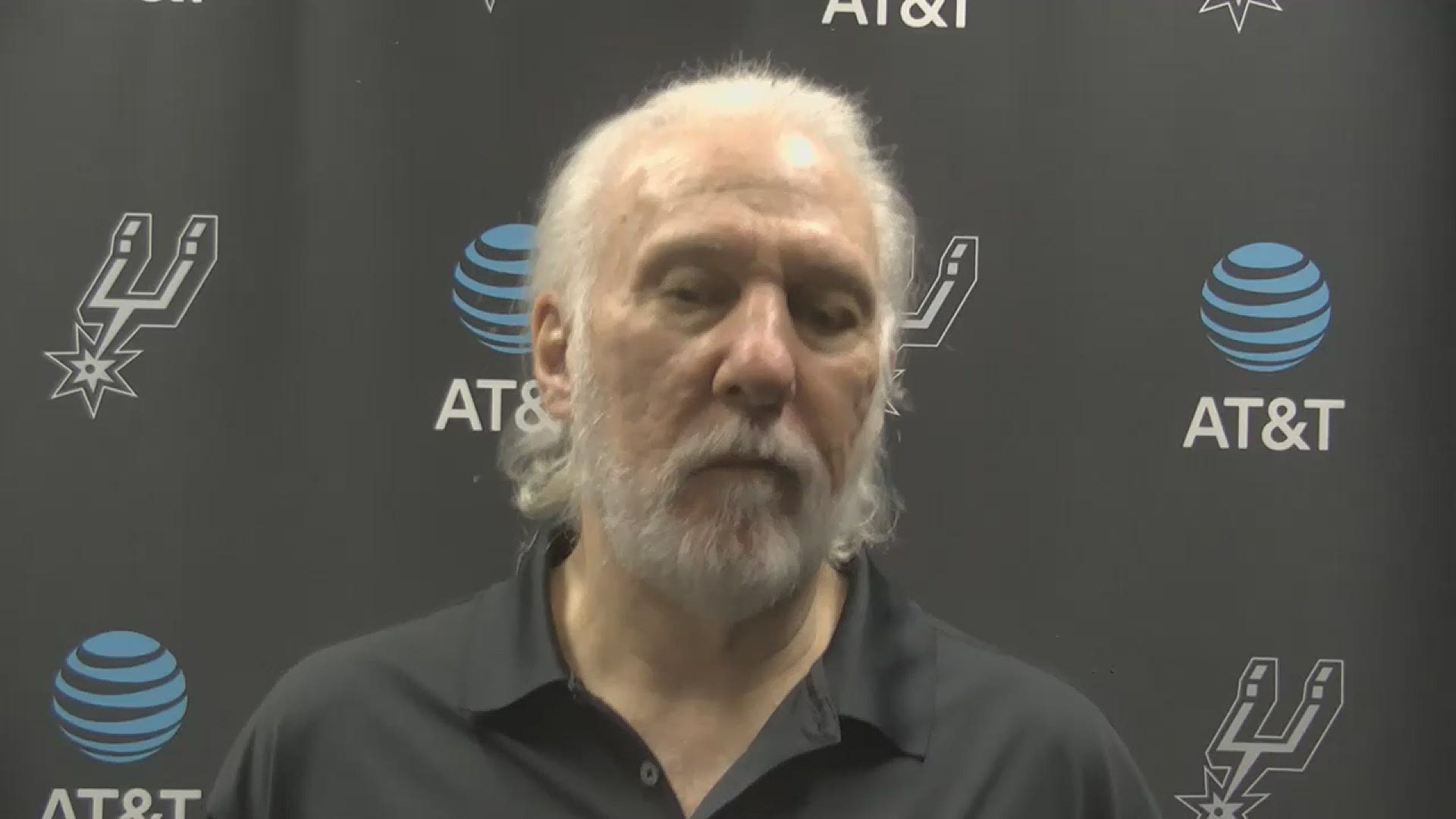 San Antonio opened the period with a good stop and Derrick White came down for another three, but missed. Minnesota opened on a 4-0 run to make it a 15-point game, and Pop called time.

DeRozan got to the rim a few times, but Minnesota kept hitting. Trey Lyles hit a big three, and Devin Vassell picked off an inbound pass and found Lyles, who hit a free throw. to cut it to 10.

After a Timberwolves turnover, DeMar drove for a dunk attempt but got fouled instead. He cut it to 8. San Antonio's defense kept holding, and DeRozan got fouled on a driving gather but the referees gave a side out instead of shots.

San Antonio's young guys got good threes, but missed. San Antonio's defense held again. Lyles got to the line again after pumping at the arc and driving. He cut it to 7, going 1-2 again. It was a 9-0 run for the Spurs before a Beasley floater.

DeMar came down the other end and absolutely crammed it for an and-1 dunk. He smashed the rim, but didn't touch it on the free throw to make it 6.

Poeltl came in and stuffed D'Lo in the paint. White came in for a floater to cut it to 4, and they forced another miss. DeRozan came down and bulled through a guy for an open layup to make it 99-97 on an extended 18-5 run. Mills made it 20-5 on an absurd circus layup, tying the game at 99 after forcing a miss. He played more good defense on the other end, and Poeltl hit a layup through contact for the lead, San Antonio's firtst of the game.

Russell tied it back on the other end, but Murray found Poelt for another layup. Derrick White stuffed Minnesota's center and tried to take a charge on Beasley, but couldn't.

With the game knotted at 103, DeRozan got to the line with a pump fake again, hitting both. D'Lo got to the rim with a nice hesi to tie it again.

Minnesota smartly hacked Poeltl, sending him to the line where he came in shooting 25%. He hit the first and missed the second, but Derrick White stole a board and DeMar knocked down another shot to push it to 3.

D'Lo got to the line, but missed the first. DeRozan found Lyles in the corner, and he drove for a clean layup to make it a 4-point San Antonio lead. A Minnesota putback made it 110-108, but D'Lo missed a tough one. On the other end DeMar faded from his spot, but missed.

San Antonio played smothering defense on Beasley at the rim, and luckily the officials swallowed their whistles.

Pop called time up two with 13 seconds left on the shot clock and 27 left on the game. DeRozan faded, missed, but got fouled. He missed the first and hit the second, leaving the window open for Minnesota.

DeMar DeRozan opened with a bucket to cut it to 9, then the Spurs got a good collective stop at the rim. DeRozan got fouled, but it got challenged and was actually a block.

Dejounte Murray grabbed a board, went coast to coast and came off a Poeltl screen for a free-throw line jumper that he canned. After the Spurs let Minnesota walk into another three, Dejounte answered with his own.

Poeltl got a nice layup on a feed from Keldon, but Malik Beasley picked off DeRozan and took it the other way for a bucket. He came back and found Dejounte for another triple in the corner.

San Antonio played some decent defense for stretches, but the Wolves were hot anyway and pushed the lead to 79-66. Keldon Johnson came out, spun through the defense and got an and-1 to cut it to 10.

This is rough but at least Keldon is doing Keldon things pic.twitter.com/xNQNBNrExP

Lonnie drove into a body and missed, but Poeltl put it back. Minnesota went cold from the outside as the Spurs made better contests, but they continued to miss their own shots.

Johnson made a great steal, pushed in transition, and Lonnie missed a good corner three. Poeltl got the Spurs a second chance, but Walker was stripped on a drive. Beasley continued his red-hot shooting, hitting a mostly covered look from deep.

Derrick White made a wonky, lofted lob to Poeltl who found it and finished in close. He got a block on the other end, then Derrick found Keldon in the corner and he drove for a screaming layup.

After another block by Jak, Derrick hit a triple on the break. Patty got a corner three at the buzzer that would have cut it to single digits, but he missed and so did a follow-up attempt.

Patty Mills opened the quarter with an open three to cut it to one, but the defense gave up five in a row. Derrick White ran pick and roll and dropped it off to Eubanks for an and-1 layup.

They cut it to three, but gave up a three and a turnover into a transition layup forcing a timeout down 43-35. After a few more breakdowns forced by Ricky Rubio, the Spurs fell down 50-40 and called time again.

The lead stayed around 10 as Minnesota continued to create threes and layups while forcing the Spurs out of anything easy. There was a nice little pick and roll between DeRozan and Trey Lyles, who dropped it off for Jak for a dunk.

Fun little drop off pass from Lyles for a Poeltl Jam pic.twitter.com/ThohlpN5e9

Minnesota pushed it to 14, but Patty closed the quarter by abusing a big man on a switch for an and-1 layup to make it 65-54 at halftime.

The early minutes were sloppy both ways, but Poeltl did a good job of making it sloppy for Minnesota. His rim protection was solid and he blocked Anthony Edwards, but the Timberwolves hit a few outside shots to build a 12-6 lead.

The Spurs offense struggled, turning it over twice and shooting just 3-9 from the floor to start. DeRozan hit a mid-range jumper, then D'Angelo Russell got Keldon in the air with the pump fake that DeRozan does so well.

The Spurs forced it, and appeared to miss the spacing Aldridge provides. Minnesota built a 19-10 lead and Ricky Rubio picked off a pass from Devin Vassell, but Rubio gave it back to Dejounte Murray in transition, and Murray found Vassell for a pretty and-1.

DJ on the feed, Devin on the finger roll finish pic.twitter.com/tHH1k13gmx

Rubio broke down the defense and found a wide-open Malik Beasley in the corner for three. Vassell hit a pick and roll floater, Poeltl forced a stop on the other end, then finished a pop a shot in close.

Derrick White came in and hit a three on a pass from Patty, then tried to return the favor after a Devin block, but Mills missed. After an Edwards three, Vassell got another mid-range shot to go.

Good to have you back, Derrick pic.twitter.com/zevJoikhcq

The Spurs brought Drew Eubanks in and briefly went to a zone. Jaden McDaniels got all the way up and tried to spike it through, but Eubanks met him at the rim and sent it back with authority.

Minnesota continued to score, but DeRozan got to the line, hit the free throws, then jumped into a chest after a pump fake, hitting a silly-looking and-1.

San Antonio trailed 33-29 after the first.

Coach Gregg Popovich said before the game that LaMarcus Aldridge was dealing with a hip issue and would likely miss more than just this game, and Jakob Poeltl would start in his place.

He said that Rudy Gay tweaked his hip last game, and it was bothering him today, but he expects him back by the weekend.

San Antonio followed up big wins over Boston and Denver with back-to-back blowout losses to the Memphis Grizzlies, losing again on Monday night 133-102 and falling to 11-10 on the season.

It was the kind of thing where afterward, coach Gregg Popovich came out, said everything he had to say in one go, and walked away.

"Give a lot of credit to Memphis, they played great both games," Popovich said. "They were just tougher in so many ways than we were, their physicality on defense, their execution on offense. We were really behind, in a 48-minute game I'd say that probably in the third quarter we looked like we've looked lately for about six minutes, but other than that, they sliced us and diced us, and deserved the wins for sure."

"It had nothing to do with we didn't shoot well, or we did this or we did that, they kicked our butts, and we did not play the basketball we've been playing, for whatever reason," Pop said. "We'll stick together, we'll go back to work, but those were two very tough losses by a team that really executed well, and I give them full credit."