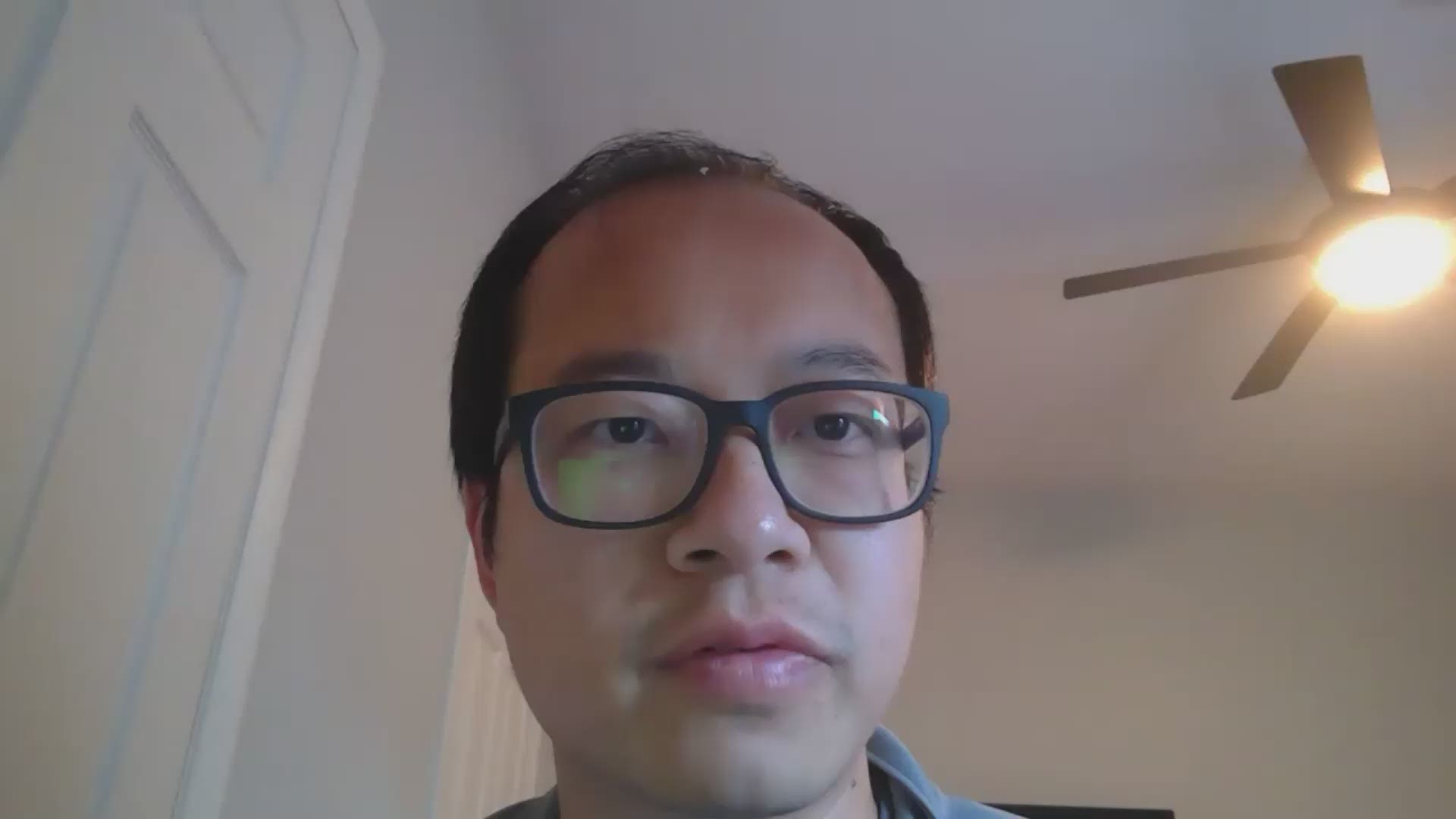 San Antonio followed up big wins over Boston and Denver with back-to-back blowout losses to the Memphis Grizzlies, losing again on Monday night 133-102 and falling to 11-10 on the season.

It was the kind of thing where afterward, coach Gregg Popovich came out, said everything he had to say in one go, and walked away.

"Give a lot of credit to Memphis, they played great both games," Popovich said. "They were just tougher in so many ways than we were, their physicality on defense, their execution on offense. We were really behind, in a 48-minute game I'd say that probably in the third quarter we looked like we've looked lately for about six minutes, but other than that, they sliced us and diced us, and deserved the wins for sure."

"It had nothing to do with we didn't shoot well, or we did this or we did that, they kicked our butts, and we did not play the basketball we've been playing, for whatever reason," Pop said. "We'll stick together, we'll go back to work, but those were two very tough losses by a team that really executed well, and I give them full credit." 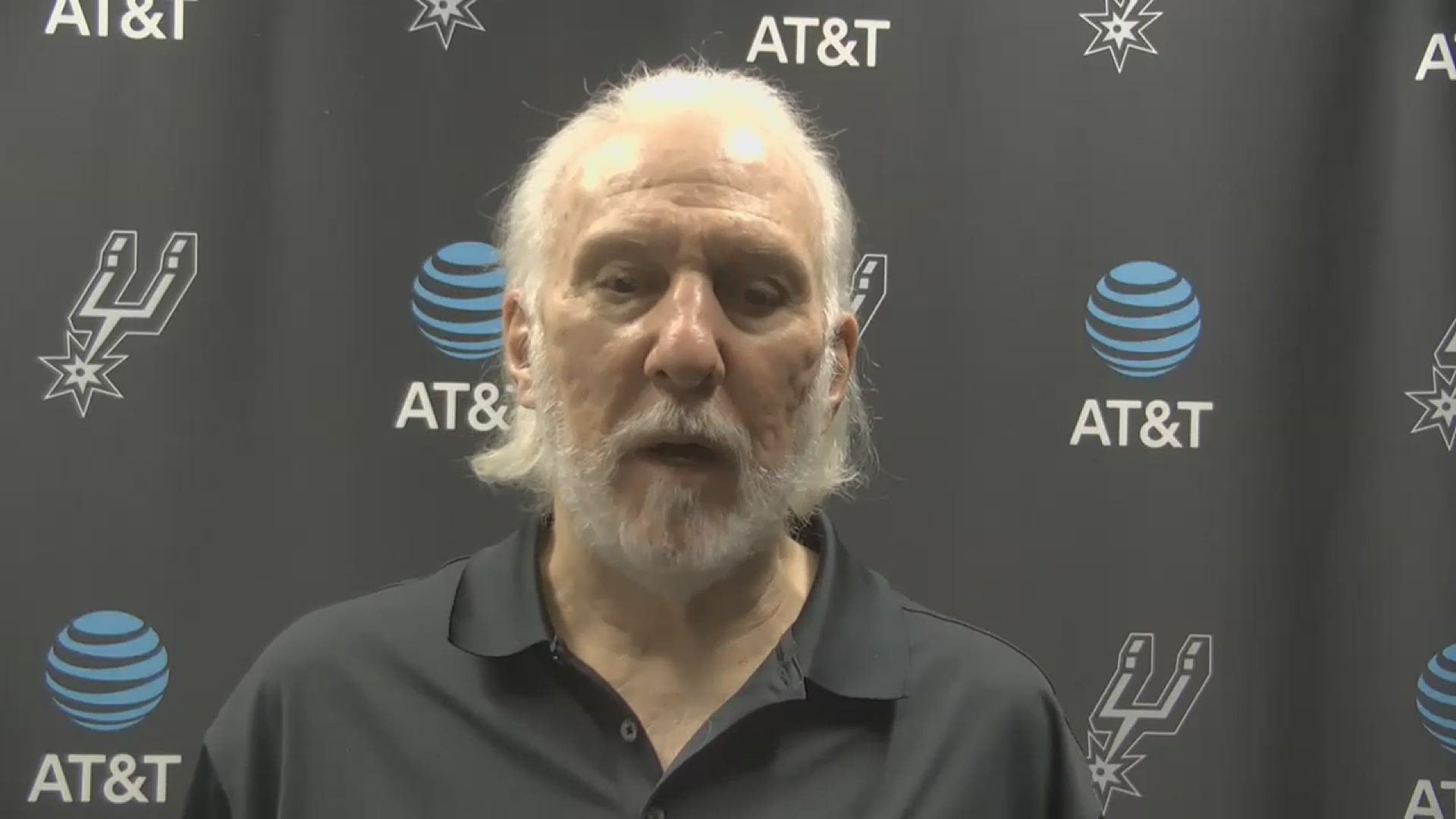 DeMar DeRozan had a bulletproof assessment of his own, saying the Spurs couldn't guard anybody. Nine guys for the Grizzlies scored in double figures, so that statement is as literal as it is figurative. It seems like every game the Spurs let at least one guy get loose, and on this night it was the entire Memphis roster. 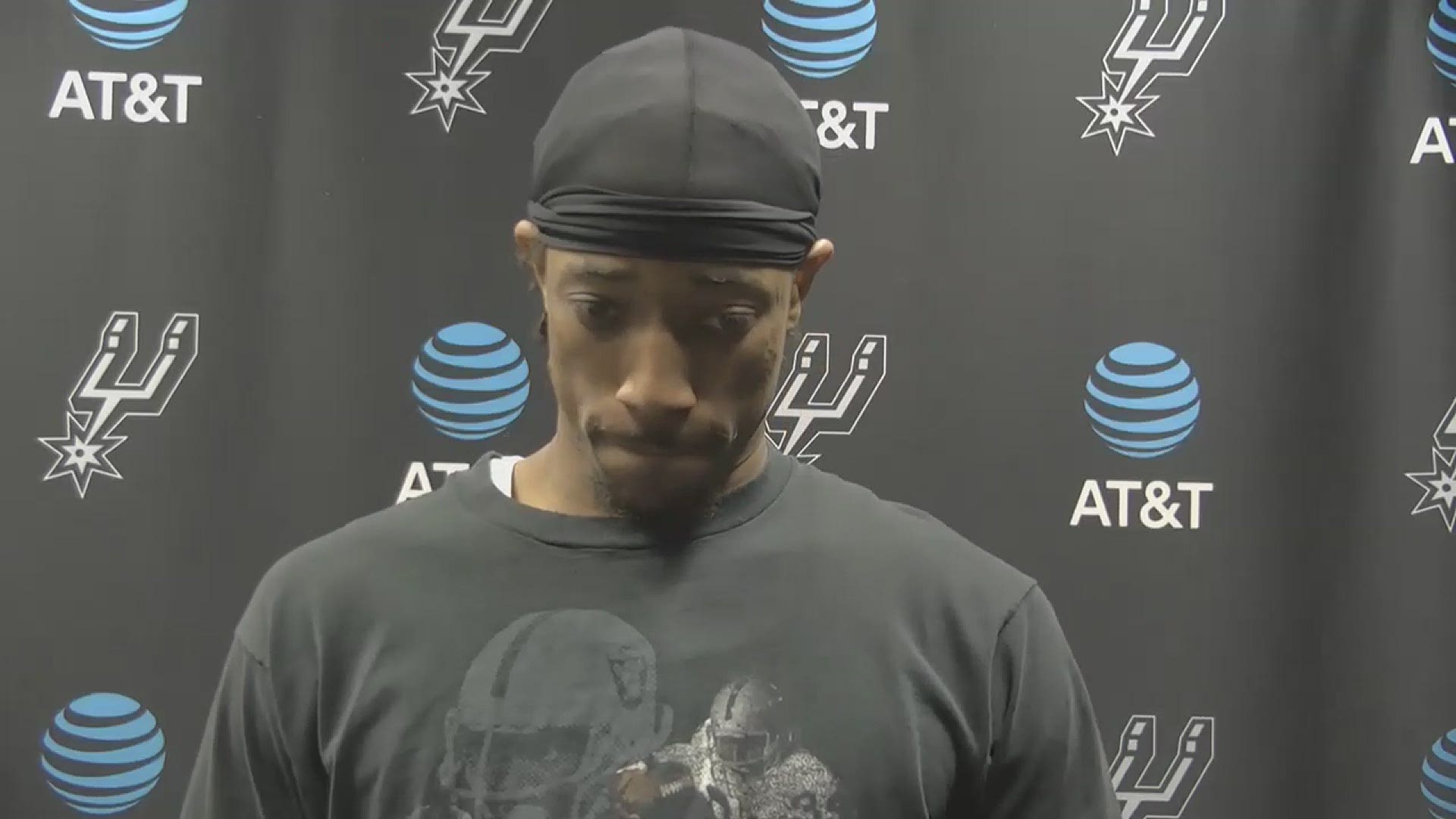 DeRozan added that they couldn't break the Grizzlies' flow offensively, and never got into a rhythm themselves. Part of that was Memphis defense, another part was that the Spurs just looked out of sorts and lackluster for most of this game.

One of the only bright spots was Keldon Johnson, who put up 25 points and 11 boards, but that wasn't the impressive part. It was how he continued to not just battle, but attack even when the Spurs were down 23. There's no quit in him, and as always he reiterated that he only cares about winning and helping the team. 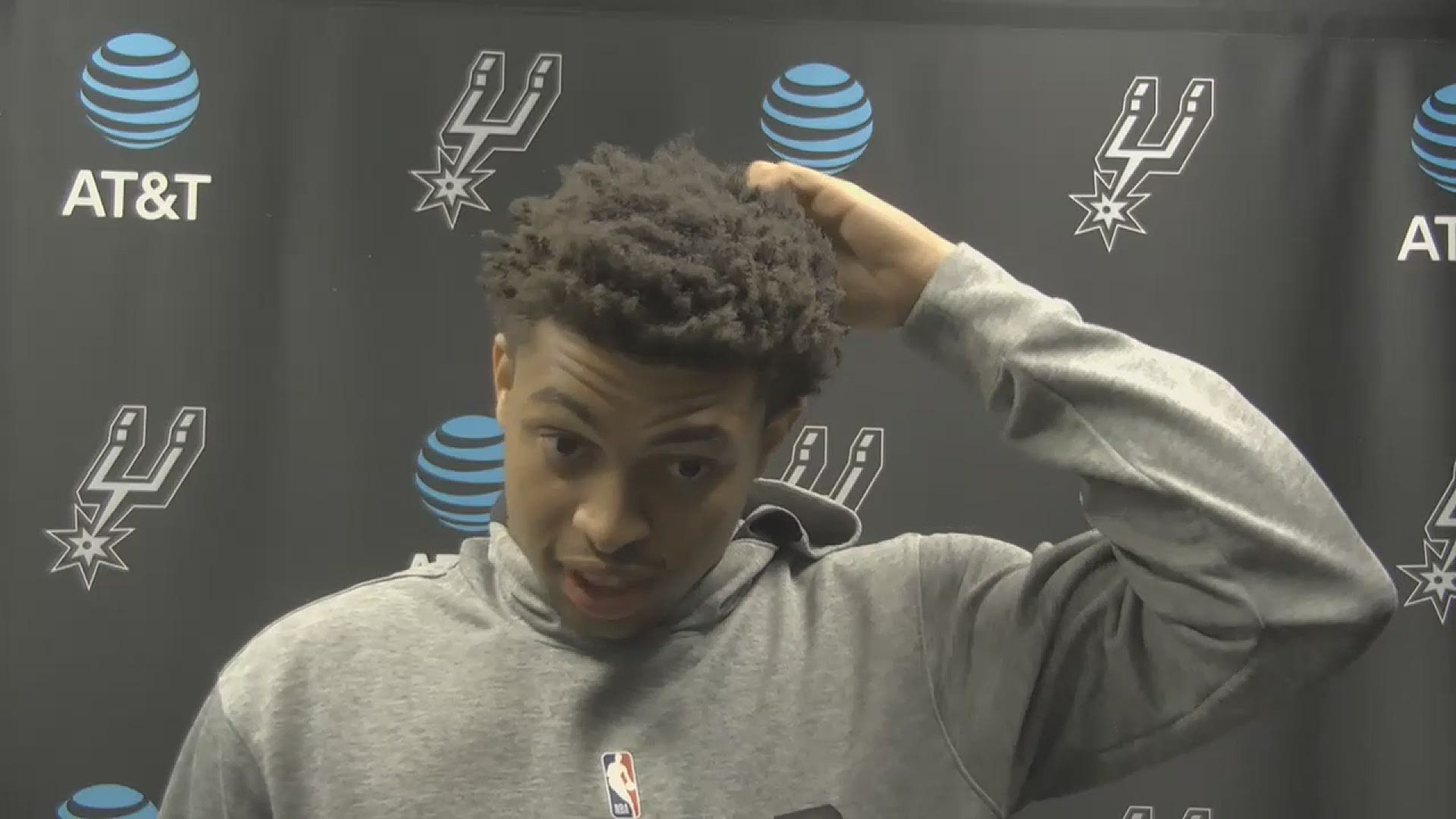 The second-year pro is already a vocal leader in more ways than one. Sure he yells on the court like a gladiator fighting in the arena, but he's also wise beyond his years. After the least competitive two-game stretch of the year and a series of unfortunate butt whoopings, Johnson talked about next steps.

"We know what's ahead of us, we know we have a lot of work to be a good team. These are games we definitely wish we could get, and we needed, but it's gone now, so we've just got to look forward and put our big boy pants on and go out there and get it done next time."

Next time will be against Minnesota on Wednesday.

Memphis kept scoring against an inept-looking defense. Keldon Johnson continued to fight and scrap on both ends, making heady plays and competing.

The rest of the team didn't match his intensity, though, and the Grizzlies built a 106-87 lead. Johnson kept going, hitting a three off a feed from White.

Jakob Poeltl got stranded on a switch against Desmond Bane, but managed to stuff him at the arc. Rudy Gay missed an open three, and Kyle Anderson got another Slo-Mo layup.

Johnson drove and wanted a foul he didn't get, and the other way it went for a De'Anthony Melton three to push it back to 21. As if matters couldn't get worse, an earlier Spurs' three was downgraded to a deuce.

Pop put the deep reserves in with over six minutes to play, effectively pulling the plug. They lost 133-102 on one of their worst nights of the year.

San Antonio's offense remained out of sync, as Memphis opened on a 5-0 run from Brandon Clarke to push the lead to 74-53.

DeRozan drove and found Dejounte Murray for three. He lost the ball and Keldon Johnson found it and passed it back to him for another three, making it 15.

Ja Morant dimed inside, then got a steal, then dimed inside again. He got free throws to make it 80-59. Murray missed his next two triples from the same spot. The Grizzlies went to the zone, and the Spurs seemed to hesitate every time someone caught the ball. They got a vital and-1 from an aggressive Keldon, but that only cut it to 20. He got a few steals and never stopped competing.

Memphis extended the lead again, but he drove for another and-1 to make it 19. Rudy Gay hit a three to make it 86-71, and Memphis called time.

Derrick White kissed a layup in off a nice fake, then after a stop and a second chance he drilled an open three. He fired another and missed, but Keldon stole the board and bullied his way to the line for free throws.

They cut it down to 10 after trailing by as many as 23. Then they gave up three extra chances and a putback dunk, Jakob Poeltl missed his free throws, the Spurs got it back, got it taken from them, and gave up another three to Dieng that made it 15 again.

Jak got a stop in close, and Derrick found Patty on a nice cut. Tyus Jones got another corner three for Memphis, but DeRozan answered with a jumper and Rudy Gay hit a free throw. San Antonio trailed 96-83 with a quarter left.

Ja Morant drove the lane with a dunk in mind, but Jakob Poeltl had other ideas. He stuffed it, and scored in the paint on the other end. On the next trip down, Poeltl scored again through contact.

The Grizzlies got their revenge, scoring repeatedly in the paint.

Patty Mills knocked down his third triple of the game. Play got fairly sloppy for a stretch, and Memphis called time up 41-40. The paint attack continued, with Xavier Tillman dunking Poeltl out of the game and giving Memphis a 47-42 lead.

Aldridge came in and drilled a jumper to stop the bleeding, but Kyle Anderson crammed a crazy two-handed dunk over Derrick White, who never shies away from a defensive challenge.

Lonnie got to the rim twice, but missed both attempts. San Antonio played pretty tough half-court defense, but the Grizzlies built a 63-45 lead thanks to defense that forced turnovers and bad shots leading to transition.

On a rare second chance, Keldon Johnson drove hard and hit the brakes on a pass to Aldridge for a much-needed dunk. DeRozan hit a jumper, then Keldon swatted a shot by Brandon Clarke and finished in transition off a feed from Derrick White.

After another three from Gorgui Dieng, DeRozan got to the basket again. Clarke finished a feed from Morant to give Memphis a 69-53 lead at the break.

LaMarcus Aldridge started the game with one of his best two-way stretches of the year. He hit a pick and pop mid-range jumper, which is normal. Then he blocked Kyle Anderson at the rim, leading to a transition bucket for Lonnie Walker IV.

Aldridge made a pick-and-pop three from Dejounte Murray, then got a steal from Ja Morant in the paint and drilled another three. San Antonio built a 10-3 lead, but it didn't last.

Ja Moran hit a three, and Kyle Anderson drove for an and 1 and another bucket. Brandon Clarke dunked to make it a 10-0 run to take the lead back.

Coach Pop did something a bit strange, putting Patty Mills in for Lonnie for about a play under five minutes into the game, then sending him right back in.

DeMar DeRozan drove and found Keldon Johnson in the corner for three to tie it at 15. Lonnie grabbed a defensive board, took it coast to coast and hit a mid-range jumper.

Keldon, high in the sky pic.twitter.com/UiVNdjsJwW

DeMar made a pass that looked quite the same as the one before, but this time he found Mills in the same corner for three. Then he picked up his dribble on the block, pump faked, and got to the line for free throws, but missed both.

Jakob Poeltl got a block down low, Derrick White got another one and DeRozan got all the way home for a layup. DeRozan and Mills combined for a steal, but Patty's transition layup got smacked off the glass.

DeRozan got back to the line with that little rip-through eurostep that he does, this time hitting both. He took another euro all the way to the rim.

San Antonio's defense continually did things like rotate perfectly for 15 seconds and then inexplicably leave the NBA's leading 3-point shooter in Desmond Bane wide open for three. Memphis shot 5-11 from deep in the period.

DeRozan attacked until the final seconds of the quarter, pulling up from the free throw line for a buzzer beater to make it 33-31 Memphis after a quarter. He finished the period with 8 points and 3 assists, making it already a more productive game than his dud the previous night.

San Antonio is looking to bounce back in a rematch against Memphis, and before the game coach Gregg Popovich spoke about the Grizzlies who pushed them past the Spurs on Saturday night.

Memphis coach Taylor Jenkins started his coaching career as an assistant for the Austin Toros before taking the head job and making the jump to the NBA. Pop seems proud, and knows he has a special point guard in Ja Morant.

"He's obviously one heck of a talent, and he's got great pace, he's unafraid, he sticks his nose in," Popovich said of the second-year stud. "Taylor's done a great job with him as far making him feel confident, and knowing what needs to be done at that position, so his future obviously is very bright."

Pop cracked a big smile and spoke glowingly of another Austin Alum Kyle Anderson, who had 16 points, 5 rebounds and 3 steals in the last one.

"He's such a pure basketball player, he's got his own style, as you say, everybody calls him Slo Mo, but he gets it done," Pop said of Anderson, who spent his first four years in the Spurs' system.

"He executes offensively, does what he's supposed to do, understands his role. On defense he's got good long arms and great hands, he does a good job there, he rebounds. He's just an all around really good basketball player and great teammate, and he's come a long way and made a career for himself."

He spoke about the Austin Spurs system that has developed not just players like Anderson (and every young player on the team currently), but coaches like Jenkins, and Quin Snyder, whose Jazz are atop the West. Blake Ahearn, who coached Austin last year, is now an assistant for Jenkins in Memphis.

Spurs' White a spark in return, but Silver and Black fall to Grizzlies 129-112

Derrick White scored a team-high 18 in his return, but DeMar DeRozan managed only 5 as the Grizzlies shot red-hot against some rough defense by San Antonio.

White said he felt good, and his toe wasn't broken this time so that's a plus, but he was disappointed the Spurs couldn't pull off the win.

When asked what he saw on that end that caused the struggles tonight, coach Gregg Popovich summed it up without getting into details.

"I'm not gonna do a clinic for you, we got outplayed," he said.

Lonnie Walker IV got a bit more specific, saying that the Grizzlies hit floaters and corner threes on the weak side. He also said that everyone needs to play harder and better individually.