FINAL: Spurs fall 109-105 to a shorthanded but motivated Houston Rockets 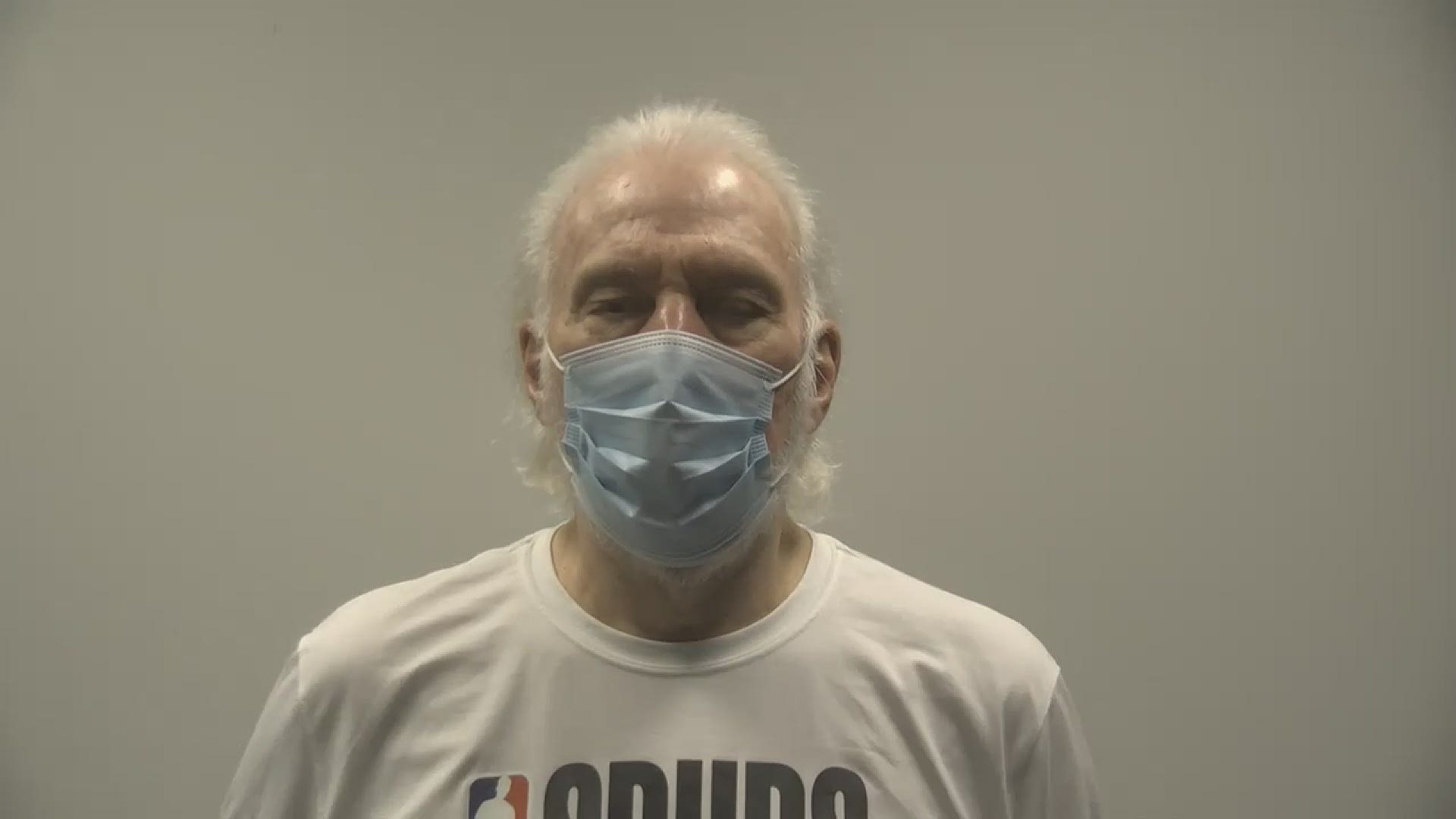 SAN ANTONIO — "It's got nothing to do with defense, offense, it has to do with between the ears, being ready to play," Spurs coach Gregg Popovich said after a disappointing loss to a shorthanded but highly-motivated Houston Rockets, wasting a career-high 29 points from Keldon Johnson.

"We had four or five guys who were out to lunch."

James Harden's last public act as a Rocket was saying that the team wasn't good enough, and they played like they wanted to prove him wrong in a nationally-televised game, scrapping for a 109-105 win. Pop said before the game that he expected them to come out with something to prove, and when asked after the game if that wound up going like he expected, he answered with one word in the affirmative. 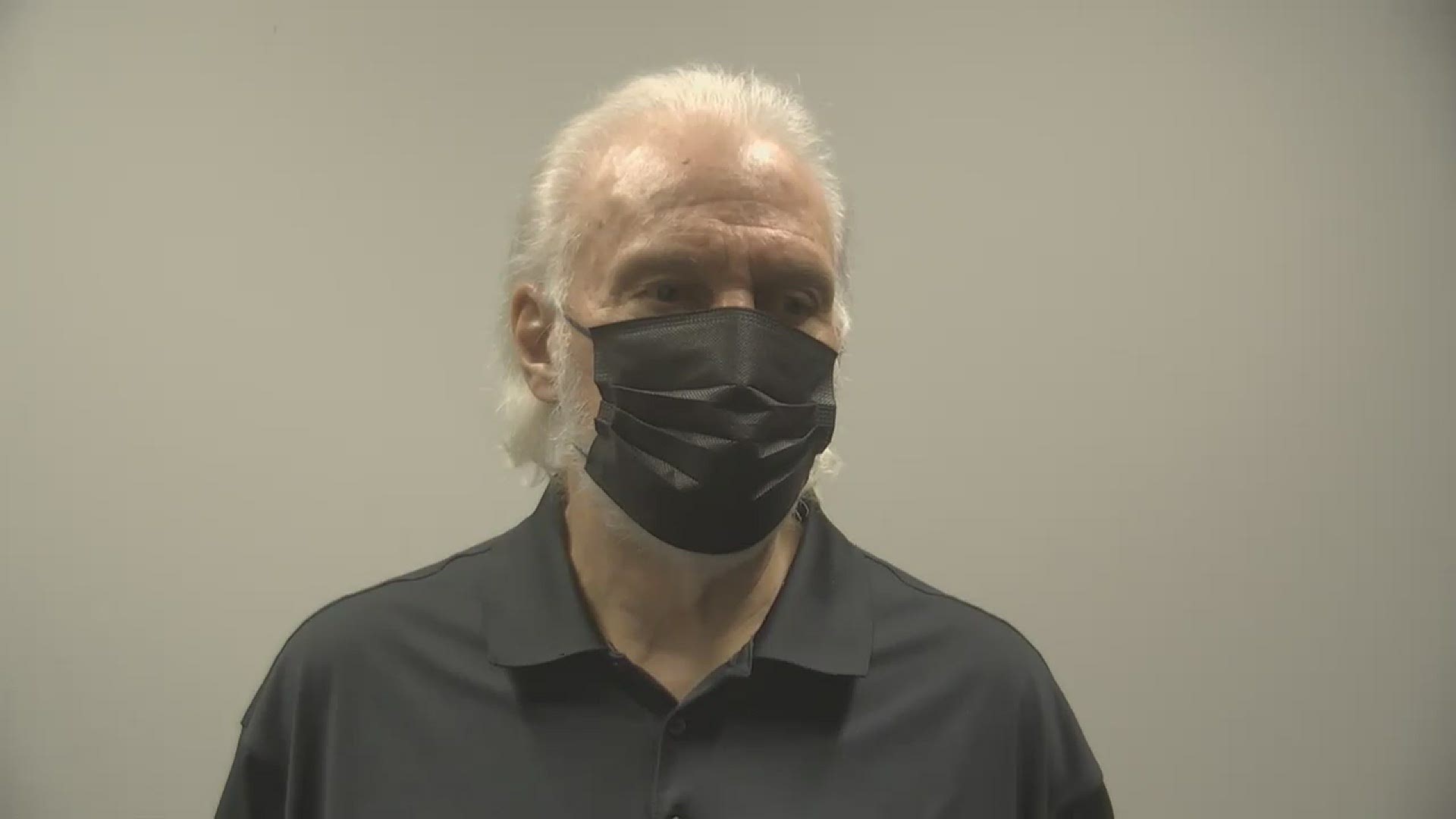 "They had something to prove," Lonnie Walker IV said. "They felt disrespected. That energy and animosity was built up inside of them. They were definitely ready to play this game.”

As far as where specifically things went wrong for San Antonio, they didn't get enough production from their vets. DeMar DeRozan, LaMarcus Aldridge, Rudy Gay and Patty Mills shot a combined 14-41 from the floor and 2-16 from deep.

DeRozan missed the previous two games to tend to his ill father, making his early struggles equal parts understandable and irrelevant in the grand scheme of things. He hit a series of big shots in the fourth quarter, and got to his spot at the buzzer with a chance to tie and an open shot only to have it hug the rim and fall out.

Aldridge's two-way struggles on continued, as he managed just 11 points and 2 boards while Christian Wood went off for 27 points, 15 rebounds and 3 blocks.

Patty Mills started the season red hot from all areas of the floor, but his regression to the mean has been swift and unforgiving. He shot just 1-7 from deep in this game, making him 7-30 (23%) in his last three. Pop left him in in the fourth quarter, even after Lonnie hit his third and fourth threes of the game in the second half.

Patty helped push San Antonio's lead to 99-90, but Houston closed the game on a 19-6 run in the final five minutes with Walker and his defense on the bench. He said he was not hindered by an injury to his left hand, and was ready to go out there. 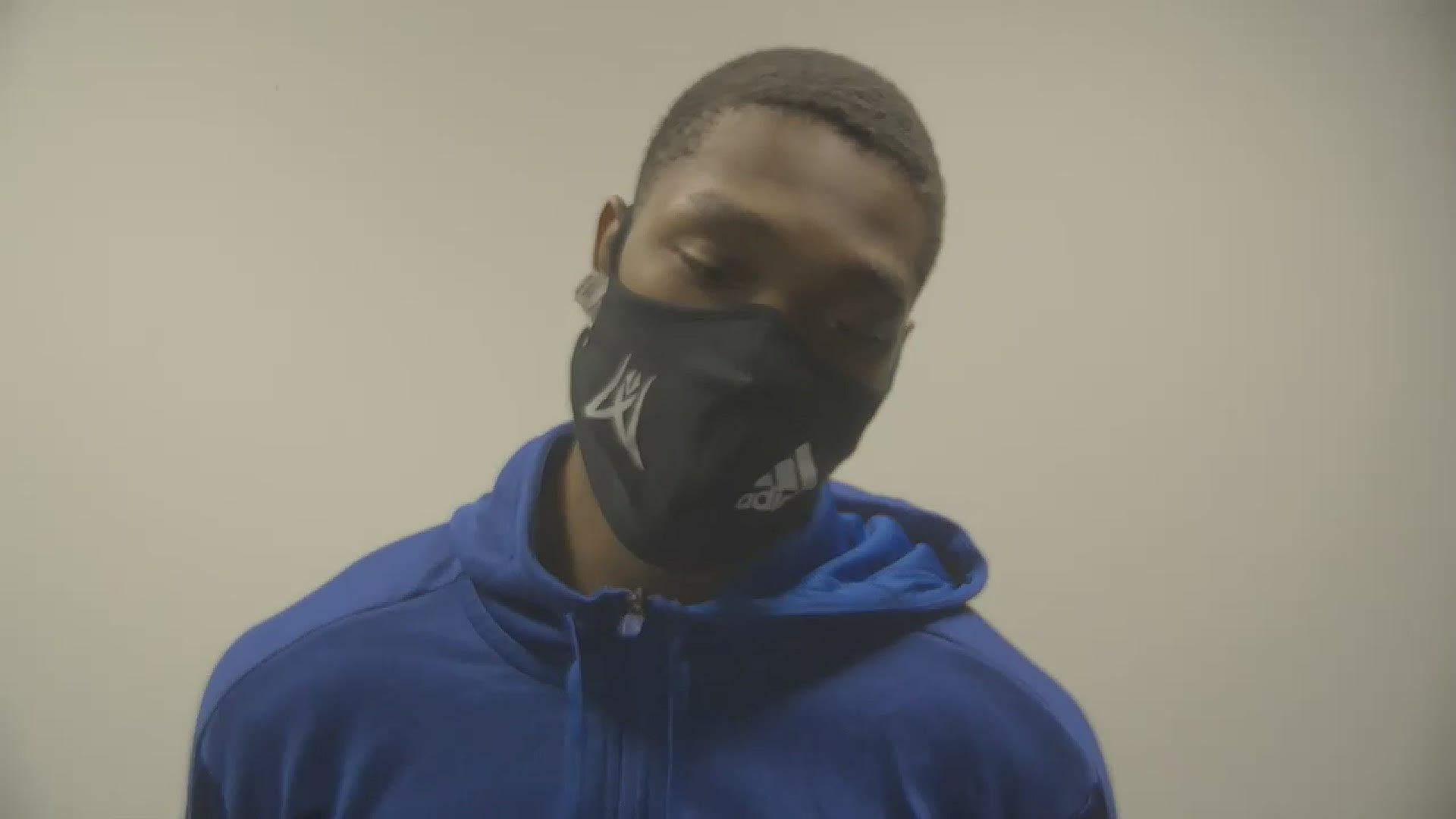 Walker had 8 points in each half and played 25 minutes, with the Spurs outscoring the Rockets by a team-high 8 points when he was on the floor. In the 27 minutes Mills was on the floor, Houston outscored San Antonio by 14.

Jakob Poeltl's troublingly soft play continued, as he couldn't swing the battle on the boards in San Antonio's favor and he again turned down several opportunities to dunk, leaving points on the board.

Lonnie's solid game and confusing benching was part of a great night for the young core that was unfortunately wasted. Keldon Johnson scored a career-high 29 points on 12-16 shooting, while Dejounte Murray finished with 10 points, 8 boards, 7 assists and 5 steals and rookie Devin Vassell tied his career high with 12 points and 3 steals. When San Antonio got going in transition they were as dangerous as ever, but it wasn't enough as the team struggled to hit shots. 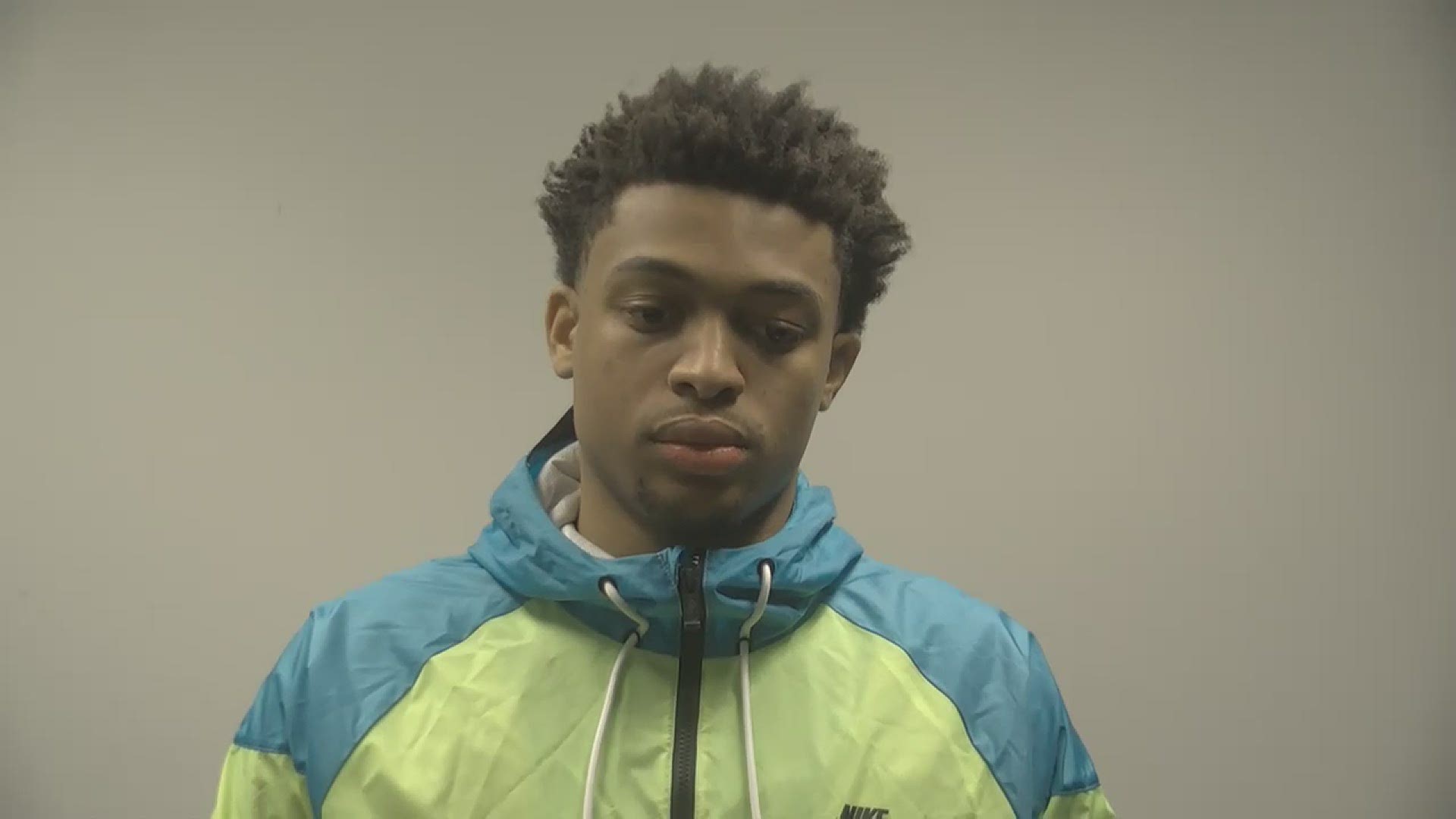 The only Spurs to shoot better than 50% were Johnson at 12-16 and Vassell at 4-6. Everyone else shot 37%, and not too many of those looks were forced.

It's a frustrating loss for the Silver and Black any way you slice it. Even though some of the struggles were understandable, even though much like the Timberwolves games the bad team put up a good fight on a night when they clearly wanted it more, San Antonio should have found a way to close this game out.

Houston came in with nine focused, angry, determined NBA players. San Antonio had about half that with no good excuse, and they almost got away with it too. Not that Pop needs an excuse to coach his team hard, but you can bet that nobody will be out to lunch for the film session. Whether that carries over to the rematch on Saturday remains to be seen.

Dejounte Murray started the game by using his reach to poke free a steal, finishing with a layup on a one-man break. Lonnie Walker IV and Keldon Johnson each attacked the basket for layups as well, and the Spurs generated six shots at the rim and four from three in the first few minutes.

The problem for San Antonio, one they've run into before this year, is those good shots didn't fall. They missed seven in a row, and Houston ripped off a 10-0 run to take a 14-6 lead.

Aldridge hit a three to stop the bleeding, but Christian Wood answered with his second triple of the game. Johnson hit a rare mid-range shot, and Wood answered again with a putback.

DeRozan got his first bucket on a crafty reverse with English for an and-1 in his first action since missing two games.

DeMar at his magical best:pic.twitter.com/vezQOaco9E

San Antonio's bench unit came in, and after a Rudy Gay putback and two Patty Mills layups on nice passes from both Jakob Poeltl and Dejounte, the Rockets called time with the lead at 23-20.

Devin Vassell knocked down a triple, then ran the floor in transition and finished a feed from Mills with a forceful two-handed jam. Every Spur scored in the first quarter except for Jakob Poeltl, whose troubling start to the year on offense continues.

San Antonio shot just 2-9 from deep in the first quarter, but had 11 assists to just 2 turnovers. They trailed 30-27 after a quarter.

The problem of guarding Christian Wood persisted as he hit his third triple in as many tries, then finished a difficult leaning shot inside.

San Antonio continued to get out in transition and get the shots they want, but they continued to miss. Walker bucked that trend when he knocked down two threes in quick succession to cut Houston's lead to 44-39.

Vassell hit a jumper and the free throw after getting fouled, giving him eight points in the half. San Antonio got another possession just like that from Rudy Gay.

Dejounte and LaMarcus ran pick and pop to get a wide-open three, but missed, falling into that established pattern of creating good shots and just missing.

After a stop DeMar posted up and found a cutting Keldon who finished with a soft dunk or two-hand overhand layup through contact. He missed the free throw to tie, but DJ got to the rim for the Spurs first lead since 6-4. He hit a turnaround jumper to push it to 48-51, forcing a timeout from Houston.

Walker knocked down a three, then Murray ripped a steal and found Lonnie, who turned on the jets and whipped a pass to Johnson for another layup. On the next possession Walker found Johnson again, and this time he took two dribbles and threw down as if the rim had insulted his family.

Walker hit another three, then a transition dunk as the Spurs continued to force Houston to turn it over. Johnson got free throws, then finished an alley-oop jam from DeMar on another fast break, pushing the lead to 69-61.

Johnson added a three after his all-out assault on the rim.

Houston did more than just keep things interesting though, as they continued to hit shots and tied the game at 72. Patty drilled a bail-out three and Murray hit a tough shot in close, and then another.

San Antonio carried a 79-75 lead into the fourth quarter.

The back and forth affair continued, but DeMar DeRozan finally came alive, hitting three mid-range jumpers in a row. Devin Vassell attacked the rim and got up to 12 points, tying a career high.

The Rockets showed an impressive level of sticktoitiveness, answering with threes to cut it to 99-96. Aldridge shook off some rust in the fourth as well, hitting a few jumpers.

Christian Wood blocked an attempt by Murray at the rim, right on the border of goaltending, and after good transition defense to start, Wood got an open three to tie it at 101. Then he drew a foul on Aldridge, and he hit the free throws to give Houston a lead with two minutes left. Aldridge missed a three, and Sterling Brown hit another tough shot at the rim to stretch the lead to four with just under two minutes to play.

Johnson and DeRozan each finished physical shots inside, and San Antonio forced a turnover. DeRozan got to the rim again and wanted a foul, but didn't get it.

With the shot clock off, DeRozan got to his spot with a chance to tie, and the shot rolled around a majority of the rim before harmlessly falling out.

The vets didn't have it tonight, wasted a great game from Keldon, Lonnie, Dejounte, Devin.

Credit to the Rockets though.

Houston's James Harden problem came to a head this week as he called the team "not good enough" and said he didn't think the situation could be fixed. He said that after two losses to the defending-champion Lakers, or alternatively, before a two-game set against the upstart Spurs.

With Harden gone, injuries to John Wall and Eric Gordon and new Rocket Victor Oladipo not yet with the team, Houston will trot out a starting lineup of Ben McLemore, Sterling Brown, Jae'Sean Tate, P.J. Tucker, and Christian Wood.

If you expected Gregg Popovich to have some sort of reaction to the Harden news, prepare to be disappointed.

"None of my concern," said Popovich, who has said over and over again that he focuses on what his team does.

This is a game where San Antonio should take care of business, especially considering how well they've played in the early going. Rudy Gay said he was grateful for the road trip and through a tough early schedule, because through that test they proved that they can compete with the best teams in the league. 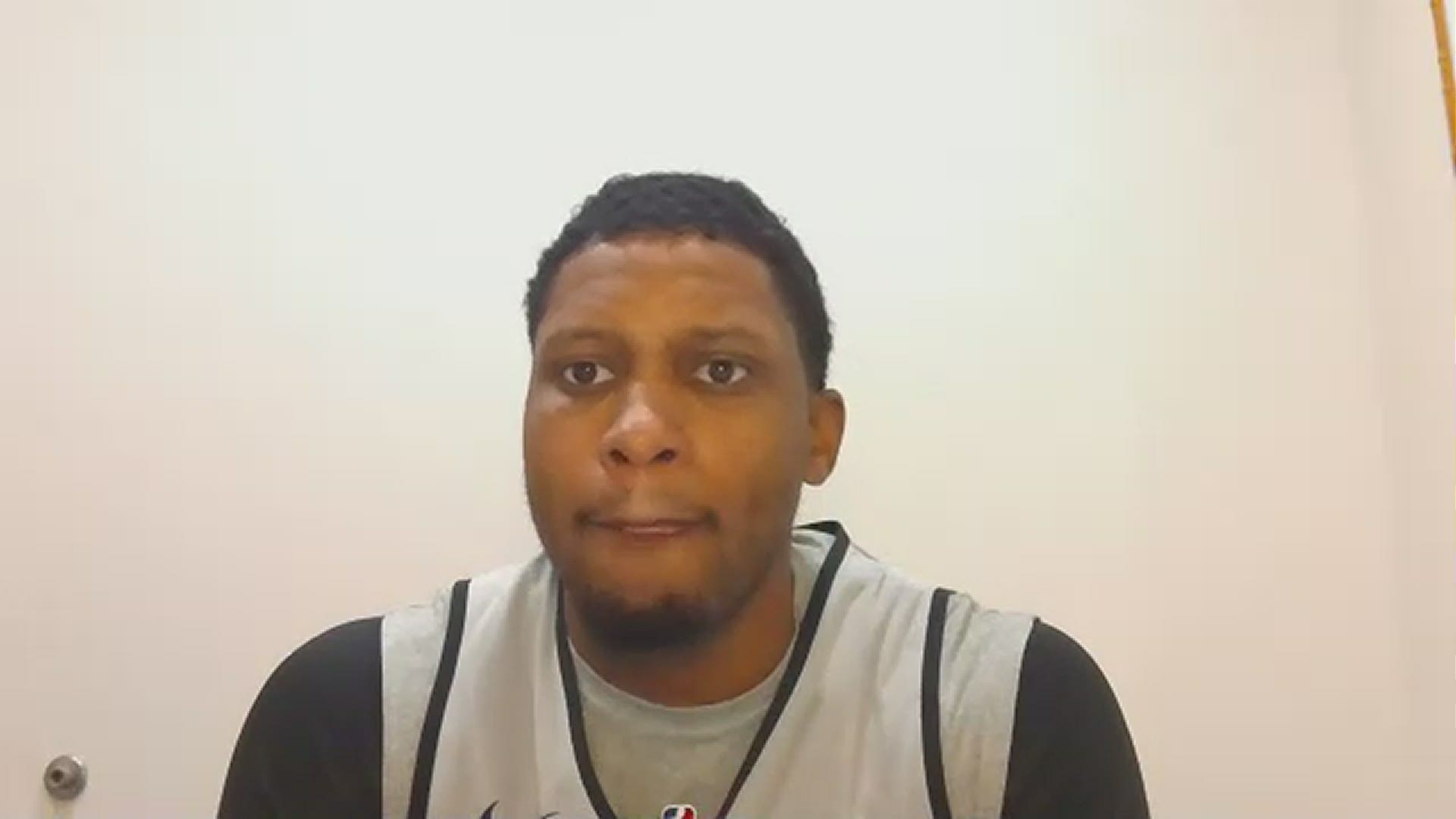 Rookie Devin Vassell spoke about the road trip as an opportunity to bond with teammates, even though things are different because of coronavirus. It was the first long NBA road trip of his young career, and he was happy to be back in his new home in San Antonio. 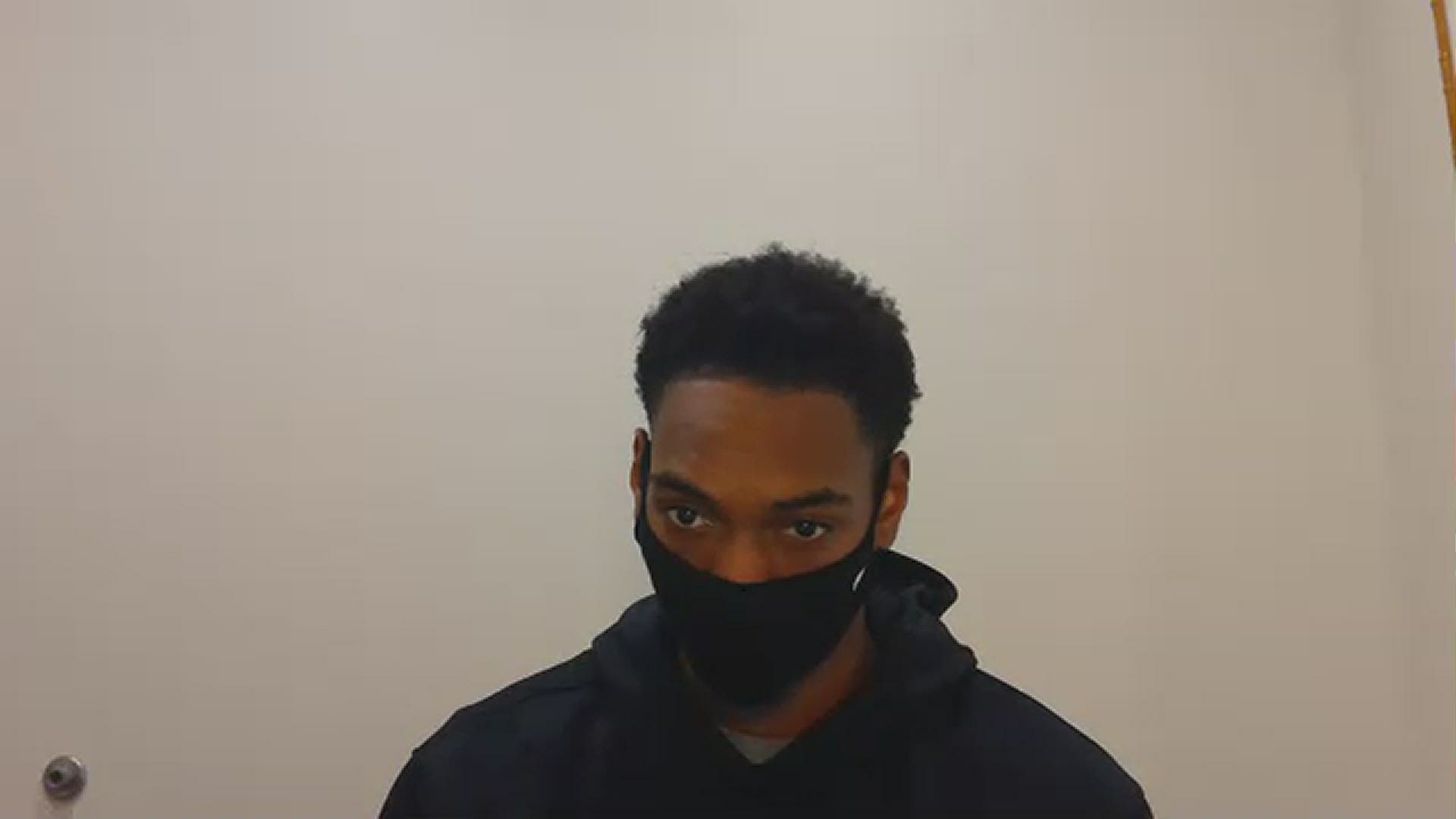 There Spurs will have star player DeMar DeRozan back in the lineup tonight versus the Houston Rockets, who just parted ways with their franchise piece.

James Harden was dealt to the Brooklyn Nets in a blockbuster trade made Wednesday afternoon. In return, Houston will get Dante Exum, Rodions Kurucs, and four first-round picks, as well as Victor Oladipo.

In his last media appearance for the Rockets, Harden didn't mince words, stating the team is "just not good enough."

"This situation is crazy. It's something that... I don't think can be fixed, so, yeah, thanks," Harden said before abruptly leaving the room.

San Antonio struggled to shoot for much of the final game of their road trip in OKC, but they took care of the ball, took advantage of turnovers, and found clutch shots late to win 112-102 behind 24 from Lonnie Walker IV.

"It was a great win, 4-1 on the road trip, a few guys missing, and they dug down deep and played a really good team. There's no stars on that team, but they do a good job," Spurs coach Gregg Popovich said. "You had to work and grind it out, especially on the last game of a road trip, so I was really proud of them." (Continue reading here.)