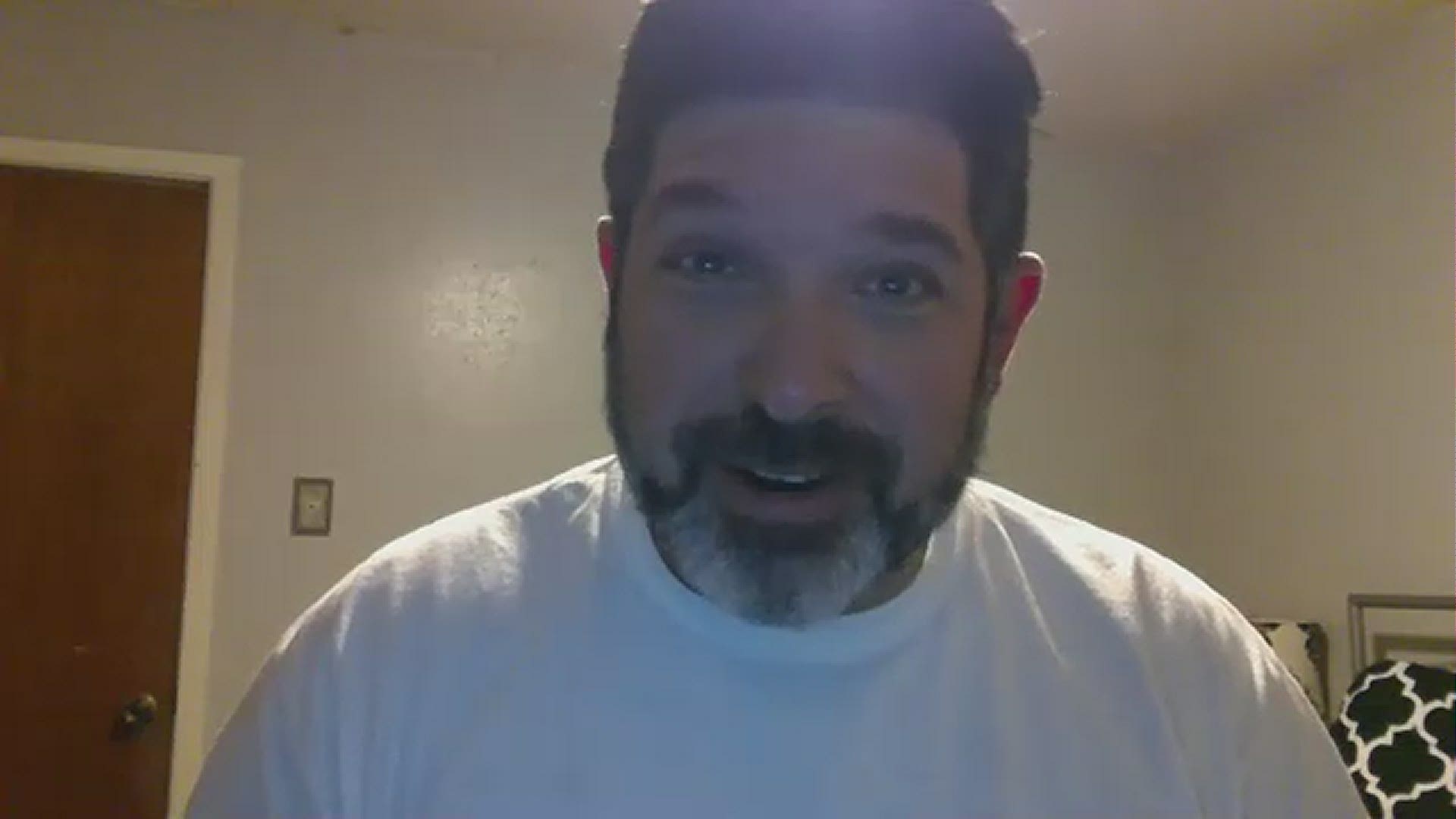 SAN ANTONIO — San Antonio struggled to shoot for much of the final game of their road trip in OKC, but they took care of the ball, took advantage of turnovers, and found clutch shots late to win 112-102 behind 24 from Lonnie Walker IV.

"It was a great win, 4-1 on the road trip, a few guys missing, and they dug down deep and played a really good team. There's no stars on that team, but they do a good job," Spurs coach Gregg Popovich said. "You had to work and grind it out, especially on the last game of a road trip, so I was really proud of them."

One player Popovich was particularly proud of was Dejounte Murray, who started slow along with the rest of the team before scoring 10 fourth quarter points and running the offense as the primary ballhandler with DeMar DeRozan out.

"We ran one play maybe ten, twelve times in the second half, and he made a different read every time, and it was almost always the right read, so he really managed the floor well," Popovich said about the high screen and roll that San Antonio found success with late.

"I'm growing, I know I'm growing, but I have a long way to go," Murray said. He said again that his ability to read the game in that pick and roll improved through work with Becky Hammon and the rest of the coaching staff. 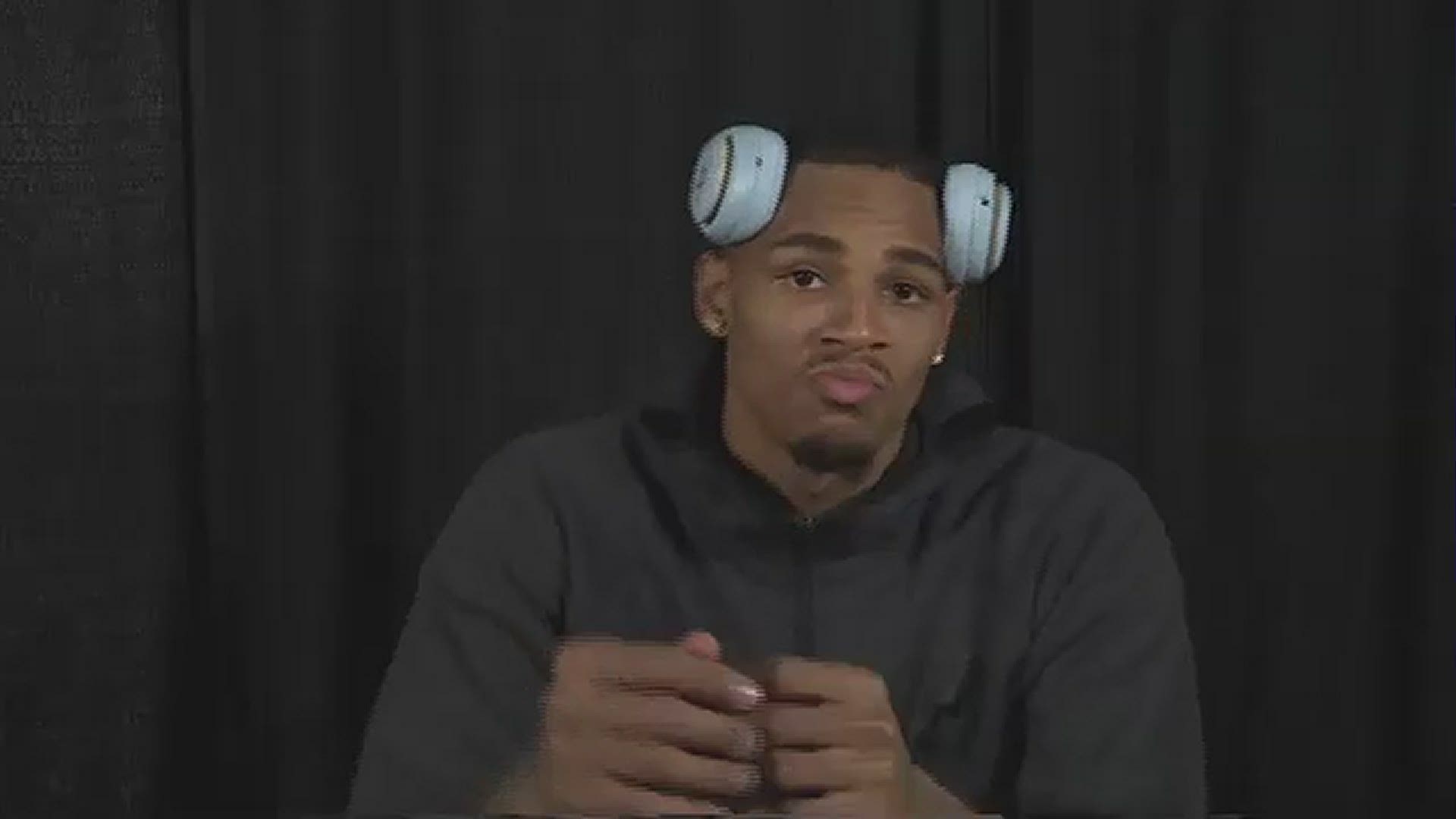 San Antonio turned it over just four times, and turned 13 OKC turnovers into 26 points. Winning that battle won the game for them, and Keldon Johnson said the low turnovers start with Dejounte setting the pace, getting everyone in the right spot, and running the offense well. 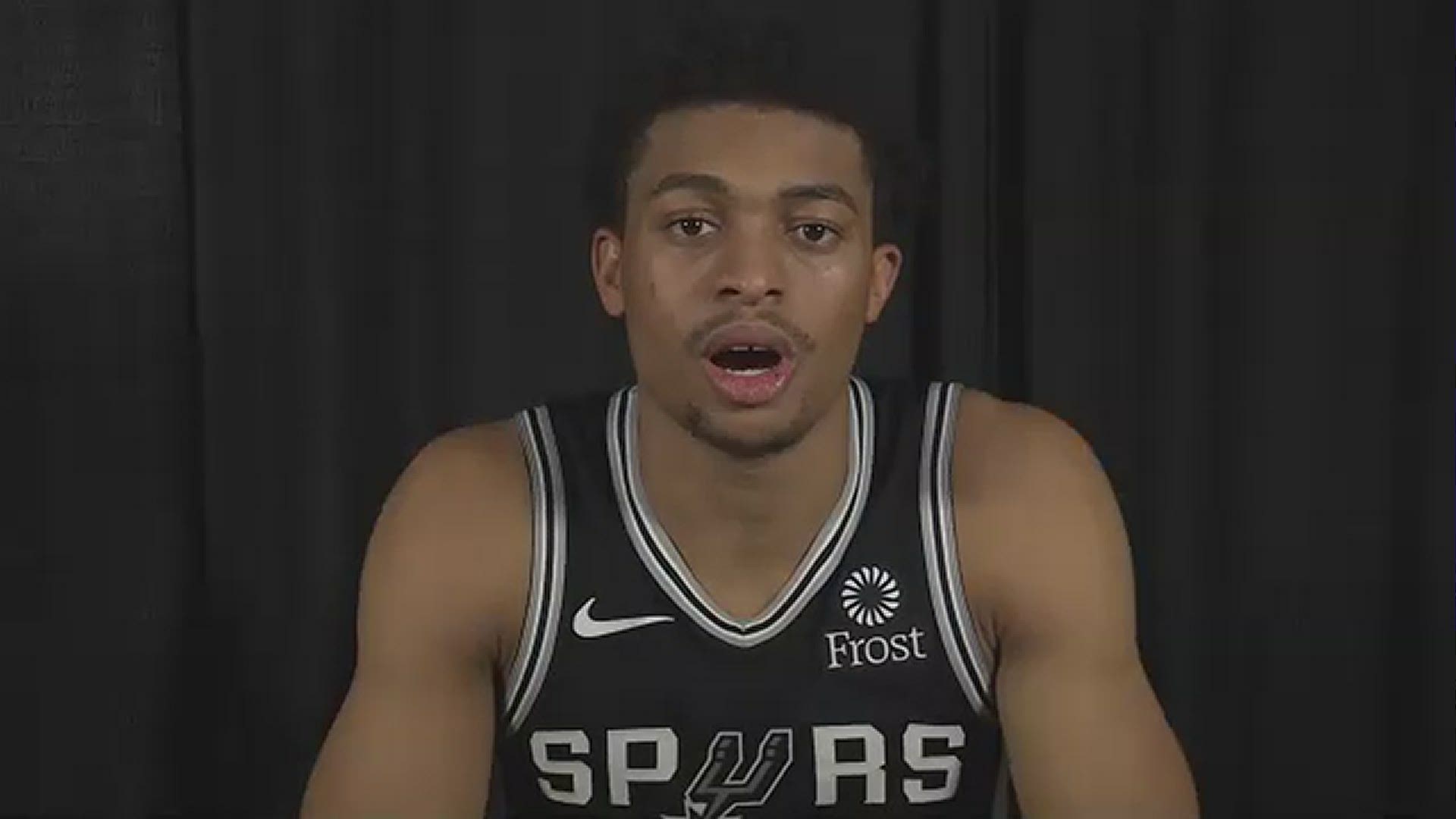 Lonnie Walker IV led the team in scoring for the second night in a row with DeRozan out, and Coach Pop spoke about how he and the rest of the coaches are staying on him and demanding an attacking mindset out of him.

"We're all saying the same thing to him, we're trying to make it a habit, that aggressiveness, take no prisoners, let the game come to you, but understand that every cut, every pick, every rebound, snatch it, every miss run the floor, attack the rim, find a teammate, he's learning that all that stuff adds up," Popvich said.

Walker said he knew he had to play a bigger role.

"I'm such an unselfish player that sometimes it gets the best of me, but these past two games with DeMar not being here at the time, I knew that there was a time for me to step up and take that role and be more aggressive." 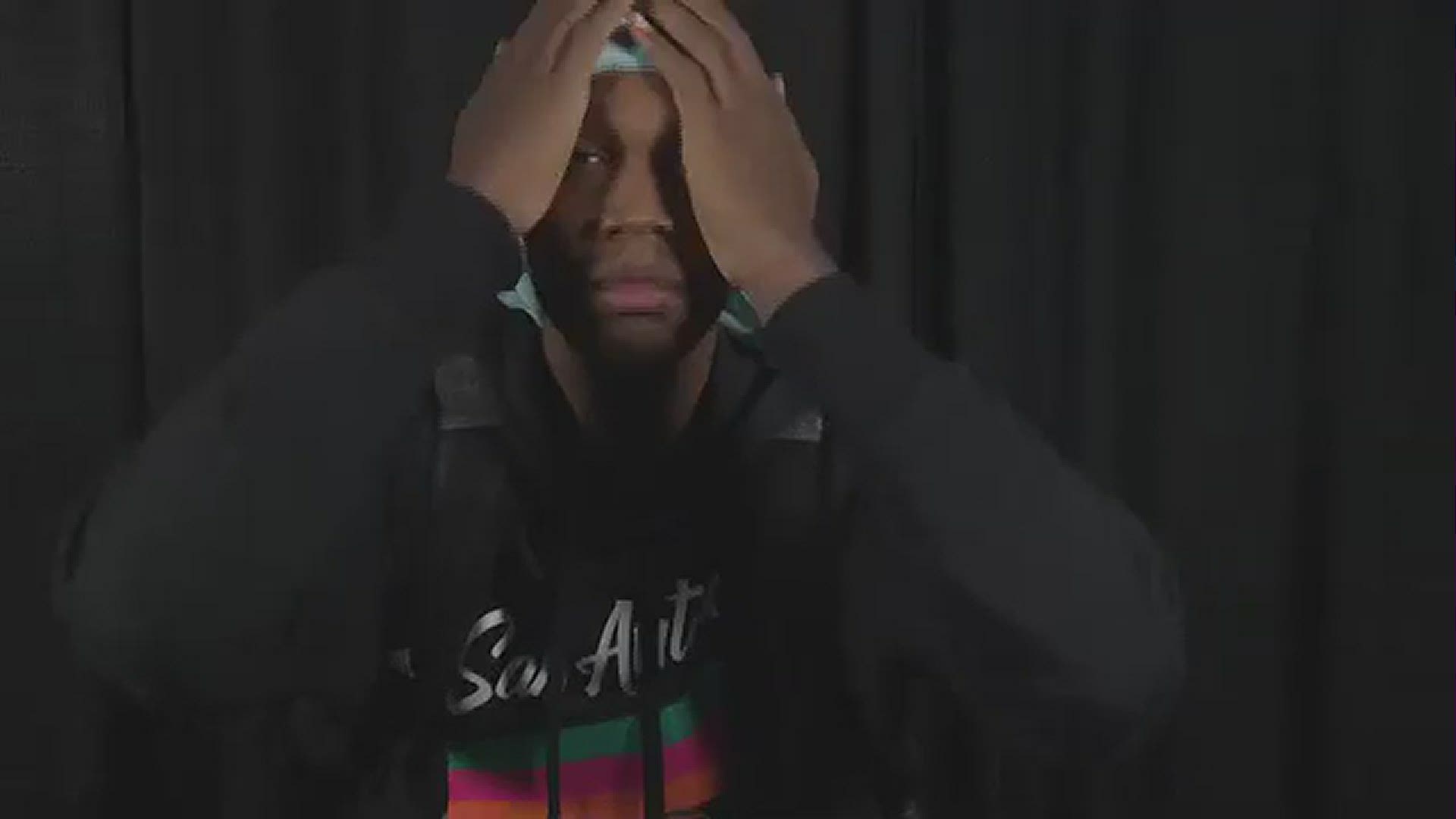 San Antonio also got double-digit scoring from all three veterans, giving them six in double figures on the night. The well-rounded team effort pushed San Antonio to 6-5 after finishing the road trip 4-1. On this trip the Spurs proved they can beat the best, take care of business against less dominant teams, and play their style against anybody. It wasn't perfect, but they have overperformed to this point in the season and they're only improving.

The Thunder opened the game by breaking down San Antonio's defense repeatedly, finding open threes on the weak perimeter rotations that resulted as OKC jumped out to an 8-3 lead.

Most of San Antonio's offense came out of running pick-and-pop around LaMarcus Aldridge.

The Spurs tightened up on defense with Keldon Johnson forcing two turnovers under the basket, then scoring a tough and-1 to tie the game at 8.

OKC kept getting right to the cup, and got out to a 20-13 lead. Aldridge knocked down a three, but Dejounte Murray and Trey Lyles each missed their first three shots.

For Lyles, it looked like he was fading or otherwise making his shots more difficult than they needed to be. Murray got to his spots, including right to the basket, and simply missed. Jumpers from veterans Patty Mills and Rudy Gay helped the Spurs close the gap.

Spurs get back in this one thanks to Patty’s steady shooting pic.twitter.com/j5V8fBLziS

Gay threw a pass that got tipped out to Mills, who drained a three. on the next possession, Walker got to the basket to tie it at 24.

It was all knotted up at 26 after a quarter, with Mills and Walker tied for the team lead at 7 points.

Keldon Johnson continued his season-long campaign of driving through anyone between him and the rim, and Devin Vassell got fouled on a scary-powerful dunk attempt.

These young boys can get out and run 💨 pic.twitter.com/ajpR5tsY3N

Overall, both teams shot poorly on good looks to start the game. The answer came in the form of Johnson's relentless attack of the basket, and Dejounte Murray hitting an open shot after a cold start and finding Jakob Poeltl for a floater.

San Antonio gave up just 10 points in the first seven minutes of the period, denying easy opportunities at the rim and watching the Thunder shoot poorly from outside.

Then they ripped off an 11-2 run toward the end of the quarter, with Walker stepping up as a scorer and defender en route to San Antonio opening up a ten-point lead.

This is a more advanced handle than Lonnie showed last yearpic.twitter.com/zZ3ew02vJU

San Antonio led 51-43 at halftime, but not because they shot well. They were just 41% from the floor and 4-17 from three, but they took care of the ball and forced the Thunder to shoot worse and cough it up six times, leading to 11 Spurs points.

Spurs up 51-43 at halftime despite poor shooting

Oklahoma City opened the quarter on an 11-3 run, taking advantage of a cold 1-5 start for San Antonio and tying the game at 54. Dejounte Murray seemed to let the frustration get to him, getting called for a technical foul after driving, missing, and looking for a foul call that never came. Murray recovered, attacking in pick and roll and finishing a tough layup.

Dejounte with the moves and tough finish 👀pic.twitter.com/xbRpWmTMNt

Lyles got a layup in transition off a feed from Lonnie, then knocked down a catch-and-shoot three.

It’s all about defense and transition for San Antonio pic.twitter.com/COech8LHyt

Dejounte got to an in-between spot he likes and drained the shot. Rudy Gay knocked down a difficult three off the bounce, then an easier look off a clean catch. Keldon continued to knife his way to the rim, finishing the third with a game-high 17 points.

If you let Keldon get downhill, you’re gonna have a bad timepic.twitter.com/bbuV6nqLcu

San Antonio broke the defense down using a very effective high screen and roll, and the Spurs held an 80-73 lead with 12 minutes left.

Patty opened the fourth on a mission, attacking the defense with screens from Poeltl. Once Mills loses his man with the pick, he can use his high-level speed and shooting to attack the opposing big in a variety of ways.

Can’t give Patty an inch of space, and he had several feet here pic.twitter.com/DfUahYOfDq

He crossed over and pulled up from mid-range, then found Poeltl on the roll for what could have been a dunk but turned into a block. Mills then came off a screen without the ball and knocked down a triple, pushing San Antonio's lead to 10.

The Thunder stormed back with a 6-0 run of their own, and they had a chance to make it 8-0 but Vassell busted up a transition break. After a timeout and a tough offensive possession, Murray isolated, lost his defender with a mean crossover and hit the shot.

Lonnie then attacked the rim, hit a shot through contact, screamed like a banshee and hit the free throw. San Antonio lost the ball for a moment, but LaMarcus Aldridge was able to bat the ball to Walker, who knocked down a three.

Aldridge then made a mid-range j, but OKC kept it within reach.

The Dejounte/LaMarcus pick and pop has been money for years pic.twitter.com/TWZBA2IbOl

Walker attacked the rim again and got to the line, giving him 22 and forcing a Thunder timeout with 5:01 left and the Spurs up 98-90. The Thunder managed to cut it to 104-100, but a timely basket for Mills pushed the lead back to 6. Mills found Walker for a triple that missed, but Keldon Johnson used his big body to get the board and hit his free throws.

Dejounte Murray picked a bad time for his first turnover of the game in the backcourt up six, but the Spurs dodged a bullet on the open triple that resulted.

San Antonio won 112-102 behind a solid team effort, finishing the road trip 4-1 and pushing their overall record to 6-5.

This is the final tilt of San Antonio's five-game road trip, and if they take care of business against Oklahoma City they'll finish it 4-1 and push their overall record to 6-5.

They beat the Clippers and Lakers, then outlasted a motivated Timberwolves squad in overtime behind 38 points from DeMar DeRozan. He missed the next game and is away from the team due to an illness in the family, and the Spurs couldn't close.

Before the game, Popovich said that DeRozan was in a tough situation with his father, but could fly back to San Antonio tomorrow. When he can re-join the team and play again depends on the league's health and safety protocols. 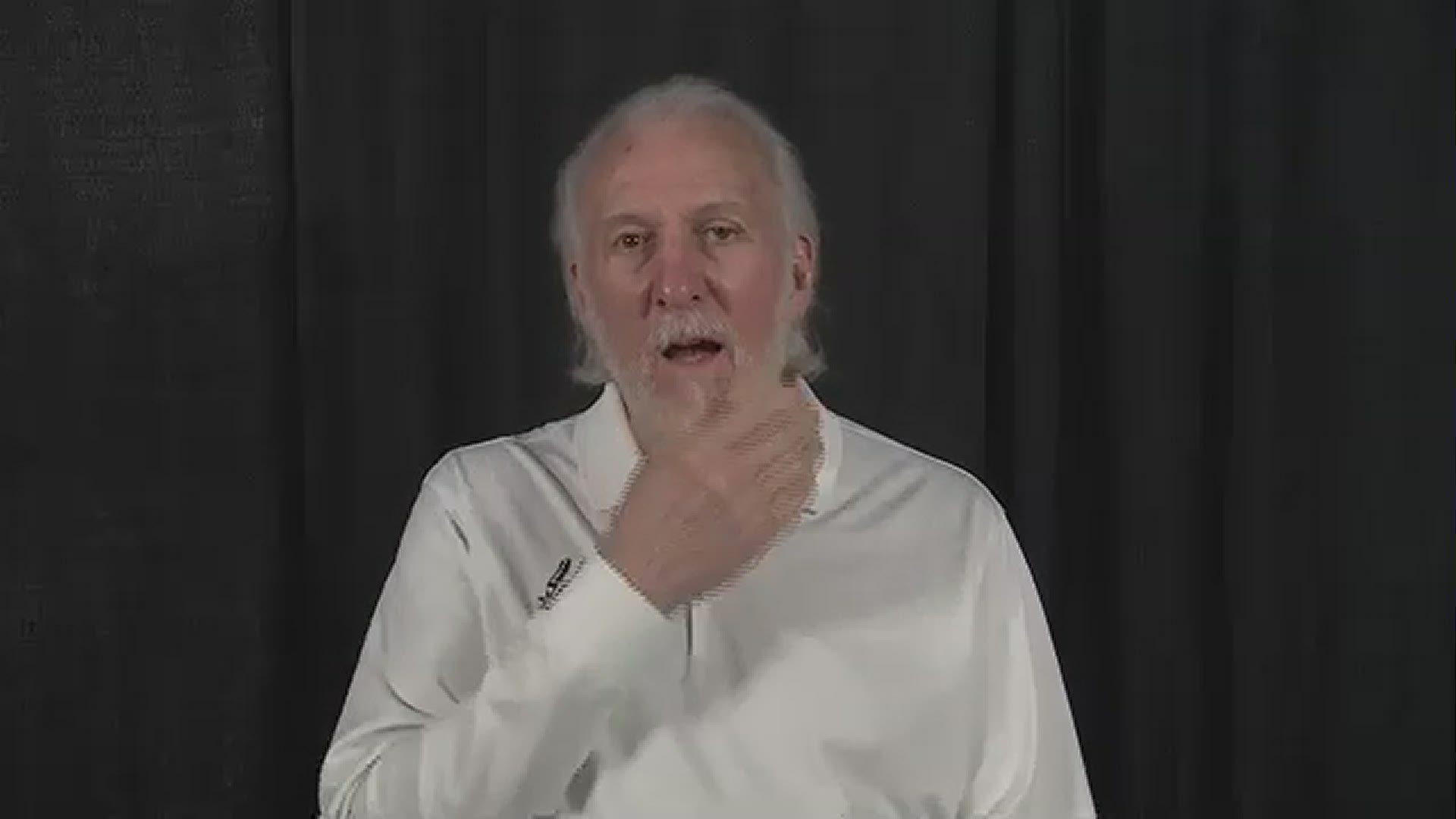 At shootaround in OKC, center Jakob Poeltl spoke about how the Spurs missed DeRozan and his innate ability to get a bucket, but that it was a good opportunity for Lonnie Walker IV and other players to step up. 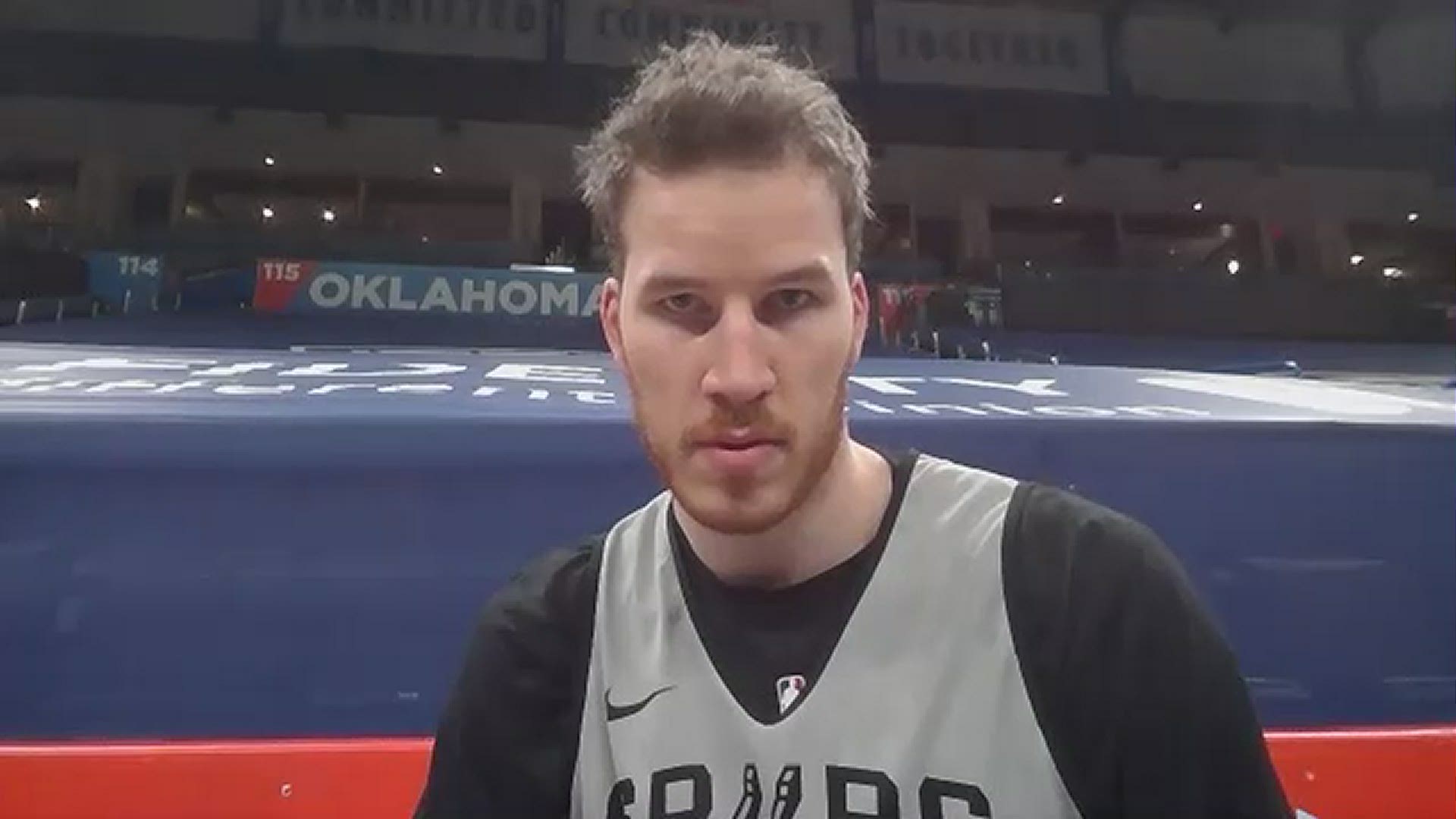 Trey Lyles started and played fairly well in the loss to Minnesota, his first real action since growing into the starting role last year and missing the bubble due to an emergency appendectomy.

Rising star Shai Gilgeous-Alexander has started the season averaging 21 points and 7 assists, and the lanky guard's matchup against Dejounte Murray should be equal parts fun and consequential.

Murray has started the season fairly strong, averaging 16 points, 5 assists, 7 rebounds, 1 steal and 2 turnovers in his first ten games. His last game against the Timberwolves was below his high standard, but tonight offers another chance to run the offense, this time on fresh legs.

DeRozan takes leave of absence due to family illness

Without their best player, San Antonio fell to Minnesota 96-88. Neither team shot well, but Minnesota's slight edge there and a much closer turnover spread hurt San Antonio in this one.

Popovich said after the game that his team just ran out of gas and ran out of bodies, with Lonnie Walker IV suffering from cramps late and Devin Vassell out after banging knees with someone.

Mills talked about the mental toll of the back to back as well as the physical. He said that with tired legs and shots not falling, San Antonio rushed things a bit down the stretch.

Pop called the loss understandable, and the players seemed even keel afterward. Aldridge finished with 20 points and 9 rebounds and said the team is bringing along the young guys, figuring out how to maximize their talent, and they're getting better and moving in the right direction overall. Continue reading here.