KENS 5 is the official station of the San Antonio Spurs 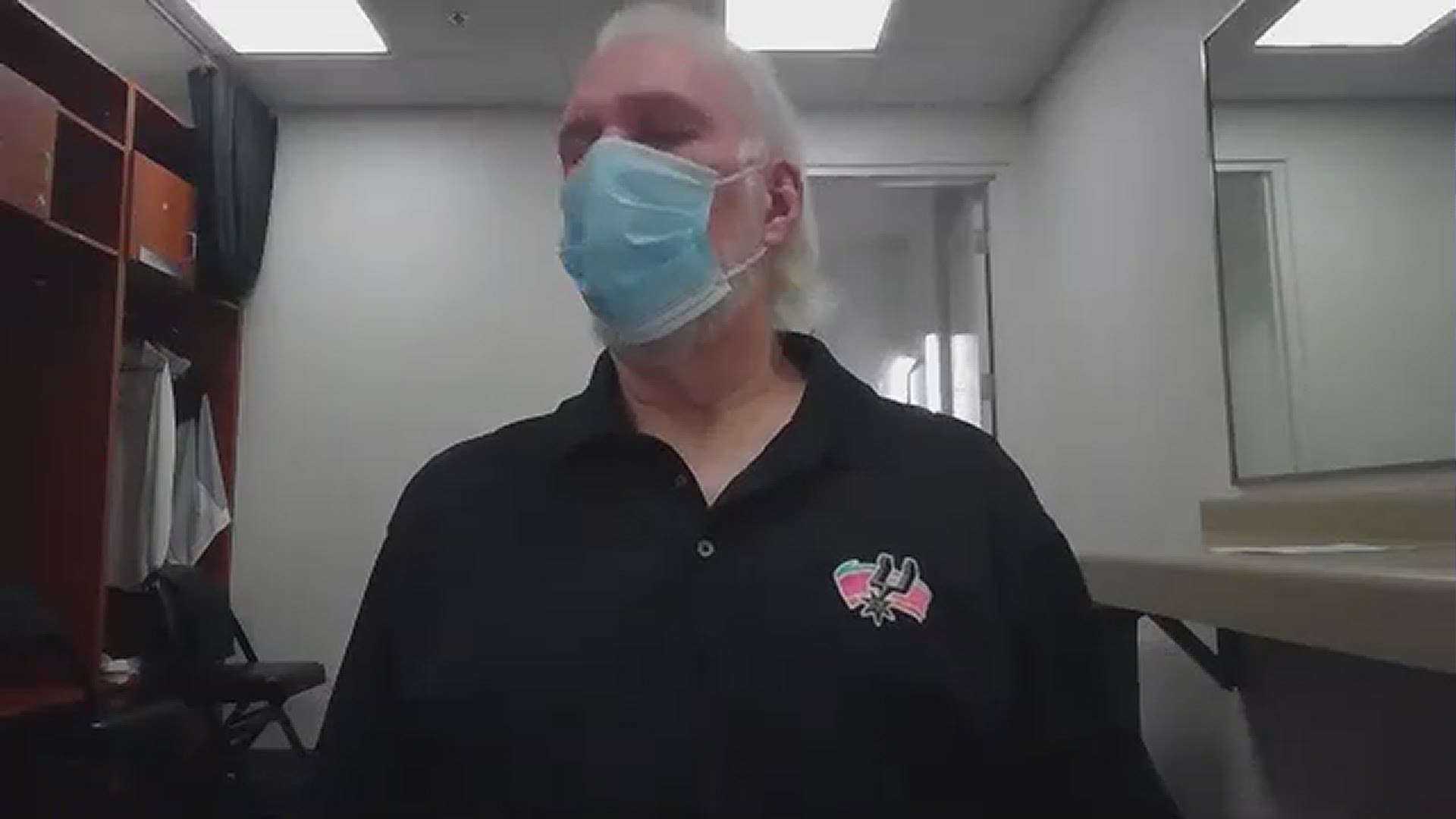 Keldon Johnson drove on the first possession and turned it over trying to dump off a pass to LaMarcus Aldridge. Aldridge got San Antonio's first bucket in the post over Ed Davis, but D'Angelo Russell hit a couple of quick threes to force a Spurs timeout down 8-2.

Lonnie Walker IV attacked off the catch and split two defenders for a finger roll and a foul, though he missed the free throw.

Lonnie splits the defense for a finger roll
pic.twitter.com/EXbm0pERZc

He hit the next two after using a dizzying spin move to penetrate and draw contact. Then he caught the ball at the arc, drove into the paint, picked up the ball at one elbow and finished a layup through a foul on the other side of the basket, though again he missed at the stripe.

This is just a ridiculous finish from Lonniepic.twitter.com/I5wJbYYyTm

Dejounte Murray made a layup and set up Aldridge for a mid-range shot in between two more makes for Walker, who had 10 of the Spurs' first 18.

Lyles had six boards in his first stint, played solid defense, and found Walker on an outlet pass dropped right in his lap for Walker's 12th point.

Trey Lyles with 6 boards in the first quarter
pic.twitter.com/bLK0HH1TNV

Walker then pulled the ball out and was left open to toss a heat-check three, but missed everything looking gassed. San Antonio missed all three attempts from deep and trailed 25-22 after the first.

Minnesota pushed their lead to seven, but after Jakob Poeltl dunked on a roll and Keldon blocked a dunk attempt leading to a Murray layup in transition, it was back to three.

Walker continued to knife through the Timberwolves defense, which looked to be in a zone, hitting free throws. Johnson caught at the top of the arc with nobody in his way, drove hard and crammed it between defenders. Walker then knocked down a triple to tie it at 33, giving him 17 points and giving San Antonio their first three in eight attempts.

Walker drove in again for a dunk to cap a 9-0 run, then hit another three on their zone. Dejounte took advantage from deep as well. With the defense focusing on Walker, he penetrated again and kicked to Patty in the corner for three. Mills then found LA for a mid-range pick and pop bucket. They tried again for three but missed, and Lyles missed a putback.

Walker finished the half with a season-high 22 points, shooting 8-14 from the floor. He seemed to jump awkwardly on a miss at the end of the half, but walked it off and looked ok.

Walker was limited in the second half with cramping, but said after the game that he's alright. 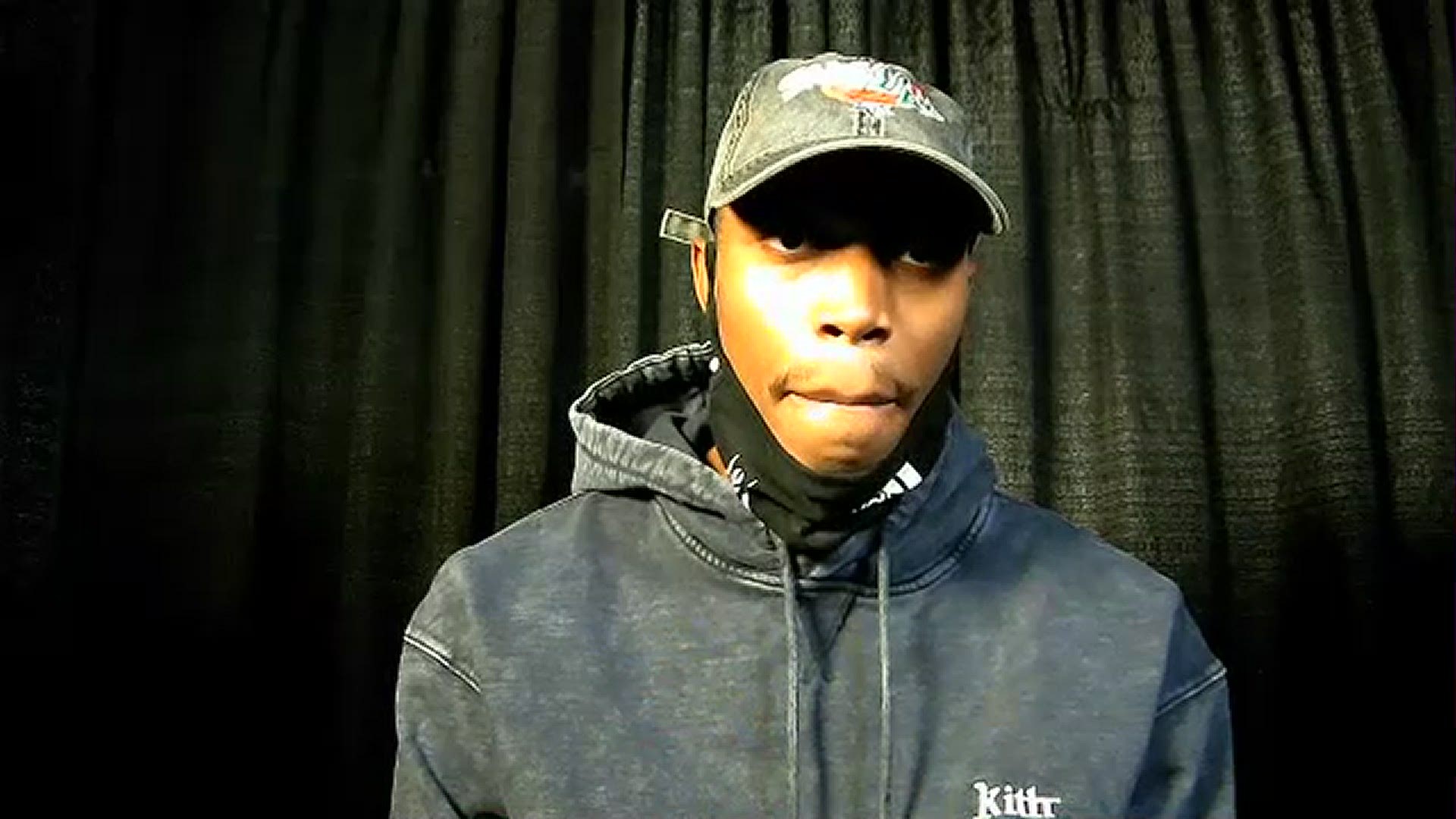 San Antonio led 49-44 at the break after a 19-point quarter on defense.

Some would call the 22-20 third quarter a defensive battle, but mainly it was just ugly. LaMarcus Aldridge scored or assisted on 13 of San Antonio's 20 points, but both offense struggled.

Patty Mills opened the game 0-5, but hit two triples to start the fourth. He passed to Dejounte Murray, who dribbled in and knocked down a floater. San Antonio pushed the lead to 77-68.

Jakob Poeltl missed two free throws with a chance to push it to double digits, and then the wheels fell off. Minnesota hit five free throws in a row after that. D'Angelo Russell hit a three, and San Antonio's 9-point lead was gone in an instant. Russell continued to attack, but Aldridge went to his old reliable post game.

Patty Mills scored six in a row for San Antonio, but the Timberwolves went to the zone and the Spurs didn't have DeMar DeRozan to save them. Dejounte Murray took it to the hole multiple times and got hit with no foul call, and the officials missed a clear double dribble by the Timberwolves.

With a minute left, the Spurs trailed by 92-87. Patty Mills made a technical free throw, then missed a quick three that the Spurs got back. Aldridge couldn't finish through contact, and the Spurs got another try at it but Mills missed a corner 3.

Minnesota extended the lead and hit at the free throw line, winning 96-88.

D'Angelo Russell finished with 27, 5 and 5, while Malik Beasley added 23. Neither team shot well, but Minnesota's slight edge there and a much closer turnover spread hurt San Antonio in this one.

Popovich said after the game that his team just ran out of gas and ran out of bodies, with Walker suffering from cramps late and Devin Vassell out after banging knees with someone.

Mills talked about the mental toll of the back to back as well as the physical. He said that with tired legs and shots not falling, San Antonio rushed things a bit down the stretch. 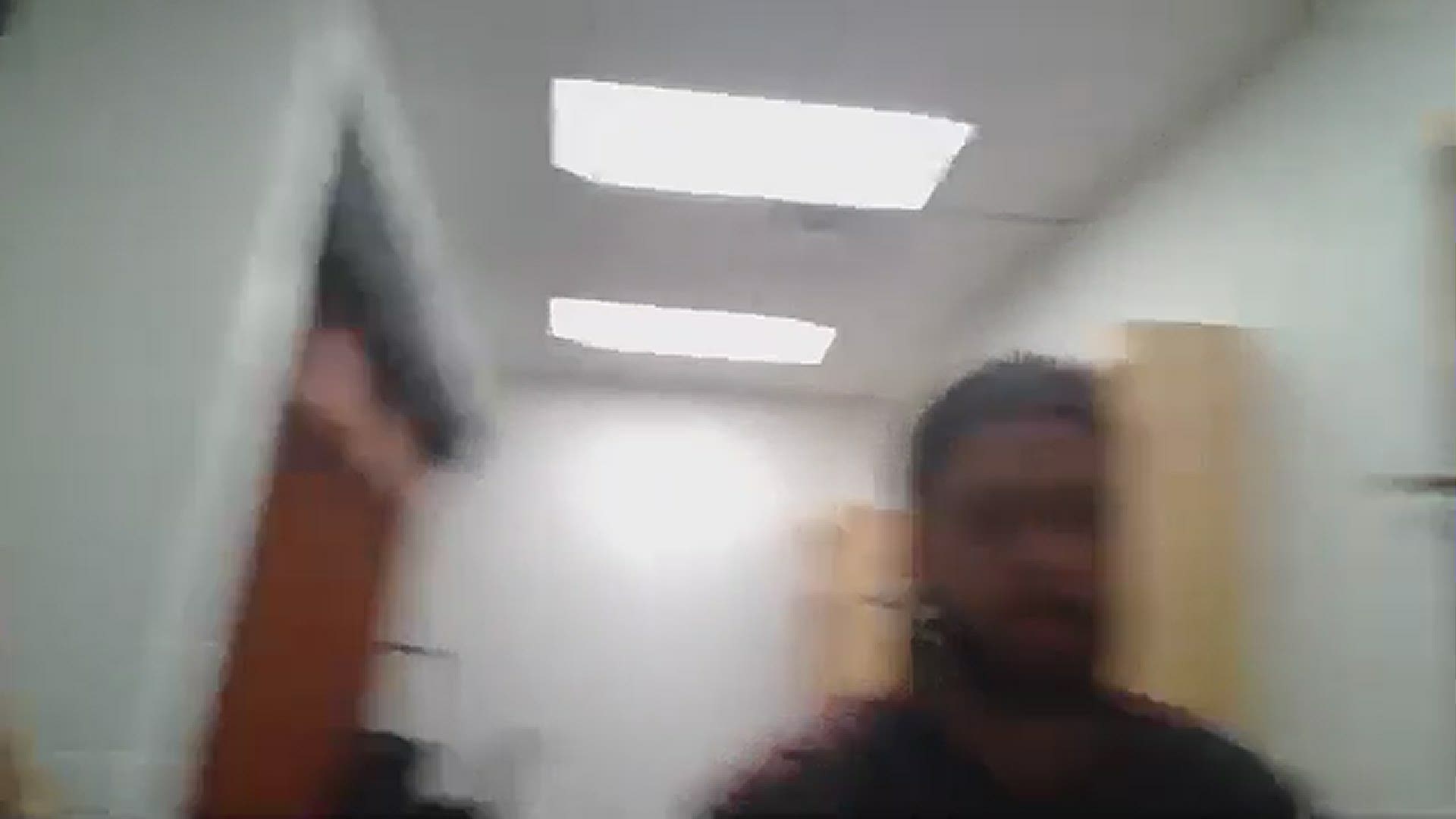 Pop called the loss understandable, and the players seemed even keel afterward. Aldridge finished with 20 points and 9 rebounds, and said the team is bringing along the young guys, figuring out how to maximize their talent, and they're getting better and moving in the right direction overall. 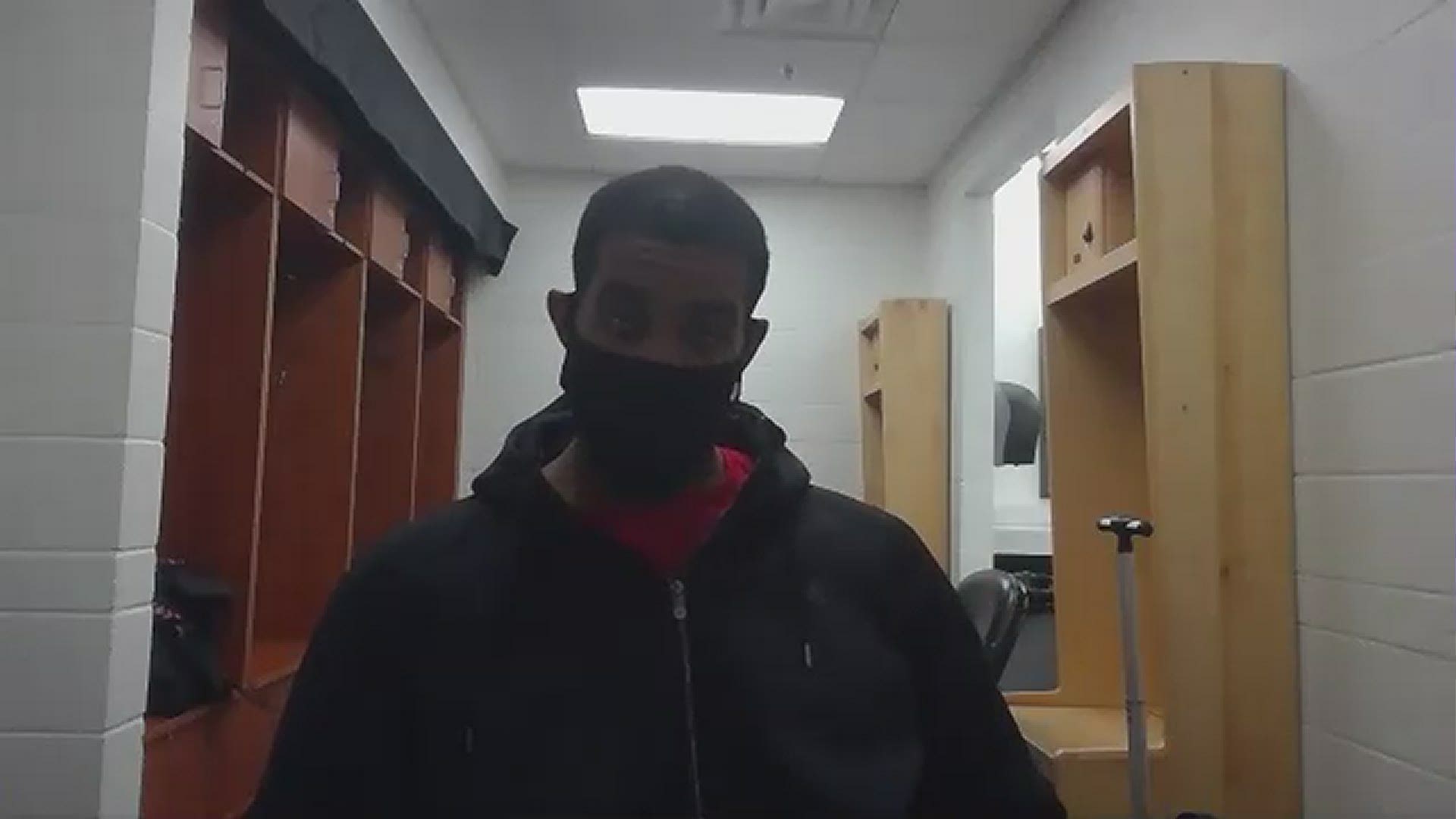 After a spectacular 38-point game to lead San Antonio past Minnesota in overtime Saturday, the team says DeMar DeRozan is out Sunday due to a personal matter. According to Jeff McDonald of the San Antonio Express News, DeRozan has left the road trip because his father is ill in Los Angeles. Family is obviously more important than basketball, and the Spurs will make do in their star's absence.

Dejounte Murray scored 22 points and added 14 boards in the win Saturday, and Coach Popovich commented on how he's growing as a point guard. He'll need to be at his best in that regard tonight with their primary creator DeRozan out. 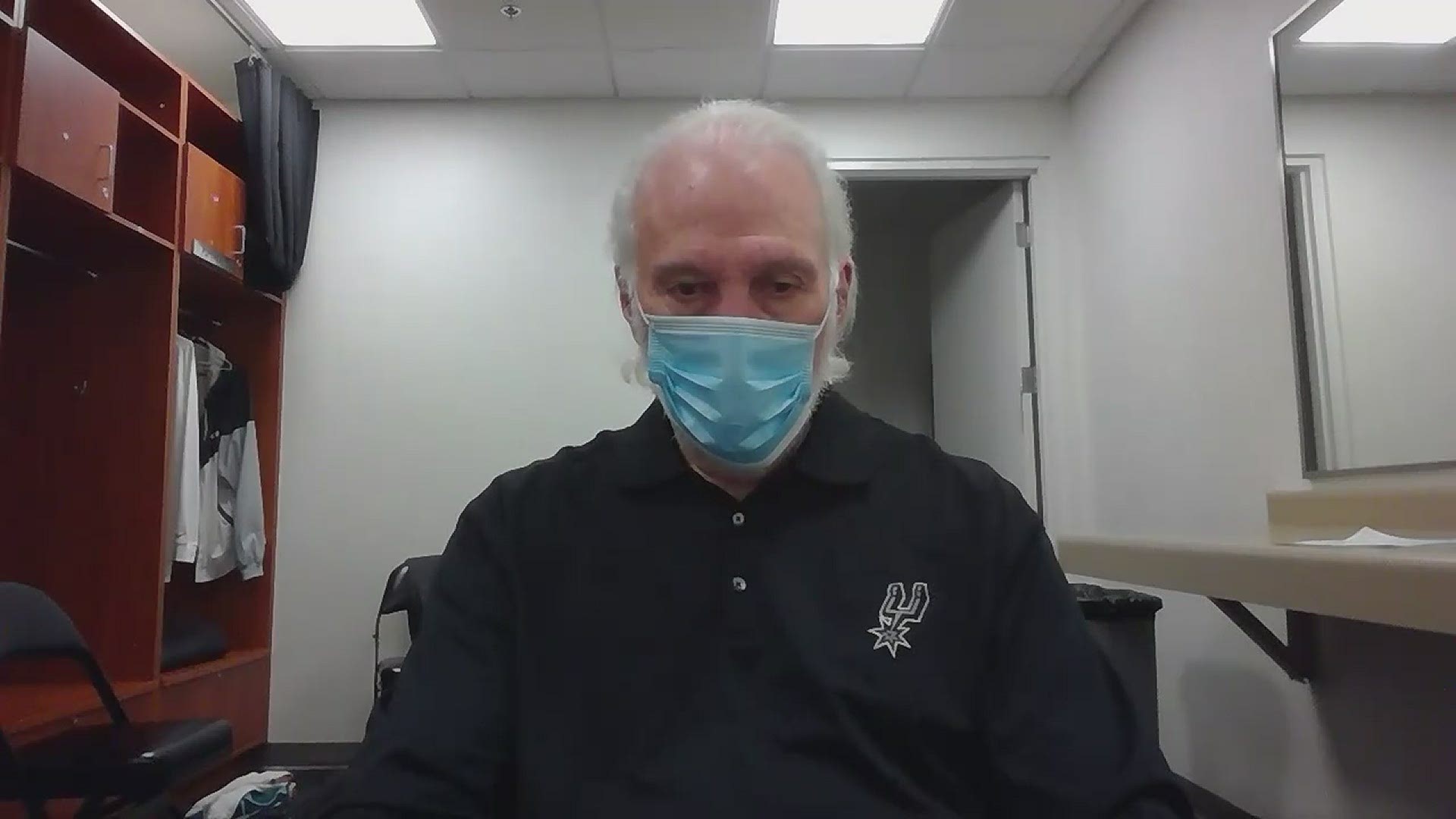 Popovich said before the rematch that Trey Lyles will start, meaning he'll play at the four with Keldon Johnson sliding to small forward. Lyles started for much of last year, and grew into the role nicely.

Lyles was ready to go in the bubble, but an emergency appendectomy sent him home from Disney before playing a game. He looked off in the short preseason, and wound up behind others on the depth chart. Outside of a blowout loss to Utah, the young stretch big has only played 11 total minutes this season. This is a big opportunity for him to show what he's got. 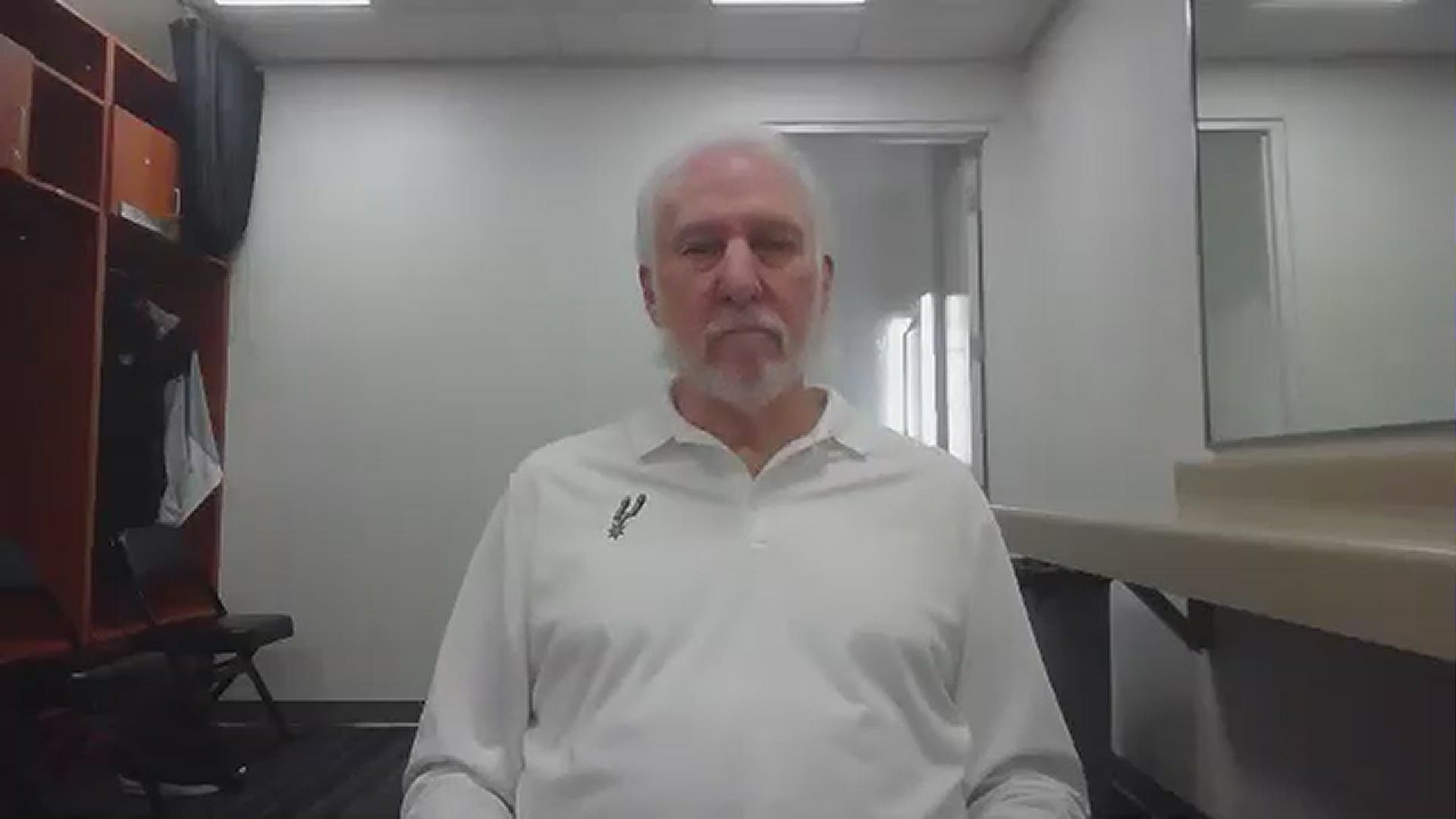 Some fans were hoping to see rookie Devin Vassell slide into the starting role, but Coach Popovich values consistency, especially in his bench unit. Moving a bench player into the starting lineup disrupts that, and giving Lyles his first real opportunity of the season avoids it while allowing Vassell to continue developing chemistry with the bench unit, where he'll likely spend most of this year making an impact.

After Saturday's contest, Karl-Anthony Towns was surprisingly candid about the health of his left wrist, which he dislocated before watching the Timberwolves lose six in a row, getting fed up with that, and deciding to rush back.

He essentially said that the team needed him, and he decided to play even though it risked his long-term health and he admitted that he couldn't use his left hand much at all. He didn't need it to put up 25 points, 13 rebounds, 4 assists and 3 blocks in a tough loss.

It's no surprise that he'll get some rest tonight. Minnesota won the first two games of the season with Towns in, but looked like the worst team in the league without him.

He provided an emotional boost in his return, as the Wolves shot a crazy 15-30 from deep despite coming into the game as the least accurate team in the league.

Minnesota played with the aggression and desperation of a team fighting to avoid their seventh loss in a row, and the Spurs executed like a team that has now won three in a row.

Coach Gregg Popovich didn't mince words about how San Antonio managed to hang on, come back and beat the Timberwolves on Saturday night in overtime 125-122.

"DeMar won the game for us, we were really stymied by the zone, and he and Patty playing out there with their pick and roll created a lot of opportunities," Pop said. " DeMar was the guy."

Indeed he was, with a season-high 38 points despite not attempting a shot in the first quarter. With the Spurs trailing and needing a run to close the game, DeRozan delivered the last nine points for San Antonio in regulation with an incredibly high degree of difficulty. (Continue reading here.)