The Spurs dominated early and built a huge lead, and the Hawks chipped away in a fourth quarter of garbage time that Coach Pop called "an embarrassment." 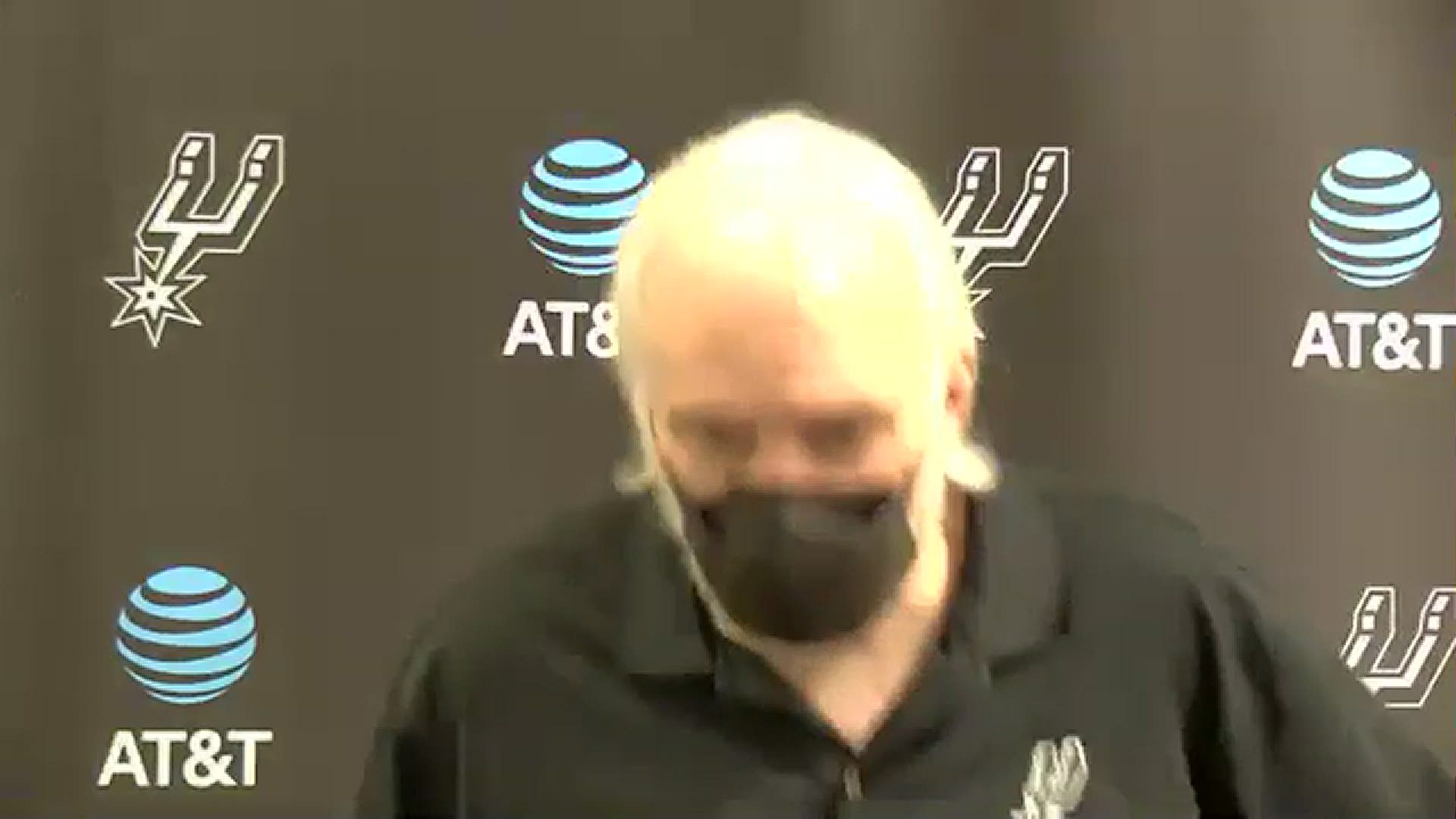 ATLANTA — The San Antonio Spurs built a 42-point lead early in the fourth after dominating the Hawks for the first three quarters, and essentially won the game there.

Coach Popovich put in his third unit and they lost the final period 42-15, but still won the game by double digits 125-114. Seven Spurs scored in double figures, while nobody played more than 28 minutes. The Spurs shot 53% from the floor and 39% from deep, notching 27 assists.

Pop said that the team did an excellent job to hold Atlanta to 72 points through the first three quarters, but called the fourth "an embarrassment."

Popovich is one of only a handful of people who can really be mad about that stretch of tragic basketball. The first three quarters were nearly flawless, and made everything that happened next a formality.

DeMar DeRozan had 23 points and 8 assists, leading all Spurs in both categories. Keldon Johnson finished with 20 points, showcasing that trademarked aggression and fire.

Jakob Poeltl shot 7-7 from the floor, snagged 12 boards, and added 3 steals and 4 blocks in the win. He played his role perfectly, and credited his teammates with finding him rolling to the basket. 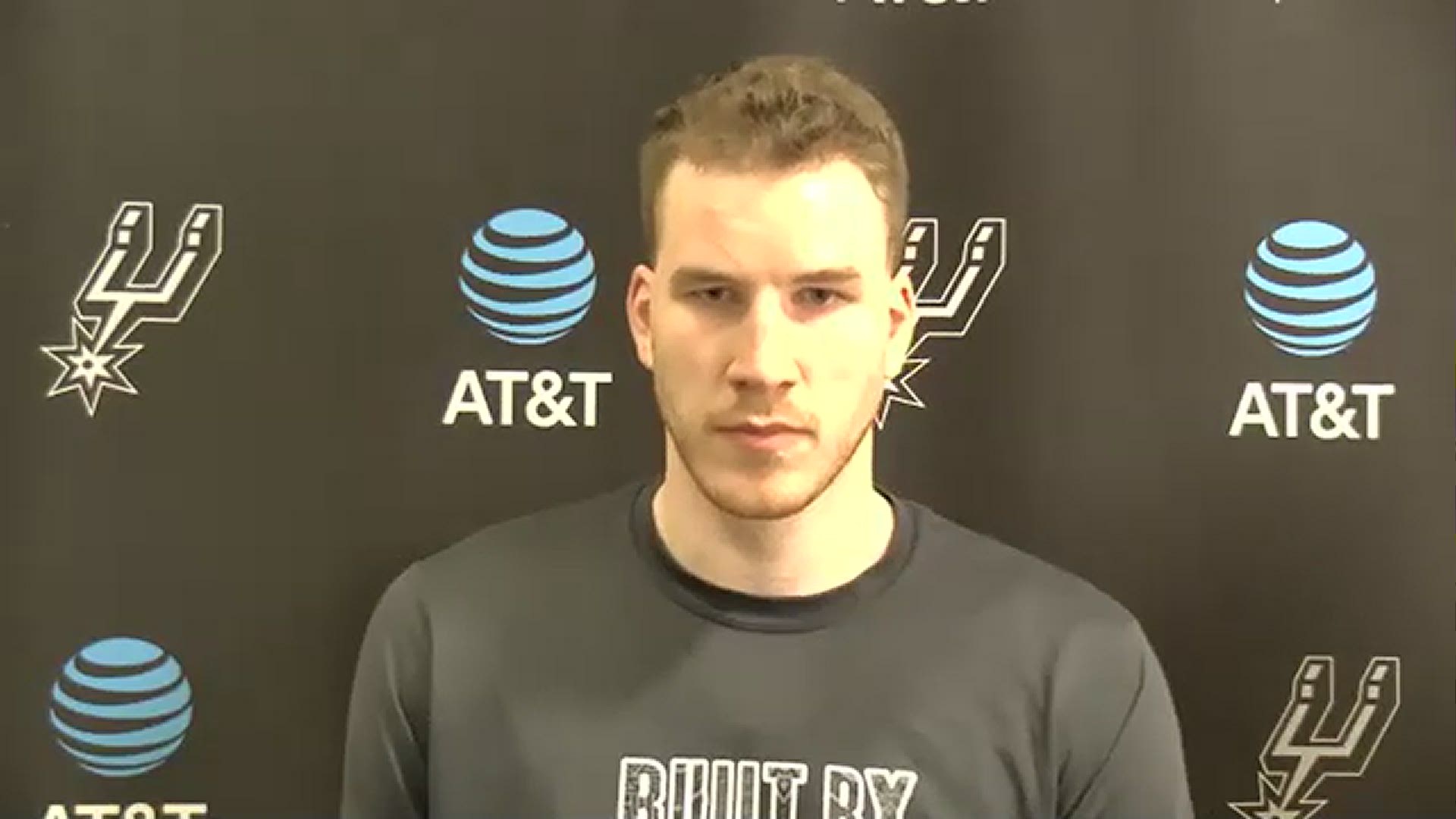 The starting backcourt of Derrick White and Dejounte Murray joined the others in double figure scoring, and they were as vital as Poeltl in defending a dangerous Atlanta team led by Trae Young, who finished with 25 points and 3 assists. The two like playing with each other, and they're a dynamic pair on both ends. 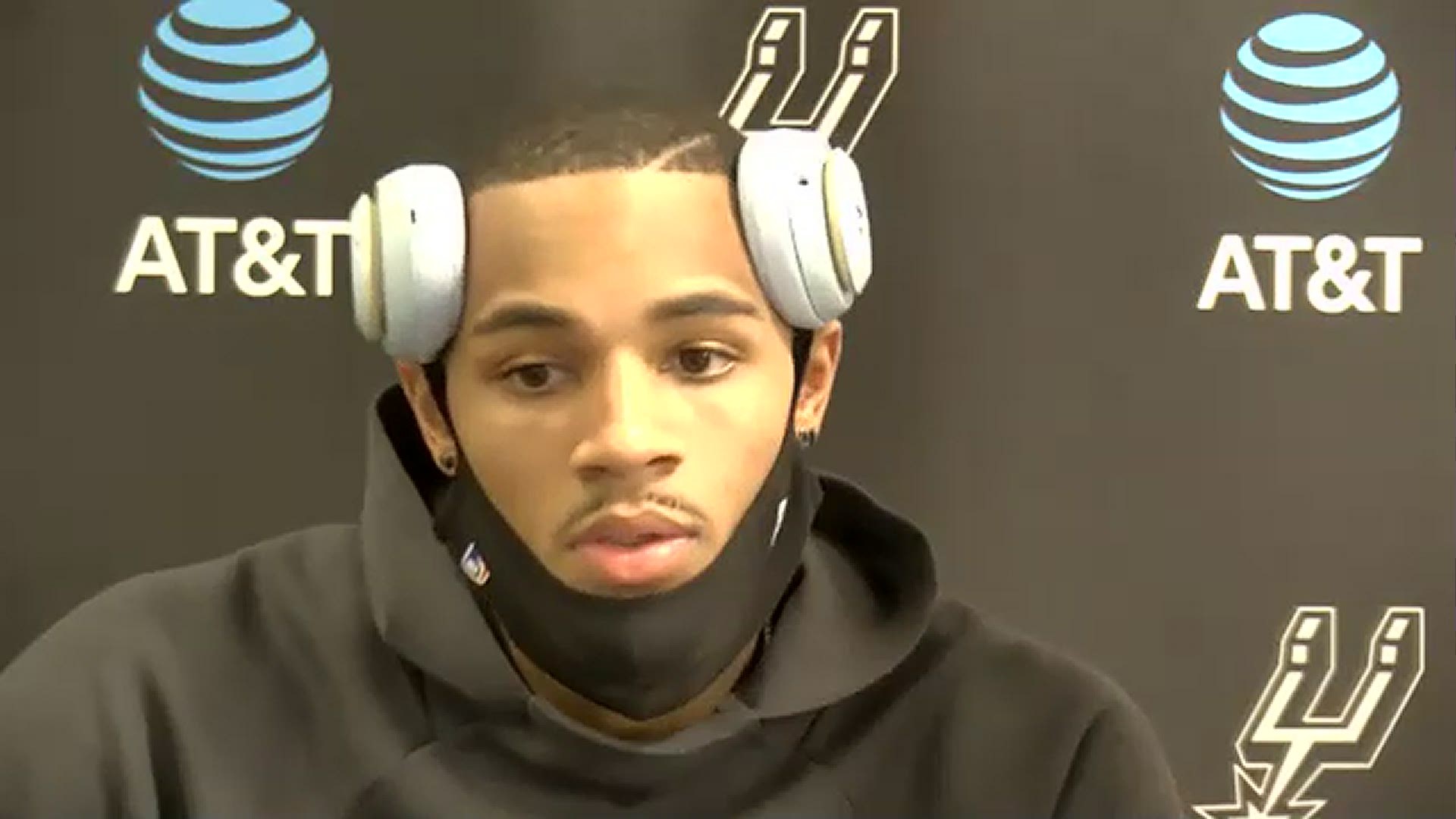 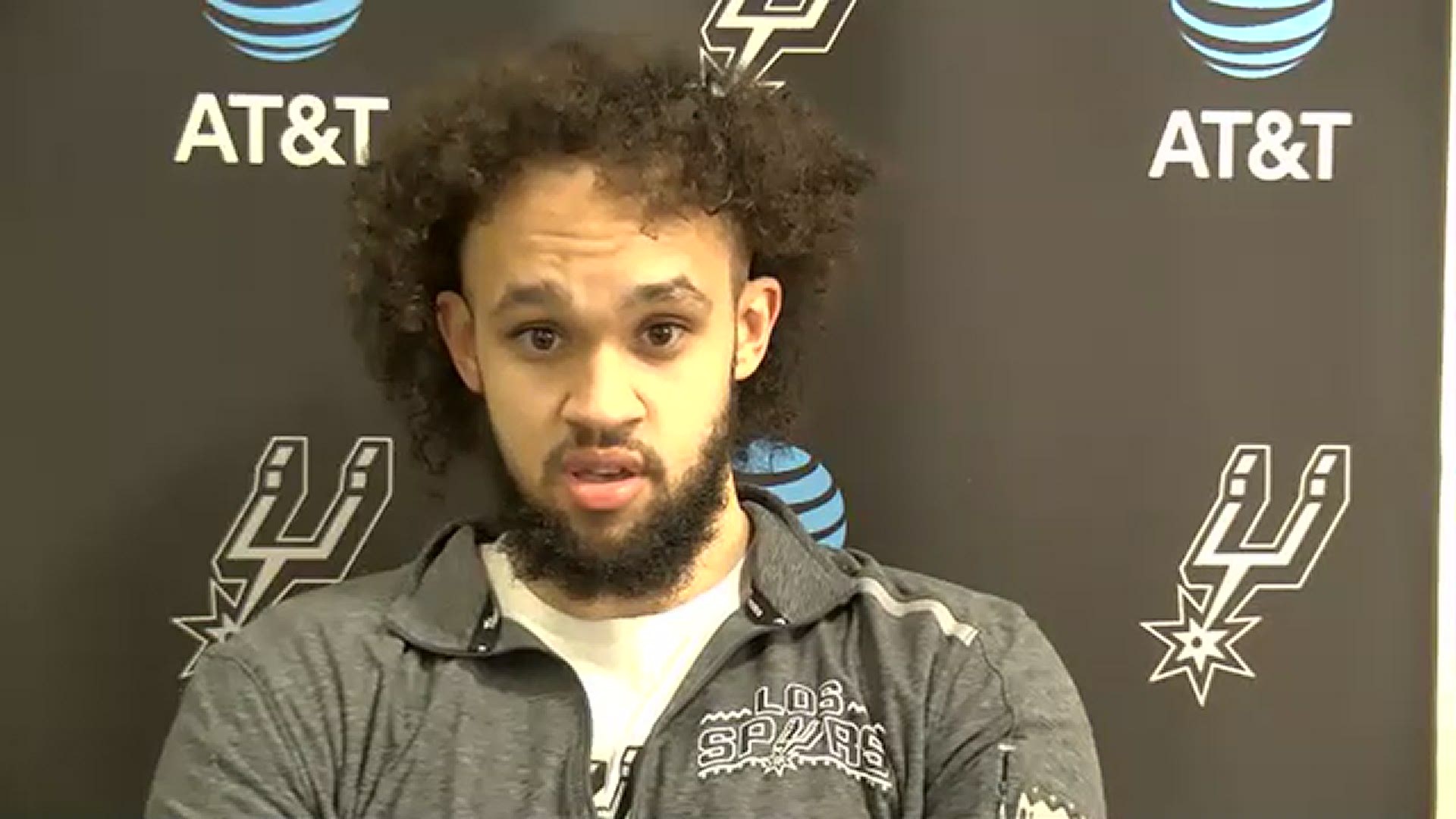 It was a total team effort that gave the Spurs a 114-72 lead. The reserve unit with Lonnie Walker IV, Quinndary Weatherspoon, Drew Eubanks, Keita Bates-Diop, and Trey Lyles did not fare well after that, ceding a 42-11 run to close the game.

Pop can yell at his guys about that part, and was probably relieved because he was worried there wouldn't be anything to coach up after the brilliant execution through the first 37 minutes.

Lonnie Walker IV opened the fourth with a mid-range jumper to give the Spurs a 40-point lead, their largest.

Pretty much the entire second half of the game was garbage time, with the starters all sitting on the bench for the fourth with 26 minutes or less played.

San Antonio took their foot off the gas and put in their deep reserves as Atlanta dominated the fourth, but that just meant making it closer than 20 points.

No Spur played more than 28 minutes

Jakob Poeltl opened the period with an interior stop, and on the other end Derrick White found Keldon Johnson in the corner for three. White blocked a driving attempt with a clean strip, then dumped it off to Johnson in transition for a reverse layup.

The Hawks scored twice, but Keldon Johnson drove for a layup and then hit a three. Capela scored twice, and Pop called timeout with the Spurs up 92-57.

Trae Young scored a few buckets, but Dejounte had an answer for each. Poeltl finished a floater, joining the other four starters in double figures.

Poeltl's interior defense continued to anchor things for a San Antonio team that held the Hawks to 40% shooting and forced 12 assists to just 13 turnovers through the first three quarters. Patty Mills hit a stepback three at the end of the third and got fouled, giving the Spurs a 110-72 lead heading to the fourth.

Patty did this for fun pic.twitter.com/wx4er3AGHv

Atlanta opened the period on a quick 4-0 run, but Patty Mills, for whatever reason, was feeling himself. He hit a deep three off a pass from Derrick White, then penetrated, dribbled back out to the arc, and hit another.

Patty came out in the second quarter and chose buckets pic.twitter.com/WAXThCiA3h

White drilled a triple, Patty hit a floater, and Rudy Gay turned around for a tough jumper to make it 50-38.

Derrick pulled up comfortably for this one pic.twitter.com/ooDCAUaMg3

Jakob Poeltl got a few more impressive blocks. Derrick dribbled into another three and hit. Keldon Johnson drove inside and used a strong half spin in the post to beat John Collins for a layup.

DeRozan found Dejounte Murray for three, and after some good defense he found Keldon in transition for a layup. Murray pulled up at the free throw line for a jumper, and Devin Vassell blocked Trae Young and hit a triple. DeMar hit free throws to make it a 16-0 run.

Atlanta finally got on the board, but DeRozan just kept scoring and finished the half with 22 points. The Spurs went into halftime up 77-48.

Keldon Johnson and Derrick White opened the scoring by getting to the rim for the Spurs. They got a few steals to generate transition opportunities.

DeMar DeRozan and Dejounte Murray scored mid-range buckets, and DeRozan found Murray in the corner for three before getting to the basket.

DeMar to DJ for three 👀 pic.twitter.com/8YP498fdng

San Antonio built a 13-6 lead before Trae Young got a switch on Jakob Poeltl and hit a three.

Trae came back down and went into the paint, where Jak swatted him. DeRozan got to the basket in transition for a tough reverse layup.

Murray and John Collins exchanged words early after getting tangled up, resulting in a double technical foul.

DeRozan got to the line for free throws, then Poeltl met Reddish at the rim to force a missed dunk. On the other end he made a nice backdoor pass to DeRozan, who was blocked again by Reddish. Poeltl wound up getting a layup.

On the next trip he got a roll pass, then found Keldon underneath with a fun little bounce pass to give the Spurs a 21-11 lead.

Love the pass from Jak, love the slam from Keldon pic.twitter.com/LOJBbXjq9n

Jak fouled Collins in close, then defended him well on the next try to force a miss.

The Spurs had done a good job of limiting Trae Young, but he got loose in transition and got Lonnie Walker IV in the air with a pump fake, getting to the line for three free throws. Lonnie made up for it by knocking down a three on the other end.

A few possessions later, Young crossed Walker over so hard he created a good eight feet of space for a three, which he drilled. Young made a few layups, but DeRozan finished in close, Rudy Gay hit a three, Drew Eubanks blocked a stepback three, and Lonnie got to the rim aggressively for a layup. Patty Mills drew a charge, DeRozan pulled up and hit from mid-range, and he ended the first quarter with 14 points

Young drew another three-shot foul on Eubanks this time and he made two, giving him 17 points. The Spurs led 36-29 after a quarter.

The Spurs barely missed the playoffs, and games like those cost them dearly in that chase. Atlanta finished last season 20-47, and the San Antonio couldn't take care of business either time.

The Hawks are better this year at 11-13, but the Spurs are better than they were last year too. Derrick White has been known to put Trae Young in the torture chamber, and he should be ready to go after resting in the last game as he comes back from a broken toe. Before the game, Popovich all but confirmed that White would start. 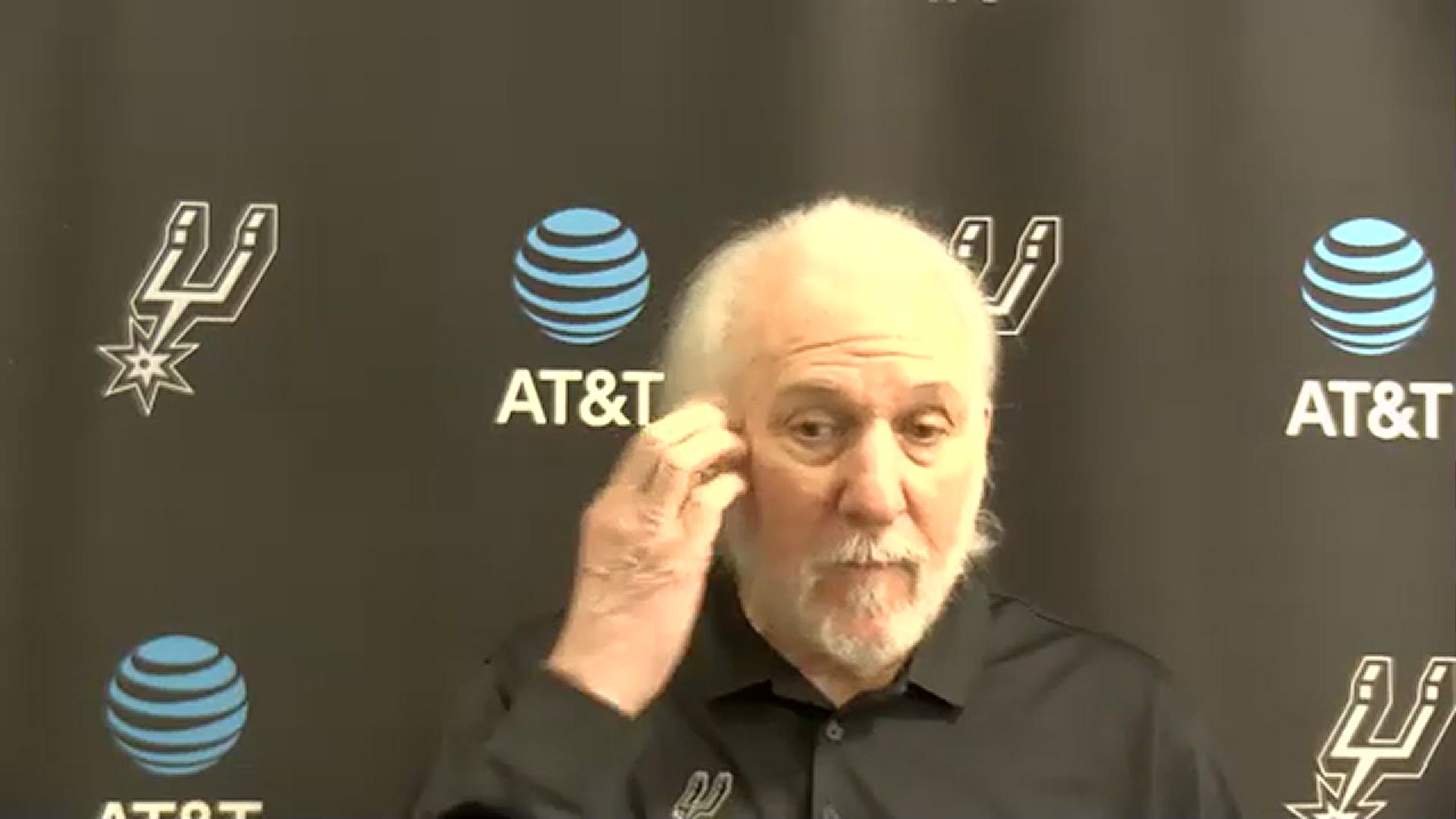 Derrick White is indeed back in the starting lineup https://t.co/qhh0KQhE04

This is a homecoming game for rookie Devin Vassell as he kicks off his first Rodeo Road Trip in his home state of Georgia, complying with the health and safety guidelines and seeing tested family members that he hadn't seen since November. They'll be allowed as some of the limited crowd in Atlanta. 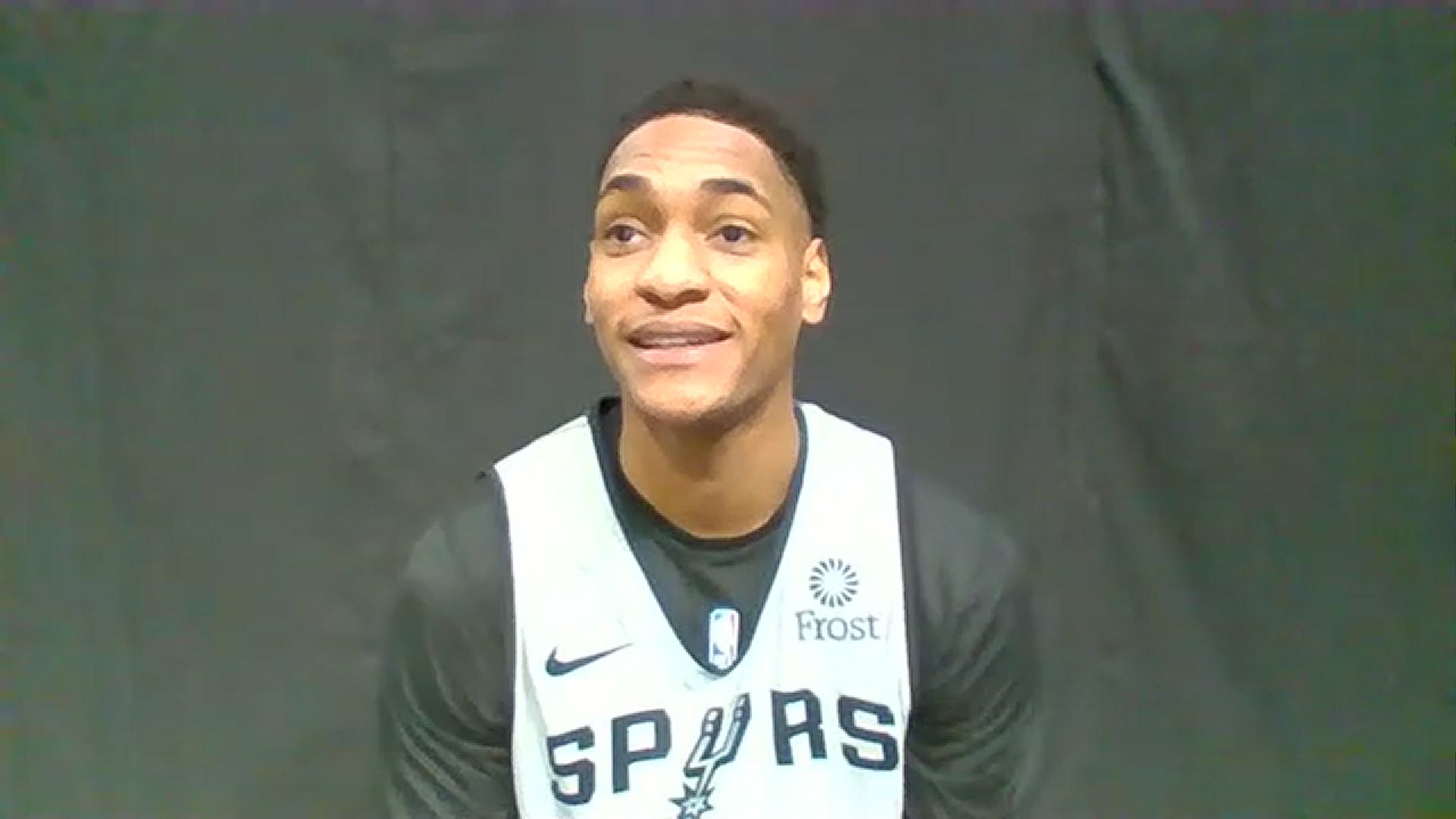 Rumors are swirling about Hawks big man John Collins, who apparently wants out of Atlanta. He's a homing missile of a lob threat, and he's averaging 18.5 points, 7.8 rebounds and a block per game while shooting 41% from deep.

There's no debate about whether or not he would fit in San Antonio, he'd fit almost anywhere with his versatile skills as a complimentary big. The main reason he's reportedly looking for a change of scenery is that he's grown tired of watching Trae Young's shoot and dribble show, and would prefer to play in an offense with more unselfish movement.

The question is how would the Spurs bring Collins in, and how much is too much to pay? They could wait until the offseason and offer him a contract as a restricted free agent, but he'll probably get a bunch of offers and the Hawks could match, though that seems unlikely.

San Antonio could try to get in on the alleged trade market for Collins, but don't expect them to break up the core that they're working with to bring him in. You could argue that it would make the most sense, and you might be right, but it would be quite out of character for this organization.