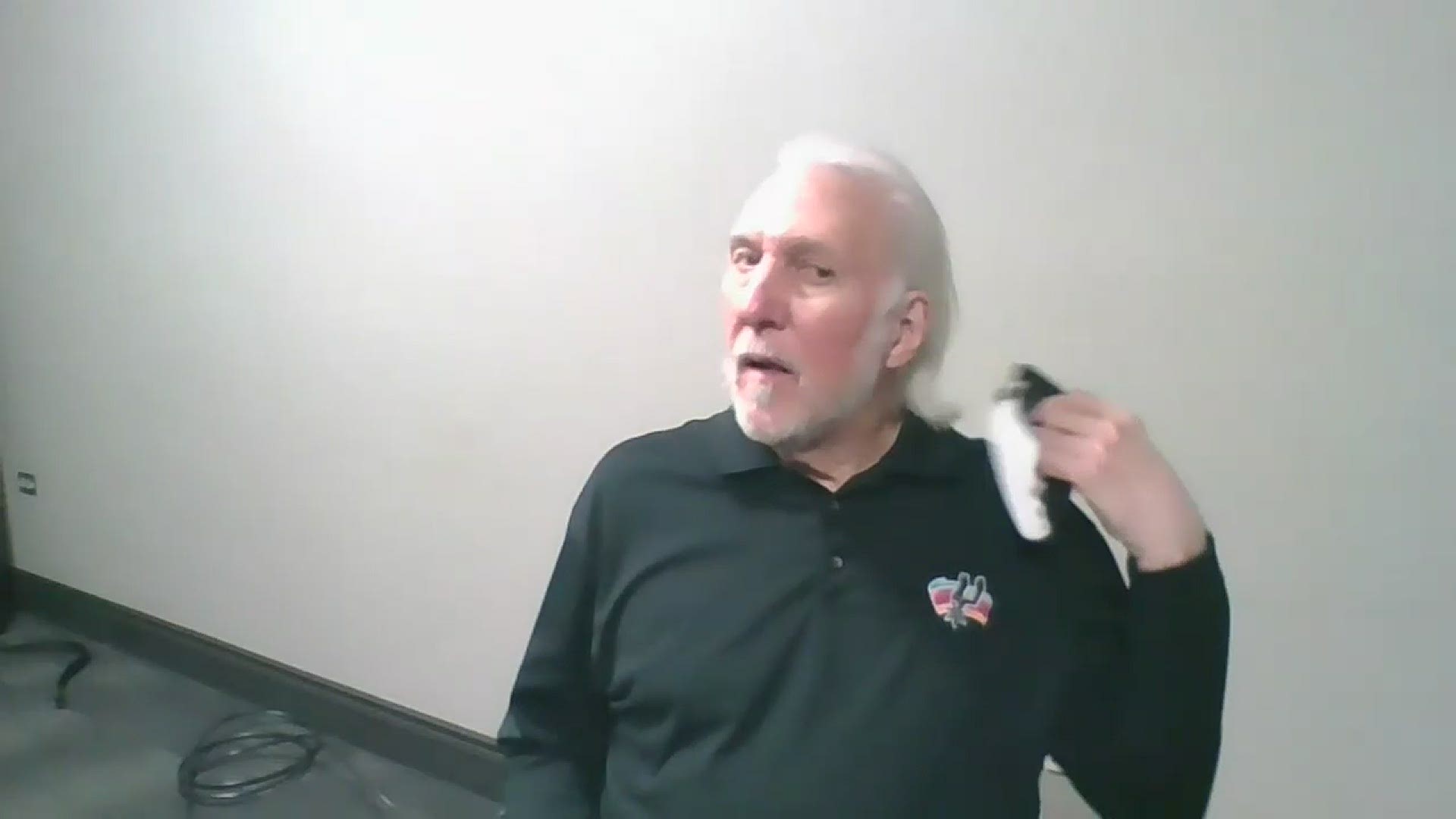 DENVER — The San Antonio Spurs had things going their way in the third quarter as they took a ten point lead, but the offense stalled and the Nuggets blew them out in Denver, winning by a final score of 106-96.

Nikola Jokic finished with 25 points, 10 assists and 9 rebounds, while young star Michael Porter Jr. added 18 and 10 to help the Nuggets to their seventh win in a row.

After the game, coach Gregg Popovich identified the bench unit that started the year so strong for San Antonio as an area of concern.

"Second team’s got to play better," he said. "You just look at the plus/minus from the last few games, first team is doing pretty well, but off the bench we’ve been just destroyed and it happened again tonight."

On that note, he's been riding heavily with veterans Patty Mills and Rudy Gay in this stretch, and tonight the Spurs were outscored by 22 points in Gay's 22 minutes and by 29 in Mills' 25. When that bench unit came in in the third quarter, San Antonio's lead evaporated in an instant. Gay's struggles have been noteworthy of late, and he shot 2-10 in this game.

Gorgui Dieng should help with the center depth, but he looks like he's playing through shoulder pain after spraining it in his debut and missing a few games. Pop pulled him after he showed clear discomfort on a block attempt, holding him to just 10 minutes.

Mills appreciates what Dieng brings, and said postgame that as he gets integrated into the rotation, the team should improve. 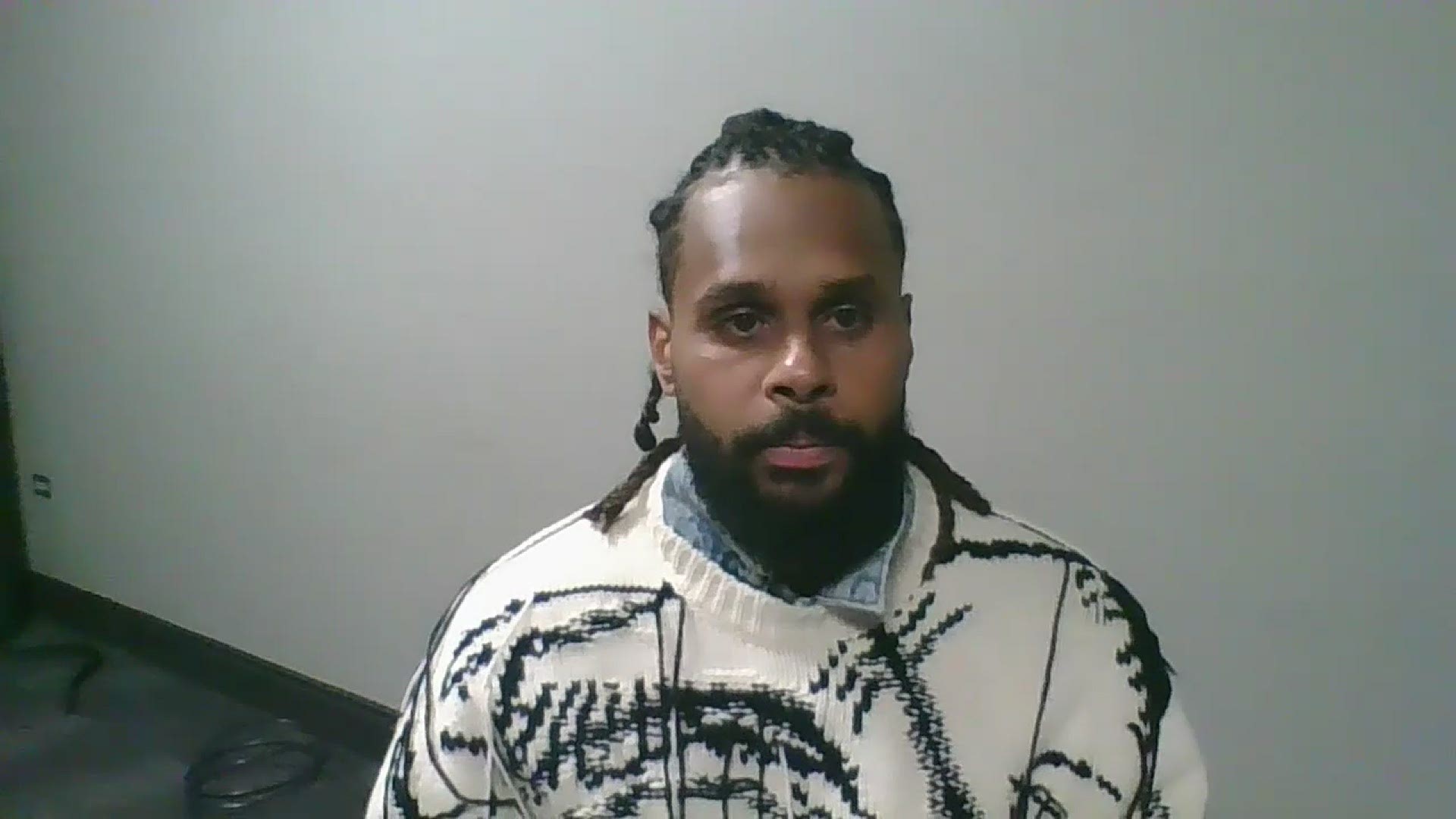 The Spurs have now lost four in a row, falling to 24-25 on the year as the playoff race heats up.

RELATED: BIG FUN POD: The Spurs train has derailed, but is it too late to get back on track?

Dejounte Murray said postgame that through ups and downs, wins and losses, the mentality moving forward needs to be "win, win, win." 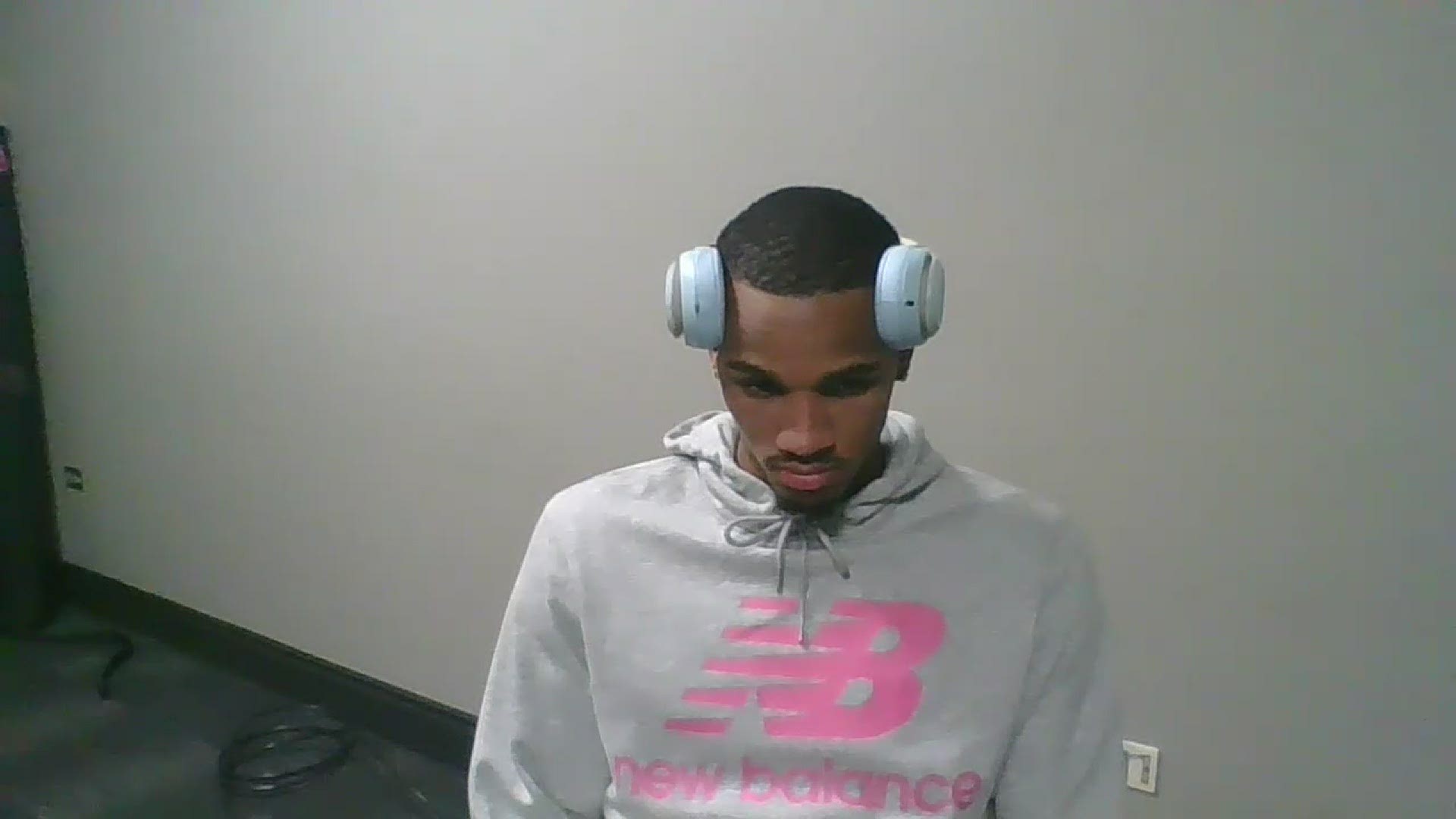 After building a 10-point lead in the third, San Antonio went almost eight full minutes without scoring a basket, largely with Nikola Jokic resting on the bench.

Denver built their lead out to 16 with a little over 6 minutes left. Jokic came back in, and missed an open layup. After an open three in transition, the Nuggets took a 100-81 lead. Coach Pop put his reserve unit in, waving the white flag with over five minutes left.

That group didn't have much better luck getting the lid off the basket, missing layups and generating little en route to a loss that would drop San Antonio below .500.

DeMar DeRozan hit a jumper and Jakob Poeltl finished in close to tie it at 54 to start the second half.

Derrick White drew an offensive foul, then blocked Nikola Jokic at the rim, then put down a transition layup. DeRozan hit another jumper, Poeltl stole it from Jokic, and Murray crammed a transition dunk, forcing the Nuggets to take a timeout after a 10-0 run.

Poeltl tipped in a miss, and Murray knocked down two open threes in a row to put the Spurs up 68-58.

Popovich called timeout after Denver scored two consecutive buckets, and inserted Patty Mills. Rudy Gay came in a few plays later. It didn't help, as the Nuggets scored six more in a row to knot it at 68. DeRozan and the Spurs had a few turnovers, and he picked up a technical, giving Denver the cap to an 11-0 run and the lead.

Denver built their lead out to 81-74 at the end of the quarter.

Patty Mills came off a screen, let a three fly, and hit nothing but twine. Dejounte Murray pulled up and hit from mid range, and San Antonio built their lead to 7.

Denver answered with three buckets in a row before Gorgui Dieng drew a foul underneath. The Nuggets tied it at 38 on a pick-and-roll lob dunk.

Nikola Jokic lost the ball through some physical defense, and Denver coach Michael Malone jumped onto the court to scream at the officials for a few moments before being tossed from the game.

DeRozan hit a free throw, Murray finished at the rim on a feed from White, and San Antonio went up 44-42. Jokic tied it in the post, but Murray hit another mid-range jumper. He ripped a steal and had a chance in transition, but couldn't hit.

White stepped up for a crushing block in transition, one of his specialties.

THE CULT OF VERTICALITY pic.twitter.com/318qvFdVww

White made masterful use of a screen to beat his man and keep him on his back hip, hitting a floater over Jokic. DeMar hit a corner three to put the Spurs up 50-48, but MPJ got a switch on Poeltl and got fouled at the arc for three free throws. Pop put Gorgui Dieng in as Poeltl had three fouls.

Jokic picked up a driving assist on a feed to the corner, putting the Nuggets up 54-50.

Derrick White opened the scoring for San Antonio with a catch-and-shoot three, a habit he's gotten into.

Nikola Jokic got a bucket and a lob assist, but Keldon Johnson broke up an attempted dribble handoff and finished a tough layup in transition.

Keldon took the DHO from Jokic and finished through MPJ 💪 pic.twitter.com/ImdpHhjQGQ

A few possessions later he caught at the arc, drove in on Michael Porter Jr., and scooped it under his contest for a layup.

White missed a three, but Jakob Poeltl got the board and dished to Dejounte Murray for a jumper in the paint. San Antonio built an 11-6 lead, but after a timeout, Denver evened the score behind Jokic's playmaking.

Murray hit another jumper, but Jokic answered on a cutting layup. Johnson drove in on Porter impressively, crossing over multiple times and creating space at the basket.

There’s a LOT to unpack with this crossing, powerful drive by Keldon

San Antonio tripled Jokic under the basket, Dejounte came away with it, and wound up finding DeMar DeRozan for a cutting finish through contact.

DJ starts the break, finishes with a pass to DeMar pic.twitter.com/waKZUXw0x8

Michael Porter Jr. hit a tough contested jumper, but Jak found Derrick on a cut and he pump faked and finished through Porter.

Patty Mills came in off the bench and promptly hit a three on a feed from Rudy Gay.

The ball movement though pic.twitter.com/aMifRpsI2b

Later in the quarter Mills attacked in pick and roll, put Jokic on skates with a crossover, and finished with a reverse scoop.

Patty made Jokic do the dance 🥴 pic.twitter.com/96jL5jCB2h

Dejounte Murray missed San Antonio's last contest, a disappointing blowout to Cleveland, but will be active and starting tonight in Denver.

Before the game, coach Gregg Popovich said that his confidence and decision-making ability have improved this season. 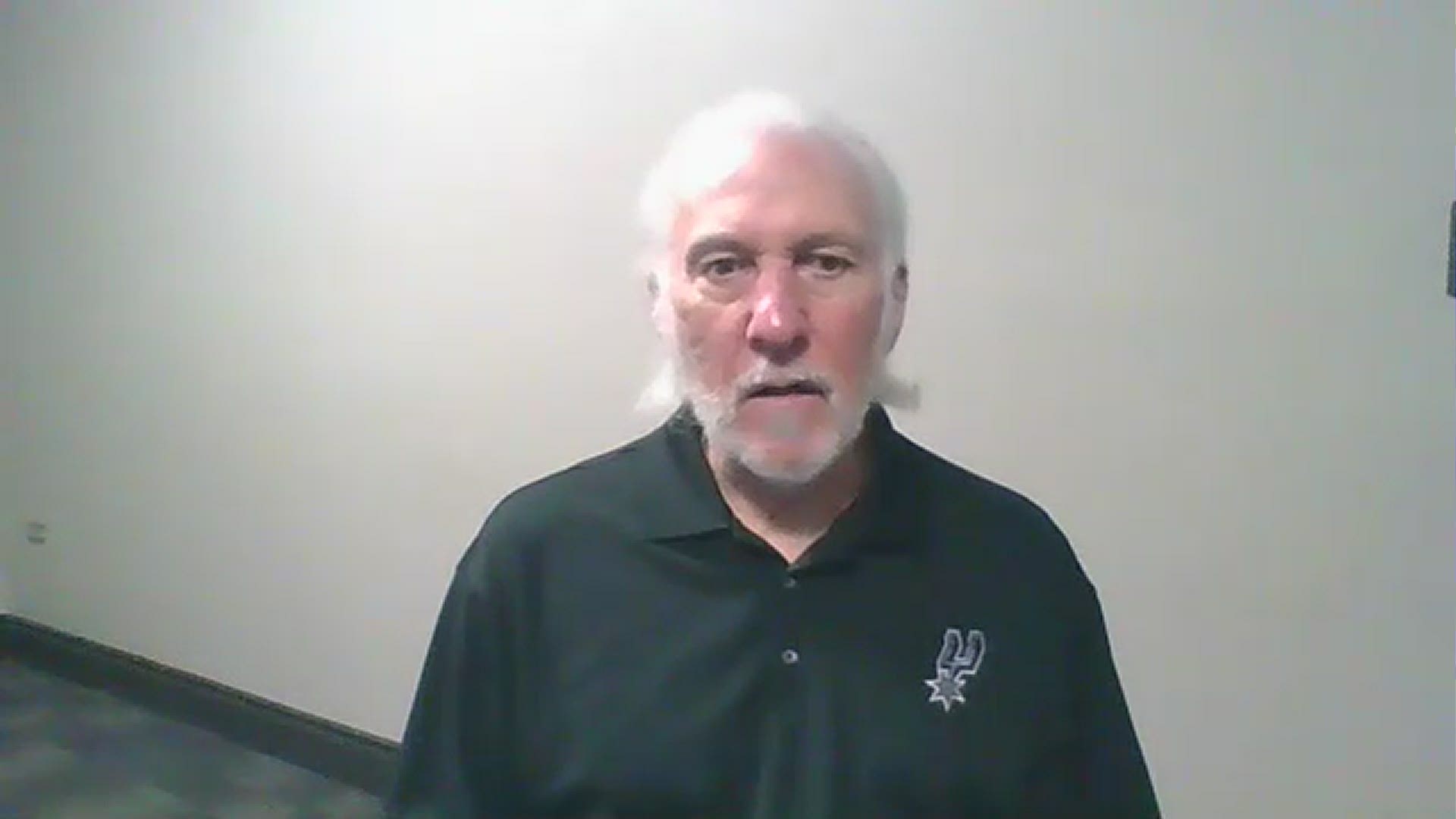 San Antonio has lost eight of their last ten games, reeling due to a combination of factors discussed in detail on the latest episode of the Big Fundamental Podcast.

RELATED: BIG FUN POD: The Spurs train has derailed, but is it too late to get back on track?

Meanwhile, the Nuggets won their sixth game in a row last night, smacking Detroit in such a way that key players were able to rest up for the back-to-back tonight.