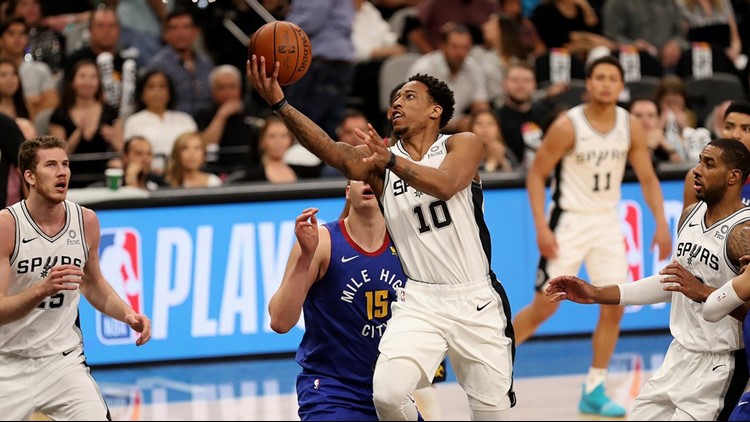 Photo by: Photo by Antonio Morano (bit.ly/XR79FT) / Special to KENS5.com
Spurs guard DeMar DeRozan, gliding past Nuggets center Nikola on a drive to the basket, scored 25 points in Game 3 Thursday night at the AT&T Center.

The San Antonio Spurs’ DeMar DeRozan has been fined $25,000 for throwing the ball at an official in the fourth quarter of Saturday’s Game 4, the NBA announced. DeRozan was ejected from the game after the incident, which occurred with 5:01 remaining in the Spurs’ 117-103 loss to the Denver Nuggets at the AT&T Center. The Spurs were trailing 110-92 at the time.

DeRozan’s annual salary is about $27.7 million, per sports contract database Spotrac.com. The $25,000 fine represents less than 0.1 percent of his team salary. The fine is similar to someone earning $50,000 a year paying a $45 ticket.

RELATED: Nuggets roll to 117-103 win over Spurs, even series 2-2 and regain home-court advantage

RELATED: Tickets to Game 6 of Spurs-Nuggets now on sale

The second-seeded Nuggets and the seventh-seeded Spurs are tied at two games apiece in the series. Game 5 is slated for 8:30 p.m. Tuesday night in Denver. Game 6 will be in San Antonio on Thursday night and tickets are now on sale.