GAME TIME: Spurs look to build on momentum in huge matchup against Memphis

Momentum = Mass x Velocity. The Bubble Spurs are bigger and faster than they were earlier this year, and they're moving in the right direction and picking up steam. 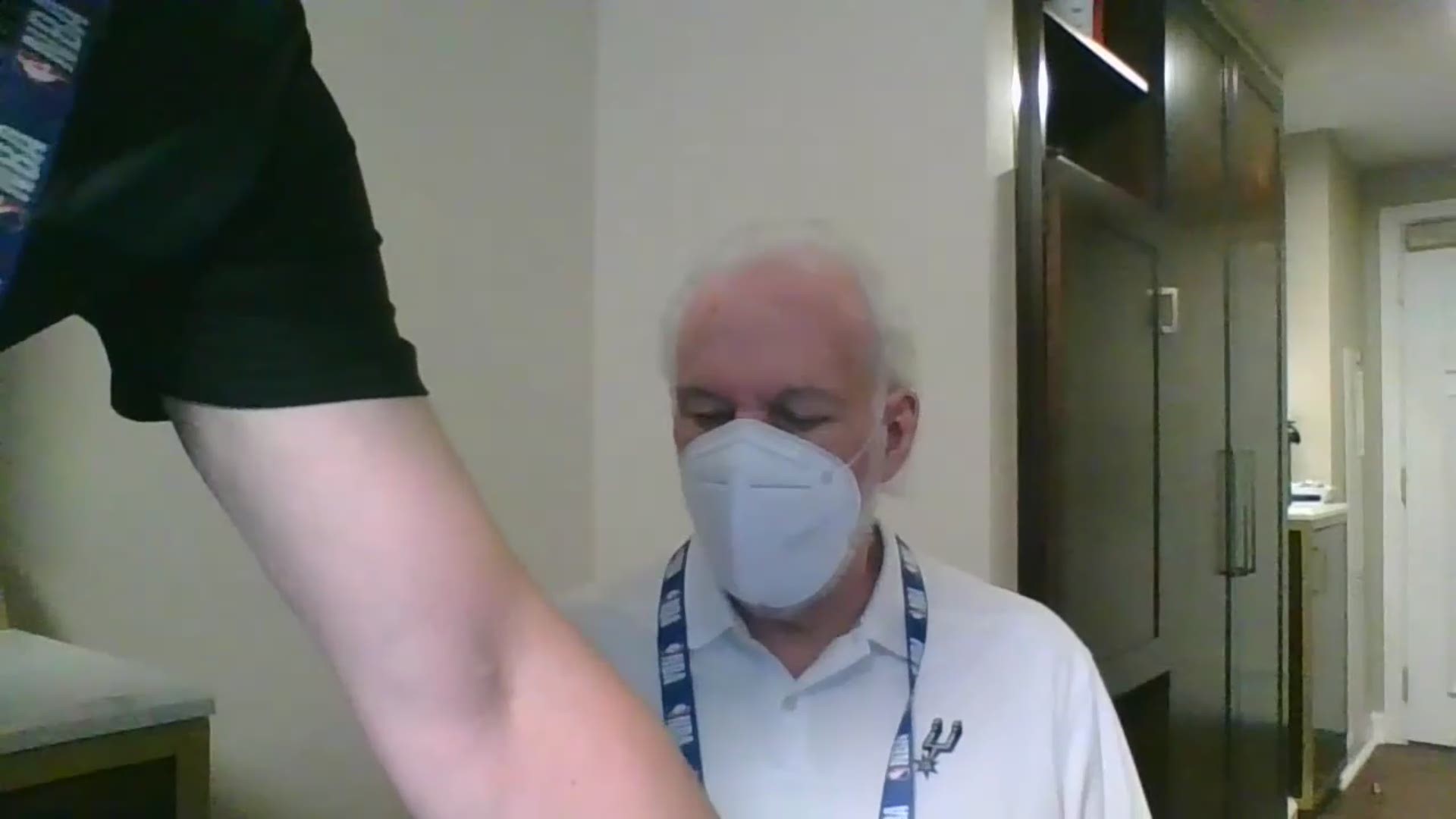 ORLANDO, Fla. — Talent and luck are key to any playoff run, but perhaps in this year more so than any other, momentum can be the factor that puts a team over the top.

The Spurs are clearly building momentum in the bubble, finishing their scrimmage slate with a crisp win over Indiana and following it up with a gritty victory against the Sacramento Kings, who they'll need to beat out for a chance at a playoff spot. The next game is Sunday afternoon against the Memphis Grizzlies, who currently hold the eighth seed in the West, just three games ahead of the Spurs.

Let's begin with the velocity portion of the equation. The Spurs entered the bubble without LaMarcus Aldridge. He's one of their top players, but undeniably a slow one. According to the NBA's stats page, Aldridge played at the slowest pace of any player on the team at just 99.8 possessions per 48 minutes.

The Spurs played at an average pace during the season, right about 101. In their 129-120 win over Sacramento, however, the pace skyrocketed to 107.5, which is faster than the fastest team in the league all season.

That accelerated tempo isn't just about the removal of Aldridge, it also comes from increased roles for high-energy guys like Derrick White, Lonnie Walker IV, and Keldon Johnson, who thrive in transition. Jakob Poeltl has done a commendable job of keeping up with the new starting lineup alongside Dejounte Murray, White, Walker, and DeMar DeRozan.

Before the game, Spurs Head Coach Gregg Popovich said that he loved the pace that the young core played with. He said that playing quickly facilitates the teamwork and ball movement that helps this team thrive.

Popovich also noted that Derrick has been confidently shooting more three-point shots, which opens things up for the rest of the offense. He said that Dejounte was working on it, but Derrick seemed to be more confident.

"That's just another threat on the floor, and spreads everything out a little more," Popovich said. "One less defender that could be in the lane and clog it and help, so it's very important."

"If you don't shoot threes, you lose," Popovich said matter-of-factly. He also touched on positionless basketball, and the versatility of San Antonio's new starting lineup.

San Antonio isn't just playing faster, they're playing bigger too. Head Coach Gregg Popovich has held diminutive team leader Patty Mills out of these games while healthy, presumably to open up more opportunities for the younger players. Bryn Forbes is dealing with quad soreness, and he's out for today's game.

Popovich said he wasn't sure if Forbes would be back at all during the Disney restart. He said that Marco Belinelli will be out, and Mills will play this afternoon, mainly because of the injuries.

"He pulled a Manu Ginobili on me, locked me in a room, beat the hell out of me, and threatened me in many ways," Popovich said with his trademarked deadpan delivery. "With Bryn and Beli out, we need another body, so (Patty) really wants to fill that spot."

That trio of sharpshooters were consistently the weakest links on perhaps the worst defensive team in the Popovich era. This means increased roles for the young guys, especially Keldon "Big Body" Johnson who is already one of the team's best wing defenders.

Even rookie second-round pick Quinndary Weatherspoon will get some run after playing 10 pretty solid minutes in the Sacramento game. He looked a bit tentative, but made a few nice decisive plays on both ends as well.

"He's fun to watch," Popovich said. "I mean, his physicality, his toughness, his desire to win were all very impressive, and we liked what he saw."

Both rookies possess size and defensive ability that those aforementioned shooters never will.

The starting lineup now includes four guards, but all four are 6'4" or taller. Forbes has been replaced with White, an extraordinary defender who took five charges against the Kings and seemed to be the only player with a hope of guarding De'Aaron Fox, who dropped 39. White also put up 26 points, 8 rebounds and 5 assists in the win.

Speaking of momentum, White's fifth charge seemed to light a fire under the Spurs. After 46 minutes of battle, San Antonio led 114-112. As the much larger Richaun Holmes drove the lane, Derrick got in his way and planted his feet.

Holmes took off with no regard for physical safety, kicking White below the belt and elbowing him in the face, chipping his front tooth. White took it with a crooked smile, and whether it was formally discussed by the team or not, they decided there was no way they were going to lose the game after such a powerful display of warrior spirit. The Silver & Black closed the vital game on a 15-8 run.

"I've never seen a player take (five) charges in a game," Popovich said. "I'm still sort of amazed by it, I don't know if I appreciated it enough at the time, but that's pretty incredible."

The Spurs are on the right path, and will look to continue building their forward momentum against a young Grizzlies team that stands in the way of their 23rd playoff appearance in a row. Memphis is coming off an overtime loss to a Trailblazers team that now holds the coveted nine seed. If the Spurs win and Portland falls to the Celtics, San Antonio will move into that ninth spot, just two games behind the Grizzlies.

There are still seven games between San Antonio and a chance at the postseason, and nobody knows that better than the coaches and players. The bigger, faster Spurs will take on the task in front of them one game at a time, as they continue to build that momentum.