Observations, questions, and opinions on San Antonio's 121-108 loss to open the preseason 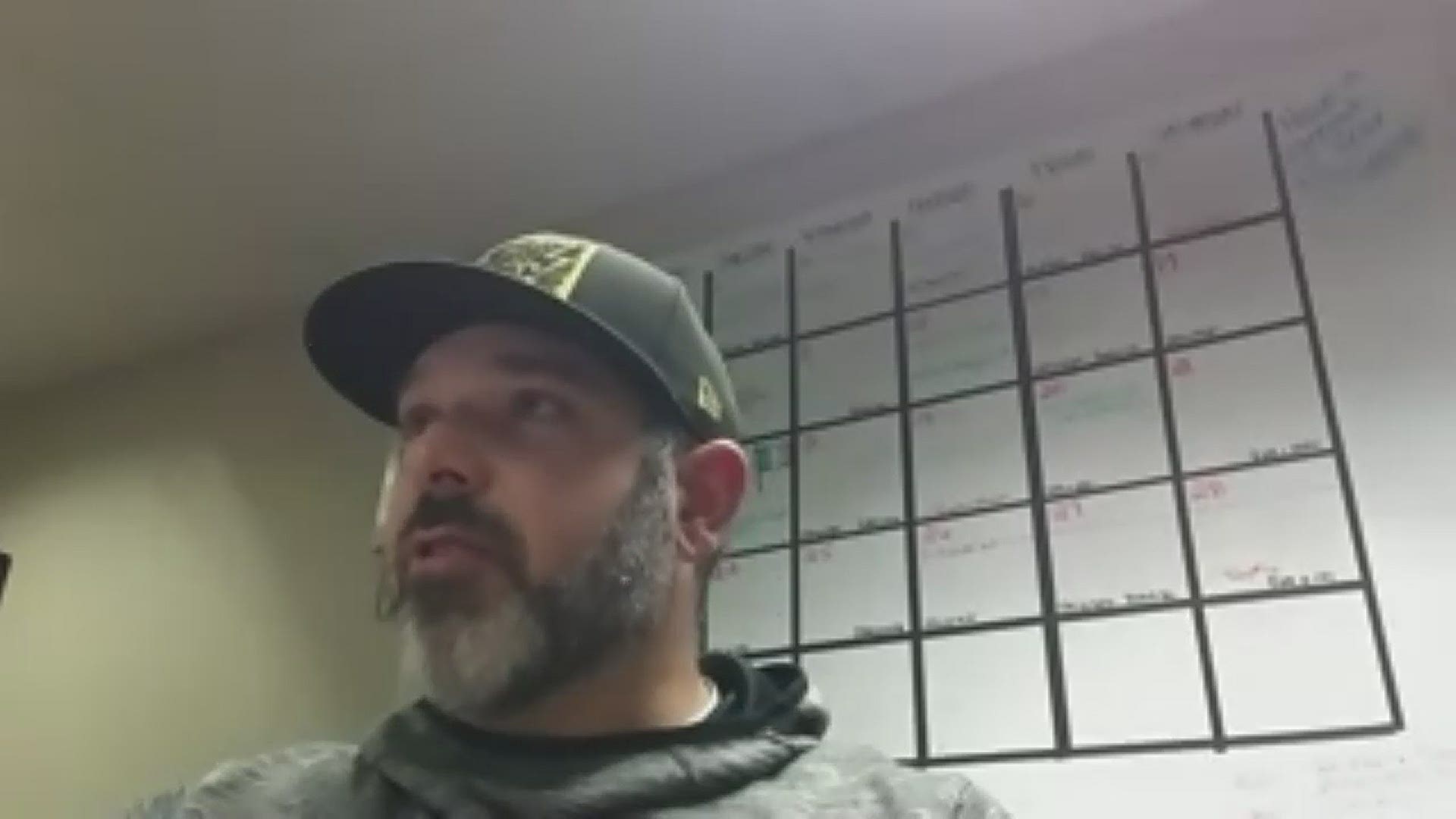 SAN ANTONIO — The San Antonio Spurs opened their 2020-2021 preseason on Saturday night against the depleted Thunder, and it definitely looked like their first game of the preseason as they lost 121-108.

Meaningless ugly loss aside, there were encouraging signs of growth from rookies and veterans alike for San Antonio. Still, some coaching decisions left many wondering how close this team will be to the one we all saw in Orlando.

San Antonio's longest-tenured player has been talking a lot this offseason about analyzing his game and being the best, most well-rounded player he can be. That version, of course, is the FIBA version, the MVP of a very good Boomers team.

As Mills said before the preseason tipped, he does a little bit of everything for that team. Against the Thunder, he showed that versatility and confidence to shoot from anywhere without worrying about it too much.

Mills attacked the rim, and hit mid-range jumpers, and seemed automatic from three. He led the team with 10 points in the first quarter, and finished with a team-high 24 on an efficient 9-16 shooting night.

This is where the Spurs need to make their money.

Patty said that when he's in that attacking mindset, he tries to read the defense and make the right play.

He kept the media waiting for his post-game comments, getting a lift in.

The 35-year-old big man has pledged to shoot more threes, and shoot more threes he did. It took a little bit for him to shake the rust off in his first game since March, but that didn't stop him from shooting it. He finished with 14 points and 6 boards and shot 3-10 from deep.

It's not the best percentage, but the volume is encouraging. In the first half there were some moments where he looked rough posting up, even struggling against Mike Muscala at one point. When he stuck to playing as a pick and roll/pop big, it opened things up for him and the rest of the offense.

Aldridge's ability to stick to that role and excel in it will be one of the Spurs' biggest drivers for success this year.

The rookie out of Florida State looked like every bit of a lottery pick in his 25 minutes off the bench, notching 12 points on 8 shots and 6 boards, 2 assists, a block and 3 steals.

He was mentally ahead, showing an impressive understanding of the game on both ends. From spacing the floor well (2-4 3PT), to making the extra pass, to jumping into the right spot defensively based on experience and knowledge, he already looks like a solid complimentary NBA player.

As for those steals where he seems to read the mind of the passer, he said it's all about seeing it and deciding if the risk is worth it. At 6'7" with a wingspan closer to seven feet, he has the tools to recover if his gamble doesn't hit.

ICYMI, Devin Vassell has what it takes to be a great NBA defender https://t.co/siDIn84Uq1

Shot creation is a part of his game that he's trying to grow, and he ran pick and roll out of the triple threat a few times with good results. If he can continue to improve there, he'll be special. Even if he doesn't, he'll probably find minutes in the rotation early this year.

Vassell is already more than a 3 and D wing
pic.twitter.com/fYUapRYcVF

After the game, Pop said that he was a competitor who plays the game wisely, which sums him up nicely.

Why was the first half so bad?

When I asked Pop a version of this question, he very flatly said that they scored a million points. It was 73, but point taken.

So why did OKC's skeleton crew get buckets so freely? It boils down to a few things. Obviously it was the first game of the preseason, and it showed on some boxouts that never came and other fundamental areas of the game that were sluggish and sloppy out of the gate.

It’s ugly and bad but it’s also whatever 🤷🏻‍♂️ https://t.co/swrEXTbmZO

With injuries to Derrick White and Keldon Johnson, San Antonio is missing two of their most impactful defenders. That led to some interesting lineups early, and they didn't seem to align with the stated goal of building on the pace and space of the bubble.

What was up with the starting lineup?

Coach Pop rolled out a starting lineup of Dejounte Murray, DeMar DeRozan, Rudy Gay, LaMarcus Aldridge, and Jakob Poeltl. It's a far cry from bubble ball, where DeMar DeRozan played at the 4 and Rudy Gay played mostly at the 4 and some at the 5.

That unit opened the preseason with some pace and defense, but didn't seem to have the right personnel to keep up on the perimeter. There were several points in this game where the Spurs appeared too big to match up, playing three guys who qualify as modern big men. It didn't go so hot, especially defensively.

The rotation got a bit less clunky in the second half, and the defensive rotations were better as a result. Trey Lyles and Devin Vassell started the second half for LaMarcus Aldridge and DeMar DeRozan, who came in off the bench.

It was weird to see Cam Reynolds get nearly as many minutes as Lonnie Walker IV.

What matters from this game, and what doesn't?

The final score, 121-108 OKC, is the thing that matters least. The general sloppiness and lack of attention to detail, especially in the first half, is about as easy to write off in the first game of the preseason, though some guys will have rough film sessions.

Dejounte Murray struggled in this game, shooting just 2-11 from the floor with a mix of bad misses and bad decisions, turning it over three times as well. He added 7 boards, 4 assists and 3 steals, and he looked sharper in the second half.

Trey Lyles also shot poorly at just 1-9, but that'll happen. It's not a huge deal for either of them, but they both need to work on being consistent.

The lineup and rotation, though confusing to people who have heard a lot of "build on the bubble" talk, doesn't seem like it will last. Derrick and Keldon will return sooner or later, but balance will be something to keep an eye on moving forward.

The early integration of the rookies and Luka Šamanić might be temporary, but it matters for their development. The growth of LaMarcus Aldridge and Patty Mills might wind up mattering a lot for this team, especially as they try to up the volume from downtown.

Both rookies can contribute this year

Devin Vassell jumped off the screen and the stat-sheet as an immediate difference maker for this team, but don't sleep on Tre Jones. His numbers weren't all that impressive in seven minutes of play, but he looked poised on offense and pesky on defense.

Last year's ACC Player of the Year and Defensive Player of the Year seemed to mesh well early with Vassell. The familiarity from their days facing off in Duke and FSU uniforms may contribute to an understanding of how the other plays, and they made a few nice connections in their short time together on the court.

The kids have some growing to do, but they can both be contributors off the bench to start this season. Vassell may play himself into a bigger role, because it's hard to imagine Pop watching the tape and not gushing over how sharp, smart, and impactful he looks.

Rudy Gay is still good, but better used as a modern 4 or 5.

At 34, Gay talked this offseason about slimming down and focusing on mobility. That's important for him as he hopes to extend his career, but still doesn't make him a great fit at small forward in today's NBA.

At the 4 or even 5, Gay can use his big frame to limit opportunities at the rim. When he gets caught in space on the perimeter, that's when it becomes a problem.

Gay scored 15 points and hit three triples, both of which are welcome contributions after he looked like a new and improved man in the bubble. Still, the lineups with him at the 3 looked slower and worse defensively. He can still make all of those contributions at more of an ideal position for him and for this Spurs team.

On a related note, Aldridge should mainly play the 5. DeRozan can play the 2, but he should be paired with a 3 like Keldon or Devin.

Coaching adjustments are needed to get back to bubble ball, and get toward this team's potential.

Coach Popovich and all the players have talked this offseason about building on the bubble, playing faster and younger and shooting more threes.

It's clear that those principles have been embraced by the players, who launched 38 triples and hit nearly 40% as a team. With 11 steals and 6 blocks they were disruptive on defense, if not reliable. They played as fast as they could, sometimes a little faster than they should have.

Even with the injuries, even in the preseason, starting three guys in their 30's and three big men will raise questions about Popovich's commitment to the small-ball youth movement.

If Pop had any serious thoughts about playing the rotation like this in the season, the tape from the first half in this one should scuttle that pretty quickly.

The Spurs have all the pieces they need to be competitive this season. Saturday night's preseason opener was another good reminder of how not to use them.