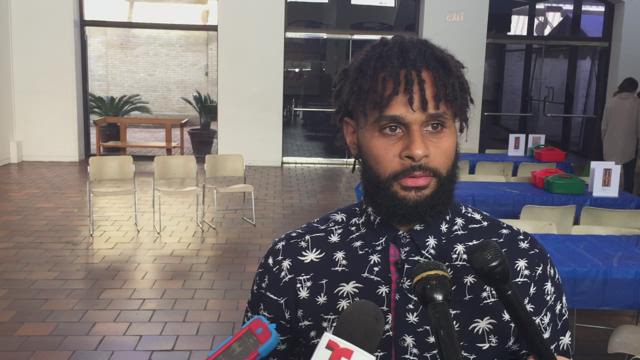 Spurs guard Patty Mills never has been one to get rattled in the heat of a game.

His poise extends off the court, too, as he demonstrated Monday when he was asked about the racial taunting he was subjected to late in Sunday's victory over the Cavaliers in Cleveland.

"It's always a learning lesson, I guess," Mills said during an appearance for a Black History Month event at the San Antonio Museum of Art. "Last night's incident is something that's not new to me. I ignored a lot of stuff growing up as an indigenous Australian, and over here in the NBA as well. But last night's incident was just a mere example of stuff that still exists in sports today."

Courtside microphones picked up the voice of a spectator at Sunday's game shouting at Mills, who was at the free-throw line with 2:29 left in San Antonio's 110-94 win over LeBron James and the Cavs.

"I think it's fair to say that I've been called a lot worse," Mills said Monday, managing a thin smile. "But like I said, it was a small example to shine a little bit of light on the fact that racism still does exist in sports today, and that we as a whole can do a lot more to be able to be in a situation like today and help educate kids to be able to be proud of who they are and where they come from, and have the feeling inside to be able to express all of that."

He also discussed his children's book "Patty Hits the Court Game Day!" and gave signed copies to the children after a Q&A session. Mills also gave all 75 students tickets to a Spurs game and led them in a "Go Spurs Go" chant before they left the museum.

"But I've been over here now with the Spurs for seven seasons, and for me to be in this community, I've also seen how important it is for me to be a role model for these kids, for blacks, Hispanics, minorities throughout the San Antonio community. It's something I've taken a lot of pride in and something that I enjoy doing."

Mills, 29, responded to the taunts via Twitter when a Twitter user sent him a video of the incident. Mills referred to the man who taunted him as a "confused, hateful fan."

"I am a proud Islander," Mills tweeted. "Like my Jamaican Brothers, me and my family in the islands of the Torres Strait have experienced racial slurs for decades. Hope your efforts will enlighten this confused, hateful fan."

Mills scored 11 points on 3-of-9 shooting, including 2-of-6 from beyond the arc. His second three-pointer was the 657th of his career with San Antonio, moving him past Matt Bonner for No. 4 on the franchise's list for threes made. Mills, who played 35 minutes, also finished with five assists, two rebounds, and one steal.

Green finished with 22 points and nailed 5 of 9 three-pointers. LaMarcus Aldridge led the Spurs with 27 points.

The Silver and Black snapped a four-game skid with their victory over the Cavs. The game was the last of the team's annual Rodeo Road Trip.