The Spurs kept it close and showed promise, but couldn't match Denver's size. They fell to 2-2 in the bubble, and took another step back in the playoff hunt. 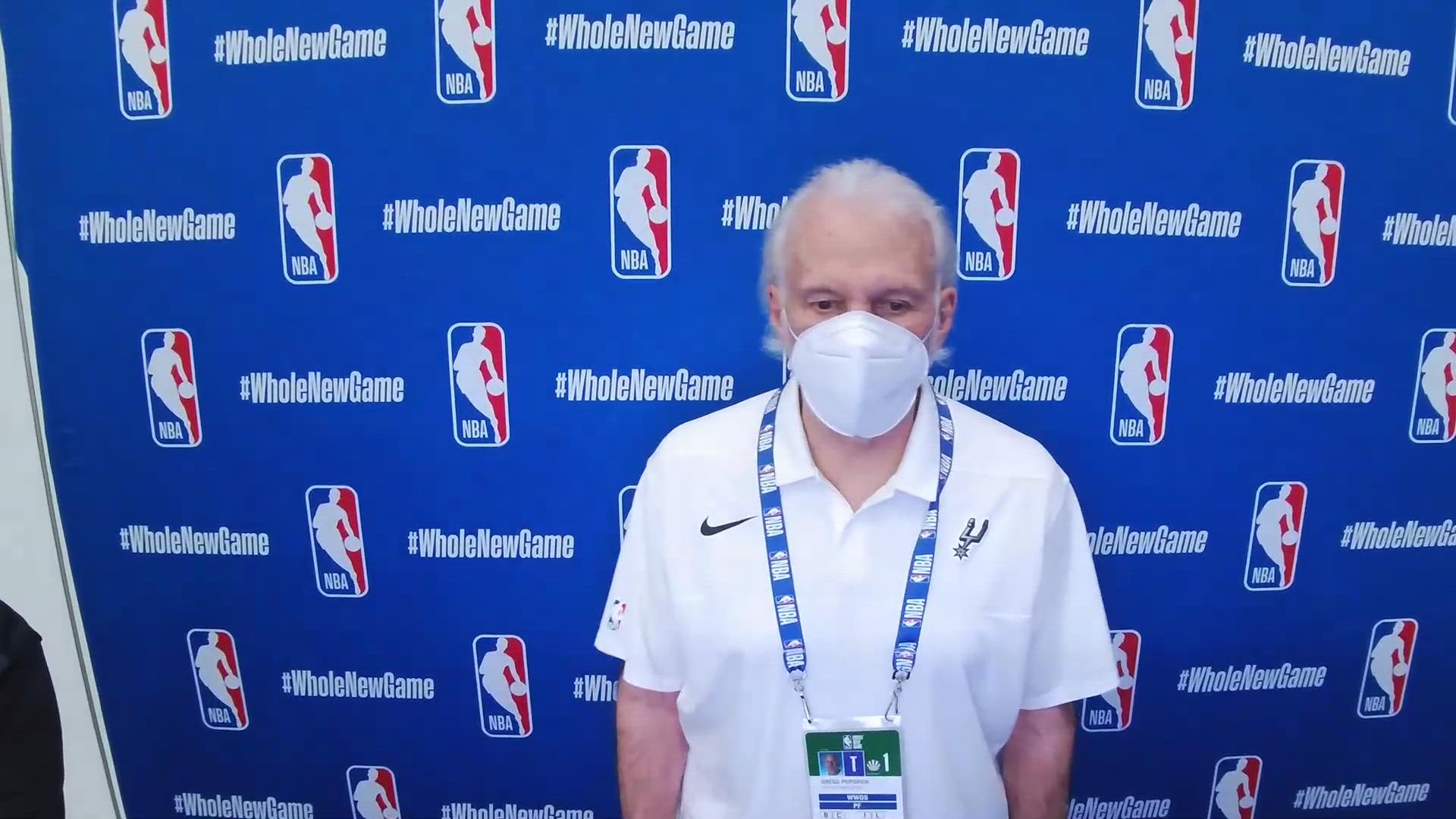 ORLANDO, Fla. — The story below will be updated throughout the game with highlights and analysis.

Marco Belinelli will be available after missing the last game with a sprained foot. Before the game, coach Gregg Popovich said that after sitting the first few games, Patty Mills has worked his way back into the rotation.

Popovich noted that with four guards, gang rebounding is going to be key, especially against a disproportionately tall team like Denver.

San Antonio immediately struggled to match the length of Denver, as rookie Michael Porter Jr. scored 10 points out of the gate. His height and high release point didn't really matter, as he was left open for several of the shots.

Mills hit a two three pointers and a transition layup, Drew Eubanks gently placed a couple of errant shots into the basket, and Keldon made an impact with his hustle and size.

DeRozan turned it over twice to start and looked sloppy with the rock initially, but came back into a five-point game and helped tie the game. Rudy Gay helped too, continuing his solid scoring in the bubble with 8 first-quarter points.

Rudy Gay has been a 3-point assassin in the bubble pic.twitter.com/5PzkKNXHvm

San Antonio trailed 32-28 at the end of the first.

Denver pushed the lead to 45-35 early in the second quarter, but Derrick White helped get San Antonio back in it. He hit a three, took a charge on Porter, then pumped at the arc before driving and hitting an and 1. Then he hit another tough layup.

“If he shoots ten threes in a game, I’ll be happy”

-Pop on Derrick White before the game
pic.twitter.com/jImM64AwNb

He dropped a dime to Drew for a layup and Rudy Gay hit another jumper to tie the game as Denver's shooting went cold. The Spurs got a 55-53 lead on the next play when Patty Mills snaked around a screen, made it to the elbow and hit a jumper.

Toward the end of the half, Nikola Jokic drove through the Spurs for an and 1, or so it seemed. Popovich challenged the play, and the refs changed it to an offensive foul. On the next possession, Keldon spotted up for three in the corner and gave the Spurs a 65-62 lead that they took into the locker room.

Keldon Johnson knocking down this shot consistently is one of the best parts of the Spurs bubble run so far pic.twitter.com/ITFfainAp5

San Antonio opened the second half on a 6-0 run. Walker drilled a three, and when he missed another, Poeltl got the ball back to DeMar for a foul and a free throw. Dejounte Murray got a steal and a layup, and Denver took a timeout down 71-62.

They executed out of that timeout and went on a run of their own, getting all the way back to take a lead late in the quarter. Poeltl struggled to finish strong in the paint, and DeRozan picked up a technical foul after arguing a few no calls.

Jokic stepped out and hit a few threes, and by the end of the quarter, the score was tied at 89.

It was a back and forth battle to start the period with more solid play from Gay, but after three pointers from Jerami Grant and MPJ, Pop took a timeout down 103-97 with 7:36 remaining.

Keldon Johnson hit a shot and a layup and got a rebound, bringing that energy and physicality that he's known for.

Keldon drilled a corner 3 to cut the score to 120-114, but when he went for a rebound on the other end, he tipped it to MPJ. Some soft foul calls didn't help the Spurs. DeMar, Derrick and Keldon all played well in the final minute, but it was too little too late.

The Spurs lost, dropping to 2-2 in the restart and falling a step back in the increasingly tight race for the final playoff spot in the West.

After the game, White said that Porter got into a rhythm early, and did a good job of mixing up his offensive attack with interior and perimeter play. He acknowledged that it was tough to keep Denver off the glass, as they out-rebounded the Spurs 46-35.

Denver shot 55% from the floor and 39% from three, and White acknowledged after the game that the perimeter defense could have been better.

The Spurs are now in the tenth seed with the same record as New Orleans, two games behind Memphis in eighth and a game behind Portland in ninth.

Let’s discuss the game and the consequences https://t.co/qwhX8XDk7r