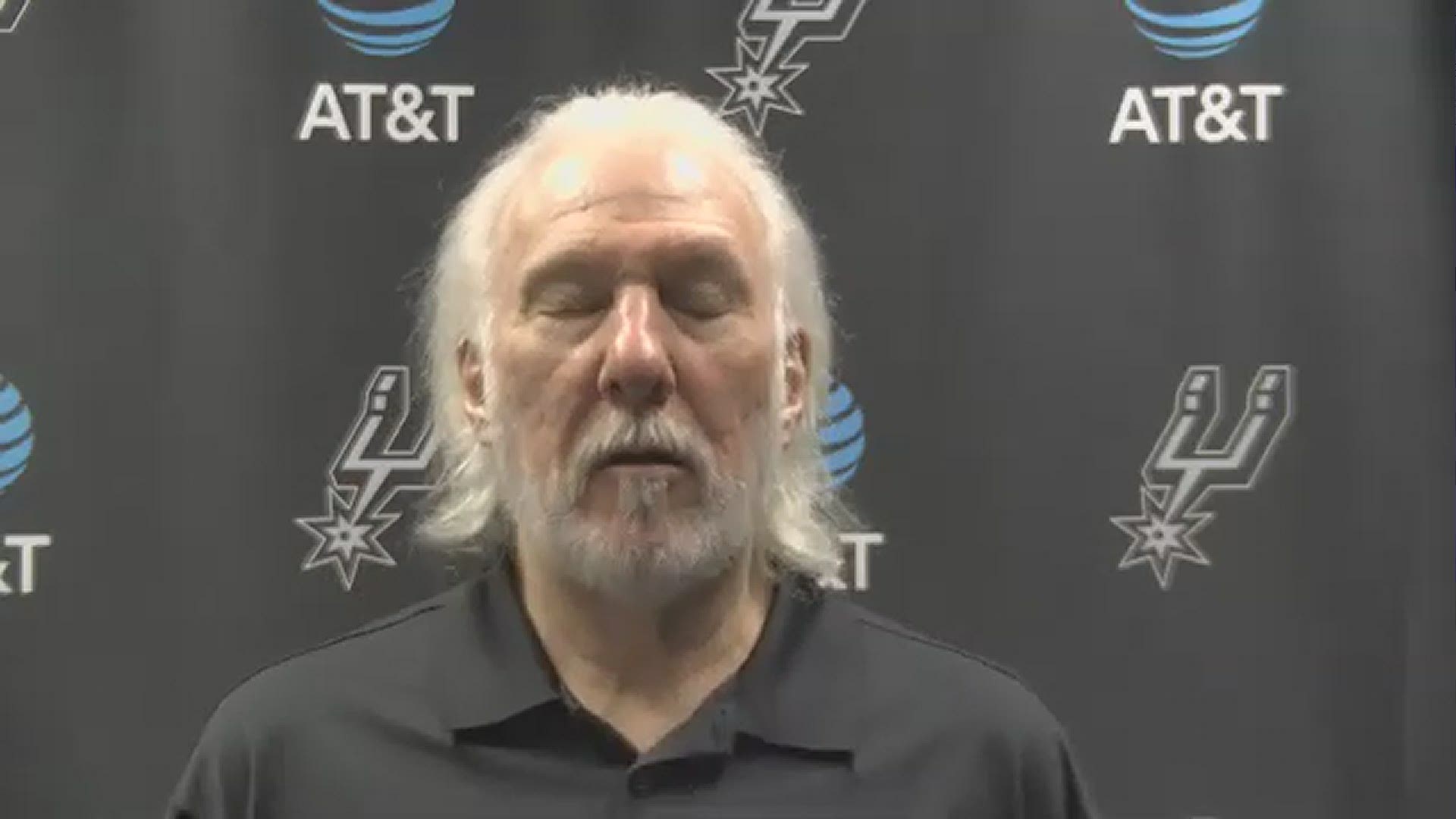 SAN ANTONIO — The Spurs played one of their best games of the season, beating the red-hot Milwaukee Bucks 146-125.

San Antonio set a franchise record with 87 first-half points and tied their season-high for scoring, but that came a few weeks ago in an overtime win. Six Spurs scored at least 19 points, the team won the rebounding battle after losing it the previous game, and they shot an absurd 17-29 from three.

DeMar DeRozan, DeJounte Murray and Lonnie Walker ran a lot of offense with great success, Keldon Johnson showed no fear against Giannis Antetokounmpo, Jakob Poeltl finished with a career-high in assists, and Rudy Gay and Patty Mills both played fantastic games off the bench. 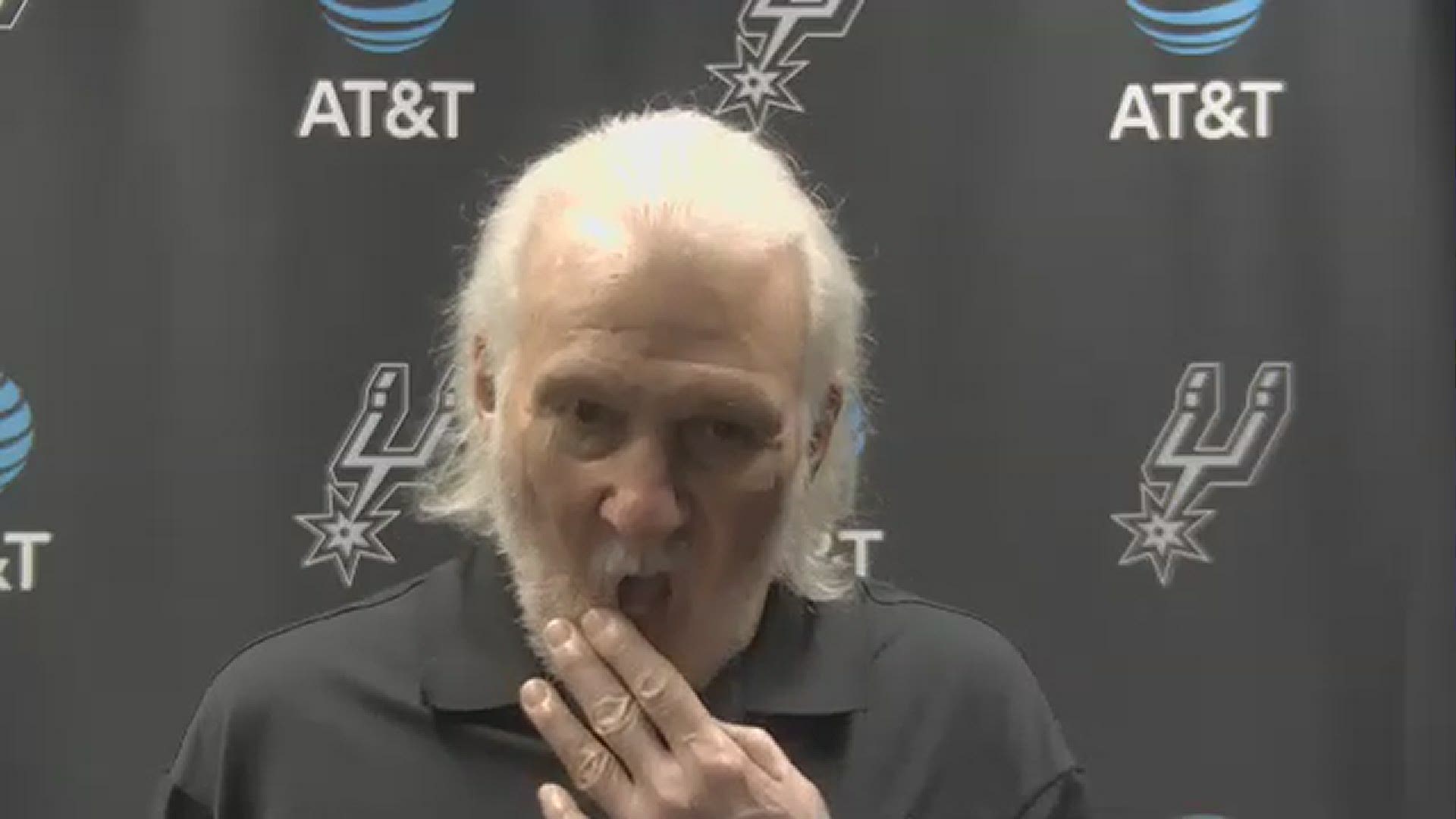 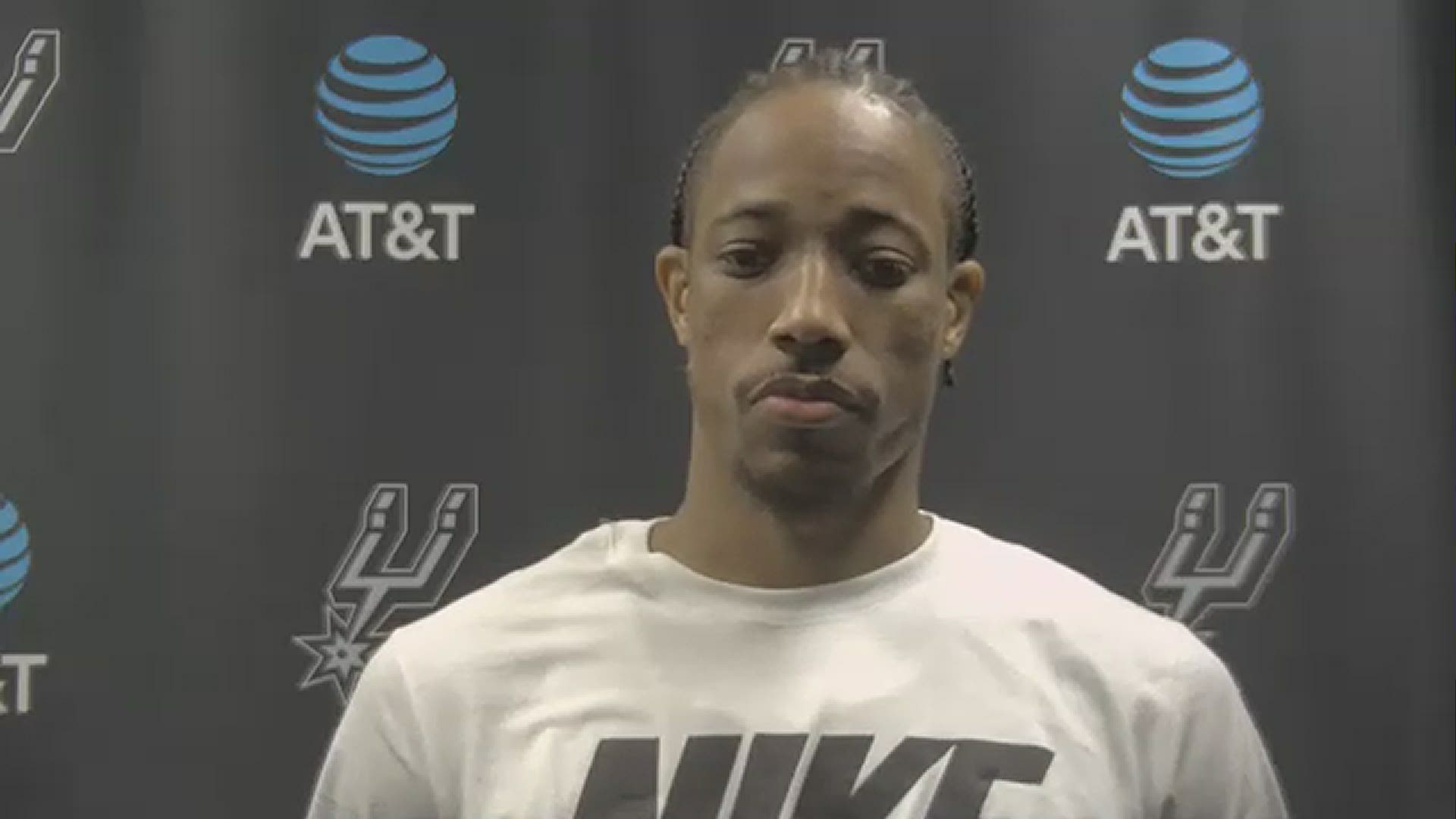 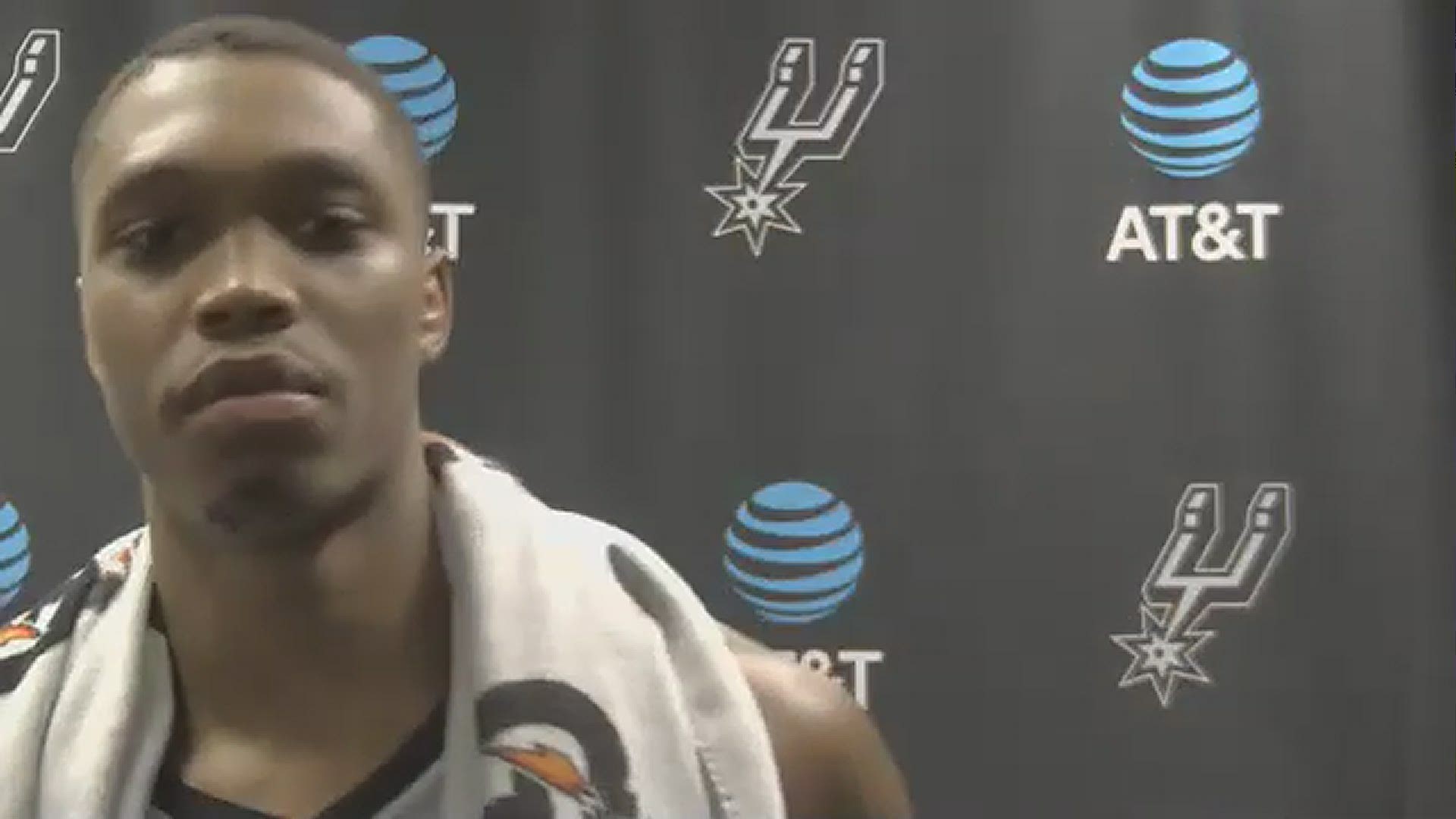 San Antonio's offense continued to click starting the fourth quarter with interior makes from Dejounte Murray, Rudy Gay, and Keldon Johnson. Lonnie Walker IV used a pick and roll to clear Bryn Forbes and get an open jumper, then ran the same play for a three.

Giannis did his best to get the Bucks back in it and made a few shots.

Keldon continued to attack Antetokounmpo, driving through his chest for free throws. DeMar DeRozan drove, spun, pumped, and put it in to give the Spurs a 129-106 lead with 6:37 to play.

San Antonio built their largest lead of the game at 25 points behind strong, attacking play from Lonnie Walker IV and Keldon Johnson.

Giannis responded with an 8-0 run to cut it to 17. DeMar DeRozan looked like he took an elbow to the back of the head from Brook Lopez and stayed down for a bit. He got back up and made a strong driving layup a few possessions later.

It was good to see DeMar do this after he looked like he took an elbow to the back of the head pic.twitter.com/lKV7DQ3unW

An extended 14-2 run by Milwaukee cut San Antonio's lead to 103-89 before another three by Patty Mills to slow the bleeding.

Rudy Gay grabbed a steal, Jakob Poeltl slammed a dunk, and Patty drained another three. Poeltl notched a few big blocks at the end of the quarter, and San Antonio went to the fourth up 113-93.

Jakob Poeltl rolled for a layup, then Murray pulled up for yet another free throw line jumper to make it a 20-point lead. Murray poked a steal loose, then found Patty for his fourth made triple of the game, giving the Spurs a 72-49 lead with 5 minutes left in the half.

Poeltl found Lonnie Walker IV on a back-cut for an easy layup. Milwaukee cut their deficit to 18, and Pop took a timeout.

Lonnie ran pick and roll at Bryn Forbes, taking and making a wide-open three. Keldon drove in and stuck with it for a tough finish at the rim, DeMar DeRozan hit a jumper, then free throws, then posted Forbes for an open layup. He got another free throw, and sent the Spurs to halftime up 87-64.

Highest scoring half in Spurs history, 87-64 over Milwaukee

It was the highest scoring first half in Spurs history.

San Antonio's offense came out of the gate clicking. Keldon Johnson started by drawing a foul on Giannis Antetokounmpo, then finished a putback.

Dejounte Murray ran pick and roll for a free throw line jumper, then he found Jakob Poeltl underneath for a scoop and-1 through Giannis, his second in the first two minutes.

A huge deal that Jak is making these and the subsequent free throw pic.twitter.com/wlEYC6nzAm

Keldon drove again and drew help defense before kicking it to Murray for a buzzer-beating three. Johnson ran pick and roll and finished a pretty scoop layup, then Lonnie Walker IV grabbed a block by Poeltl and took it for a transition finger roll.

Murray ran another pick and roll and got another open mid-range jumper, and he drilled it. DeMar DeRozan pumped in the paint, got his man in the air, jumped into him for the foul and hit the shot. Then he posted up PJ Tucker, backed him down, and hit the shot over him off glass.

Johnson knocked down a catch-and-shoot triple. Walker, who had a career-high 31 points against the Bucks the last time they played, drilled a three.

Patty Mills drilled a corner three on his first attempt, then got another three from the top of the key. Rudy Gay drained a mid-range, then pulled up for three and swished it.

San Antonio led 45-36 after an explosive first quarter where they hit 6-8 from deep as a team.

The Associated Press contributed to this report

BOTTOM LINE: Milwaukee seeks to prolong its five-game win streak with a victory against San Antonio.

The Spurs are 13-20 in home games. San Antonio is ninth in the Western Conference with 24.4 assists per game led by DeMar DeRozan averaging 7.1.

The Bucks are 19-14 in road games. Milwaukee ranks second in the Eastern Conference with 14.4 fast break points per game led by Giannis Antetokounmpo averaging 4.8.

The teams meet for the second time this season. The Bucks won 120-113 in the last matchup on March 20. Antetokounmpo led Milwaukee with 26 points, and Lonnie Walker IV led San Antonio with 31 points.

Khris Middleton leads the Bucks averaging 2.3 made 3-pointers while scoring 20.4 points per game and shooting 42.7% from beyond the arc. Jrue Holiday is averaging 7.7 assists and 19 points over the last 10 games for Milwaukee.

San Antonio dropped six of their last seven games as the schedule got brutally difficult right when they lost Derrick White to an ankle injury.

The Spurs were underdogs in all of those losses, and they're 7-point underdogs tonight facing a Milwaukee Bucks team looking for their sixth win in a row.

Former Spur Bryn Forbes makes his return to San Antonio riding a hot streak after finding a perfect niche in Milwaukee. He's hitting 45% from deep as a sniper off the bench, a role that maximizes his strengths as a shooter and minimizes his exposure on the defensive end.

Patty Mills spent years mentoring him in that role, and the two may match up tonight. Mills has had a difficult slump for over a month, shooting 33% from the floor since late March.

And it's been quite a SLUMP:

That number sits in the bottom 6th percentile in the NBA over that stretch.

Mills looks tired out there, and that would be understandable given that the Spurs haven't had more than a day off as a team since the All Star break.

San Antonio still controls their own destiny in terms of making the play-in tournament, but even if they don't secure the three wins in five games that they'd need to secure tenth on their own, that number goes down one every time the shorthanded Pelicans lose.