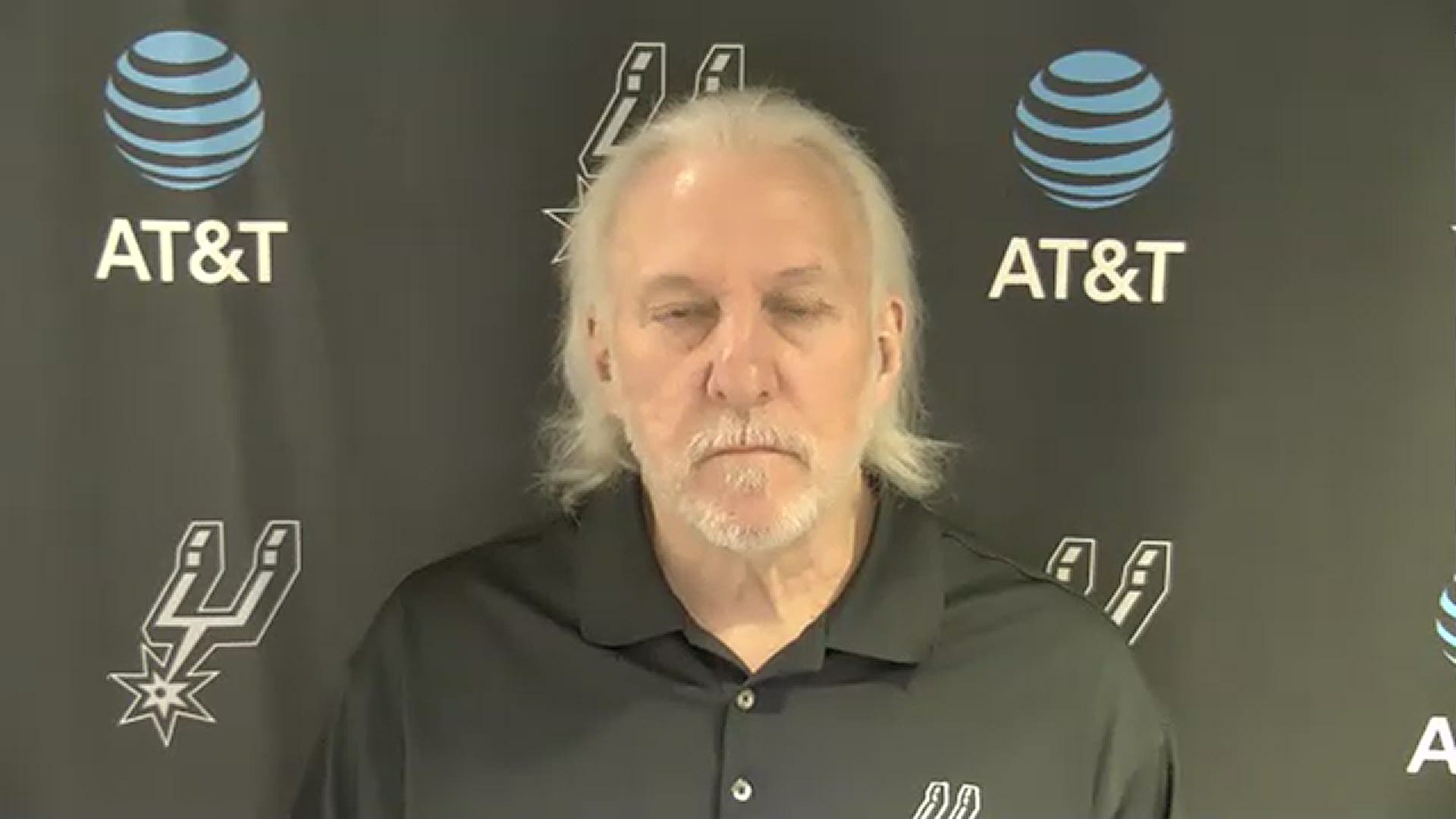 MIAMI — The Spurs gave the Heat a good fight in Miami, but collapsed late in the third quarter and couldn't get enough stops late to turn a 37-point fourth quarter into a win.

San Antonio fell 116-111 and dropped to 31-30 on the season as they jockey for positioning in the Western Conference play-in. Dejounte Murray led the way with a 22-point triple double, DeMar DeRozan added 20 points and 8 assists, and Lonnie Walker IV added 18 points after Coach Pop said he wanted to keep him coming off the bench in a Manu-type sixth man role. 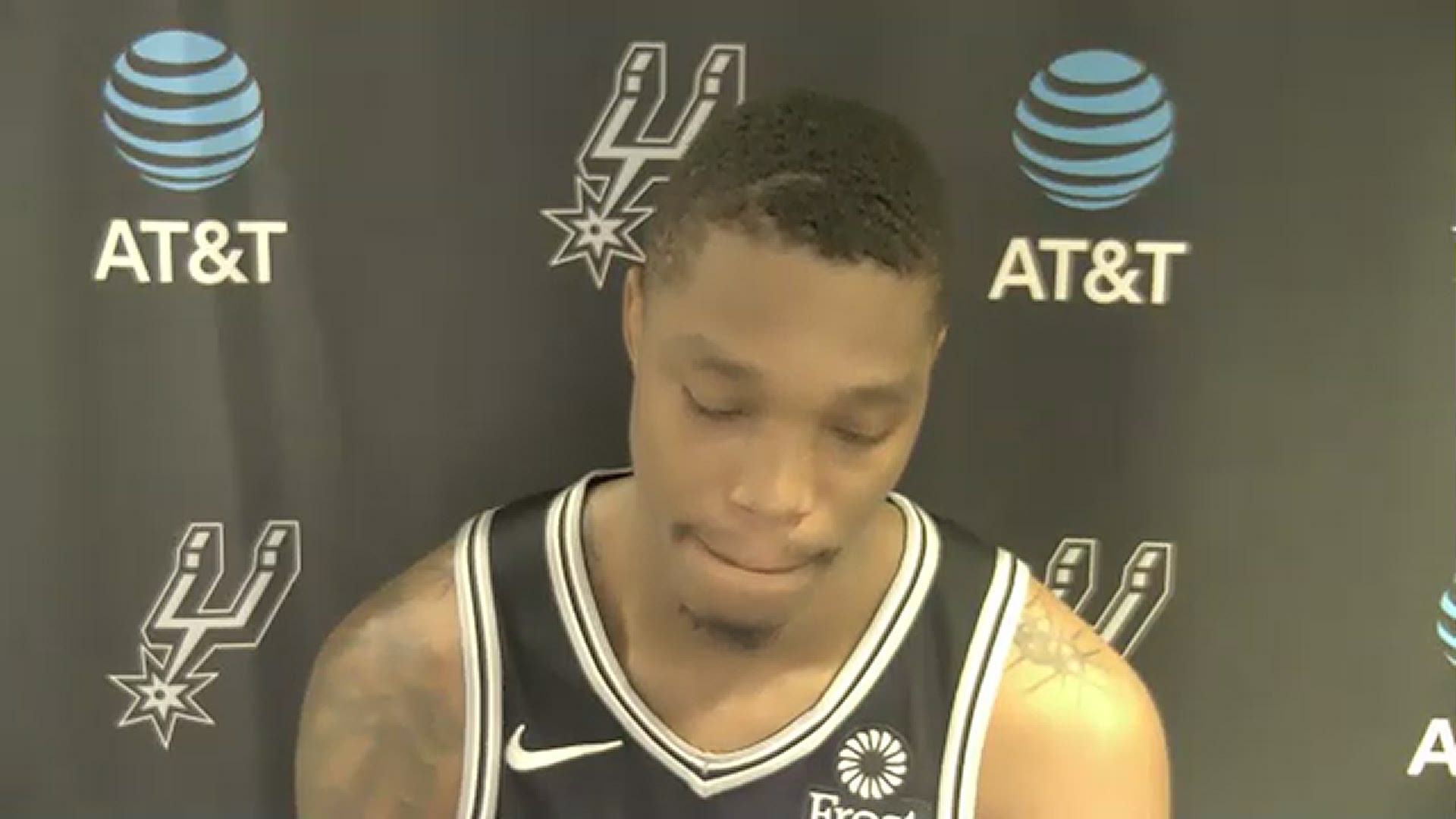 Devin Vassell started slow replacing the injured Derrick White in the starting lineup, but scored all 11 of his points in the second half. 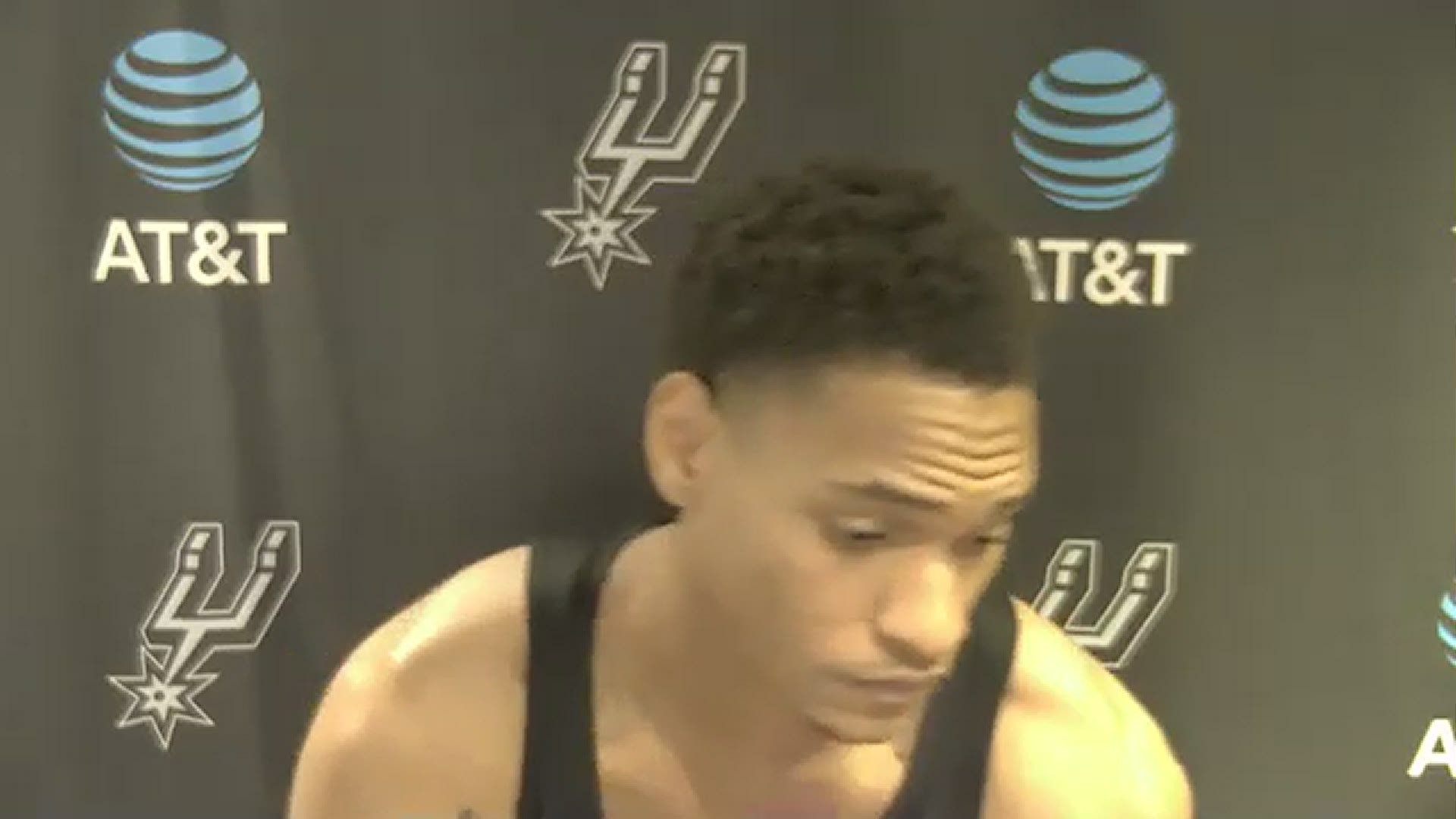 Jimmy Butler and Bam Adebayo put up beastly performances for Miami and scored at will down the stretch. Kendrick Nunn, former San Antonio draft pick Goran Dragic, and former Spur Dewayne Dedmon each put up 18 in the win.

It was another one of those games where the Spurs didn't execute quite well enough to win on either end, but they earned praise from their coach for the consistent effort. 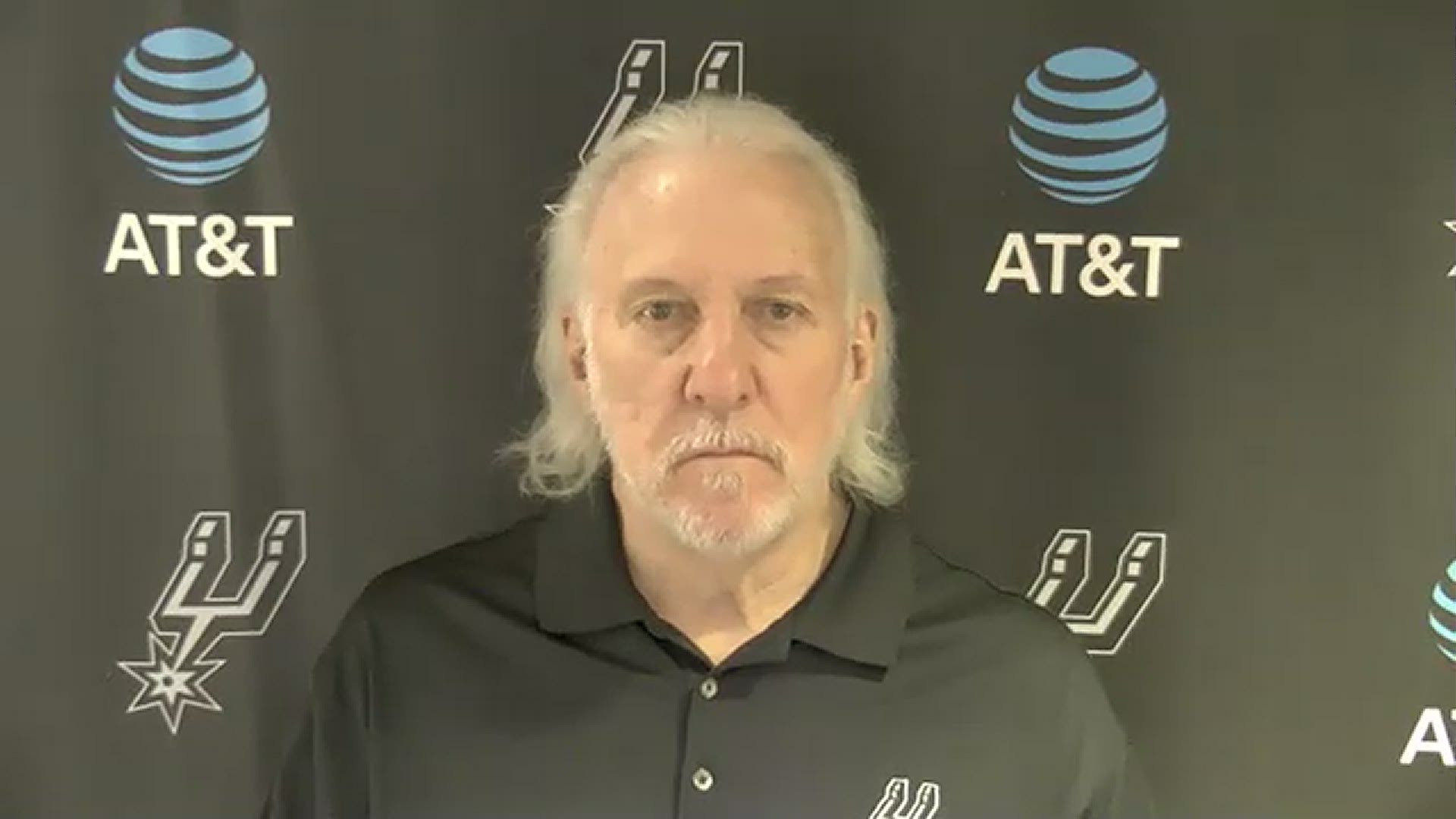 "I love this group, it's the best part of what we do," Gregg Popovich said. "They might go through bad periods for three, four, five minutes, but they keep playing, they don't give in. We're just trying to reduce mistakes, get some more experience for some guys, and it's paying off slowly but surely. They did a fine job, we made a few too many mistakes, we had some open threes that they executed really well and didn't fall, that's basketball."

The spurs scored six in a row behind Rudy Gay and Lonnie Walker IV, cutting their deficit to four and getting an early timeout from Miami.

Goran Dragic came out of that and hit a three and a floater to extend the Heat lead back to nine. Dejounte Murray drove in for a layup, but Duncan Robinson answered with a contested three.

Murray drove and kicked to Devin Vassell in the corner, who drilled the three despite getting fouled.

Vassell got back to the line and hit one. Dragic hit a paint floater over tough defense, and Murray answered by carving his was to just inside the free throw line for a jumper.

Poeltl stripped Adebayo under the basket, and Murray used a pick and roll to get to a baseline floater to cut it down to six.

Adebayo got more free throws with a nice pump fake. Dejounte went at him on the switch, drove past and laid it up with the right for an and-1

DeRozan posted up, spun, and used that pivot to finish over Bam. Butler scored on an offensive rebound.

Keldon Johnson got his own second-chance layup, but Butler drove in for another and-1 to push the lead back to nine. DeRozan attacked Butler and got to the stripe with 4:30 left, making it 106-99 Heat.

Kendrick Nunn hit a catch-and-shoot three off a feed from Dragic to put Miami up 10, drawing a Pop timeout with 4:15 to play.

Lonnie kicked to Keldon, who dribbled in for a mid-range jumper he swished. The Spurs finally got a stop, but couldn't convert on the other end. Both defenses stepped up.

In transition, Murray found a slashing Lonnie who finished through contact, hit the roll and the free throw, and cut it down to five. After another stop, Murray made a strong drive in to make it one possession.

Murray got shoved into Jimmy Butler, a foul against the Spurs that sent Butler to the line.

Poeltl caught a pass from DeRozan under the basket and laid it in on a reverse to cut the Heat lead to three again.

The Spurs played solid defense, then dodged a corner three after a near turnover. Bam got the ball, and went bam for another and-1.

DeRozan drove in, kicked to Rudy Gay, and Gay drained the triple to halve the lead.

The Spurs needed a stop desperately, and Poeltl closed out on a Jimmy Butler jumper too aggressively, sending to the line up three with 20.8 seconds left. Pop challenged, but it was unsuccessful.

Miami built their lead out to five before DeMar DeRozan posted Jimmy Butler up, turned baseline and used his pivot foot to scoop a layup. Keldon Johnson finished a driving layup, and Dejounte Murray got to the line for free throws.

DeMar drove and kicked to Devin Vassell, who pumped at the arc, dribbled in and drilled a mid-range jumper.

Pro move from Vassell, need that as a 3-point threat at this level pic.twitter.com/donughJcCa

DeMar fed Murray in the corner for three, and he drilled it. Then Murray ripped a steal and bounced it ahead to Vassell for a dunk.

The defense started clicking, and the Spurs took a 71-65 lead as Miami went over four minutes without a made basket. They finally broke that streak on an offensive board.

DeRozan drove, whipped it over his head across the court to Vassell in the corner for three and a seven-point lead.

Former Spur Dewayne Dedmon got another putback, hit the free throw, and got to the line again to tie it at 74. Jimmy Butler got the switch on Patty Mills, posted up and untied it. Dragic hit a corner three and a few free throws to make a 15-0 run to end the quarter.

The Spurs trailed 82-74 heading to the fourth.

The Heat came out in a zone, and on the first possession Lonnie Walker IV hesitated when he caught it open at the arc. The ball found Patty Mills who drained a wing three.

The next trip down Walker got it in the same spot and swished it. Rudy Gay hit a tough jumper to make it an 8-0 run to start the quarter, cutting an 11-point lead down to just three.

Bam Adebayo responded with two buckets inside, and Pop called timeout down 35-28.

Lonnie Walker IV drove to the hoop and finished at the cup, the Spurs got another stop, and Jakob Poeltl put back a missed three to make it a one-possession game.

Adebayo picked up two offensive fouls on back-to-back possessions, one on a hook he got away with earlier in the quarter and another on a charge against Poeltl.

The Heat challenged successfully, making it the third foul on Jakob Poeltl instead.

DeMar DeRozan came back in and hit a mid-range jumper to cut it to two. Adebayo answered with an alley-oop finished, but Lonnie drilled a step-back and then a three to put the Spurs in front 39-38.

It went back and forth, and DeRozan eurostepped in through a defender for an and-1 that just rolled in.

Keldon Johnson finished inside, and DeRozan finished a physical post-up to put San Antonio up 6.

Miami responded with an 8-0 run to go back in front, but the Spurs got the lead back.

San Antonio played perfect defense on the final possession, but a desperation three bounced in off the glass to beat the buzzer.

San Antonio got out to a rough start with some sloppy turnovers and unfocused defense. Miami took a 11-4 lead, drawing a timeout from Coach Pop.

Jakob Poeltl picked up a soft foul on the first possession, then charged for his second and went to the bench less than five minutes into the game.

The Heat built their lead to 15-6 before DeMar DeRozan backed his guy down to the ground in the post and finished inside. The defense improved, and DeRozan drew a few fouls, grabbed a steal, and dished it to Drew Eubanks who pumped and finished at the rim.

The Heat came out of the timeout with a few quick buckets to push their lead back to nine before Keldon Johnson drove in and got free throws. After three more against an unsettled defense, Miami built their lead up to 27-13

Miami's zone forced the Spurs into tough shots, but Dejounte Murray, Lonnie Walker IV, and Rudy Gay each knocked one down one after the other.

Jimmy Butler finished the first quarter with 9 points, pushing the Heat to a 31-20 lead after the first.

The Spurs have an insanely-difficult 12 games between them and a postseason bid, and they may have to complete the journey without one of their best two-way players.

Coach Gregg Popovich announced before his team played the Heat in Miami that he didn't expect Derrick White to return this season after spraining his ankle in Monday night's win over the Wizards.

It's awful news for White and a huge blow to this team, especially in terms of three-point shooting and defense. Popovich said he'd role with rookie Devin Vassell in the starting unit, and he brings both of those skills at a high level.

"I think that Devin (Vassell) will start, so we can keep Lonnie in his role that he's playing now coming off the bench kind of like Manu did for us, to give us that little bounce," he said.

White's return to the lineup resulted in a slashing of Vassell's minutes despite his production, but now he's poised for more.

"When he gets minutes, he's played well. When he gets fewer minutes, I think the rookie part comes out, where he's probably more in a little bit of a hurry, presses a little bit, wants to do something good, doesn't want to make a mistake," Pop said. "In this situation he will get more minutes, so I expect him to develop very well."

San Antonio will need shooting from him, Walker, and anybody else if Miami goes back to the zone defense that they run more than anyone in the league. It's especially effective against teams with reluctant shooters, and it's the main reason the Spurs managed just 87 points in a 20-point loss when these teams faced off a week ago.