The shorthanded Spurs mounted a furious comeback in the fourth quarter, but came up just short in a 132-130 loss to Philadelphia. 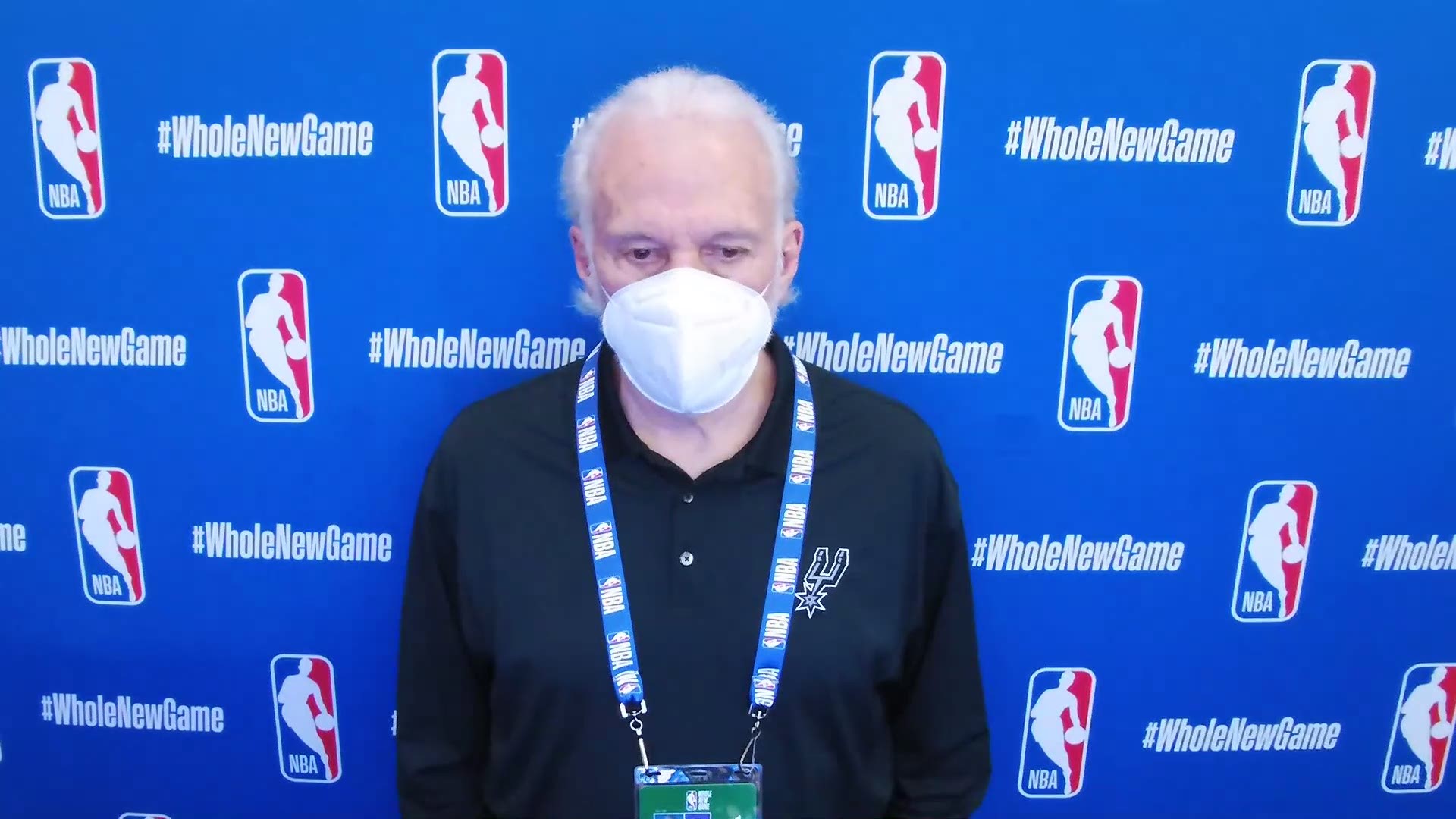 ORLANDO, Fla. — The shorthanded Spurs mounted a furious comeback in the fourth quarter, but came up just short in a 132-130 loss to Philadelphia.

It came down to Joel Embiid, the Sixers making too many open threes, and a few tough breaks for San Antonio. Officials missed a shot clock violation late in the third quarter, and it loomed large at the end of the game.

"I thought it was a very strange circumstance," Popovich said after the game. "We're fighting to get into the playoffs, so it stings a lot."

Below is a full recap of the game action:

Follow along here for live coverage, highlights and analysis of Spurs vs. 76ershttps://t.co/DKWC5wjU8h

Drew Eubanks came in, got a putback, took a charge from Embiid, and got a few blocks as well. DeMar DeRozan leads the Spurs with 11 points out of the gate, and even drilled a triple.

The Sixers went on an 11-0 run to take a lead behind some hot shooting, but San Antonio got back in it thanks to some solid play from Rudy Gay. He scored 11 points in the period, and hit two three pointers.

11 points, two made threes for Rudy Gay in the first quarterpic.twitter.com/9HmaQDc9ts

Poeltl picked up his third foul seconds into the quarter, and stayed in for a little bit, but Popovich called timeout after he had to choose between taking his fourth and giving Embiid an easy post-up.

Rookie Quinndary Weatherspoon has played some solid minutes. He double teamed and ripped the ball from Embiid, then ran the floor and drilled a pull-up three.

Gay is up to 15 points for the Spurs on 5-7 shooting. Tyler Zeller got into the game and got his first bucket as a Spur.

The Spurs trailed by as many as eight, but erased the lead with a strong run of play from Keldon Johnson, Quinndary Weatherspoon, and DeMar DeRozan. DeRozan finished the half with 17 points, and the Spurs kept it within two points at the break.

Scuse me, pardon me, comin through, hot stuff

DeMar leads all scorers with 17 at the break
pic.twitter.com/tMkCTT3HAG

The Sixers opened the second half with a lot of energy, starting on a 10-4 run.

Lonnie Walker IV got the first start of his career against his hometown team tonight, and he played the first seven minutes but none at all in the second quarter. He started the second half and soared for a massive dunk, but appeared to favor his right knee on the next defensive possession.

The Spurs trailed by as many as 13, but solid play from Walker, Patty Mills and Keldon Johnson helped them cut into the lead. Unfortunately for the Spurs, they gave up too many open threes for the Sixers.

Philly's outside shooting has been better tonight than it was in their previous game, a loss to Indiana. They shot 9-25 in that game, and by the end of the third quarter against the Spurs they had already gotten to 11-28 on the game.

Sixers star Ben Simmons has just 6 points, and went to the bench at the end of the third quarter when he picked up his fifth foul.

Near the end of the period, a desperation three-point shot came up short at the buzzer, but Embiid tipped it in. He touched it before the ball touched the rim, and after the buzzer, but officials counted the basket anyway.

White, Johnson and Murray helped the Spurs get back into it, starting the fourth quarter on a 13-6 run to cut it to five.

Don’t play with the rock near Dejounte🔒 pic.twitter.com/W4evpLsj8a

DeRozan came back in after not scoring in the third quarter. He hit a shot, then dished to Derrick, who drilled the three. White hit another triple on the next play despite a foul, and the four-point play cut the lead to 114-112. with six minutes left.

DERRICK WHITE IS THE TRUTHpic.twitter.com/CHcSlh3c6N

Rudy Gay kept up his hot scoring with a few buckets in between solid defensive plays with Poeltl, White and Johnson on the floor, and he tied the game with under three minutes to go.

DeRozan got Ben Simmons to run him over and foul out on the next possession, and he hit the free throws to give San Antonio a two-point lead. Then he hit a tough layup to push it to four, forcing a Sixers timeout with under two minutes to play.

Embiid hit a tough shot, but DeRozan answered for his 30th point. Tobias Harris got a basket underneath to cut it to two, and then Embiid went to the line with a chance to tie. He hit the first, but missed the second, and Poeltl got the rebound with 20 seconds left.

The Spurs called timeout, nearly turned it over, and got it to Derrick White, who was fouled. He missed the first, but hit the second to give the Spurs a 130-128 lead with 10 seconds remaining.

Shake Milton inbounded the ball and got it back from Al Horford. He took one dribble to the line and fired, and Dejounte's contest was late as the shot went in with 6 seconds remaining. Coach Popovich was displeased with Murray's defense on that play after the game.

"He didn't shake loose, it was a defensive mistake," Popovich said.

On the Spurs' final play, DeRozan penetrated and shoveled the ball to Poeltl underneath, but Embiid disrupted the shot. The ball went out of bounds and was initially called Spurs ball, but was overturned with one second left, effectively ending the game.

The Spurs outscored the Sixers 43-33 in the final period, but came up just short.

DeRozan finished with 30 points, dropping 13 in the final frame. Rudy Gay put up 24, the most he's scored in a competitive game since last year. Derrick White added 20 points, shooting 4-6 from deep, and Dejounte Murray added 13.

Keldon Johnson scored a career-high 15 points, and Popovich praised him after the game.

"Same thing he does every game. He's a monster competitor. Learning more every day. He's getting confidence in his shooting. He drives it well. Hits the boards. Plays hard on D. He's a fine young player."

"Embiid is a handful, he's tough," DeRozan said after the game. "He's one of the best bigs in the league."

The postgame mood was far more somber than the past few games, showing just how bad the Spurs wanted to win this one.

"We're all sick to our stomachs," Murray said after the game.