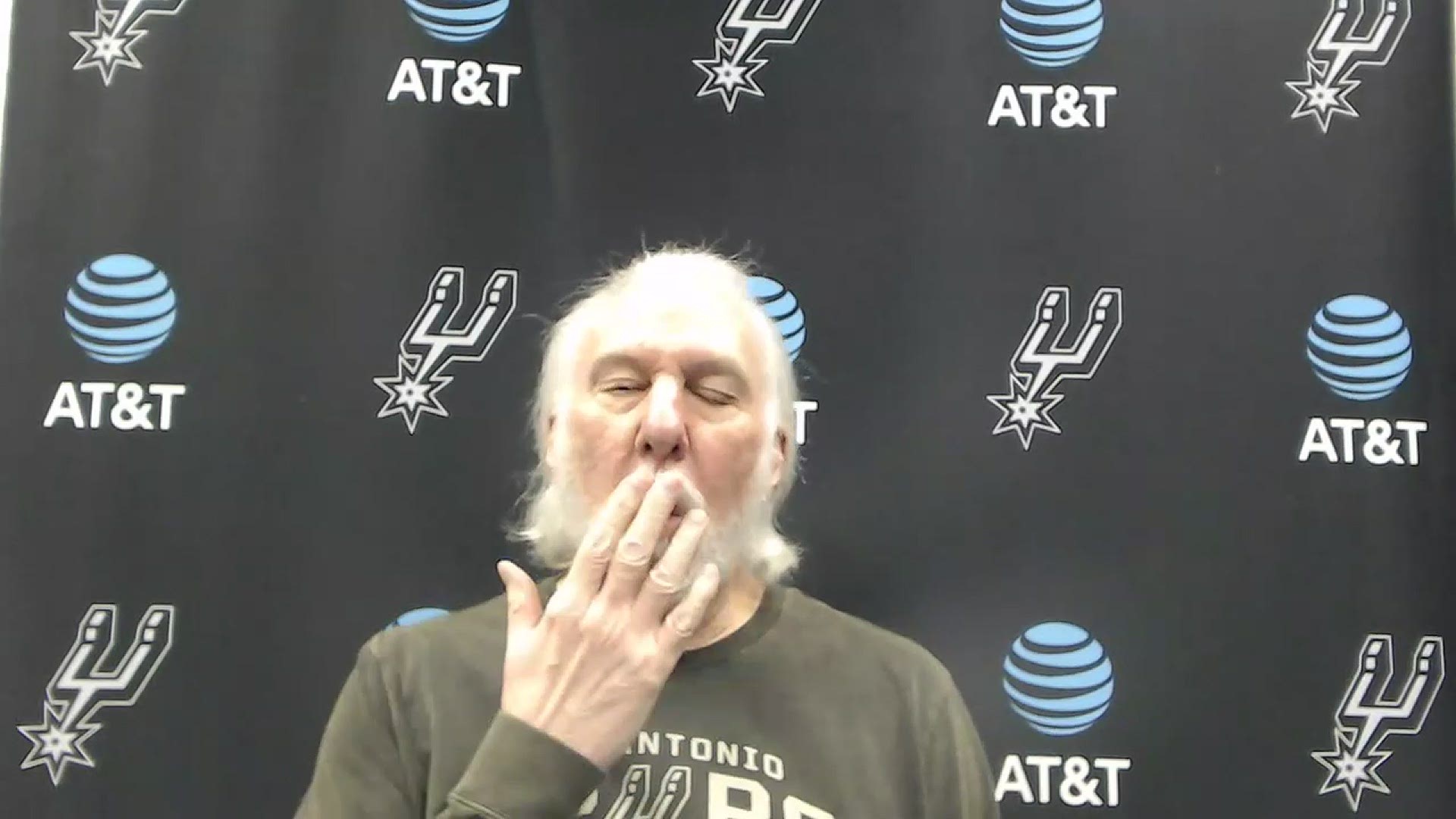 DALLAS — The Spurs had a strong first half but collapsed in the second, falling to the rival Mavericks 115-104 in the first game back from the All Star break and their first game with LaMarcus Aldridge away from the team as they work on a trade.

"We're not a well-oiled machine by any stretch, but I thought they gave it a great effort. We lost the game on the boards tonight, they killed us on the boards," Popovich said after the Mavericks outrebounded San Antonio 51-30 and won second-chance points 21-2. "Played hard, played well, but too many mental mistakes, and a little bit uneven flow and uneven performances offensively." 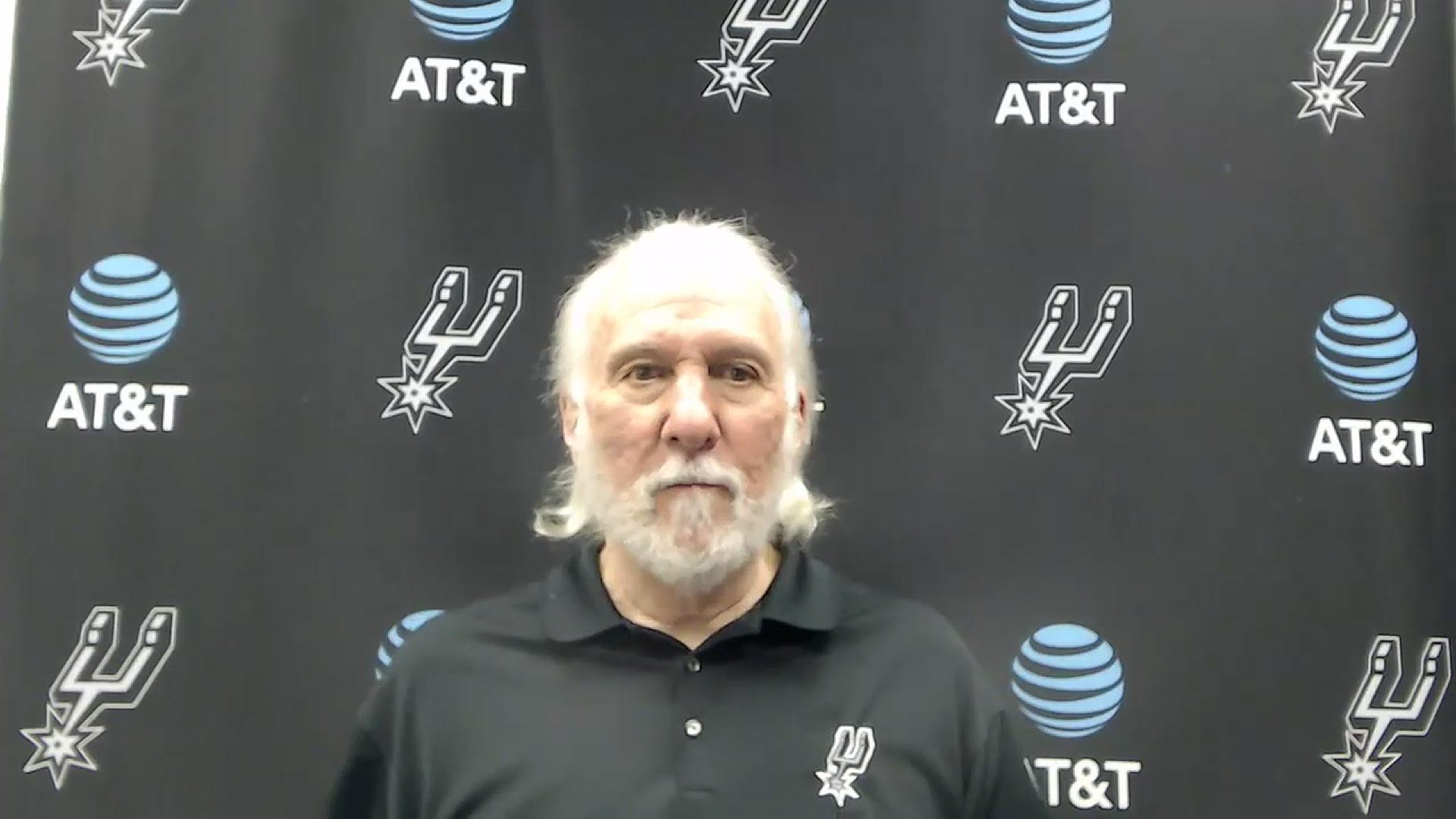 DeMar DeRozan had 30 points and 11 assists, but scoring stalled for the entire team in the fourth as they missed 11 shots in a row during a critical stretch. Combine that with the rebounding on a night when Luka Doncic and Kristaps Porzingis both turned it on late, that's the ballgame.

The starting backcourt shot poorly in Derrick White's third return to the rotation this year, and Luka Samanic and Trey Lyles hardly played. Lonnie Walker IV got into a scoring rhythm in the first three quarters, putting up 12 points by hitting three-pointers and tough layups through contact, but he didn't play at all in the fourth.

Patty Mills and Rudy Gay combined for 27 points off the bench, but each played close to 30 minutes and struggled down the stretch. It was Gay's first game in nearly a month and he hit his first three attempts from deep, but went cold at the wrong time. He spoke about knocking off the rust after the game, and both he and Mills reflected on LaMarcus Aldridge leaving the team. 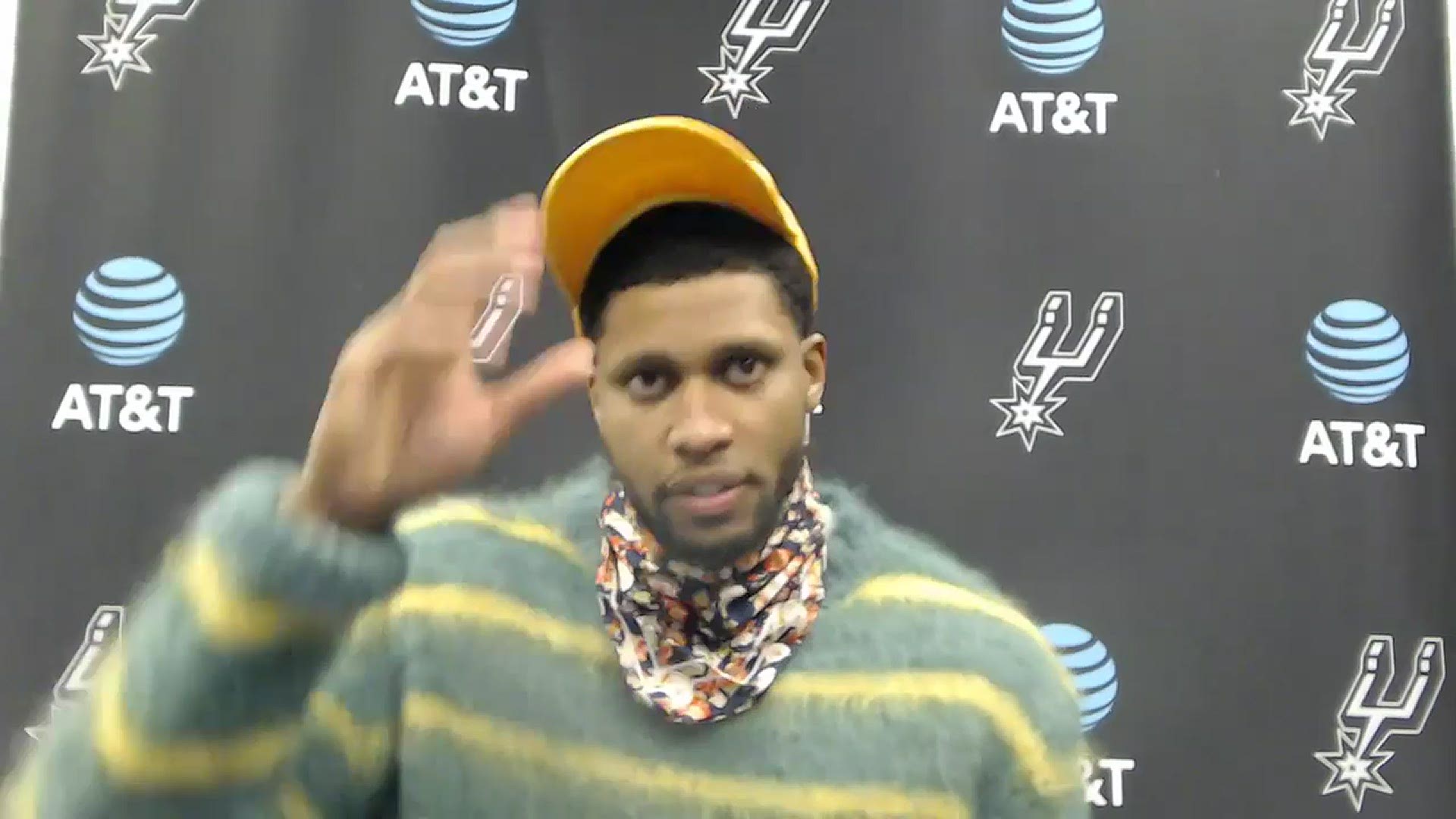 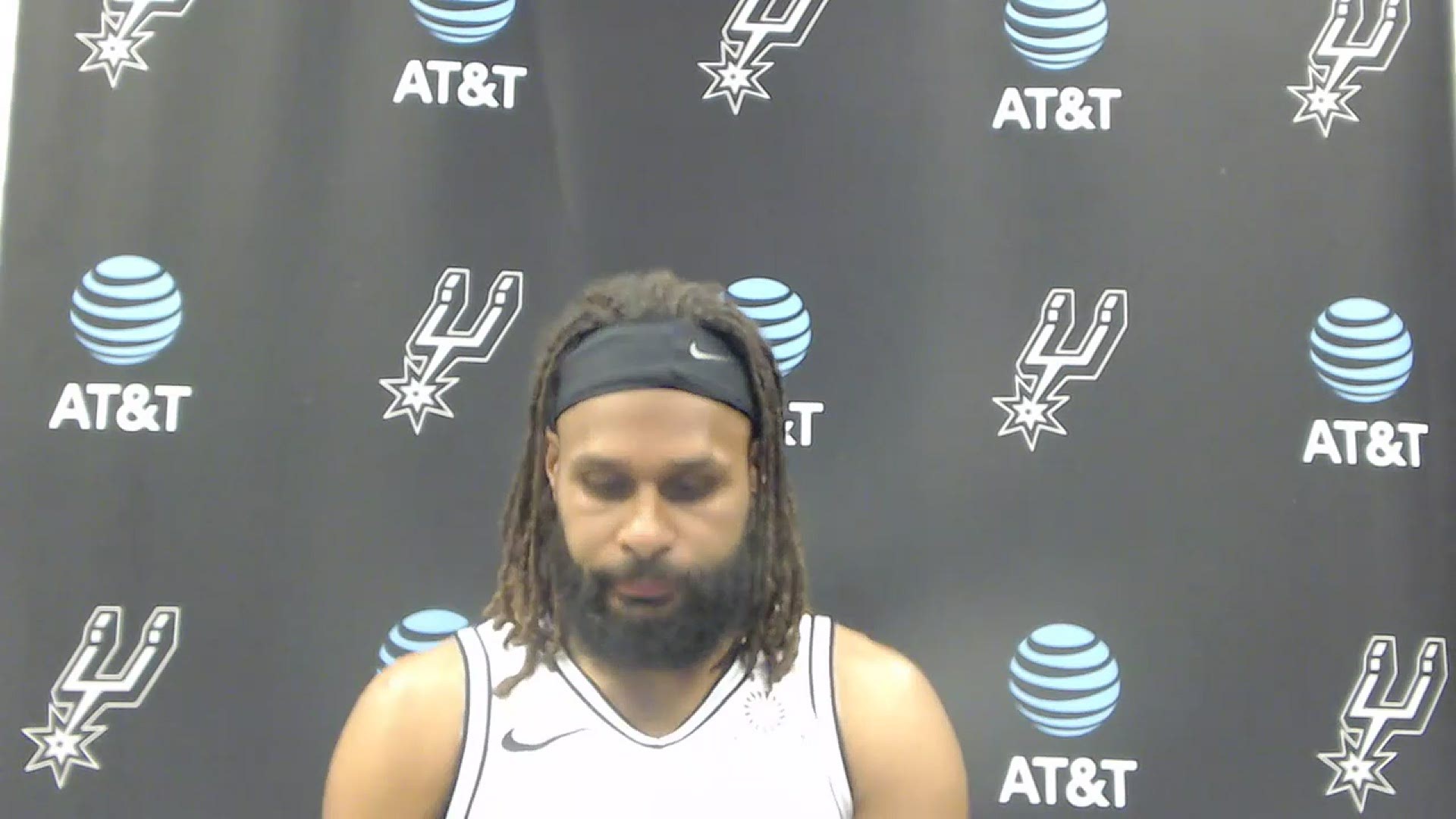 Patty Mills opened the final period coming off a screen, drilling a long deuce to put San Antonio up 88-87. The Mills missed his next few shots from long-range, and the Mavs got their ninth offensive board of the game for more second-chance points.

Mills hit a three, but Doncic drove and found Kleber in the corner for an answer. Mills coughed it up, but the Spurs dodged a bullet from deep as Dejounte came back and drove in for a layup.

Patty, needed that one pic.twitter.com/0NbNZ3qrV0

San Antonio got lucky again as the Mavs missed another open three, and Derrick White drove in transition drawing a flagrant foul. He hit the free throws to tie it at 95, and the Spurs got the ball back.

Dallas capitalized on some sloppy defense, and Doncic found Porzingis for an alley-oop and a three that he hit with a hand in his face to make it 102-95 Dallas with 5:28 to play.

DeRozan got to the line and stopped the bleeding with a few free throws. Murray missed a shot, and the Spurs got two extra cracks at it before eventually missing.

San Antonio missed 10 shots in a row and fell in a 10-point hole with a little over two minutes left. Derrick White got to the line and cut it to 8. The Mavs killed clock, Luka Doncic spun Dejounte around for a stepback three to ice the game.

DeRozan made it 11 misses in a row with a three that was too little too late. The Spurs lost the second half 62-45 and dropped their first game in the post-LaMarcus Aldridge era 115-104.

Dallas opened the second half on a 13-2 run behind Doncic and Porzingis, but the Spurs responded with an 8-3 run to tie it at 68. Keldon Johnson attacked for free throws, and Dejounty Murray drained a three and a transition layup to give DeMar DeRozan his ninth and tenth assists of the game.

Porzingis scored inside and grabbed an offensive board, kicking out for three. Derrick White continued to miss, starting 0-6 from the floor, but made a late-clock double pump layup over Porzingis.

DeRozan faked a dribble handoff, drove baseline, and found Keldon Johnson in the corner for three. Johnson forced a miss with great help defense, then finished in close on a spin into a post scoop to tie it up at 75 and cap a 7-0 run.

A simple, lovely play for DeMar to feed Keldon in the corner pic.twitter.com/KYLMmC9YLN

Dallas responded with a 5-0 run as DeRozan missed his first two free throws of the game. He finished a layup through Porzingis, but missed the subsequent free throw as well. He was close to a steal and transition slam, but couldn't control it after jumping the passing lane.

DeRozan powered in for a jumper drawing another foul, this time hitting at the line. He drove for a tough reverse, then Lonnie Walker IV forced a miss and tried a euro in transition, getting fouled and hitting an absolutely impossible scoop layup. He too missed the free throw.

DeRozan got back to the line and hit both to put San Antonio in front, but a dunk by Tim Hardaway Jr. gave Dallas an 87-86 lead heading to the fourth.

Dallas opened the second period on a 9-2 run as Doncic threw an oop, then finished off a pump fake at the rim, then threw another oop, then passed it out to the perimeter for a three. The Mavs took a 36-34 lead, and the Spurs took a timeout.

Doncic got two more assists, but Derrick White took a charge on him and he got mad, picking up a technical. Keldon Johnson picked up his third foul, and Rudy Gay came back in.

Luka was big mad after Derrick pulled his signature move on him 😂 pic.twitter.com/bYeF0BWkKm

Dejounte Murray and Jakob Poeltl combined to play solid defense, and immediately after that Murray scooted around a screen by Poeltl for a layup. Lonnie Walker IV came back into the game, driving and finding Poeltl for a dunk to take the lead.

DeRozan pulled up off a screen from Poeltl and drilled a foul-line shot. Poeltl then forced a miss on the other end, and Walker pushed the pace in transition, created space with his body and finished the layup.

Lonnie got up and finished the shot on the way down pic.twitter.com/WAhGYiNv00

Rudy Gay drained his second catch and shoot three of the game on assist number 7 by DeRozan, who then got to the rim and finished with his left to give the Spurs their biggest lead of the game at 7. When Dallas answered, he responded in the post giving him a dozen points.

Rudy Gay hit his third triple of the game with a hand in his face, and DeRozan bailed San Antonio out with a long two to beat the shot-clock buzzer. Gay got to the line on a drive, and the Spurs took a 59-52 lead into halftime.

DeMar DeRozan opened the scoring for San Antonio, taking the taller Kristaps Porzingis to the basket for a contested layup. Keldon Johnson missed his first attempt from deep, but DeRozan found him again and he drained it from the corner. DeRozan, fresh off the All Star snub, also pulled up and hit from mid-range in the first few minutes.

Jak with a lead pass to DeMar

Keldon with a 3 from the corner pic.twitter.com/7E9hzQaEMQ

Dejounte Murray took his turn making plays, finding Jakob Poeltl for a shot in close and pulling up from in between. San Antonio took an 11-7 lead early, but Dallas tied it at 11.

Murray secured a steal, but Johnson turned it over with a charge in transition.

Jakob Poeltl went up soft instead of dunking it, missing and going to the line where he's struggled. He hit both though, tying it at 13. DeRozan stole the ball and took it end to end, finishing a difficult layup.

Dallas pushed their lead to three, but DeRozan found Lonnie Walker IV fresh off the bench for a three. After DeMar secured a steal and Dallas' fifth turnover, he calmly passed to Lonnie on the other wing for another three.

Patty Mills came off the bench and hit a three and a mid-range shot, but Dallas answered each as Doncic broke down the defense. DeRozan found Rudy Gay for a triple, and Patty drained another three for San Antonio's sixth three of the quarter in just 9 tries. San Antonio led 32-27 after the first, as DeMar led the way with 6 points, 6 assists and 3 steals. Patty and Lonnie combined for 14 off the bench.

Spurs' injury/inactive report: Devin Vassell: OUT (healthy and safety protocols); LaMarcus Aldridge: OUT (not with team).

Before San Antonio's first game of the second half of the season, Gregg Popovich made a surprising announcement that LaMarcus Aldridge and the team had agreed to part ways, and they're reportedly exploring trade opportunities for the 7-time All Star.

"He won't be with the team moving forward," Popovich said. "He's been a great teammate, there's no problem there, we just think this is a win-win for both LaMarcus and for the club. When an opportunity arises, that will be up to management, his agent, that sort of thing, and we'll all move forward."

Jakob Poeltl had already taken over as the starting center after Aldridge struggled to defend and stay healthy. He had a tough time adjusting to his new role off the bench, and after strong performances from Poeltl and backup big men like Trey Lyles and Luka Samanic, Pop and the Spurs are ready to move on.

This is about as close as the Spurs have been to healthy all year, only missing Devin Vassell. Derrick White is returning to the rotation from injury or illness for the third time this year, but he'll start right away alongside Dejounte Murray, DeMar DeRozan, Keldon Johnson, and Jakob Poeltl.