DeMar DeRozan led the way with 27 points and 8 assists, and he knocked down some clutch threes in the fourth quarter, while Patty Mills scored 21 off the bench. 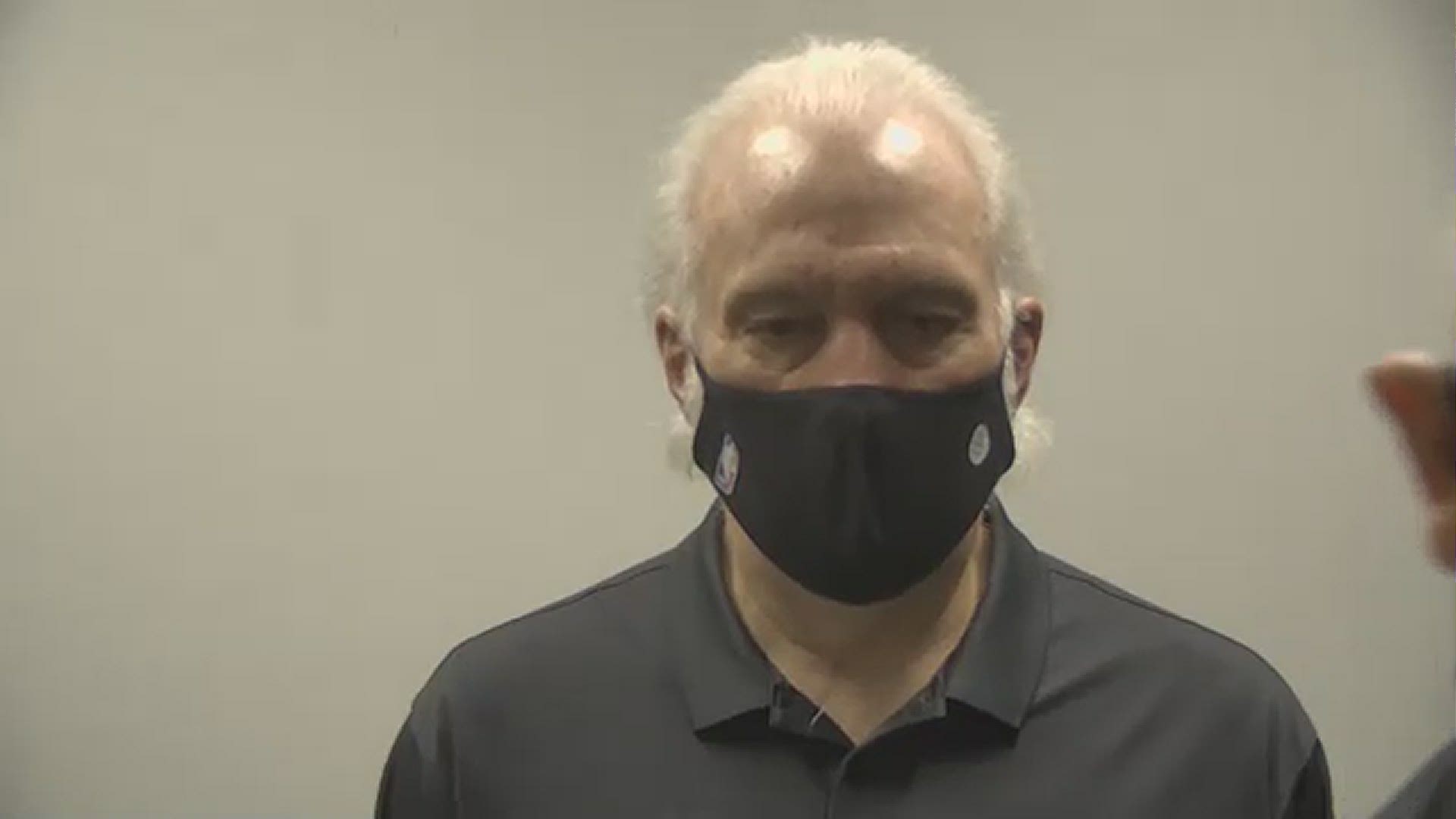 SAN ANTONIO — The Spurs are off to a 2-0 start to the season after beating the Toronto Raptors 119-114 in their home opener.

DeMar DeRozan led the way with 27 points and 8 assists, and he knocked down some clutch threes in the fourth quarter, while Patty Mills scored 21 off the bench on a nearly perfect shooting night. Dejounte Murray notched his first career triple double, and LaMarcus Aldridge may have made the biggest play of the night.

Every player in the ten-man rotation had at least a moment or two, and the team notched 36 assists as a group.

There are no fans in the stands, but veteran guard Patty Mills said it was good to be back in the arena for their first game since March. 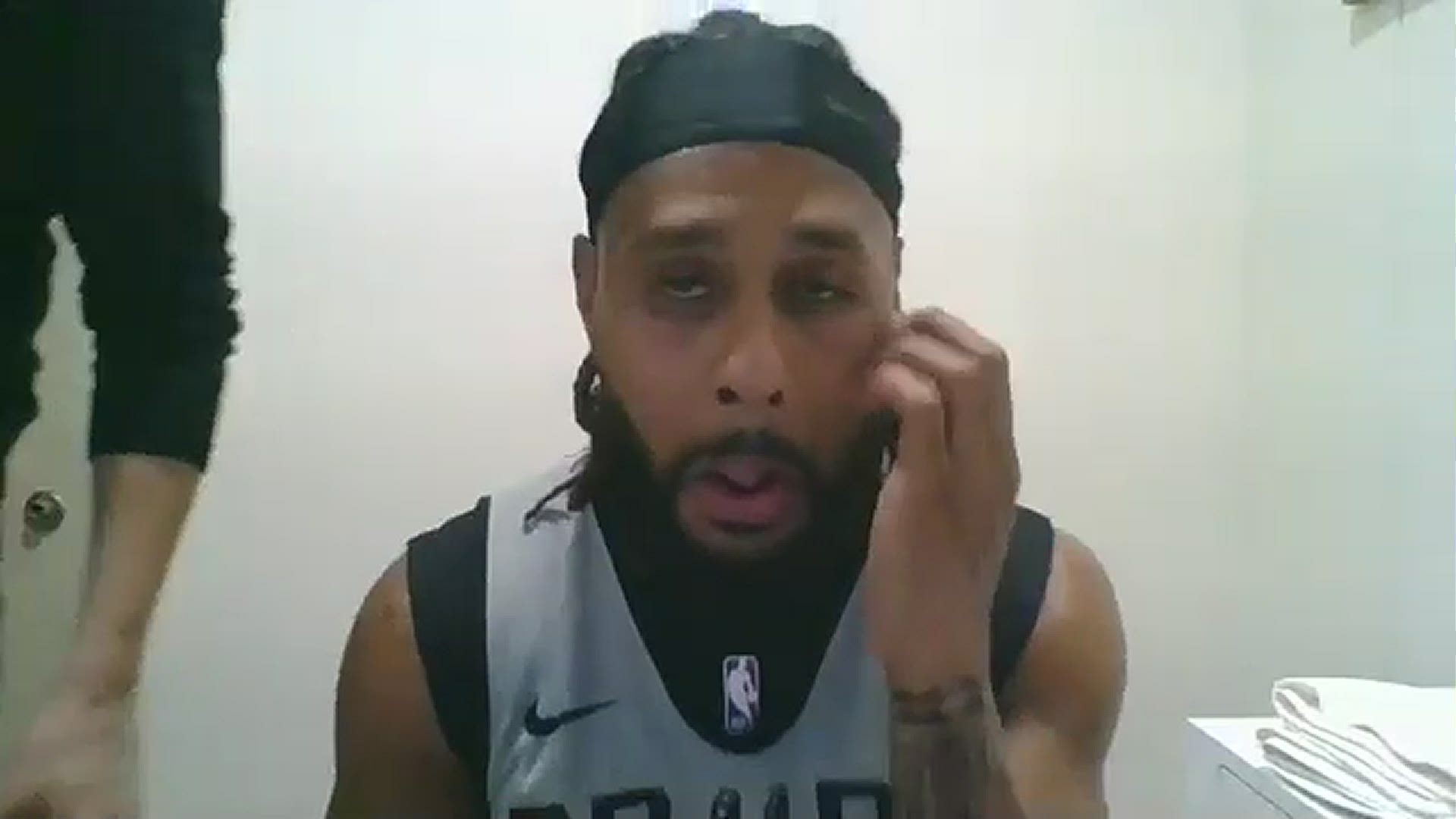 Coach Popovich said it's been rewarding to watch the development of young players in the system like Dejounte Murray, Derrick White and others. Speaking of White, Pop doesn't have an exact timetable for his return, but says it will be "soon."

Another one of those young players is Lonnie Walker IV, who broke down how the Spurs attack in transition and in half-court sets. He said the "point five" style, which makes for constant motion as players decide if they'll shoot, pass or drive .5 seconds after they catch it. 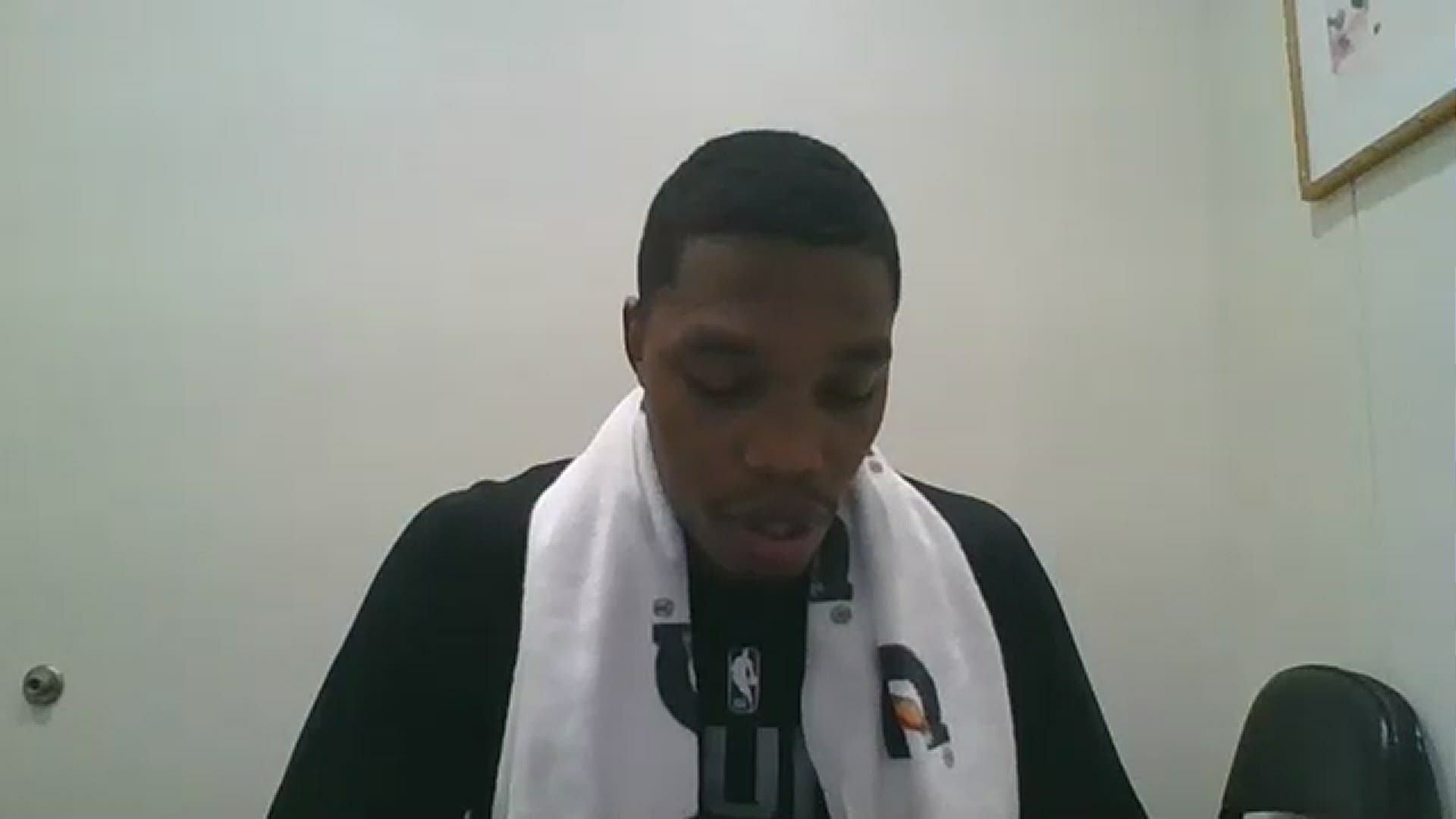 DeMar DeRozan, Rudy Gay and Jakob Poeltl are all playing against their old team, and former Spur Aron Baynes will likely start for the Raptors.

Before the game, Pop and Patty both spoke glowingly about the big guy.

"He's a wonderful human being, a tough nut on the court, he gets after it, and takes no prisoners, he's there to win. Off the court, he's a sweetie pie.

"I love his grit, his determination, his determination to get better," Mills said. "He's one hell of a dude once he steps in between those lines, that ferocity that he plays with, and he still finds ways to get better and to continue to develop, which is key. He's grown into a legit 5-man who can shoot the ball, obviously the way that the NBA is going, he finds himself in positions to make big impacts on teams that do really well."

"Then you get him off the court and he's definitely a family-first guy with his three kids he has now, and his wife," Mills added. "Someone that I've essentially grown up with playing basketball, and someone that being so close with, you love to see the progression and the success that he has both on and off the court. Gonna have to match his ferocity when you step on the court though, because even though we grew up together, he doesn't care about that once we're competing."

Toronto got out to an early lead behind strong scoring by Aron Baynes and rough defense by LaMarcus Aldridge and some others. Baynes scored 9 points in the first quarter, with Pascal Siakam notching 8 points, 5 boards, 4 assists and a steal. Even Chris Boucher scored 9 off the bench.

DeMar DeRozan drilled a three, Lonnie Walker IV knocked down a couple of them, and rookie Devin Vassell hit from downtown as well. DeRozan hit six of his first seven shots for 16 points, and added two assists. One of those makes was from the top of the arc, with his foot on the line.

DeMar for 3? DeMar for 3pic.twitter.com/OMYeQ9AKNL

Grit play that turns into a Lonnie 3, sign me up
pic.twitter.com/3MKJ4zpcVJ

The Spurs just couldn't stop the Raptors from scoring. Toronto finished the period with 39 points while shooting 60% from the floor and 50% from three. Outside of DeRozan and Walker, Spurs starters shot just 1-8. Still, San Antonio managed to score enough to stay in striking distance at 39-33.

Vassell got to the rim for a dunk to start the period, and Patty Mills drilled two triples to help San Antonio claw within three points. Toronto's Matt Thomas matched with two of his own.

Rudy Gay got in on the scoring, and a DeRozan steal led to a ferocious two-handed jam for Keldon Johnson in transition, to cut the deficit to one.

The next big bucket went rookie to vet, with Vassell blocking a shot and finding Aldridge for a jumper to tie. Aldridge got a layup after some nice two-man game with Lonnie. Vassell ripped a steal and jammed it home, LA found Lonnie for a few buckets, and The Spurs built their first lead of the game to 58-52.

Loved the two-man game here with LA and Lonnie
pic.twitter.com/DvZgNI0NlZ

San Antonio carried a 61-58 lead into the break. On top of 16 points and 4 assists for DeRozan and 12 points, 3 boards and 2 assists for Walker, Mills kicked in 11 points without missing a shot, including 3-3 from deep.

The Spurs shot 48% from the floor and 44% from deep in the half, while tightening the screws on defense in the second quarter to hold Toronto to just 19.

The back-and-forth affair continued to start the second half, and Aldridge knocked down a three as Dejounte Murray passed out of a mess.

Murray attacked the basket through Siakam and Baynes with some success in the third. Toronto went on a 10-0 run in the quarter, but Patty scored a few times to stem the tide and get San Antonio back in the lead. He finished the quarter with a team-high 21 on 8-8 shooting.

The Raptors decided to force the ball out of DeMar DeRozan's hands by double teaming him in the pick and roll, but DeRozan just kept passing to Jakob Poeltl, who kept making good decisions on the short roll.

San Antonio went into the fourth protecting a 91-86 lead.

Trey Lyles checked into the game after not playing in the opener. He immediately hit a three and played some pretty good defense. Still, the Raptors tied it at 101 as Chris Boucher found a couple of threes and a couple of layups for 10 points in 5 minutes.

Keldon Johnson sparkled on a play where he caught at the arc, shook one defender with a quick jab and then finished between three more.

Keldon beat one dude and finished between three more? https://t.co/qKEPxsXnu4

The game stayed close as teams traded buckets. The Raptors knocked down five of their first six threes in the fourth. DeRozan answered with a three of his own, then a couple of mid-range jumpers.

Toronto's interior defense was quite good, as they registered 9 blocks as a team with 7 from Boucher alone.

Down 4 and left wide open, DeRozan knocked down his third three of the contest. After the game Coach Pop said it's part of his game this year, and he'll be shooting them more. 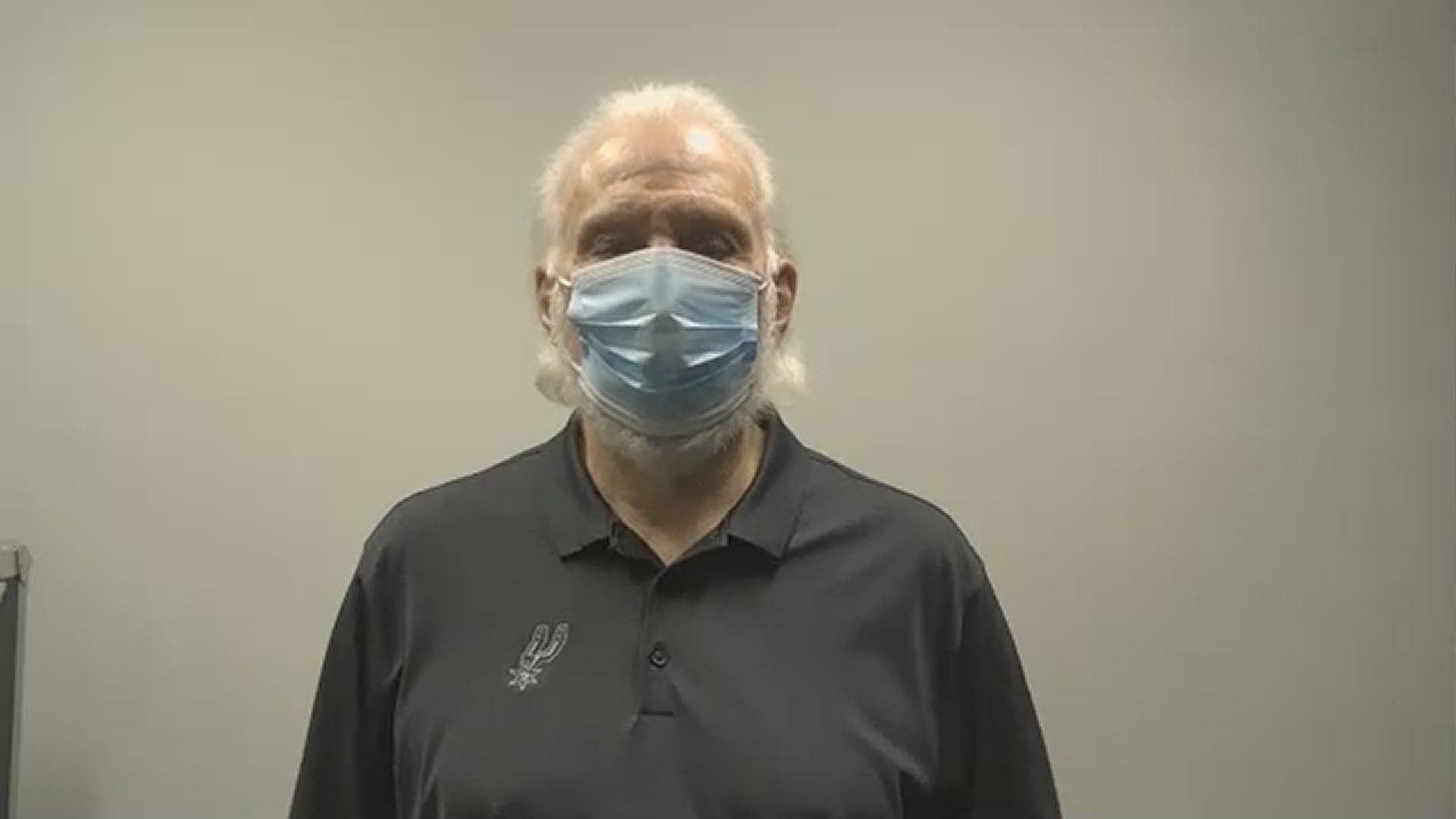 DeRozan said that he's always been able to shoot it, but this year he's more comfortable with taking what the defense gives him, even if it's deep. 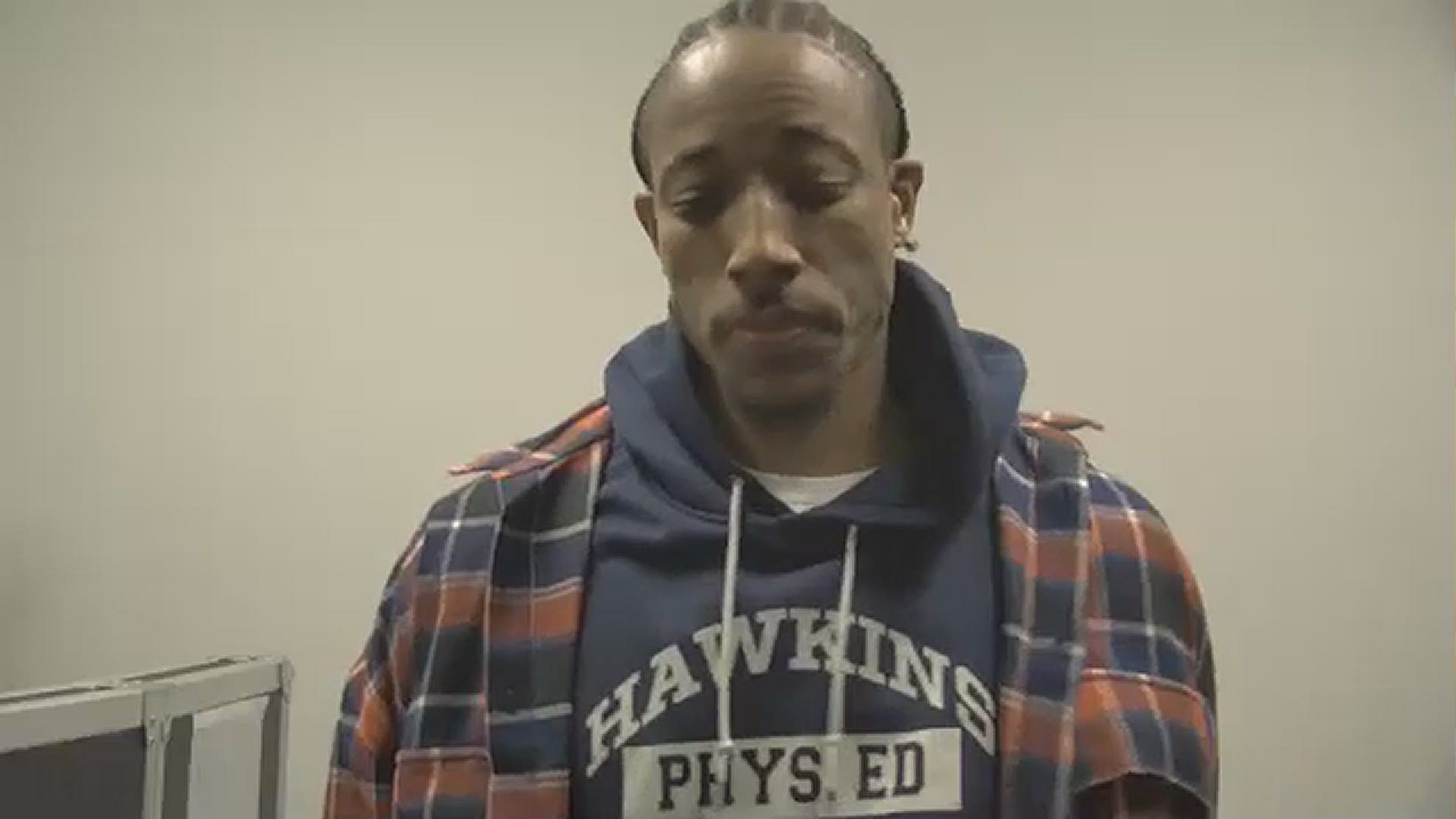 After a stop, DeRozan grabbed an offensive board and whipped it to Patty with a chance to take the lead, but he missed for the first time all game. Mills said he was honestly annoyed that the shot didn't fall, but his teammate made a play to pick him up. 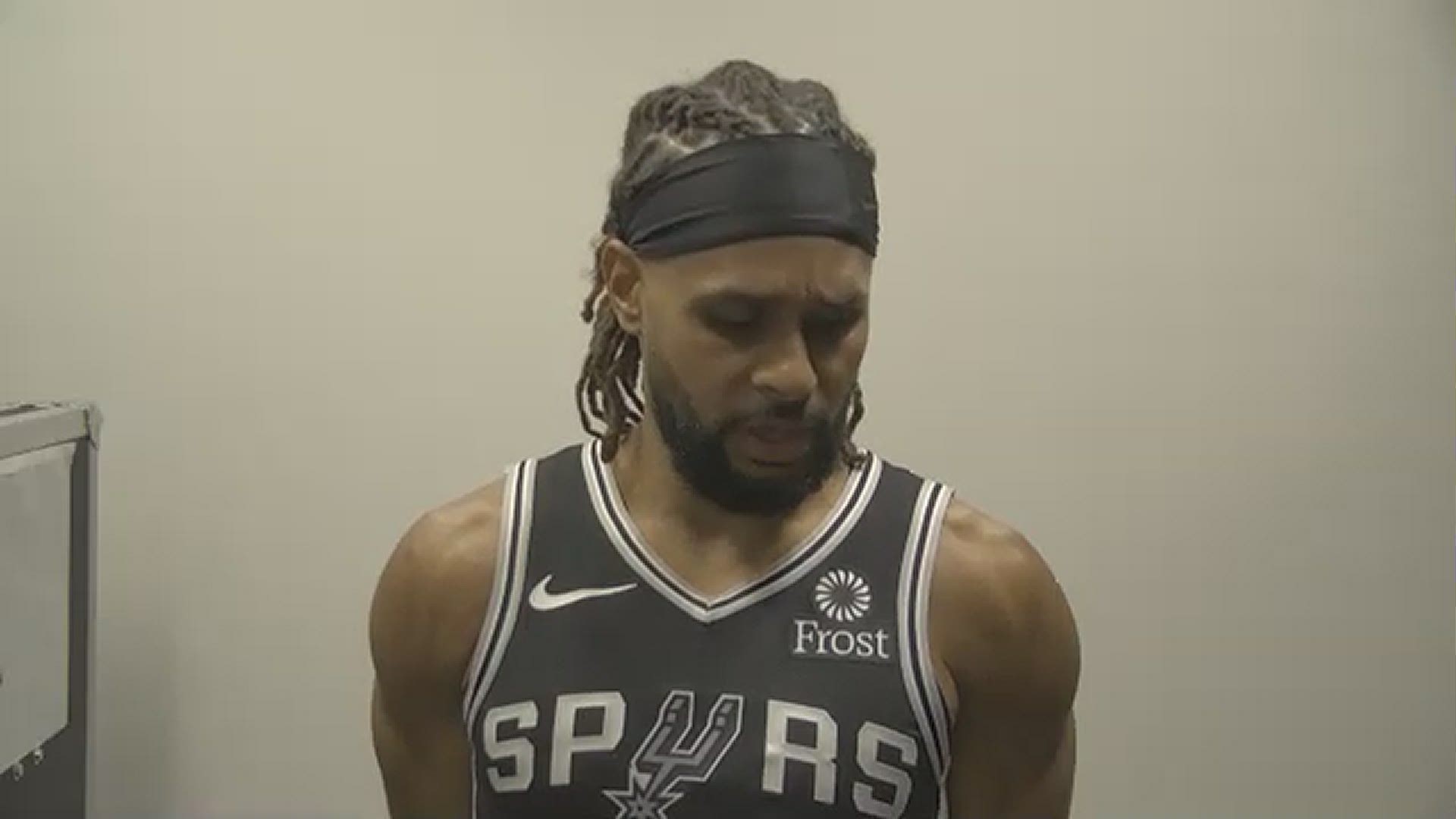 Aldridge scooped up the rebound, and on a rough shooting night he banked it in to give the Spurs a 115-114 lead.

LaMarcus picked a great time to want it more https://t.co/Bc0qh9zWMb

Kyle Lowry got a good look to take the lead back, but came up short on the open mid-range shot. Rudy Gay got the ball and hit two clutch free throws to push the San Antonio lead to 3. The Spurs held on and won 119-114.

Dejounte Murray finished with his first triple double to go with some solid defense against a wide range of Raptors wings.

"I still feel like I could've played a whole lot better on both ends of the floor, but at the end of the day we won, and I'm thankful," Murray said. 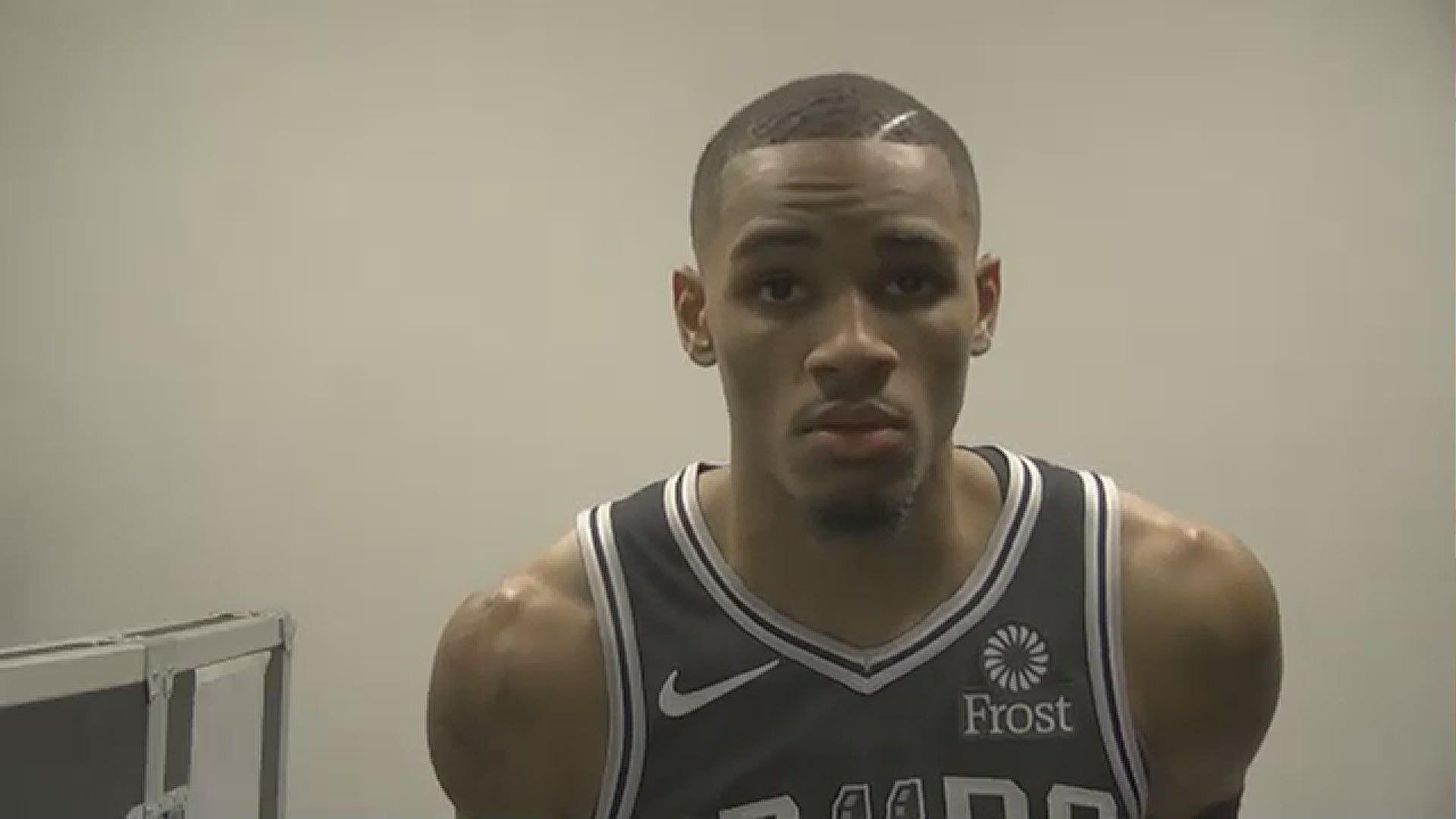 San Antonio has a lot to be happy about on offense after hitting 14-34 from deep and assisting on 36 of 47 made baskets as a team.

The Spurs are playing fast, shooting well, and figuring things out defensively. Their first win was taking care of business against a team they need to beat in Memphis, but this game showed that this new-look San Antonio team is good enough to hang with a solid opponent like Toronto.

Their next test will come after a quick flight to New Orleans for a Sunday-night showdown against the Pelicans, who will likely be scrapping for a playoff spot in the Western Conference. It remains to be seen if Pop will rest anybody on the back-to-back.