Aldridge missed San Antonio's first two tight losses against the Lakers, but was on fire and led five Spurs in double-figure scoring. 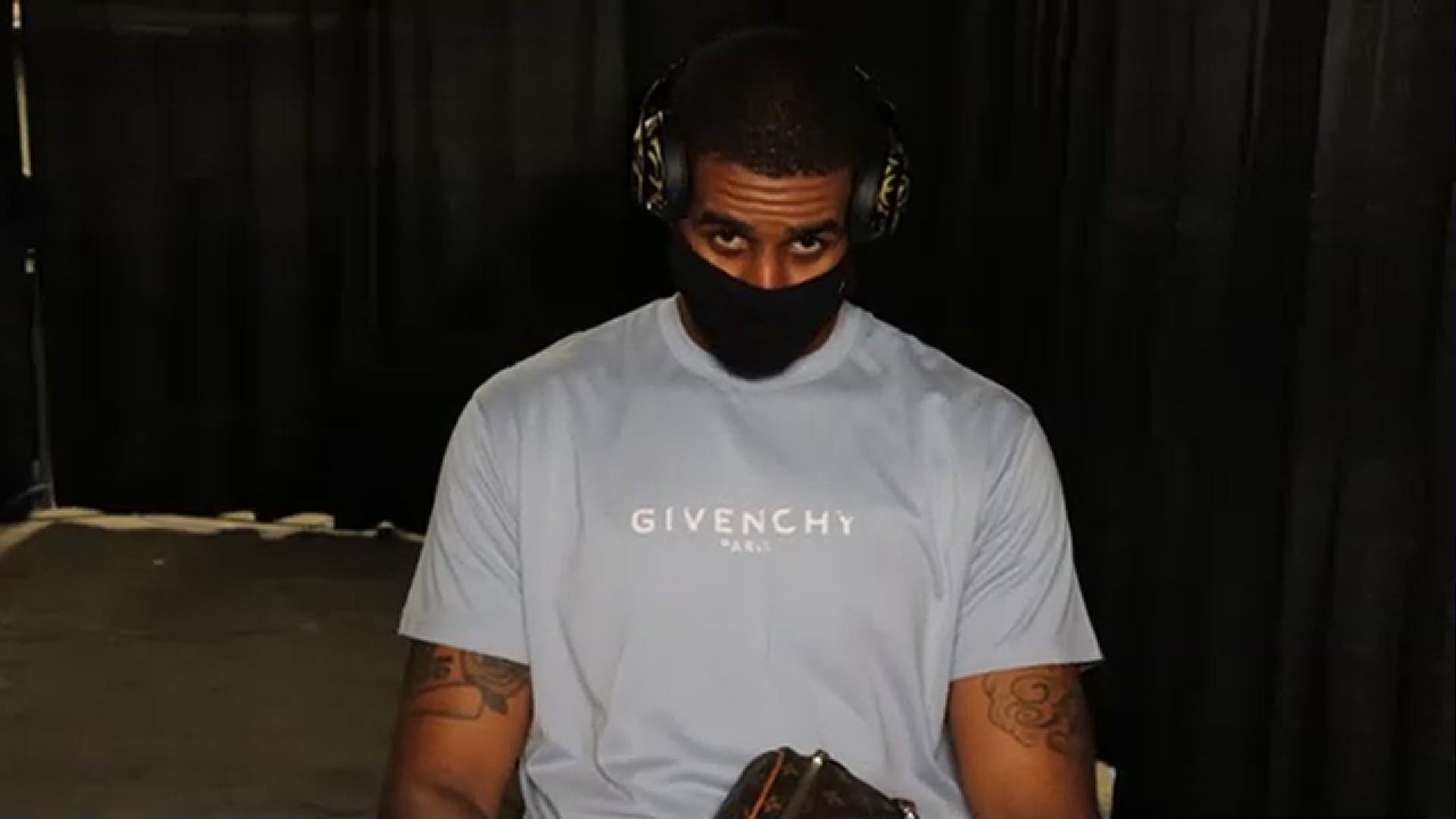 LOS ANGELES — The Spurs had lost to the Lakers twice, but on Thursday night they came in with LaMarcus Aldridge and came out on top for that reason.

The veteran big man supplied 28 points in the first three quarters as the Spurs downed the defending champs 118-109 in a wire-to-wire win. It wasn't just one player or one part of the game that allowed San Antonio to win their second game in a row at Staples, beating the Clippers on Tuesday.

"We ran all the same stuff, we didn't do anything different," coach Gregg Popovich said. "Every game is who makes shots, who doesn't turn it over, who plays good D, who rebounds, all those things add up, it's not one thing." 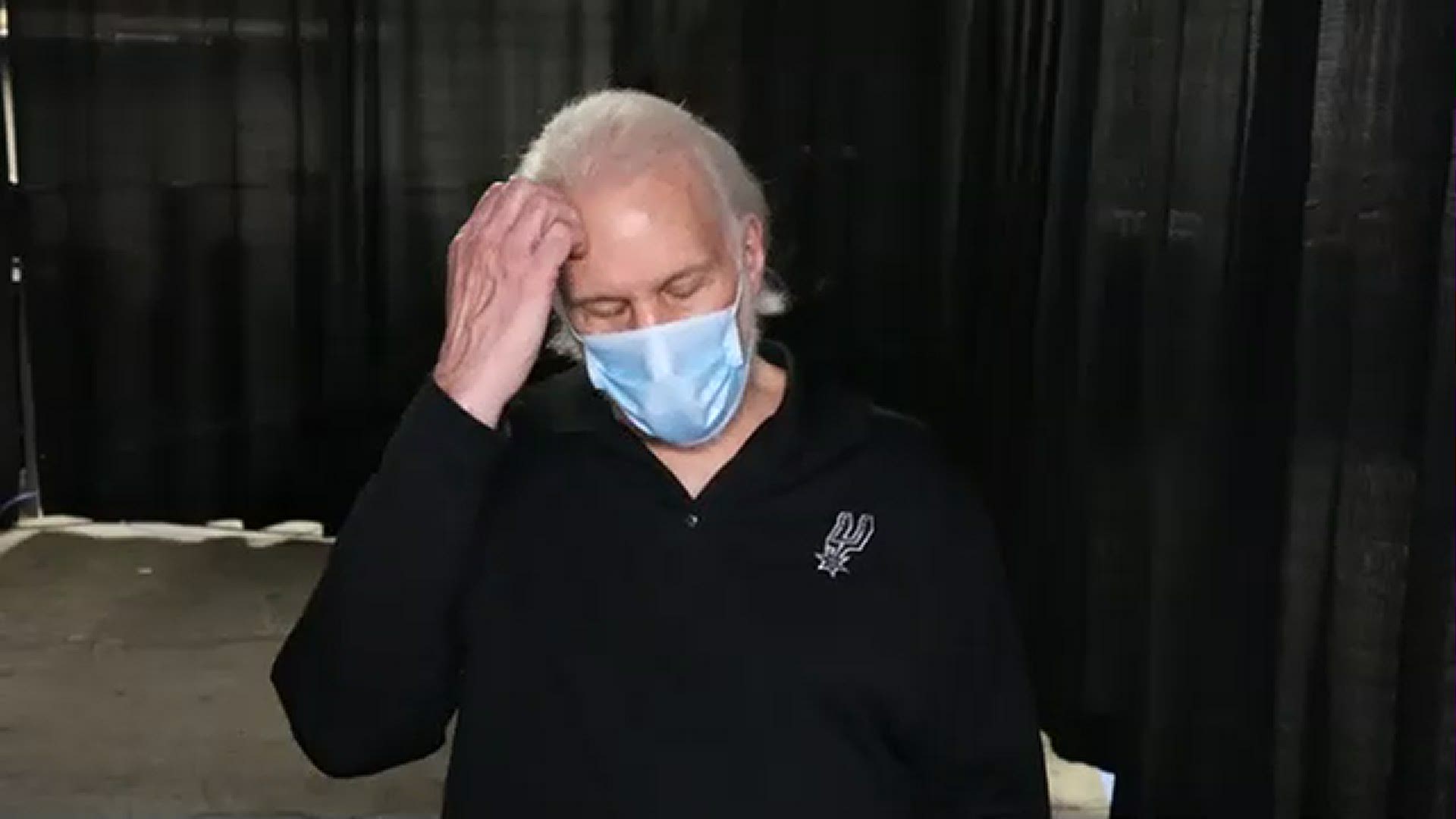 RELATED: Popovich blasts Trump and his allies after violent attack at U.S. Capitol

The Spurs performed admirably in all of those areas. They shot 47% from the floor, 46% from deep and 94% from the free-throw line, amassing 28 assists on 43 made baskets to just 6 total turnovers. They hung with the tremendous Lakers on the glass, defended well on a lot of plays, and dodged bullets on others.

Aldridge finished with 28 points on 11-18 shooting, 3-7 from deep. He only had 5 boards, but added 3 assists and helped hold Anthony Davis in check.

"LA gave us great space, he scored for us, he worked hard on D, he's guarding Anthony Davis out there, that's a pretty tough job," Popovich said. " He played a really good all-around game."

Most of Aldridge's shots were found in the flow of the offense, spacing the floor or cutting to the basket without the ball. He's almost completely abandoned the post game that most fans know him for -- almost.

On one play in the third quarter, LaMarcus tried what seemed like his only post up of the night. He did it out of necessity, almost by accident, and from beyond the three-point line. And of course, on a night where he had it all going, the shot fell.

Good news: He hit a 3 😅pic.twitter.com/NTQCpO2x0u

"Well, since I don't get to post up on the block no more I gotta post up somewhere," Aldridge said with a laugh. "If it's at the three-point line I'll take it."

He said seriously that he wanted to isolate and get to his mid-range game, but he fumbled the ball a bit with the shot clock ticking down.

"I feel better off the dribble lately, so I just got into my dribble and shot it, and, you know, it felt good, and it definitely wasn't a shot I want to do all the time, but when it's working, it's working."

"He had a couple of tough ones," Dejounte Murray said smiling from ear to ear, praising his hard work on and off the court returning from injury. "It's great to have him back with us." 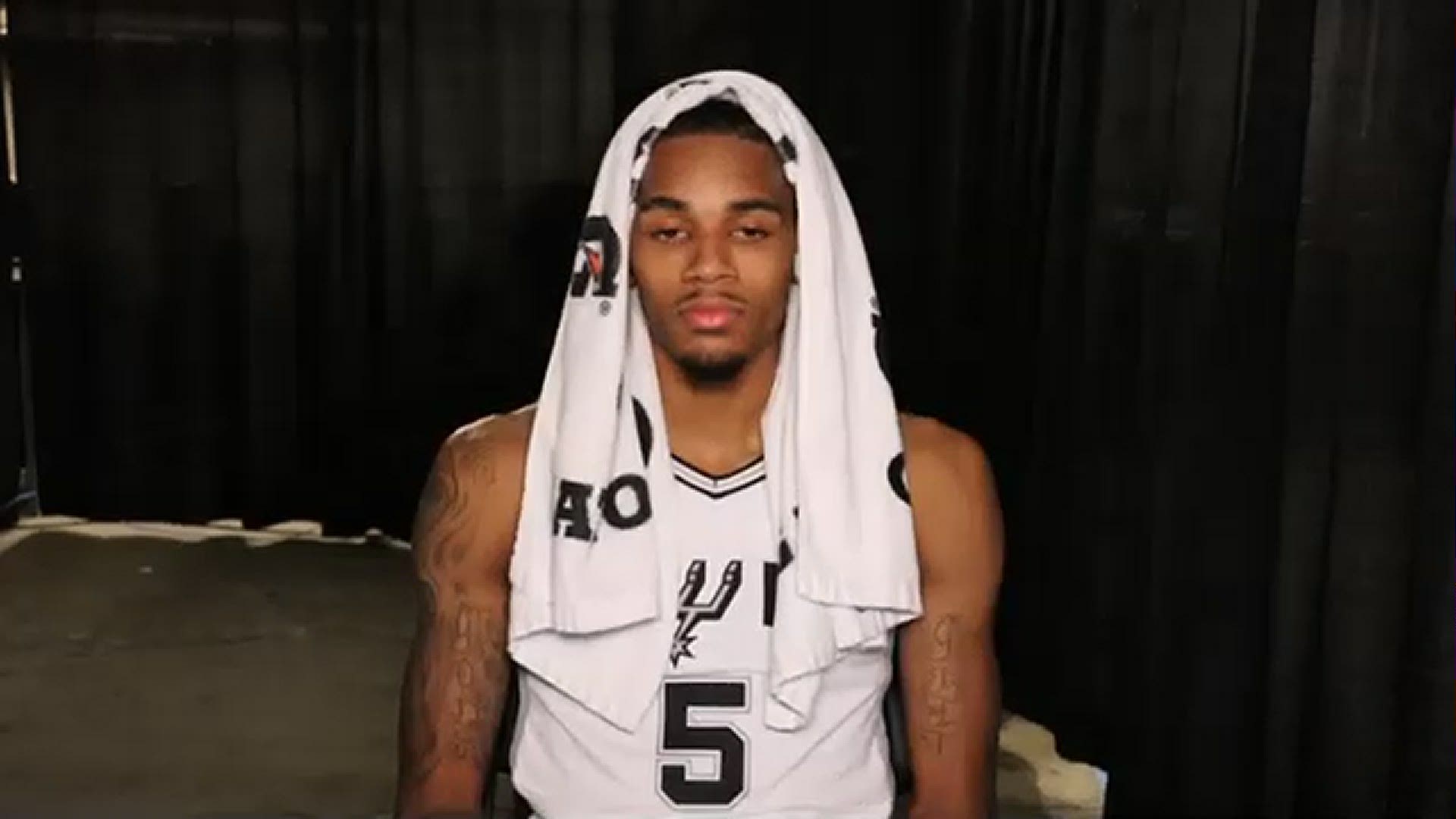 "We knew it was a matter of time, just him getting his wind under him, his rhythm, just the feel for the game back," DeRozan said. "When you go so long without playing it takes a toll on you, it can take a while, especially with us not having a long preseason like we usually do, so to see him catching his rhythm is definitely good." 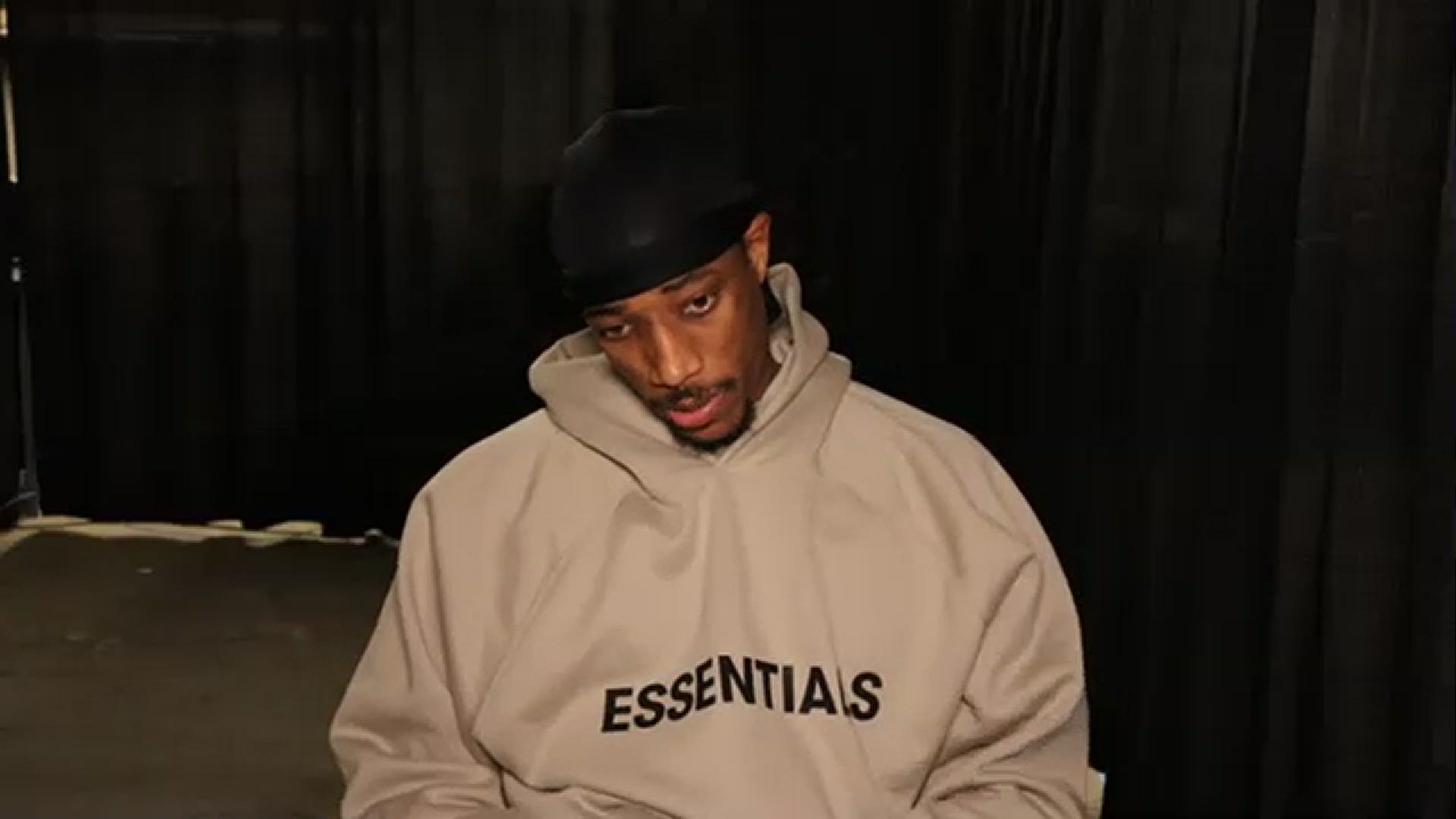 Aldridge wasn't the only one finding success from deep. San Antonio shot 16-35 from downtown, and six players hit two or more shots from behind the arc.

"That's what we preach, sharing the ball, trying to have the ball find the open guy, and guys are ready to shoot in rhythm," DeRozan said. "We work on it so much in practice and training camp, and we try to make it contagious. When we catch a rhythm, guys sharing the ball, we have nights like tonight."

This was the best game of San Antonio's season and clear evidence that when they're on, they are a fast, dynamic, defensive, athletic, sharpshooting, ball-moving, high-quality basketball team. If they lock in and compete they can beat anyone, and thankfully they don't have to play the Lakers anymore.

San Antonio played the Lakers thrice and the Clippers once, winning two games on the road. Now at 4-4 overall after a tough opening stretch that also included the Jazz, Pelicans, Grizzlies, and Raptors, the Spurs have the easiest remaining schedule, according to Tankathon.

The two teams started the game an ice-cold 0-8 from the floor, scoreless through the first two minutes. Keldon Johnson blew past Anthony Davis, but missed an open dunk. He kept attacking the rim, but couldn't get anything to drop.

DeMar DeRozan pulled up for a mid-range that fell, then hit Dejounte Murray in the corner for three, prompting a Lakers timeout down 5-0.

Johnson atoned for his misses with a steal, and Lonnie Walker IV got blocked but recovered it to make a jumper. Aldridge hit an elbow jumper, and after an Anthony Davis layup drilled a triple to put the Spurs up 12-2.

DeRozan drove to the hoop and kissed it off the glass, then got a steal and got to the free-throw line in transition. The Lakers finally got a few buckets, but Aldridge hit another three to give the Spurs another 10-point lead.

He caught at the arc, but couldn't quite handle the pass. He recovered the ball though, and with the defense closing out to him he swung it to DeRozan who drilled an open triple.

On the next possession, Patty Mills found DeMar for another triple, getting fouled and hitting the free throw to boot.

After a slow start, LeBron hit a few threes of his own and the Spurs led 34-26 after the first.

Aldridge and DeRozan each finished the period with 12 points and 5 of the Spurs' 9 assists.

LeBron made good use of his off arms to hook Dejounte multiple times and create scores for Los Angeles, and the officials let him have his way. As Mel Brooks would say, it's good to be King.

Rookie Devin Vassell hit two triples of his own to start the period, one over LeBron.

San Antonio continued to score efficiently, with Dejounte and Lonnie getting in on the action.

Rudy Gay hit an impossible-seeming desperation jumper over Anthony Davis in the post, then knocked down the open three that he's struggled with this season off a sliding pass from Patty.

Talen Horton-Tucker, a promising young player for LA, scored 7 in a row for them. Lonnie drilled another three, joining DeRozan and Aldridge in double figures for scoring. He also hit a Magic Johnson-esque pass on one of the Spurs' prettiest offensive possessions of the year.

Spurs up 65-56 at half over the Lakers, haven't trailed

Keldon started his second half by drilling a triple and then making a nice assist to Aldridge in the pick and roll.

Gorgeous feed from Keldon over the top

Aldridge's tear continued in the period, but the Lakers kept it close with LeBron assisting on 19 of the first 23 in the period for Los Angeles.

Aldridge showed just how hot he was when he struggled to corral a pass at the arc, turned his back on the smaller Alex Caruso as he recovered and hit a ridiculous three off the bounce at the buzzer.

Good news: He hit a 3 😅pic.twitter.com/NTQCpO2x0u

Devin Vassell, as always, was a joy to watch on defense.

The Lakers fought all the way back on an 11-1 run and tied the game at 89 as Gay took a hand to the face from his teammate Jakob Poeltl. DeMar hit a floater to give San Antonio a 91-89 lead with 12 minutes left.

With a close game coming down to winning time, San Antonio got huge plays from their bench. Patty dropped dime number 7 to Jakob Poeltl for a dunk in transition.

For the second time in the game, Rudy Gay made a tough shot inside before stepping out to knock down a three. After Patty suckered Caruso for three free throws, Gay hit another three to push San Antonio's lead back to 10.

A swarming team block on a LeBron layup attempt made it clear that the Spurs didn't want to let him beat them. Murray sized up another corner three and drilled it with a hand in his face.

Dejounte up to 16 points nowpic.twitter.com/E1chlYE0PC

The Spurs never really looked back, and both teams got the end of the bench players in at the end. San Antonio won 118-109.

The San Antonio Spurs will play the defending champion Lakers for the third time in nine days, looking to build on two competitive losses.

The Spurs should have a key piece that they were missing in those first two contests: LaMarcus Aldridge. The veteran big man should help San Antonio match up with a tremendous Los Angeles team.

The bright side of this brutal stretch with the Lakers to start the season is that San Antonio won't have to face them again this year. In fact, even before getting this final game against the Los Angeles out of the way, the Spurs have the easiest remaining schedule in the league, according to Tankathon.

Tonight's game will come down to whether or not San Antonio can limit the spectacular duo of LeBron James and Anthony Davis for a full 48 minutes. Keldon Johnson mainly guarded LeBron in the first two games, with Jakob Poeltl in the starting lineup for Aldridge. That left DeMar DeRozan checking the much larger Marc Gasol, but he did an admirable job.

Will Coach Popovich go with a bigger lineup using Aldridge and Poeltl at the same time? If so, the Gasol matchup isn't a bad one for Aldridge and allows DeRozan to play shooting guard, though Lonnie Walker IV would likely have to move to the bench.

San Antonio decided to simply replace Poeltl with Aldridge in that starting lineup, and Aldridge will likely struggle to stay in front of the gigantic guard that is Anthony Davis on the perimeter. It also still forces DeRozan to expend energy on defense doing all he can to prevent Gasol from getting the ball down low.

Spurs going with a smaller lineup.

RELATED: Popovich blasts Trump and his allies after violent attack at U.S. Capitol

Before the game, news broke that reserve center Drew Eubanks and two other members of the team's travel party will not be with the team tonight due to the league's health and safety protocols.