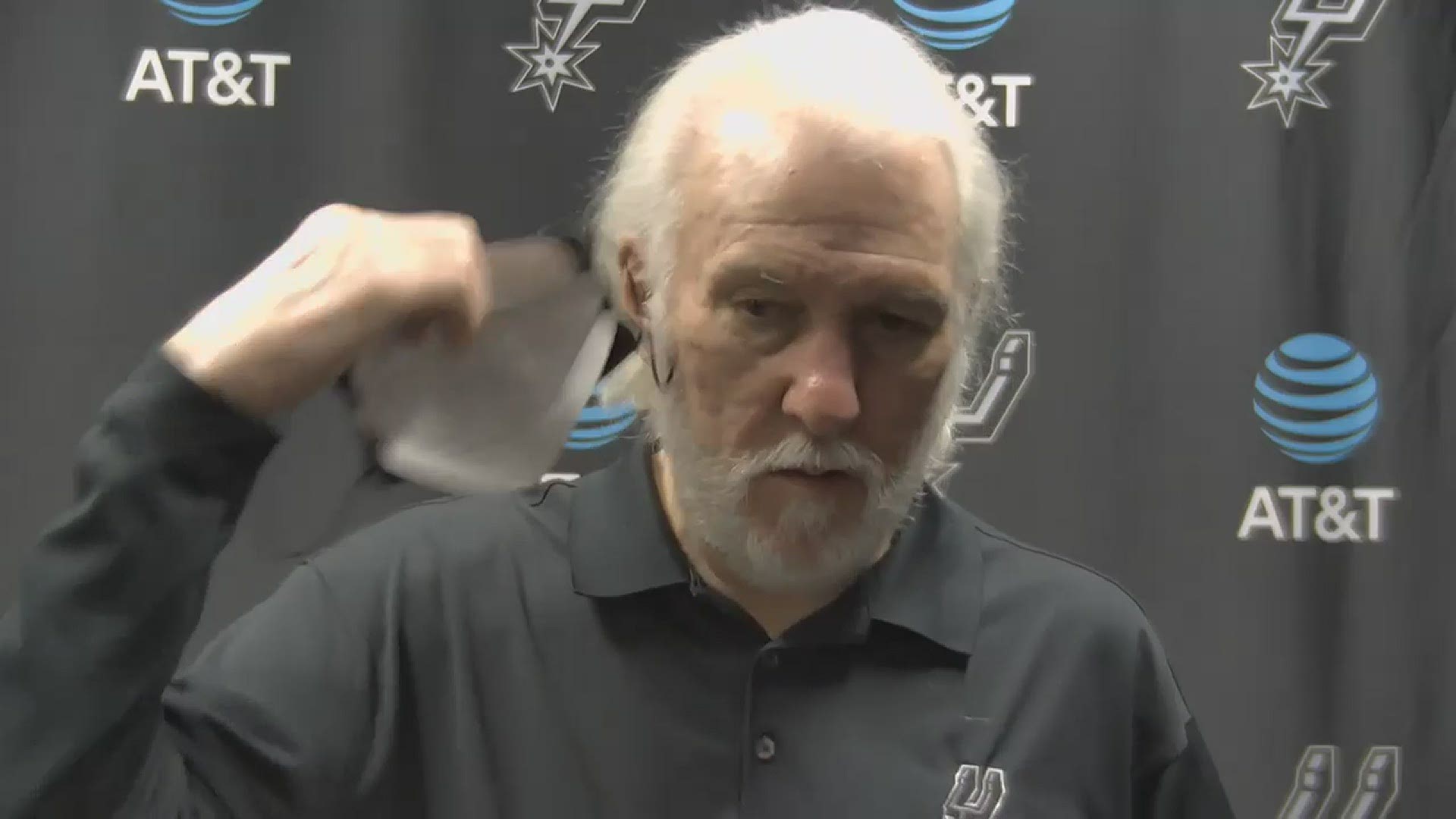 SAN ANTONIO — The Spurs followed up one of their best games of the season with one of their worst, turning it over 19 times and losing 107-102 to the Oklahoma City Thunder.

The Spurs fell to 18-14 on the year after their last game before the All-Star Break, a disappointing result in a game they were seven-point favorites in even without key players. 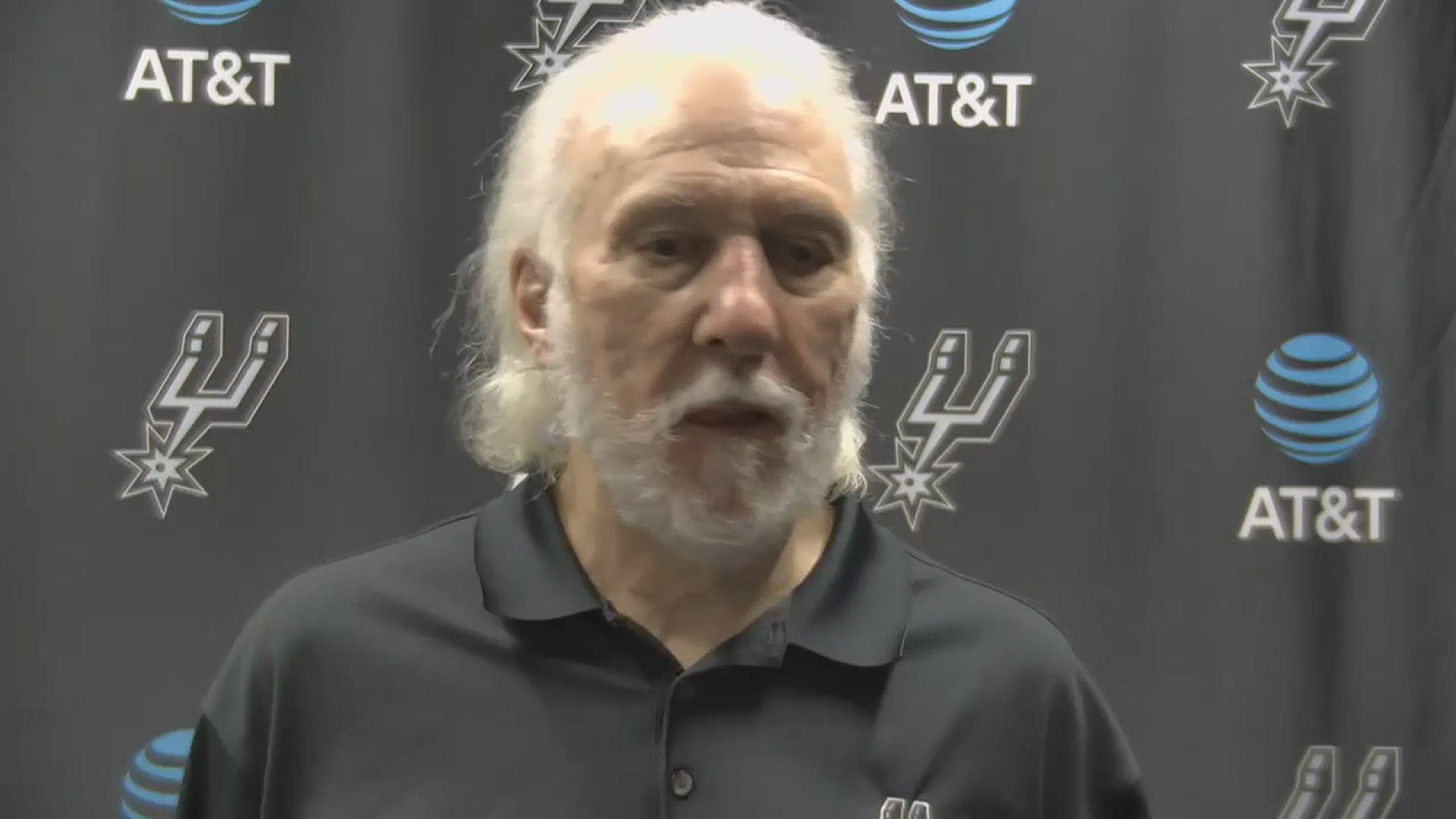 "But, our turnovers, a lot of them were just sloppy. I think it finally caught up to us, the injuries and the COVID in this first half of this season. I think these guys have done a tremendous job, I'm really proud of them," Popovich said.

Patty Mills also offered a look at the big picture after the disappointing loss.

"For us to go through the adversity that we've had, with obviously not only injuries but the COVID protocols, it does take its toll," Mills said, "It's not any excuse obviously, it's just the reality of the basketball lifestyle at the moment, and we've gotta find ways to be able to get through it."

"You just can't ride the highs too high and the lows too low, because there's too many games, there's too many opportunities that are coming up, and there's a game every other day, so you've got to move on to the next one no matter if it's good or bad," Mills said. 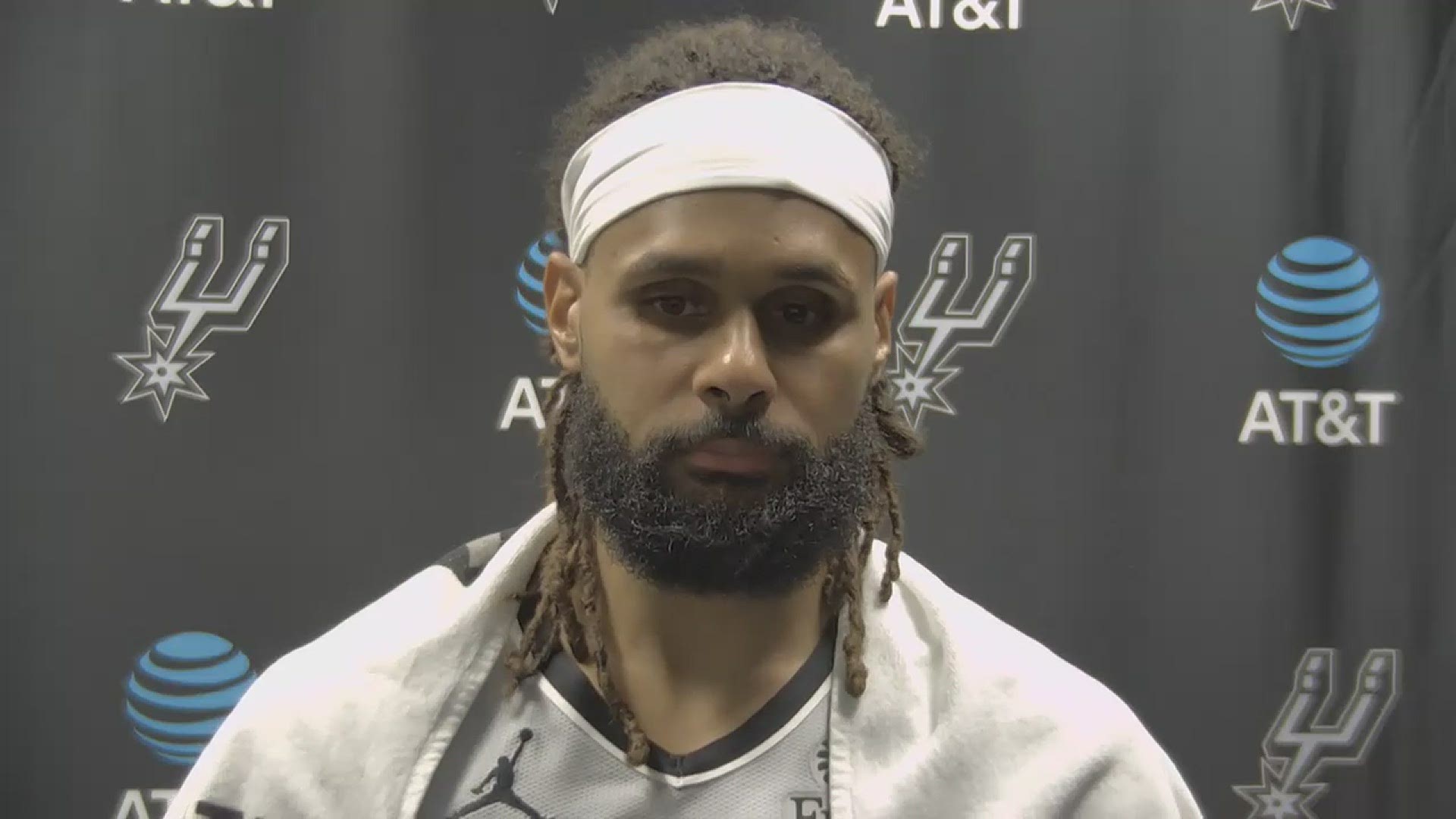 Dejounte Murray came into this game still thinking about the result of the previous game against the Thunder, a buzzer-beating loss in their first game since missing a week due to coronavirus, without DeMar DeRozan and four other key players. San Antonio had gotten into a bit of a groove after that, with Murray and DeRozan combining for 17 assists and just one turnover. In the rematch against OKC, however, they had 13 assists to nine combined turnovers.

"It sucks, I wanted this win, we wanted this win, but it's the NBA and they came and won the game," Murray said, though he said he wasn't going to let it keep him upset during the time off.

"I'm going to see my daughter, so, I get to be with my baby girl, so I'm not going to dwell on it and bring any negative energy to my child." 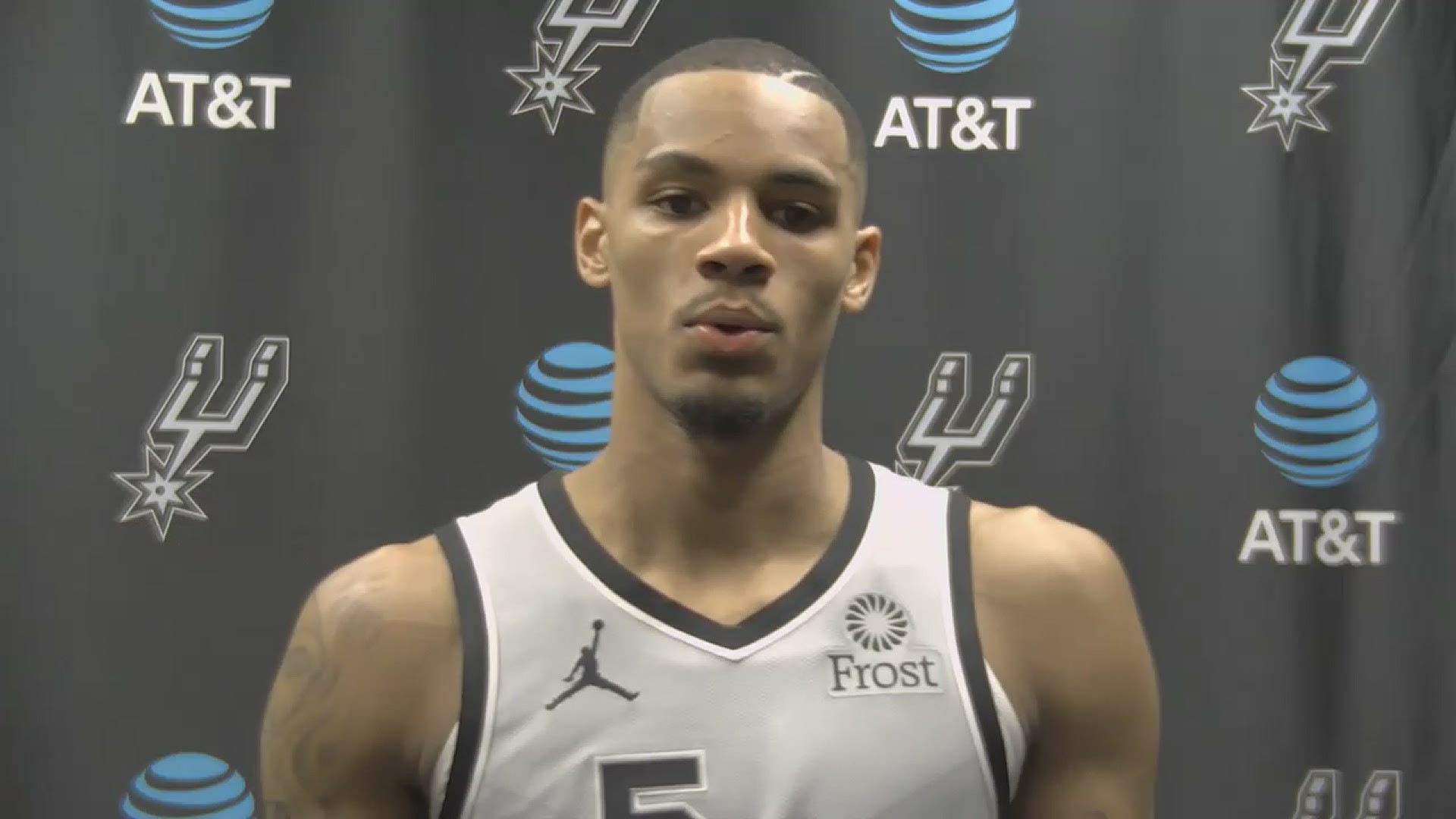 Murray and Mills said that the break would be about resting up for a second half schedule with 40 games in 68 nights.

"Brutal schedule, and it is only going to get much, much worse in the second half of the season," Mills said.

The Spurs struggled as shorthanded as they were, but they also got to see encouraging play from guys who hadn't gotten much opportunity to showcase their talents earlier in the year.

"I couldn't be more proud of our guys that were able to step up and really make an impact straight away," said Mills, who mentioned Luka Samanic, Trey Lyles, Tre Jones, and Keita Bates-Diop. Those guys are playing more confidently, and reinforcements are coming, which is good, because the Spurs will need as many able-bodied competitors as possible after the break.

"We're hopeful we can get everybody back so we can be a little bit deeper, a little fresher, because our second half is tougher than the first half with all the games we're gonna have to play," Popovich said.

Luka Samanic started the final period with a steal, then found Keldon Johnson who drove and earned free throws. On the next trip down, Samanic caught at the arc and drained a triple. He forced a miss inside, then got a piece of a layup attempt.

Luka Šamanić from a few feet behind the line 👀 pic.twitter.com/ImFaSZUc3F

San Antonio's turnover struggles persisted, and the Thunder went on a 7-0 run to reclaim the lead. Dejounte Murray looked like he was going to lose the ball, but maintained control and hit a smooth floater.

The Spurs turned it over for the 17th time, then gave up a dunk and a three on assists by SGA before he snaked in for a layup to make it 95-89 with 5:45 to play.

DeMar DeRozan pulled up in mid-range, and on the other end Lonnie Walker IV slapped a layup attempt away. A defensive lapse let Lu Dort get to the rim, but Trey Lyles answered with a slow-motion attack, finishing with a eurostep. After a bizarre pass attempt and steal by Murray, DeRozan worked his way back to the line to make it 97-95.

The Spurs forced another miss, but DeRozan couldn't convert in the post. On the other end the Thunder got three chances, and made the third. Keldon Johnson answered with a logic-defying layup to make it a two point game.

Patty played the best defense he could against Gilgeous-Alexander and stayed in front forcing a tough three, but he hit it. San Antonio coughed it up again, but the Thunder gave it right back and DeRozan dunked it to make it 4. The Spurs fouled, SGA converted, and it devolved into the foul game. They lost 107-102.

Spurs coughed it up 19 times

Lonnie Walker IV opened the second half with his third triple of the game, putting the Spurs up 14. OKC went on an 11-4 run after that with SGA and Lu Dort pushing the pace, so Pop called timeout up 7.

San Antonio turned the ball over and struggled from the floor when they did manage to get a shot. Isaiah Roby crammed a vicious dunk at full speed to make it 70-68 Spurs, forcing another timeout.

Trey Lyles busted out an impressive series of post moves, splitting a double team on the block and finishing a reverse around a third defender.

Out of that timeout, San Antonio turned it over for the sixth time to just three made baskets as the Thunder took a lead.

Drew Eubanks hit a jumper from the baseline, then forced a miss inside.

Patty Mills caught at the arc and drained a three, and after another stop he pulled up in transition and ripped the twine from deep to put the Spurs up 78-73 on an 8-0 run.

OKC went on a run of their own to cut it to one, as Mills kept shooting from deep but went cold. Drew Eubanks hit Keita Bates-Diop with a bounce pass for a cutting dunk, and SGA answered on the other end.

In the final seconds of the quarter Mills drove and drew a foul, hitting both to put the Spurs up 84-81

Patty Mills opened the period with a driving floater off the glass over a taller defender, then Dejounte Murray swiped a steal and laid it up and in to give the Spurs a lead.

Dejounte is gonna take that from you pic.twitter.com/AdVF5d0Zk6

Keita Bates-Diop found a finish inside, then Luka Samanic put back a miss before KBD found him cutting for a layup on the next trip down.

KBD showcases some pick and roll playmaking, feeds Luka for a layup pic.twitter.com/wPJkix2JeI

Shai Gilgeous-Alexander drove in for an off-balance finish, then whipped a pass to the corner for three to cut OKC's deficit to six. Lyles poked a hand in to create a turnover, then finished a transition feed from Murray. Murray hit another mid-range attempt, but SGA answered with a driving and-1 reverse.

DeMar pump faked his way to the line for two free throws, then Dejounte found Lonnie Walker IV for another triple to put the Spurs back up double digits.

DeMar got called for a foul, then a technical. He dribbled the clock out and whipped the ball over the defender's head for a layup to give San Antonio a 61-50 lead at the break.

Trey Lyles picked up where he left off in the previous game, swishing a corner three and cutting for a layup off a feed from Jakob Poeltl.

Trey from the corner 👌 pic.twitter.com/NajaOoDUNe

DeRozan scored in the post, then found Jakob Poeltl for a tough scoop. Dejounte Murray drove in for a layup, then DeRozan found Lonnie Walker IV on the wing for a three.

Jakob Poeltl stuffed a shot, then Murray finished a tough one high off the window in transition to tie it at 16.

Jak with the block, DJ off the window pic.twitter.com/2x7y86TF7s

Keldon Johnson scored free throws off the bench, DeRozan hit from mid-range and so did Johnson, but OKC hit a few triples to build a four-point lead. DeRozan came up short on a short shot, but grabbed the board and popped it in.

The Spurs are coming off one of their biggest wins of the year, but they're definitely still not happy about losing to the Thunder a week ago at the buzzer.

"We owe them, OKC, we owe them. It's really important to get this win, mainly I'm a competitor, I want to win, they beat us last time, so I really really want this win," Dejounte Murray said. 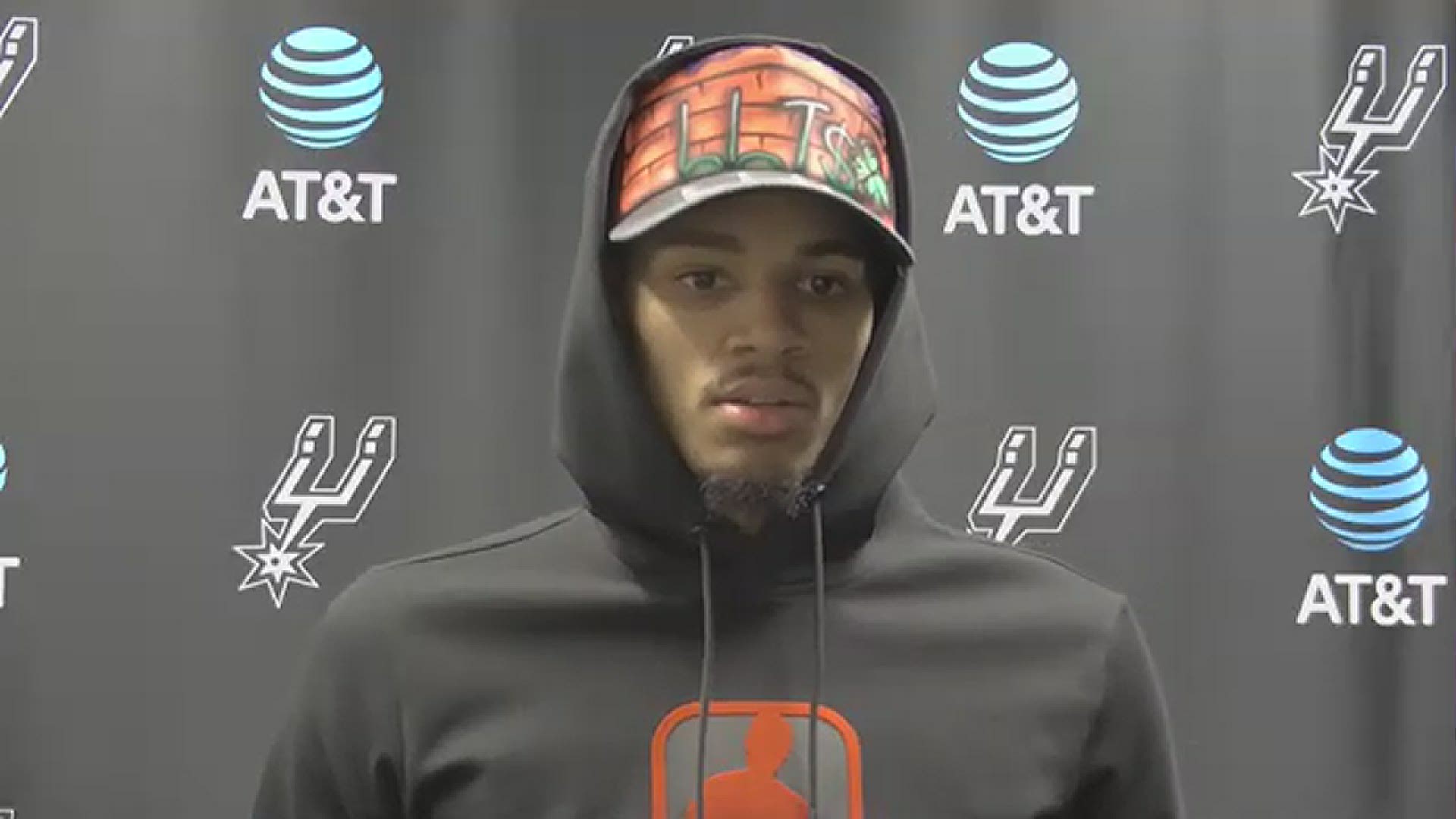 San Antonio is currently 18-13 with just a game to go before the All-Star Break, when they'll have an opportunity to make sure Derrick White, Devin Vassell, and Rudy Gay get back healthy after missing time due to coronavirus.

LaMarcus Aldridge will miss his second game in a row due to a stomach illness.

Keldon Johnson will play his second game back after missing time due to coronavirus health and safety protocols. Before the game, Coach Popovich said Johnson deserved to make the Rising Stars team, and is "happy as hell" for his second-year player.

"It really makes him feel good that his efforts have been applauded, and rewarded, and noticed, so that's great," Popovich said.

The San Antonio Spurs demolished the Knicks 119-93 with a strong second half, extra impressive on the second night of a back-to-back set.

Ten players scored in double figures, led by Trey Lyles who put in a season-high 18 points. Second-year player Luka Samanic scored a career-high 14 points, and Dejounte Murray had an efficient 17 and 6 assists. DeMar DeRozan had 10 points and 11 assists as San Antonio put up 31 assists to just 8 turnovers. The team made a season-high 18 triples, and scored 68 points in the second half on tired legs against one of the better defensive teams in the league.

"I think it was an impressive win on a back to back, tough loss last night and they just keep on truckin," Popovich said after the win. "They should be very pleased with their effort, for a while, right, another game on Thursday. For now, enjoy that defensive effort, transition, rebounding, loose balls, it fueled a lot, we had a lot of people participate."