Both teams look different going into a win-or-go-home contest, and Ja Morant and DeMar DeRozan headline the game's biggest matchups. 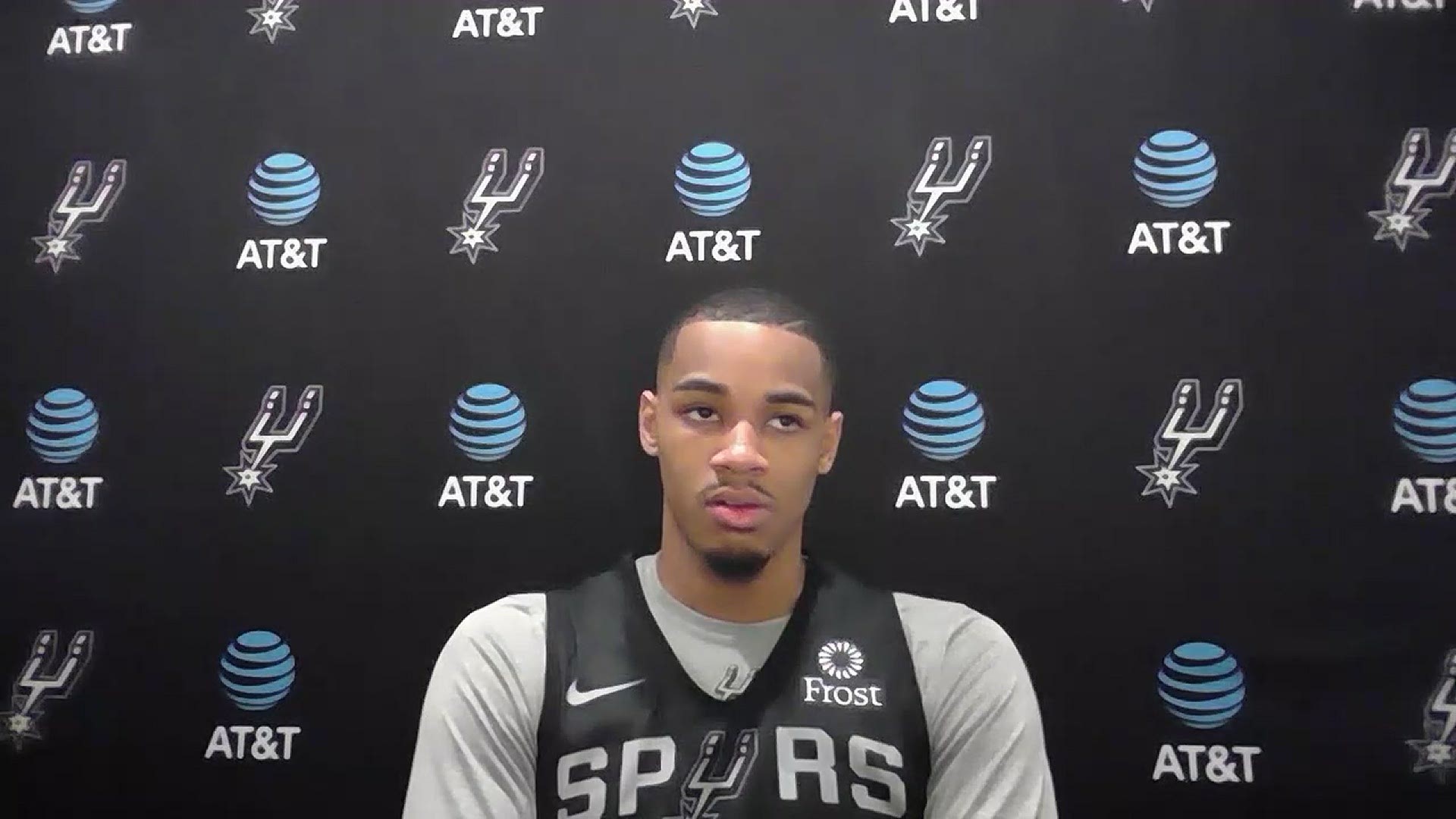 MEMPHIS, Tenn. — The Western Conference half of the NBA's play-in tournament begins Wednesday evening as the Spurs face off against the Grizzlies with a chance to extend the season by at least one more game.

The winner will take on whoever loses in the late game between the Lakers and Warriors for the right to become the eighth seed.

Before the Spurs can think about that they have a win-or-go-home game in Memphis, so with that in mind, here are five things to watch that could decide who wins, and who goes home.

Changes for both teams

The Spurs and Grizzlies opened the season against each other, then played two games in a row on January 30 and February 1. Both teams look a bit different since.

The last two starts LaMarcus Aldridge made as a Spur came against Memphis. He spaced the floor pretty well and didn't bog down the offense in the post, but his pick and roll defense was a weakness that Ja Morant exploited in those three games.

Aldridge got hurt in that last game, missed a decent chunk of time, and when he returned, the Spurs felt comfortable rolling with Jakob Poeltl as the starter. Poeltl finished the regular season third in the NBA in shot contests and third in screen assists per game, just behind Rudy Gobert in each category. He can have a huge impact in the paint on both ends, and that's where the game will likely be won.

Gorgui Dieng killed the Spurs in those last two games, averaging 17 points, 8 rebounds and 1.5 blocks while hitting 5-6 from deep. Since then he's switched sides, and could be important off the bench if Poeltl gets into foul trouble.

Dieng suffered a shoulder injury in his first game with the Spurs and has spent his time since getting healthy and learning the system. Drew Eubanks is still the first big man off the bench for Gregg Popovich, but the minutes have been distributed a bit more evenly of late.

Derrick White has grown to be an important two-way piece for the Spurs, but he suffered an ankle sprain in April and hasn't returned. San Antonio's schedule was tough down the stretch, but it's no coincidence the Spurs lost 10 of the 12 games without him.

San Antonio clearly misses his volume and efficiency from three, and he would have been another pesky defender to throw at Ja Morant.

Jaren Jackson Jr. missed most of the beginning of the year for Memphis, but the stretch big returned to average 14.4 points and 5.6 rebounds per game in eleven contests in April and May. He shot just 28% from three on 5.5 attempts per game.

Neither of these teams shoot the three particularly well. The Spurs are dead last in the NBA for threes made per game, and both San Antonio and Memphis shoot below league average at around 35%. Both of these teams have stars who prefer to drive, and the numbers show that.

Memphis gets nearly 50% of their points in the paint, the highest percentage in the league. Ja Morant's pick and roll ability is a driving force. The second-year stud shot over 60% on 364 attempts in the restricted area right at the rim. On his nearly 600 other shots Morant hit about 35%, and he's barely above 30% from three-point range.

In the first three games Morant had his way attacking downhill in pick and roll with a full head of steam. His defenders went over screens, though Memphis makes it difficult to go under. Ja either used his otherworldly finishing ability at the cup or found teammates for open looks in dirty areas.

Dejounte Murray will be the primary defender on Morant, and Poeltl will anchor the defense. If those two can invite jumpers from Morant while containing his drives, other defenders need to stay home on shooters to prevent anyone else from heating up.

Kyle Anderson had made 82 three pointers in the first six years of his career, but Slo-Mo clearly worked on it in the offseason and made 94 this season on 36% shooting.

Film from the first three games shows defenders above the break helping at the point of attack, leaving shooters open a pass away when in reality Morant doesn't want to shoot from there anyway. The Spurs will need to play disciplined team defense, force Ja to prove he can hit the jumpers, and not give the more capable shooters a chance.

Dillon Brooks is a volume scorer for this Grizzlies team, but he's also a versatile and pesky primary defender. He's also spent more time on DeRozan Island than just about anybody, and done a solid job.

According to the NBA's player tracking data, Brooks guarded DeMar DeRozan for about 15 minutes of game time this season, the third most for him behind only Damian Lillard and LeBron James. That sampling of superstar talent in vastly different bodies shows how much Taylor Jenkins trusts his Swiss Army knife

Brooks gave up just 15 points on 4-8 shooting to DeRozan in those 15 minutes, denying him the ball and forcing it out of his hands. DeMar only drew one shooting foul, a strength of his that he uses to keep defenses off balance.

On one hand, DeRozan could use Brooks' aggressiveness against him by baiting him with pump fakes. Brooks also guarded Steph Curry in the final game of the regular season, and he was a game-changing force until he fouled out.

On the other hand, playoff whistles might reward physical defense more than foul drawing. DeRozan's bag is deep, but we've seen Brooks take him out of his element already this year, and when that happens, it can take the Spurs out of their element.

RELATED: On DeRozan Island, DeMar is getting the pineapple first when it matters most

If DeRozan can't win that individual matchup, other Spurs will need to create offense. Dejounte Murray will be expending a lot of energy guarding Ja Morant, so Keldon Johnson and Lonnie Walker IV will be key as secondary playmakers regardless of what DeRozan does against Brooks.

Brooks is also averaging 20 points per game in his last 10 games, but he's shot under 50% in each of them. He's a streaky shooter who San Antonio can probably sag off of to start, but shouldn't let heat up.

RELATED: BIG FUN POD: A postseason primer ahead of the Spurs-Grizzlies play in game

The Grizzlies are a young and rebuilding team, but the grit and grind ethos lives on. Memphis had the seventh-best defense in the NBA this season, allowing just 110.5 points per 100 possessions.

They recorded 9.1 steals per game and scored 15% of their points in transition. Both numbers are the highest in the league. The Spurs on the other hand turned it over 11.4 times per game, second fewest in the NBA.

Limiting transition isn't just about taking care of the ball, it's about taking good shots and forcing the opponent to take the ball out of the bottom of the net and inbound it against a set defense.

A point of frustration for Spurs fans throughout the season may become a true differentiator in this, the most important game of the year.

The Grizzlies are a lot like San Antonio in a lot of ways, but the biggest difference might be experience. Coach Pop came into the year with four veterans on expiring contracts, and outside of LaMarcus Aldridge, the others stuck around and played high-leverage minutes.

There was valid criticism about not getting his young guys enough run to see what they could do and get them comfortable over the course of the 72-game season, but that's over now.

In the playoffs, and especially in a game 7 atmosphere, you want guys who have been there before. Simply put, San Antonio has those guys and Memphis doesn't.

With 90 such contests under his belt and 1,441 minutes played, Patty Mills has more playoff experience than the entire Memphis squad combined. The longest-tenured Spur has looked gassed and been stuck in a rough slump for the last month, but he rested the final game and brings valuable leadership that the team needs in moments like these.

DeRozan has played in 58 postseason contests, a significant number of them against LeBron. Murray, Poeltl, Gay, Walker, and Dieng all have playoff experience. Johnson and Eubanks along with rookies Devin Vassell and Tre Jones are itching for their first shot.

Games like these can come down to which team is more comfortable, calm, and confident. San Antonio's vets not only provide that in the way they play individually, but they can have a stabilizing effect on the whole group.

A year full of ups and downs where the only constant was inconsistency comes down to 48 minutes, with the winner advancing and the loser going home. Don't be surprised if Pop's veterans wind up helping.