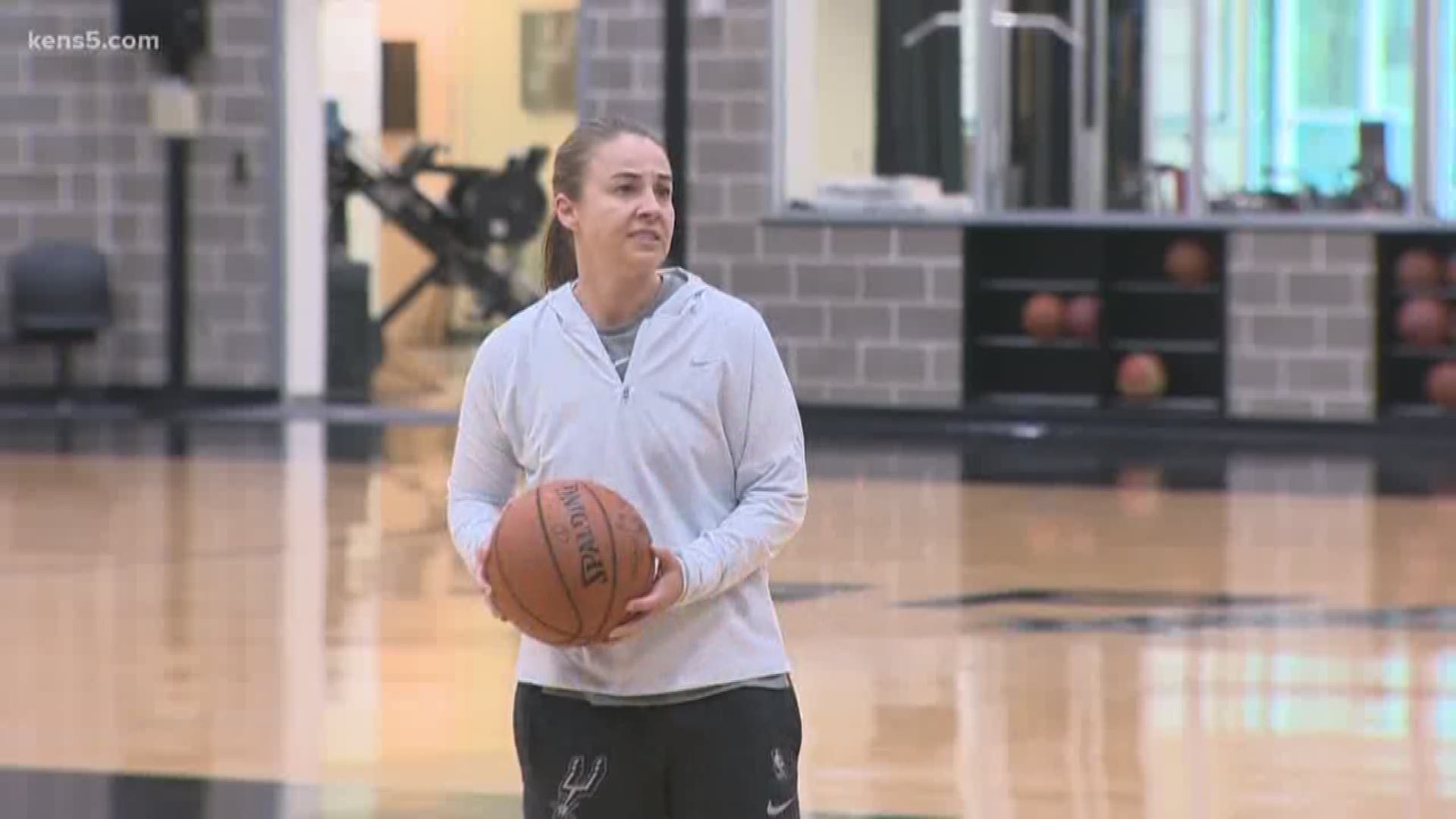 The noise heard coming from the Spurs’ practice facility Wednesday was the sound of trailblazing Becky Hammon shattering another glass ceiling.

An assistant coach with the Silver and Black since 2014, when she ended her stellar career as one of the best players in WNBA history, Hammon was promoted by Gregg Popovich to fill the coaching position vacated by James Borrego.

Borrego left the Spurs last month after he was named head coach of the Charlotte Hornets. Hammon, 41, will move to the front row on the team’s bench, alongside Popovich and assistant coaches Ettore Messina and Ime Udoka, during games.

Hammon, one of six assistant coaches on Popovich’s staff last season, spent her first four seasons as an assistant in the row behind Popovich, Ettore, Borrego, and Udoka.

It should go without saying, but we’ll say it anyway just to be clear: Kudos to Gregg Popovich for having the vision to hire Hammon in the first place.

The Spurs have been one of the model franchises in American pro sports for the past two decades because Popovich has never hesitated to think outside the proverbial box. And let’s face it: Hiring a woman to coach in the NBA still goes against convention in 2018.

In Hammon, Popovich saw a former player with a high basketball IQ who had the potential to be a good coach. Period.

That Hammon is a woman was irrelevant in the calculus.

Hammon made history in August 2014 when Popovich hired her, becoming the first woman to land a job in the NBA as a full-time assistant coach. It didn’t take Hammon long to prove she had the chops to coach NBA players. She made history again in July 2015 when she became the first female coach to serve as a head coach in the NBA Summer League, leading the Spurs to the Las Vegas title.

That success prompted talk that Hammon someday could become the first female head coach in the NBA. She interviewed for the Milwaukee Bucks job last month and was a candidate for the men’s basketball job at Colorado State, her alma mater. Hammon withdrew her name from consideration for the CSU position in March. She also turned down an offer in the spring of 2017 to coach the University of Florida women.

Hammon starred in the WNBA as a point guard for 16 seasons, the last eight with the San Antonio Stars, before retiring in 2014. A self-described “gym rat” who was born and raised in Rapid City, S.D., Hammon quickly became a fan favorite in San Antonio with her grit, outstanding play and unbridled passion for basketball.

In an open letter he penned last month for The Players’ Tribune, Spurs center Pau Gasol dispelled the notion that Popovich hired Hammon just to be innovative.

"Would you really expect Coach Pop to develop his staff any differently than he develops his players? Of course not," Gasol wrote. "Pop's only standard for doing anything is whether it'll help us in just one way . . . and it isn't getting good p.r. It's getting W's. And getting those W's The Spurs Way."

After watching Hammon coach and interact with Spurs players the past four seasons, I believe it’s only a matter of time before she breaks another glass ceiling.

Gasol gave Hammon a ringing endorsement in his open letter for the Players’ Tribune.

Popovich told the New Yorker’s Louisa Thomas this spring that "it's going to take somebody who has some guts, some imagination, and is not driven by old standards and old forms" to hire Hammon.

The sound of the glass breaking will let us know when that moment comes.